Got it done over the weekend on my first deer, a really nice white tail! For some reason I have had good beginners luck in hunting. Gotten elk, ducks, and turkey on my first hunts. Of course, inevitably my next hunts are always a struggle as the law of averages kicks in!
Anyways, I chased deer the first time last year for one day in western Kansas for a mulie. This year I decided to stay closer to home and get after a white tail. I knew a property I turkey hunted quite a bit had a lot of deer, but I didn’t know the quality of bucks until I put some trail cams out. And wow there are some big ones roaming around!
Come summer I set a ladder stand up on a soybean field edge at a pinch point. Nice and secluded from the road and requires some bushwhacking and crossing a stream to get to, so other hunters on the lease are less likely to get that far in.
In September I sat in the stand a handful of days with the muzzle loader. Saw quite a few does and one forkie. With an elk hunt on the horizon, I wasn’t pressured to put meat in the freezer yet so I held out for a buck. Alas, the only buck I saw was the forkie. I kept getting mature bucks on camera but often at night, guess that’s why they grow old!
My elk trip came and went and struck out. So, come rifle season I was in need of some meat.
I got back in the stand the first day off I had during the short rifle season. Fortunately no one had hunted that section for 2+ weeks. I cursed as a nice bucks ran across the road in front of me just as I was about to pull into my parking spot. There went my nice buck I thought.
I got into the stand and waited for the woods to wake up. I heard some rustling up the hill my stand sat at the bottom of, too dark to see. Probably a raccoon or other critter. Light slowly started to illuminate the woods. About two minutes after first light I catch a set of antlers in my peripheral vision perfectly sky lined. Immediately I recognize the size and know it’s a shooter. In the woods it was a tad dark to see exactly how he was positioned, but a flick of the tail showed me he was facing away, but had turned his head sideways. I got him in the scope, not bothering to range it knowing he was close. There was a small amount of brush obscuring him and it was a tad dark so I turned my scope magnification up a tad to make sure I had a clear view. I waited and he took one step and turned broadside. I took some deep breathes and the 308 barked, he immediately ran behind a bush and crashed. I couldn’t see him on the ground but the way he fell seemed like a dead deer to me. I gave it 15 minutes to be totally sure and began the longest 40 yard walk ever.
I got to the spot he was standing, could see the ground torn up but no blood. Somewhat alarmed I started in the general direction he had ran and saw bright red blood. Followed it two more steps and there he lay. He had run about 15 yards. Overwhelmed with gratitude I thanked Mr Buck like big fin, took pictures, and drug him 59 yards out into the field edge. Gutted him pretty cleanly for a first attempt (I thought), helped by the memories of countless YouTube videos and my meat eater how to gut a deer bandana. The federal trophy copper 150 gr absolutely destroyed the lungs and heart. Loaded him on my deer cart and pushed him the half mile back to the truck. Dropped him off at the processor, gutless and headless weighs 129 lbs. Should be a good amount of venison for me and my family! 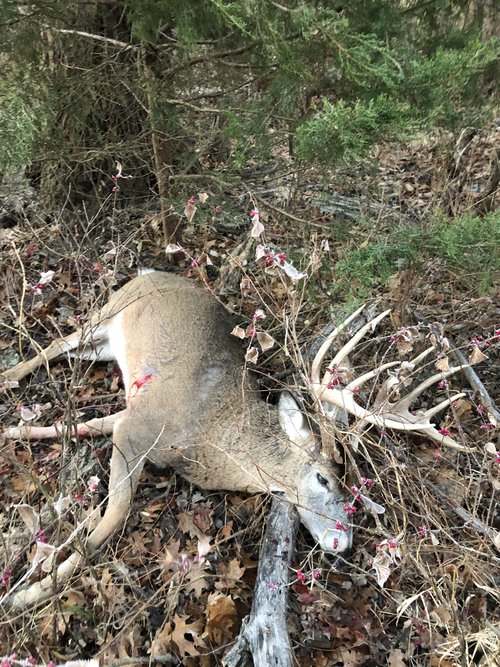 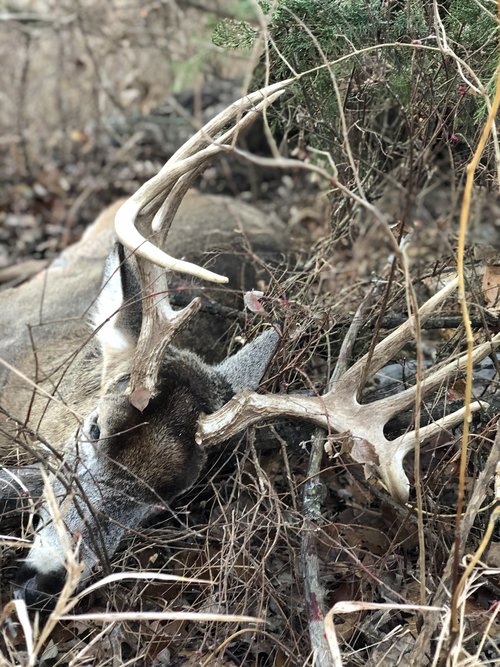 Congrats on a great deer!

Congratulations, that is a great looking buck!

Very nice,gonna be hard to top that one.

Great deer, I hope to get one like that someday.....have not tired for the mighty whitey yet!
Congratulations!

Awesome deer. I know you said he was a "shooter" but when I saw that first pic...WOW!

Great job first deer or not!! Not all will be that awesome.

Congrats on a great deer!

Luck is the residue of design.

great buck!
You must log in or register to reply here.

Whitetail & Mule Deer bucks - what do they score? Give me a guess.
2 3