Northern Ontario bear hunt I had a large sow with semi weened cubs sneak up behind me on a rainy day while I was on the ground sitting on my butt with my gun on my lap just scouting. I luckily had my camera and when I heard a stick crack in the distance behind me, I turned it around to look through it to see what was behind me rather than moving my whole body. At that moment I smelled a bear and had a sow standing over my shoulder tugging at my shoulder of my sweatshirt! She hovered above me and even though my heart dropped into my stomach, I did nothing but softly talk to her and let her know what I was without freaking out and triggering an unnecessary attack. It worked! She continued to study me and learn that I wasn’t a threat and she took off for cover. Whew! 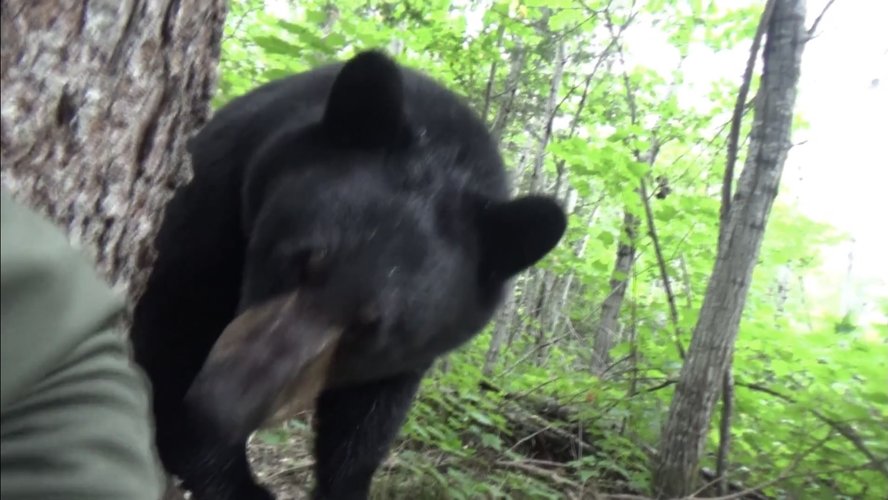 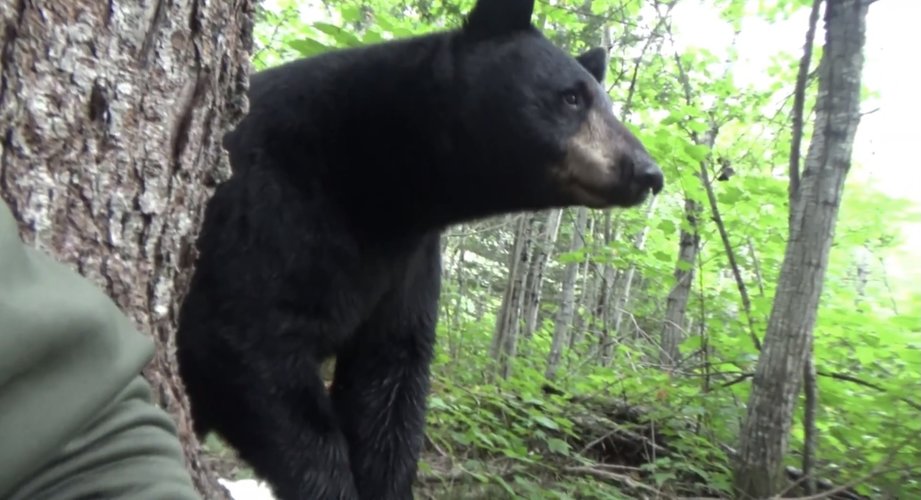 That’s pretty crazy. I had this little guy stick his nose in my window while I was sitting in my truck making a sandwich. My dog started growling before I noticed him and I almost stuck my pistol up his nose before he ran off. 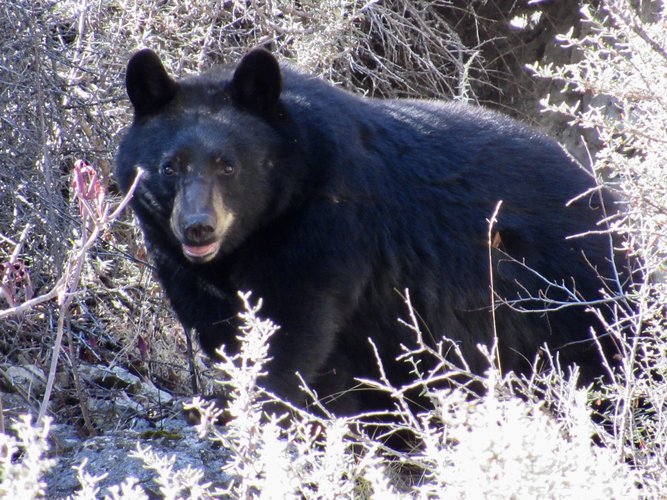 That’s awesome! They are definitely sneaky and curious

Had one walk into the cabin when the kids were watching TV...... they thought it was the dog and didn't even flinch. We were loading car up to head home and I about shit my pants when I saw him go in......

Nothing like that. Shooing them away before dinner each night was a ritual when I was at Philmont as a kid. Seen a few 20-50 yards while fly fishing in North Carolina.

Wow, that is an incredible experience, can't believe you got it on camera!

You've got nerves of steel.
C

In 2018 I had a blind set up abutting a logging road, with me facing into the woods. I heard a huff out the left window and saw a sow with a cub maybe 10 yards away. Readied the gun.

A second cub came to her, so I thought she smelled me and would be on her way once she had both cubs. But she didn't; she just stood there, and I didn't understand why. She then walked up to my blind, walked past it rubbing her body on the side. I was prepared to shoot if she so much as twitched, but she didn't.

Unknown to me, a third cub had run past my blind before I saw her, and she was going to retrieve it. They came back to meet the other two cubs (who had stayed behind), and assembled as a group of four, calmly walked away.

Location
Somewhere in the camper!

How many times did you have to launder those pants!
P

That is why its important to have your camera at the ready anytime your away from the truck. Great photo. I can feel my heart race just thinking about it. Not sure i could have kept my cool not to jump and shoot. Nerves of steal buddy!!

I climbed up in a tree and caught a cub once. Is that close enough?
C

buffybr said:
I climbed up in a tree and caught a cub once. Is that close enough?
Click to expand...

Nevermind that. What we really want to hear is what happened to you when you came down

Never that close. Here's one that walked up to me at work one day. 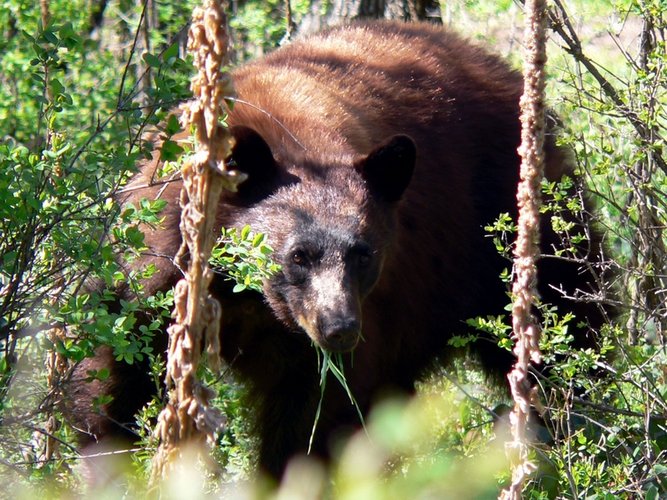 Last year in Rocky Mountain National park I was sleeping in my vehicle outside the park (wasn’t sure what day I would get there, so no accommodation booked until the following evening). So, I’m there in my sleeping bag, seat fully reclined and fast asleep. About 3am the car door swings open and a bear sticks it’s head in literally over my body just lying there. Bear sees me and backs out standing on it’s hind legs looking down at me. Instinct kicks in and what strange instinct it was - I bark at it like a dog and it runs for cover. I won’t forget to lock the car in a hurry haha

I spooked a bear up a tree once. Walked under the tree and the bear looked down on me,started growling and backing down the tree. Pretty certain my time would have been competitive in the NFL Combine.

CubSlayer said:
Nevermind that. What we really want to hear is what happened to you when you came down
Click to expand...

When I was working for the Forest Service a black bear had attacked a member of one of our trail maintenance crews. I was in the area and I met our Law Enforcement Officer and a Sheriff's Deputy at the trailhead.

The LEO gave me his AR and we headed up the trail. We got to the attack scene about an hour after the attack, and two of the crew were up in one tree and 50 yards up the trail the other member was almost at the top of one of the tallest spruce trees around. He had been bitten in his leg and feet several times. He said every time he called for help the bear climbed up the tree and bit him.

When the LEO, the Deputy, and I got to that tree, the bear charged us and we all fired at the same time, killing it. At that time we were most concerned about the injured man so we just checked that the bear was dead.

A while later after we got the injured man out of the tree and other rescuers arrived, we moved him to a clearing where a helicopter from Yellowstone NP could take him to the hospital.

With the injured man taken care of, I went back for a closer look at the bear. It was then that I saw a young cub run through the brush and it went up a pine tree. I immediately felt sick that we had killed the cub's mother. The cub was only a few months old and I was afraid that someone would say that the cub wouldn't survive and want to kill it.

So I went up the tree after the cub and eventually was able to grab a hind leg and pull it out of the tree.

When I got down from the tree, the cub immediately started biting and scratching my hands and arms. I was able to hold him by the back of his neck with one hand and his two back legs with my other hand. If I let go with either hand that end of the cub would again bite or scratch me. His bites felt like my hand was in a vise with nails in the jaws, and he knew how to scratch with the claws on his hind feet.

I held him that way for about an hour when the FWP bear biologist got there with a 5-gallon plastic bucket that we put the cub in to carry him out. FWP brought dogs in the next day and found another cub. I later talked to the bear biologist and he said they took the 2 cubs to a wildlife re-hab center in Helena and they released them back in the woods two years later.

Anyway, when my boss heard the story and saw my scratches and bite marks he made me get checked out by a doctor who gave me a tetanus shot and a prescription for some antibiotics.

The bites and scratches that the crew member got from the mother bear were much more severe than mine, but he was treated and able to go back to work, and Schnees or one of the other boot stores in Bozeman gave him a new pair of boots.

Long story, but I can truthfully say that I caught a bear.

Once while archery deer hunting a sow and 3 cubs came under my tree stand. 2 of the cubs started up the tree that I was in. They were only up a short ways when the mother smelled a rat and shoed them down the side of the mountain. It was pretty cool.
You must log in or register to reply here.