Another great day in the field

It was a lot of work but weather was perfect (cool with almost no breeze) and pheasants were holding unusually well. Not well enough for my Britt though. I hunted Lab Ellie instead because she works close and birds were in heavy cover. She was usually close enough to see when she was birdy. When I heard her stop moving in the cattails, I knew she was on point. We pushed up a lot of birds today but tough to get a shot in that crap. Shot the first two in thick cattails and as usual Ellie made unbelievable blind retreives. And I mean totally blind. She couldn't see me and I couldn't see her. The second rooster was a fairly long shot and fell a good fifty yards away in the head high tulie jungle. After marking the bird with features on distant shore, I stripped off my vest and layed it down in case I needed to come back and start over. Meantime I hear Ellie crashing through the stuff. Somehow she knows a bird is down. I plow through slowly to avoid tripping. Ellie continues to work ahead a few yards. Suddenly I can here her tail whacking the tulies. Ah, she's birdy! "Get that bird!" She makes a quick zigzag and then I hear her stop. "Got him? Bring me the bird." I here her coming ... and snorting. I know she's panting with a mouthful of pheasant. And there she is barely visible in the tangle at my feet with a beautiful old dead rooster. Wow! That was bird #2 and limit is three so time to go back to the Jimmy and let the Britt have some fun. At the bottom of the hill below the car Ellie froze at a clump of large thick Russian olive. "She's got a hen trapped." This should be fun. I quickly look at my watch. How long can she hold that bird? After a minute she sneaks around the back side of one tree. I can barely see her in there, head down and locked up. Waiting, waiting ... Then she moves around a little further and freezes again. Waiting, waiting. Up goes the pheasant, it plows into the brush, and comes fluttering through right at me. A nice rooster! I had to wait on the shot to avoid blowing him up. Bang, and feathers fly everywhere. He spins sideways and one leg drops but he keeps flying. I shoot again and the second leg is dangling. I don't take the third straightaway shot. No point. He's headed into the grazed field and wherever he lands, he's not going anywhere. We'll find him. I look at my watch. Just over three minutes lapsed since Ellie first went on point. That rooster flew at least 250 yards before finally gliding to ground. Ellie marked him PERFECTLY. She ran straight to it. Never deviated a foot from line. He was dead of course. No better sight than seeing a black dog trotting back head up with a rooster in her mouth all lit up like a neon sign by the late afternoon sun. Good dog! Back at the rig I did the photo op and let Puppy out to pee. She wouldn't jump back in so I had to pick her up and carry her like a baby. She nibbled on my nose. "Okay, we'll go find you a bird." I drove to a spot on the north end where there's often sharpies. At the end of the draw she went on point in some tall grass between two Russian olive trees. I was in range so I waited. Up jumps a nice rooster and presents me with a piece of cake shot. "Sorry Puppy, I've already got three." The what-the-hell look on her face was priceless. You've had your fun. Time to go home.

Five shells for three roosters. One MUST be conservative taking shots on the refuges. There's no steel shells to be had anywhere. Not from Havre to Grand Forks. Rare to find any lead shells. Local store got in a small shipment of steel two days ago but all #2 or BB three inch twelve gauge. I can't see any sense in blowing up pheasants with those. 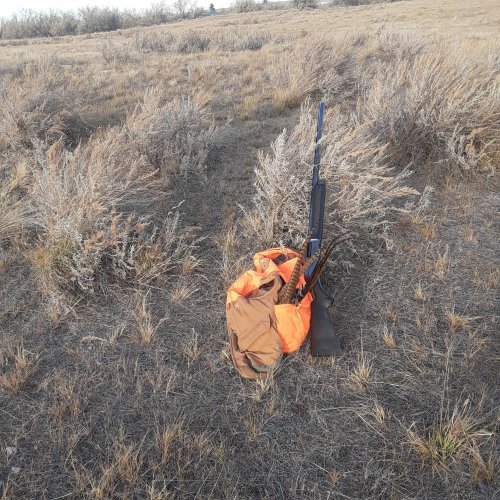 Sounds fun! I can’t wait to head to southern sask in December to chase pheasants

And again. Another shirtsleeves day. Weatherman called for 45 mph winds. Never came close to that. Hunted from shortly after daylight to dusk. No lunch, no water. Shot my three roosters in the last hour of shooting. Bagged the first double in a long time. Really reached out there for second bird. Saw lots of roosters but only four shots.

Congratulations on another fine limit of pheasants. Such weird weather for Montana.

I imagine that you soon will be eating two or three birds a day to keep the possession limit kosher. What is your favorite way to do camp pheasants?

I'm eating one tonight. Friends here will take a couple of frozen ones from time to time. I usually keep six on hand in the freezer and pick up my last couple the day I leave. Throw them on top in the carrier and take them home whole. That's usually December and they freeze quickly. One year they froze before I could get back to the motel. That way the grandkids can see what the birds look like. That'll be a few weeks down the road yet.

Weather is going in the crapper tonight. I'm taking the same friend deer hunting in the morning. Should take an hour or two to get his buck. A very nice whitetail buck was dead in the ditch on my way to bird hunting this morning. Not there when I came home tonight. Right in town I nearly hit a 5x5 whitey two nights ago when returning from bird hunting. He had his nose in a doe's butt so the rut is on. The dogs will be glad to have the day off. I'm only hunting them every other day this year and often alternating them during the day. Lab Ellie did most of the work today. She's really beat tonight.

congrats on the roosters and the double.
You must log in or register to reply here.

This is why you need a bird dog