26 Nosler. Who has one and what do you think about the caliber and performance

Don Fischer said:
First shot was 670yds and the second shot 30yds? You talking about the same animal?
Click to expand...

First three shots were at 670yds. The elk were on private land heading toward public. I was on a hillside and there were a lot of trees between him and myself that would have obstructed my view if I came down. I was trying figure a good way if closing the gap. It was day three of a five day hunt and supposed to rain for days four and five. I was quite a few miles down dirt and figured I would be limited to places that could be accessed from pavement for the next two days. It had been dead calm and it suddenly started hailing. The herd of elk went from browsing casually and dispersed to a tight group behaving a bit nervously. Then the cows just started jumping the fence onto public in a bit of a wave and heading to cover. Considering the weather conditions at the moment and in forecast I decided it was a shoot now or forever hold your tag situation. It got down to two cows and the bull still waiting to jump and the bull looked at them like “well I’m done waiting on you two” so he jumped fence to public and stopped to look back at them. I figured they were at 400-500yds and I knew my drop at 500yds was 30”. I held 8” over the back and fired. Then top of the antlers and fired again. That time I saw dirt kick up behind his back foot, so I quickly about two feet over the antlers and foot in front of his nose and fired again. As soon as I trigger broke I though “nooooo, I should have gone way more than a foot in front!” He reacted to being hit though. At this point the rain made my scope so blurry I couldn’t see well enough for a fourth shot before he made it to cover. I cleaned my scope lenses, closed my scope caps, and headed toward a different hill that would give me a better view of where they had disappeared. Sure enough I got back on the herd and circled downwind expecting him to either be down, or trailing the cows. There he was at 30yds. He was down but his head was up so I put one on the shoulder. The first hit(third shot) had been a gut shot and it exited. Like I said it had been dead calm. Between the excitement of it and being on the off side of the hill I hadn’t noticed that the wind picked up. It must have been blowing pretty hard as a 10mph crosswind at 670yds is only blowing me about 17”. Perhaps the bullet was hitting the pea sized hail. I don’t know. Had I not been able to see the impact of the second shot, I wouldn’t have hit him with the third. I don’t know what the firs bullet did to his insides because I did he gutless method, but the second bullet was rather devastating. I was also very blessed by God with a ceasing of the rain from that point until we finished hauling him the truck that morning. It started raining about the time we hit pavement and continued to do so for the entire day. 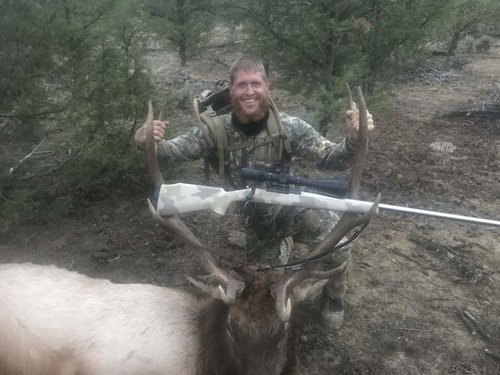 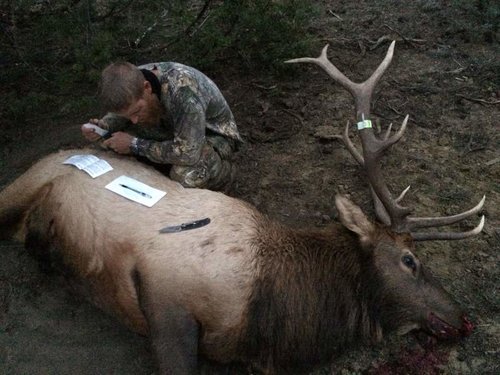 Bill
I just reread your post. You stated you thought you were a lot closer than 670. Did you not range the elk before shooting? Was this a hold over shot or dialing?
Click to expand...

Don’t own a range finder. Don’t usually shoot at animals past about 350-400yds. Holdover. It’s not the proudest method of take I’ve ever been a part of, but it worked out. I used onX to determine the range after the fact, and the 66” drop at 675yds makes the rough holdover seem to match the OnX range estimate. It was in that ball park, and I prefer not to go about it quite like that in the future. The ‘06 would have dropped 87” and I’d have propbaby fired two shots and wished for different circumstances. It was my first elk hunt, and they seem a lot closer than mule deer at the same distance! I was really just lucky and blessed. I had just pulled stakes and was going to move camp closer to pavement after hunting for the evening. It had taken me three days to find elk, and I wasn’t likely to be able to get back to that place again. After spotting them I assumed they were going to stay on private till after dark. The sudden change in weather seemed to change their behavior. Everything just worked out. I can’t claim that any skill played a role. At least no skill other than cycling a bolt really quickly.

The first thing I said to my dad after that was “I’m buying a rangefinder”
Last edited: Nov 1, 2018

Congrats on the bull! I’m glad you were able to recover the elk. A rangefinder is a great tool and has definitely helped me become a better judge of distance also.

Yeah, back in college I would guess and my buddy would pull out his range finder while we were shooting prairie dogs and I actually got fairly good. That was in flat open country and broad daylight. I’ve found that early morning and evening throws me off a bit, as well as elevation change and obstructed views. Compound that with the fact that it’s been quite a few years since we did that I’m not not nearly as good at these days. I was about 200yds wrong!

cahunter805 said:
Bill
That’s an interesting wildcat. I’ve always though a 6.5-280AI would be fun and especially now with Nosler making 280AI brass.

For your typical hunter with a hunting rifle yes 600 rounds will last. For people who like to practice and are comfortable I suspect at least 100 rounds a year are fired especially if they only have one hunting rifle.
Click to expand...

Back to the OP. I do think that .26 Nosler performance does deliver very good results. If you want a .26 Nosler you should get one. If it’s used, I would recommend making sure it’s cheap, because 600-700 rounds may be about all you get. If you just want that kind of performance you can get there or very very close with any of the above three cartridges and a 30” barrel. You will also get about 1200 rounds or more of barrel life. That’s a lot more cushion if you’re buying a used rifle. If you don’t want a long barrel, then you have to realize that not even a .26 Nosler is getting those numbers from a short barreled rifle. Nosler is using 28” barrels to get those numbers, and the larger the cartridge is compared to the bore, the more velocity it gains or looses with changes in barrel length. In other words, if you shorten a .26 Nosler by 2” you will lose more than if you shorten a 6.5-284 by 2”. The result is that if you compared a 6.5-284 to a .26 Nosler and they both had 24” barrels they would probably perform exactly the same.
M

I realize this is an old post, but just saw it this morning. The 26 Nosler has become my go to big game caliber in recent years. I have used it here in the US and in Africa with great results. Most of the time, I use one of my Blaser R8 barrels that I had made for this round.

mtmuley said:
I always get a kick out of the barrel burner comments. With care, hotrod barrels can last a long time. Even 600 rounds in a hunting rifle is a lifetime of hunting. mtmuley
Click to expand...

I don't shoot near as much as I used to but 600 rds through one rifle is a lot. Think about it, that's 30 20 round box's! If most peopleshoot that much that are not competative shooter's then they probably hit 600 by shooting a number of different rifle's. None of which hit 600 rds. Then the guy that only has one rifle likely doesn't reload and doesn't shoot near that many rds if for no other reason cost!

I wonder about the barrel burner's also. What constitute's a burned out barrel? Competitive bench rester might call a barrel burned out that won't hold 1/2" anymore! But the hunter actually doesn't need an 1/2" rifle. My 30-06, only one I've ever hunted with was given to me by a close friend when he died. He had it made for himself when he got out of the service about 1945. He shot far to many crossive primer's through it and didn't clean it near enough. Barrel is wasted, had a gunsmith look at it. Guess what, it still gives 180gr bullet's 1 1/4" groups and has kille three elk with that worn out barrel. Worn out? I though about having it re-barreled but the maker's name is on the barrel, Paul Jaeger. Lot of sentimental value there.
D

ImBillT said:
The first thing I said to my dad after that was “I’m buying a rangefinder”
Click to expand...

mtmuley said:
I do practice. I hunt with a .300 RUM. I have a Remington in .222 Remington that is for practice. mtmuley
Click to expand...

Smart man !
You must log in or register to reply here.