Early morning update. 4 huntable cows spotted before some weather rolled in. We backed out in case the wind decided to switch. I think we've nailed down our spot for the opener tomorrow. We're scouting other options the rest of the day.

Long day, but a good day. Story to come later

Nice work! What unit are you hunting? I'm in 37/371 and saw a massive bull today, but the only cows I saw were on private. Back at it in the morning!

adturn01 said:
Nice work! What unit are you hunting? I'm in 37/371 and saw a massive bull today, but the only cows I saw were on private. Back at it in the morning!
Click to expand...

We're headed to Gillette Monday to try and fill a few antelope tags. I'll get a good story typed up when we get home

jwatts said:
We're headed to Gillette Monday to try and fill a few antelope tags. I'll get a good story typed up when we get home
Click to expand...

Hurry up! I want to hear the story on this one!

I just dropped the meat off in Denver and am headed north. The antelope hunt has commenced. I'm hoping to make it there in time to help pack.

happy for you. congrats! great meat and fun.

Thanks. We're wrapping up on antelope today and heading south.

jwatts said:
Thanks. We're wrapping up on antelope today and heading south.
Click to expand...

@jwatts, you are just toying with us. Give us the details sir!! Good luck on the speed goats. Tell us about that one too.

We should be home Friday. That'll give you something to look forward to on the weekend

I know I owe everyone a story. I should have time to get pictures loaded and something typed tomorrow. Our whitetail season kicked off last week and I've been hauling this GSP all over creation tracking wounded deer.

So we left off the day before season. We got up early and made our way to the trailhead. We got there in time to slip in under the sunrise and glass up 4 cows. We watched until a storm started rolling in and the wind got squirrely. I didn't want to blow the place out so we backed out. We made our way to a few other locations to scout for a plan B. The weather followed us all day, so what better to do than go to the cabin, drink beer, watch antelope, and strategize for tomorrow.

By the time we came back through town headed to the cabin you could see snow on the mountains that wasn't there that morning. Later in the afternoon we got a text from a buddy of ours, Jonathan, that was headed down to meet us. The weather had him blocked from crossing a high mountain pass until the morning. We were going to drop him a pin on the trailhead and our glassing location, and he would catch up with us the next morning. We made the ultimate hunting lunch, the cooler sammich. We got the truck loaded, all of our gear in order, and got to bed for an early morning wakeup. 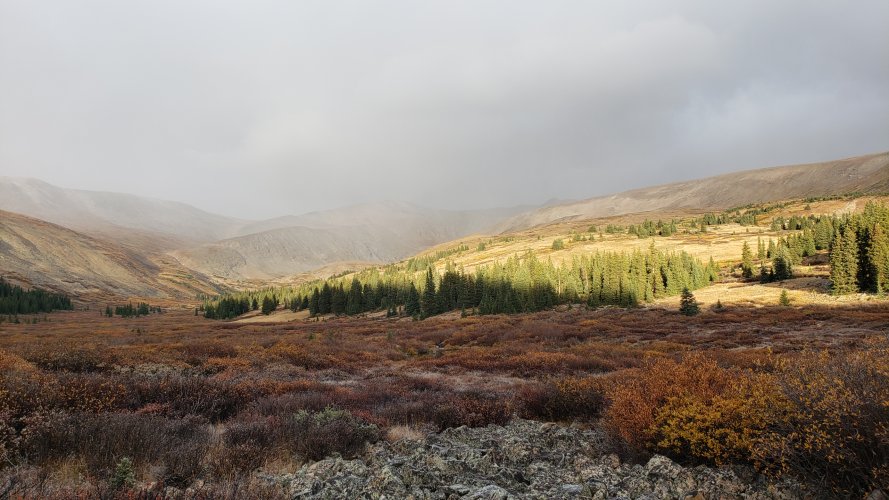 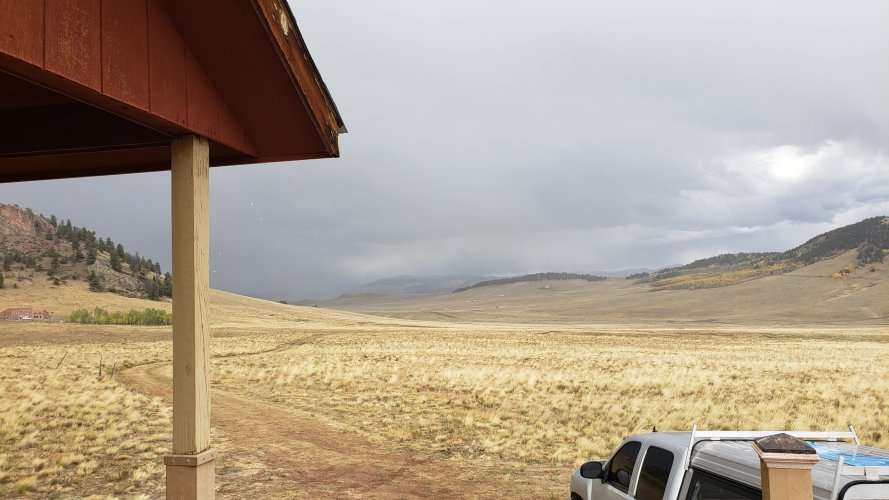 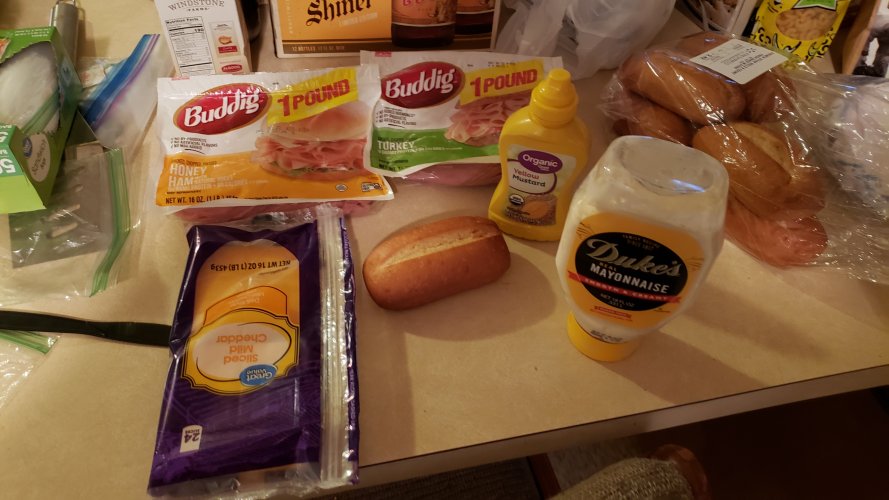 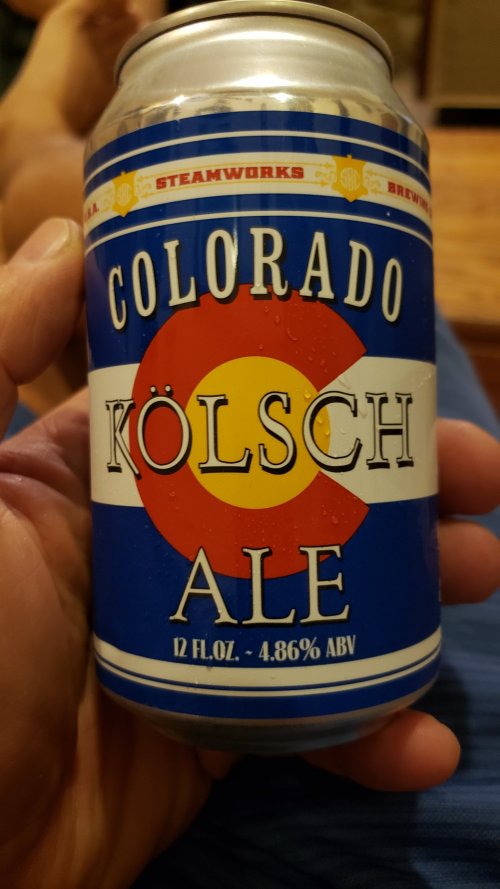 Opening day: We got an early start and headed to the trailhead. The day's worth of rain had the road from the cabin to the blacktop pretty slick. It got kinda hairy a few times but with some heavily applied throttle and creative vocabulary we pulled through. After we hit the blacktop, it was on to the trailhead. We passed through town, hit the road headed to the trailhead, and followed a fresh set of tire tracks. With each turn I noticed we were still following them. It was the same right up until we turned to go to the trailhead. The tire tracks continued straight, and that knot in my stomach eased up. We parked, shouldered our packs, and headed up the creek bottom. There was a good amount of snow on the ground (Maybe no to some of yall, but to 2 guys from Mississippi it amounted to more than we get in a 5 year span). 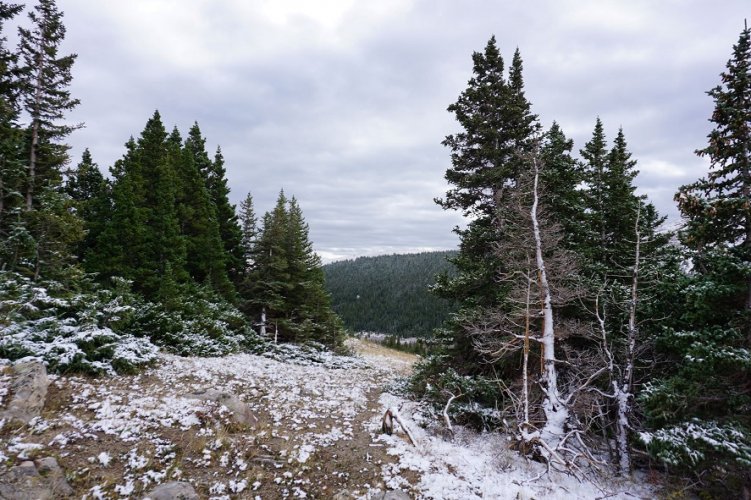 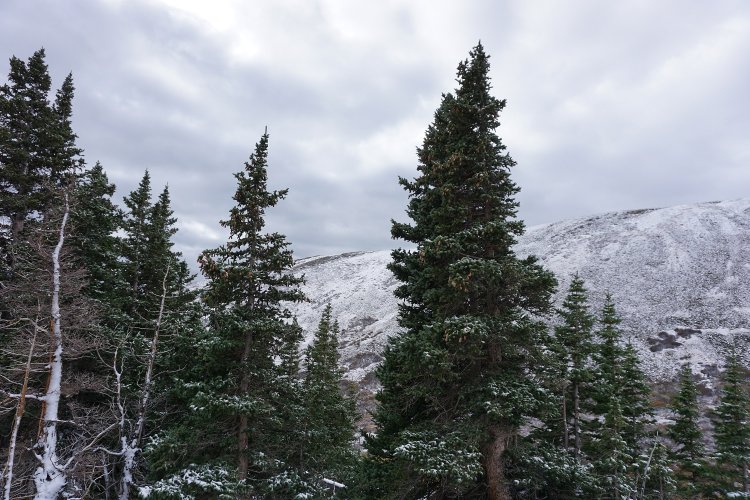 We made it to the glassing spot from the day before. I could already taste the moose steaks on the grill. Then we wait. And wait. And wait. No moose. I guess we're not going to be eating a burger in town for lunch. We regroup and decide the moose must be in the higher willows.

We drop back, find a good creek crossing, and gain elevation. There were a lot of willows and hidden meadows up high. We intended to get a look at all of those. We made the first ridge, glassing along the way. I had Norton sit on the point of the ridge and keep an eye on the creek bottom. It would be easy to drop down if needed. I was going to hit the next ridge loop high, and glass all of the hidden meadows between us, then come back and meet up with him.

No moose from any of those vantage points. I went back to the point of the ridge only to find no moose had been spotted in the bottom. On to the next ridge. We moved ridges and repeated. Just as I was leaving, a bull elk started bugling and chuckling. It was a nice distraction. This loop ended with the same results. No moose spotted. Let's hit the next ridge and try again.

Once we reached the next ridge I decided that I would make a bigger loop, and make my way to the head of the drainage. I started off, glassing all the way. About the time I started to loop high I got a text. Jonathan was at the trailhead. I dropped him a pin and started off again. The willows here ran almost to the highest accessible point. Rather than gain that much elevation I decided to hit a game trail until I could get into some more open territory. I hadn't made it far at all when the wind swirled. As if it were a ghost, a cow moose appeared 50 yards in front of me in the willows. I guess she got my wind and wanted to investigate.

Well I found a moose, now what? She's in willows tall enough to cover her vitals. No shot. She's kinda spooked but not too bad. I am pretty sure she doesn't see me, only smells me. She trots off a little ways and gets calm again. I decided to continue down this game trail until I can get on the same trail as her and maybe get a shot. This continues on for a while. She calms down, I get close, the wind swirls, she spooks. I keep an eye on her tracks in the snow and watch for her head above the willows.

I just know I'm almost back to our glassing point. I pull out my phone, pull up my map, and find the glassing spot. I spin around towards it and there she is. Wide open, 100yd out. The only problem is Norton is on the knob just beyond the trees from here by about 50 yards. I'm not going to risk that one. She slowly eases off. At least she's going downhill. I loop way around as to not spook here and meet up with Norton.

I asked him where the moose was ad he looked at me like I asked him to perform calculus there on the mountain. Obviously she hadn't made it that far. We huddle behind a small clump of trees and formulate a pln. He'll keep an eye to the west, where I saw her walking downhill. I'll loop to the east and try to get eyes on her. About 2 steps from our tree I spot her. She's just donwhill and looking back up her trail trying to catch a glimpse of the orange thing that has been following her. We gather our gear and slip down to the next bunch of trees.

"She's right there quartering to us. Give me a range and I'll ease out and shoot". I get the gun loaded and Norton peaks over my left shoulder. "75 yards". Really? 75? "Yes, 75 yards" Ok, let's make this happen. She's quartering to us and I don't feel good about the shot. I move around the trees and find an even worse angle there. By the time I get back around, she's starting to calm down and turns broadside.

The ole 300SAUM barks and a 180gr partition hits it's mark. She gets weak in the knees and I know it's over. Or is it? "Shoot her again". Really? I guess so. She's headed for the creek. At the second shot she lunges and I nick her high in the back. "Shoot her again". She's stunned and quartering hard away still making small steps toward the water. Shot 3 entered the tenderloin, and exited the opposite armpit. She pauses and I am left with no more shots. I move to the other side of the trees in hopes of seeing her fall. No dice. She's still standing, and 2 more shots find their mark. She's finally down. 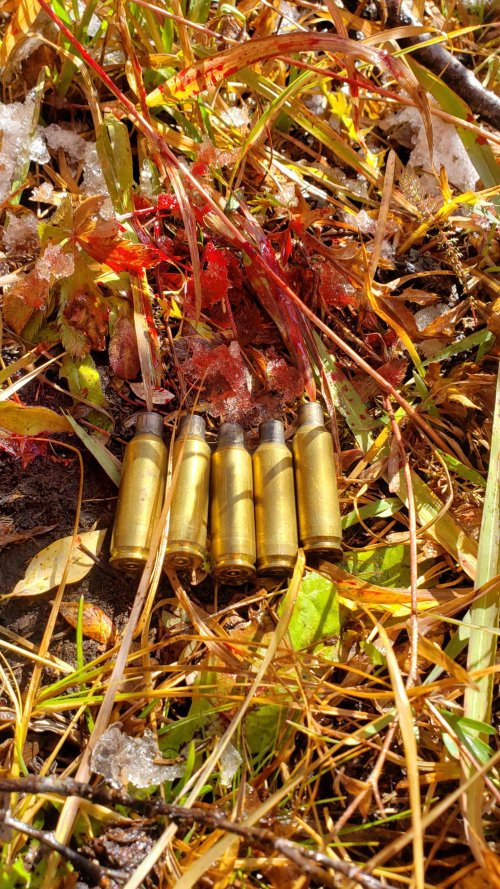 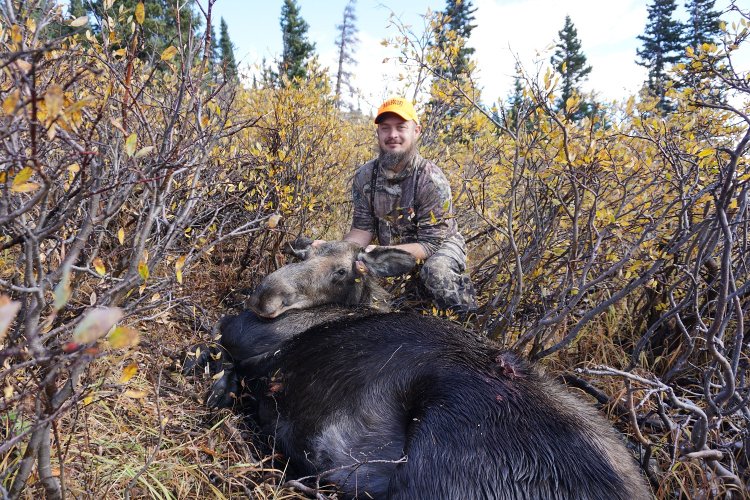 I made my way downhill to her. Norton grabbed the packs and headed downhill as well. About the time we reached her, Jonathan walked down the ridge. Now it was time for the fun to start. We spread out a tarp, game bags, and enough knives and sharpeners to butcher a herd of cattle. We got her broken down, bagged up, and in our packs. 3 loads of meat would go out on this trip. We lightened our packs a little in anticipation of getting our gear on the next trip. The camp robbers were there pretty soon enjoying the scraps as we walked away. 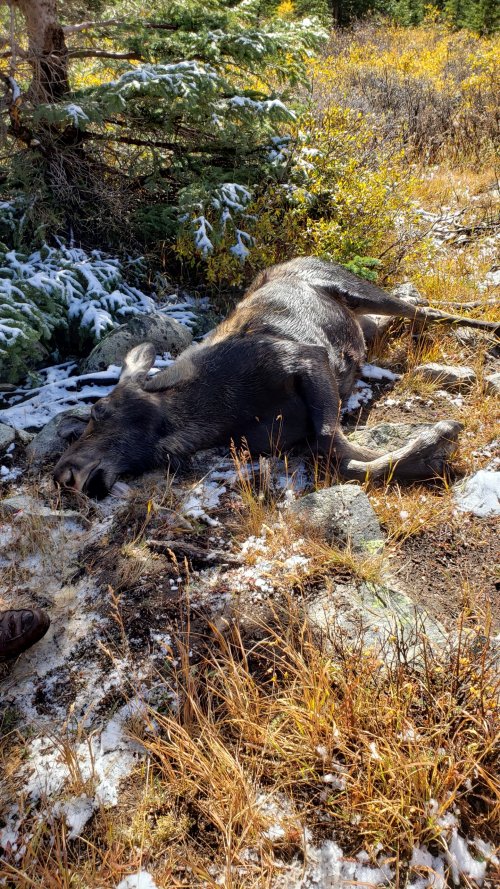 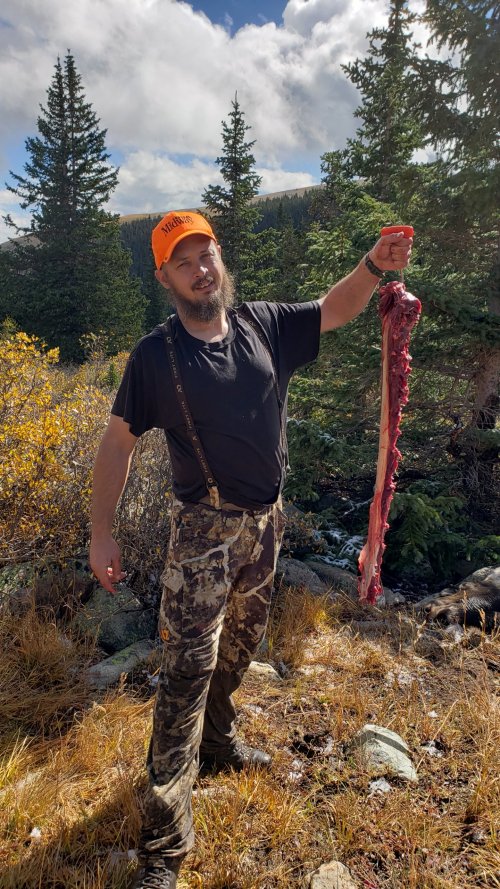 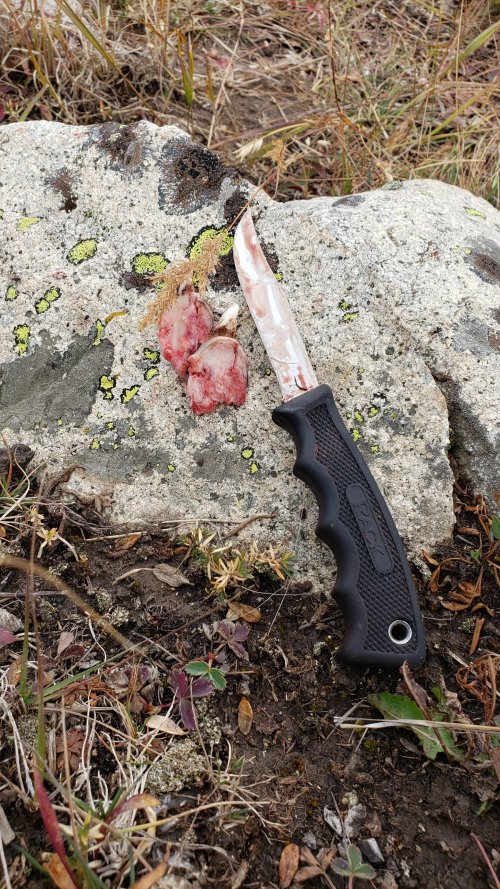 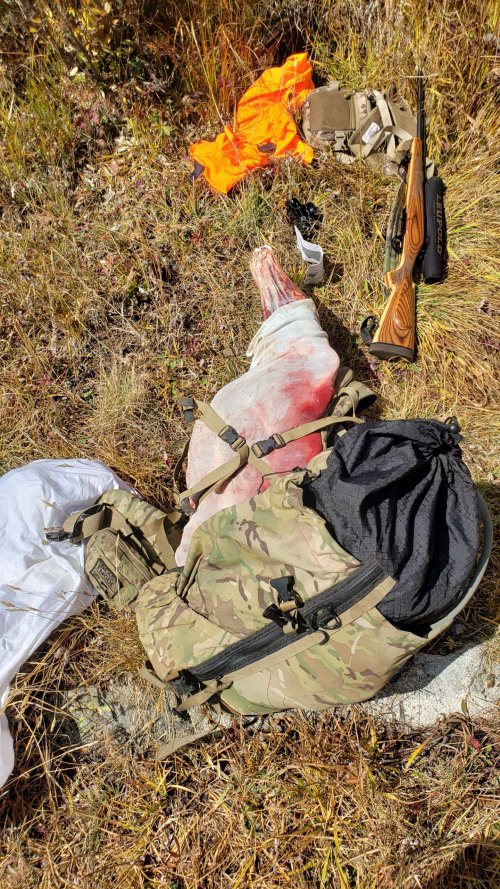 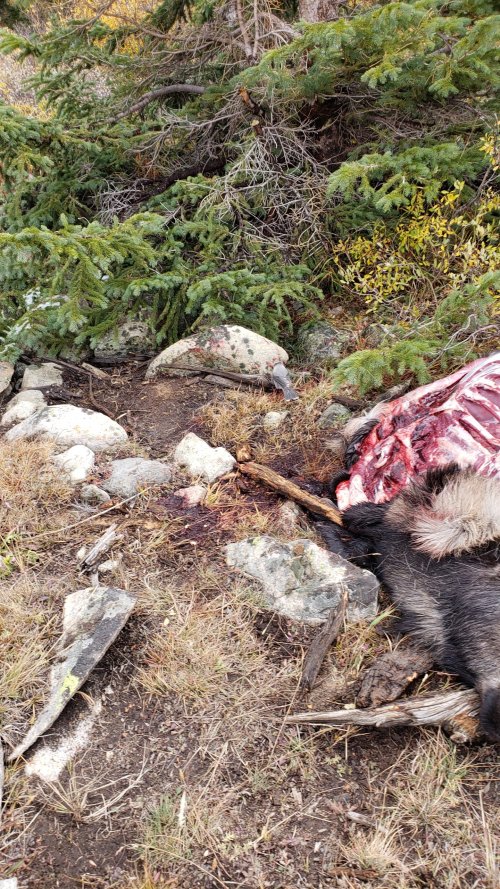 We made it to the truck pretty easily. It was fairly flat, downhill walk a little over a mile. We made it to the truck and started filling coolers. We only had 2 loads of meat left. Norton stayed at the truck and got the coolers organized and started getting the truck loaded. Jonathan mentioned the rain clouds rolling over the mountain. I was already soaked from the march through the willows earlier that morning. I opted to leave my rain gear and head out, anticipating a quick round trip. Jonathan donned his rain gear and we set out.

About 10 minutes into that return trip I regretted my decision. Instead of rain, the snow started falling. The closer to the meat we got, the harder the snow came down. We quickly loaded up and got pointed toward the truck. We made record time, heads down and legs moving. By the time we reached the truck my hands had dang near quit working. I dropped my pack and got in the truck to soak u some heat. Norton got us all packed up and we headed to town. A quick stop by the store for some beer and charcoal and we were headed to the cabin.

We made it to the cabin and got some dry clothes on. We cooked burgers and couldn't help but throw a tenderloin on to cook as well. My first taste of moose was everything I had imagined. The remainder of the trip was nice. The other 2 guys headed out after antelope. I got a late start Sunday and made my way to a nearby river to pass shot some teal. I grabbed a burrito and a brew at the local brewery and soaked up the last few moments at the cabin. The next morning found me headed to a processor to drop of the meat, then on t join the others in pursuit of antelope. 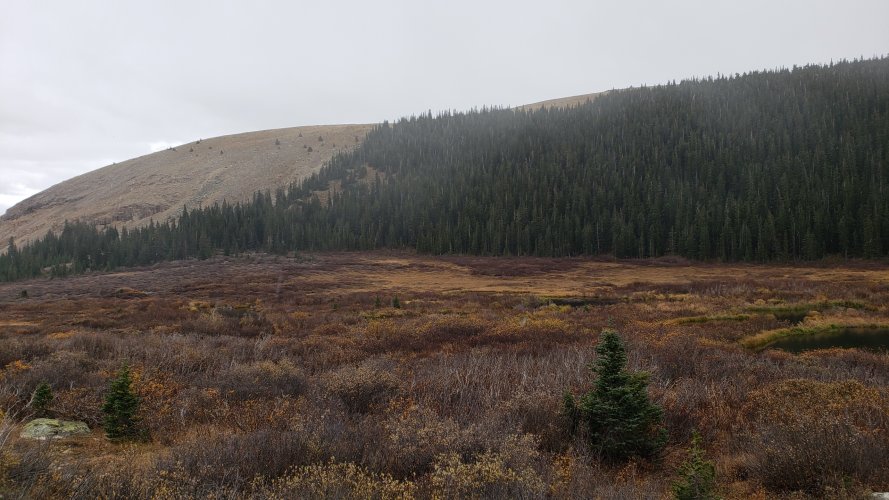 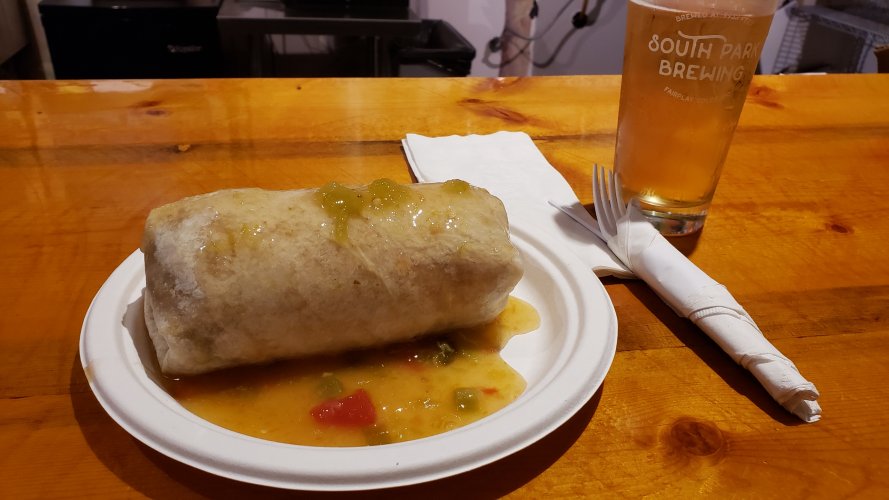 Any ever try decoying Shiras Moose?