Hi guys, headed to AK this September and I am stuck trying to figure out how I can bring a moose head back to Michigan if I’m lucky enough to get one. I’m looking for some ways to clean it up just enough to ship it home with my meat in October because it’s no extra charge with the meat. So it will be frozen, but I need to clean it or have it cleaned by the first of October. I’m flying so I won’t have what I need to boil it. I figured someone here has a clever way to do this.

Unfortunately by the time it’s legal for transport, freezing it won’t matter because anything that could spoil will have to be removed. Brain, eyeballs and all soft tissue has to go. You could find someone to boil it (or hit up @wllm1313 for his sous vide technique), pressure wash it at the car wash (careful with the turbinates and small bones), or leave it at a taxidermist if all else fails.

Good luck on your hunt!

I have not yet done a this traveling to AK, but it would work provided you have access to an electrical outlet for 24 or so hours.

I have seen a bunch of threads about CWD, and how to legally transport the head of your animal home. In particular, how do you get your head home if you want to do a euro mount and keep the skull. The obvious answer is boil it in the field, but that could require bringing a bunch of extra...
www.hunttalk.com

I found that post, seems interesting. I think that may be the ticket when I get back to Fairbanks. I’ll need a big cooler for a moose I’m guessing!

MITCHMO said:
I found that post, seems interesting. I think that may be the ticket when I get back to Fairbanks. I’ll need a big cooler for a moose I’m guessing!
Click to expand...

Your biggest issue is going to be dealing with the antler angle, a moose skull isn't all that much bigger than an elk (not enough to matter in this case) but their antler angle is flatter so getting the occipital bone submerged is going to be the issue.

I would buy a plastic tub at walmart, slice the sides so you can get put the skull at the right angle to get it covered in water.

Hot tips for this process:

1. Trim of as much flesh as you can before it really helps... especially on the occipital bone
2. Fill your water vessel in a shower with the water as hot as possible, it will take a sous vide machine forever to raise the temp of a large bucket of water from 72 to 135-45 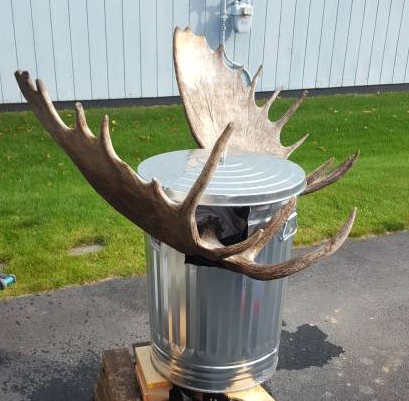 Something like this, if you cut out the white area would probably get it done.

I knew you guys would have a brilliant idea. BTW that trash can wearing moose antlers made me spit my drink out. I don’t know why but it looks hilarious to me.

Having done this once, I can offer my suggestions, but it does matter where you are flying to and from and the size of the airplanes that they have there. Bethel was just able to handle what we gave them on the way out. It had to go through Seattle and end up in Kansas City rather than Omaha or Des Moines where it would have been more convenient for us, because the planes at these destinations were not big enough to handle packages that wide (largest rack was 54").

In any event, we trimmed off everything, All muscle, eyes, tongue, skin, ears, etc. We wished we had brought some 20 Mule Team Borax because we could not buy it in Bethel. Then we wrapped the cleaned skulls in some old t-shirts and bound them with cordage. Next, we nested the two racks and protected the tips with lots of foam pipe insulation from the hardware store, using lots of tape. Then we rapped wrapped them all with two tarps and lots of duct tape and lots more cordage. The entire bundle weighed only about 140# and was flown as FREIGHT, not as baggage. They arrived in Kansas City about a week or 10 days after we arrived at home. One of us had to drive to KC and fetch them. The key was shipping as freight, AND having a known freight agent/shipper, which we had. Apparently, not just anyone can ship freight by air.