The following is copied and pasted from another turkey forum I spend time on in the spring, so some of the references my sound off since I penned it back in the spring.

We started the season in MT with Boyd's and Heather's special permits. Heather hasn't hunted turkeys in 8ish years and Boyd had never killed a turkey, so I couldn't persuade either to pass up a jake. We tried to get Boyd up first but these turkeys were on a mission to be shot by Heather instead of Boyd.

Boyd and I tried to get it done a couple more times that first week, but could not convince one hard headed bird (he'd been shot at on day one by another hunter) to close to closer than 50 yards and another refused to stay on public ground on two different occasions.

Boyd hiking up the mountain

Isaac and I hunted public land in a General area on the following weekend.

Isaac killed this melanistic tom about a half hour before dark after one of his four hens decided to com investigate. He strutted right in to 25 yards. We didn't notice the black wings while he was strutting.

We worked another bird a couple times that same day and the next morning but couldn't get him to close the deal. He was a beutiful Merriams and strutted at 75 yards on a big rock for a while at noon, before Isaac killed his bird. I was hoping to catch him again when we returned from our trip back home.

We made it back home the next weekend to chase Easterns and hopefully get Boyd his first bird.
Boyd walloped this tom on our second morning. The tom had been strutting in the field with several hens and gave us the slip on day one, but day two found him gobbling and strutting around the field edge to meet a load of #6 Hevi from Boyd's youth model 20 ga.

Boyd's first turkey was a great tom. (me showing off his spurs)

We followed that up with a two bird day for Isaac and I on public land. 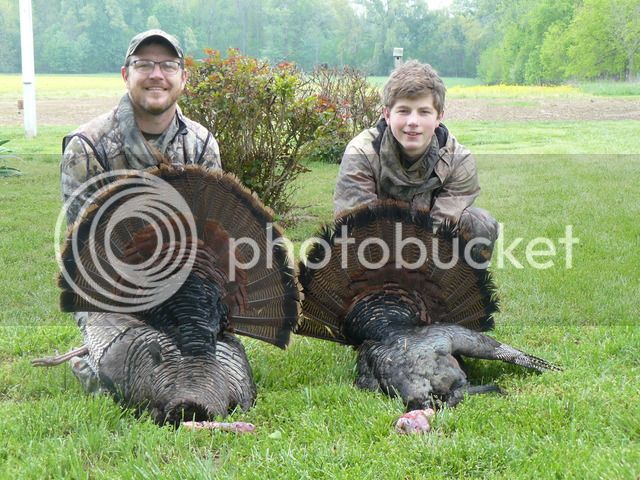 Then I filled my second tag with another field bird that I moved on several times.

We finally decided to stop in KS for our first hunt in that state. The weather was looking questionable, so I didn't decide to keep with the KS plans until we were almost to Kansas City. Our first morning found us on a WIHA (that I picked out from satelite images) about 30 minutes after flydown. It took a couple hours to finally get on the right side of the creek, but we finally called this tom across an alfalfa field and away from a couple hens. I had to hang back along the creek to call while Isaac crawled up near the edge of the weedline so he'd be in position if the tom came in.

I usually have to say something stupid to get a real smile.

Isaac was sitting in the small trees to his left and I was 40 yards behind him against the creek.

We found some birds late in the day that afternoon/evening but couldn't break them away from hens, so we made plans for a morning hunt. It rained cats and dogs that evening and all throught the night so I didn't have much faith in having any luck or even getting to the birds. We started late during a gap in the clouds to avoid the rain and were lucky enough to call two toms in within 20 minutes after a 30 minute hike because of the road conditions. I had bought Isaac a second tag and hoped for a double, but when my bird went down, the second tom took to the air a fraction of a second away from Isaac squeezing the trigger. I was glad he didn't shoot at the bird flying away from us. (This was my first Rio)

I had a few more days off work once we arrived in MT, so Boyd and I made plans to get him on his second bird and fill his MT special permit. I was really discouraged after a heart breaking miss on the tom that we had tried so hard to kill (same bird that had been shot at by another hunter), but I avoided discouraging Boyd. We continued looking for another tom and found one strutting with a single hen. He quit gobbling after a few minutes but I was certain I could hear him strutting. Twenty minutes of silence followed by 5 or 10 minutes of close up drumming and the tom finally strutted into the opening at 20 yards behind his hen. Boyd's aim was on the money this time and he had a fantastic mountain bird.

This tom looks really unique because of his reddish buff color. He's definitely a Merriam's since there has been no other birds introduced here in the mountains. I think he's the best looking bird we killed this year and he had fantastic hooks for a mountain bird. Boyd's first two birds were great toms.

Boyd's success freed me up to hunt the final weekend in MT to try and find myself a tom. I was hoping to find the same bird from earlier in the season. There had been another hunter in there one of the days we hunted, so it was anybody's guess if he was still around. I wasn't planning to be picky as long as it was a tom. The weather didn't look too good but this would be my last chance for a MT bird for myself, so I was going no matter what.

I was beginning to believe I wouldn't hear a bird at all because of the wind and passing rain, but one finally sounded off from the roost. After an hour or so of chasing my tail between two birds that I thought was one, I finally found myself in position to kill this tom. I'm almost certain that it is the same bird that slipped thorugh our fingers twice before. It makes me feel better to believe that anyway.

We hunted the Pine Ridge in Nebraska over Memorial Day weekend, but did not kill a single bird. It rained every day we were there. We had a few sunny spots between clouds and I had a tom at 30 yards that I should have killed. I could see his head but thought he'd take one more step to give me a clearer shot, but his one step was back down the hill and out of site. I still had a great time hunting with a buddy from CO that I hadn't seen in three years. I feel like I owe them now, so I'll definitely be back.

If I'd have had the money, I'd have drove back to NE for the last weekend, but our travels had pretty much bled me dry and I believe Heather may have changed the locks if I'd have tried it.

That finished up our season. Next year won't be as eventful because Isaac's school schedule will change to somewhat of a college schedule instead of a homeschool schedule, so it may be a while before we have another season as good as this one. I'm not complaining though, it was a great season with some beautiful birds, some very unique birds, Boyd's first two birds, and Heather's return to turkey hunting.

Congrats. Looks like you had one hell of a spring.
You must log in or register to reply here.