My Girlfriends first elk hunt ever.

It seemed as if time stood still, hiding behind a moo cow decoy at the edge of area 51, staring into the eyes of a giant elk chewing its cud. The sun was just starting to give color to the valley. I could feel a brisk wind on my face while I was patiently waiting for my gal to pull the trigger. CRACK goes the 300 WinMag. Dang,,,,, In the panic and patience of getting ready I didn’t realize my left hand was full of moo cow decoy but I did drop my binos in time for my finger to find its way to my right ear to muzzle the noise a bit. I knew with the big ol critter laying down and mostly facing us it was a very small window to make a good shot to the vitals. I see the big guy stand up and start to shake his head back and forth as if he had just been punched. As I’m telling her to reload and now walking out into the open for a closer shot I fear the bullet may have just hit an antler or glanced off a thick skull for the animal to be acting like that. We shortened the distance and now are in full view of all the cow elk which are still wondering why their fearless leader keeps shaking his head like a dog trying to remove the rain from its coat. They see us and start to make the decision its time to leave him and get into the woods. As the last one clears the shooting lane I tell her to shoot again. CRACK, goes the second shot from behind our moo cow decoy although it is mostly at our feet now. As I tell her to reload, I see him start to sway and finally tip over. I call off the third shot and we are now fully exposed in the field walking toward him. We come to a muddy bog of a creek to cross and she goes down while I go up looking for a good place to cross.

She gets to him first and verifies he is down for good. As I am walking up on him, he just gets larger and larger. I knew right away this was a special critter. Later I measure it at a smidge over 348 SCI. I’m not one to count inches but on something like this I am always curious. My gals only motivation was to just put meat on the table. Or at least prove to herself that she was capable of doing it should the need truly arise. She was going to shoot the first bull/spike we saw and I really had to talk her into a 4 point minimum for the first week. From doing the research I knew this was going to be a tough hunt as it’s a 5 month depredation hunt but only has about 20-30 animals on the entire mountain range. Since I spent 5 days scouting and only found a less than steamy pile of elk poo I was calculating we would have to put in 30 days to get it done. I would have called it a win to just see one the first trip. We packed the trailer preparing for a two week hunt and saw this big critter the first night in the open field. She passed on the first 400-yard shot. Later, got her looking down at him over the treetops in the dark at 80 yards. Passed on that shot. The next morning got her looking under the trees at his neck at 70 yards. She passed on that shot. That evening he went missing. My heart sank as I knew our luck could not continue. We busted out the moo cow decoy and went further up the valley. The moo cows in this area must be wild as they take off in a stampede at first sight of humans, even at 400 yards they would run taking every wild critter with them. Never seen that before but it happened over and over while I was scouting. That evening we were able to get within 20 yards of some moo cows holding the decoy. I think they questioned why this red cow had three heads as their tails were getting swishy and they were no longer eating but looking around as if wanting to run. Since it was getting dark we started to back out of there. We only made it 30 yards or so when we heard them stampede into the trees further into the darkening wilderness area. They must have caught our wind.

I figured If we didn’t see the elk the following morning in the same field we were going to have to hustle over to the other valley before it got to bright. We lucked out and saw them in the field before sunup. It was time to make it happen or break it trying. We deployed the moo cow decoy and just went straight at them skirting the outer most tree line to breakup our outline. Several times the cow elk saw us, and we just stayed still while tilting our mow cow back and forth as if it’s a happy cow doing what happy cows do. It worked as the cow elk put their heads down and went back to eating. We pushed forward as far as we could until we were stuck in the open with the bull looking straight at us while laying down in the field. Found out later the 1st shot was perfect heart shot and the 2nd just skinned the underbelly. It started to get hot in a hurry as this was early August
so I cut that thing up as fast as i could while she hauled the entire thing to the jeep one load at a time. The bees were swarming the meat. Never seen that before but I just had to keep cutting even though they were all over me. I’m sure I tossed a half pound of bees in the meat sacks as they were just swarming.

We really got lucky. There was only a 2% chance of getting this tag. There were 16 elk tags given out last year for this area and only 1 tag was filled. I may have ruined her for elk hunts to come as we won’t be able to top this hunt, but I will really enjoy trying each year. 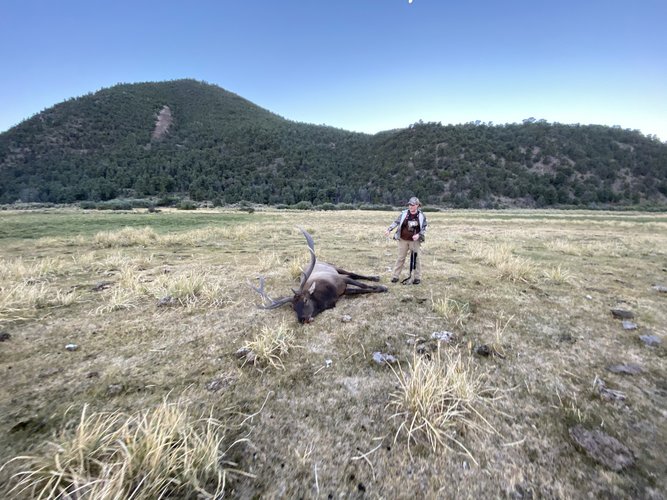 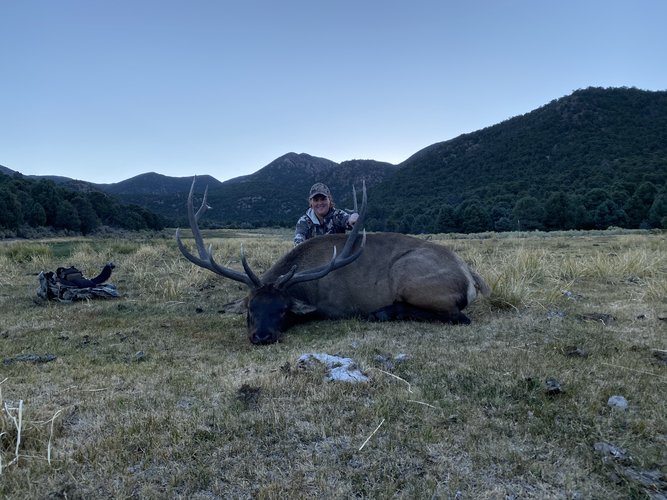 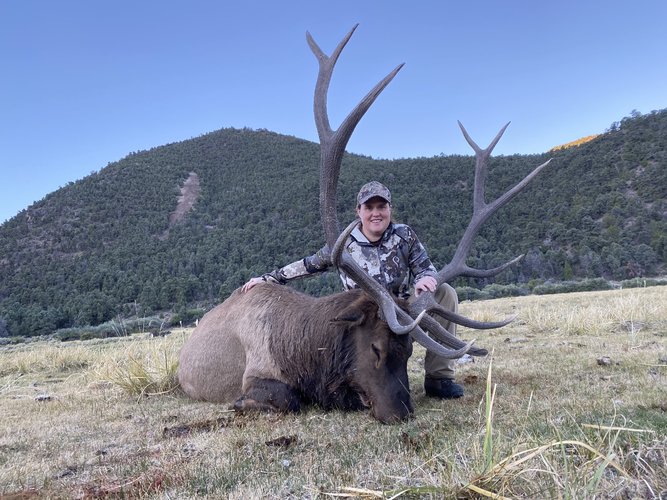 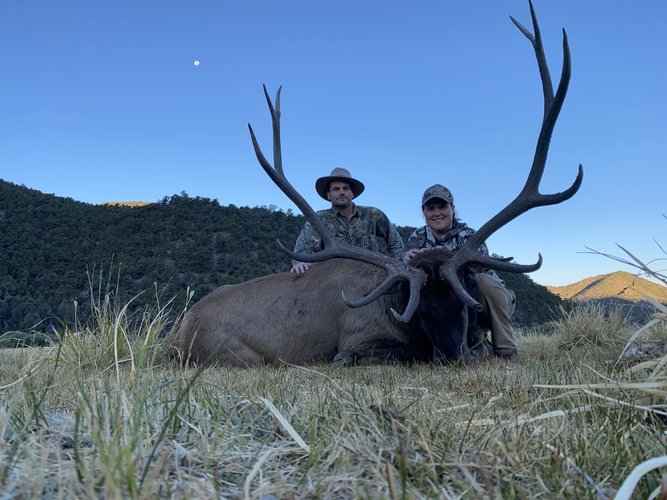 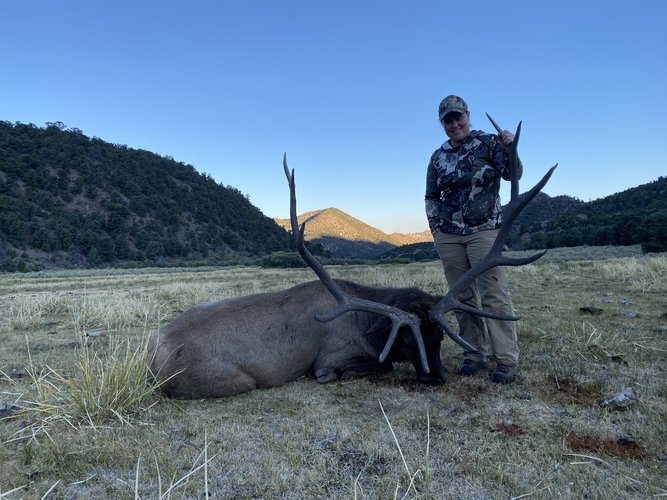 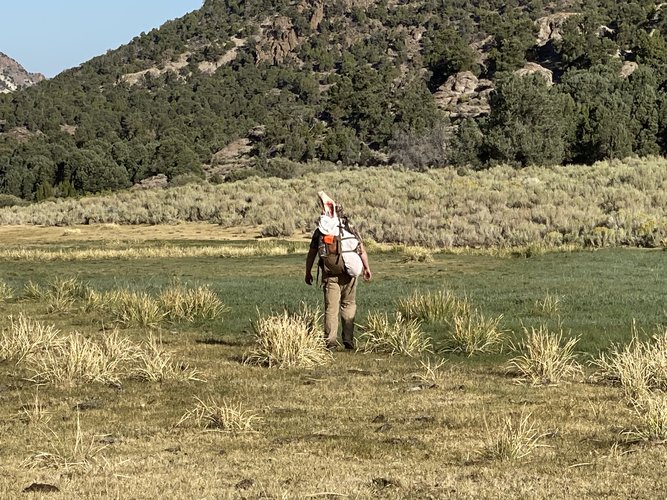 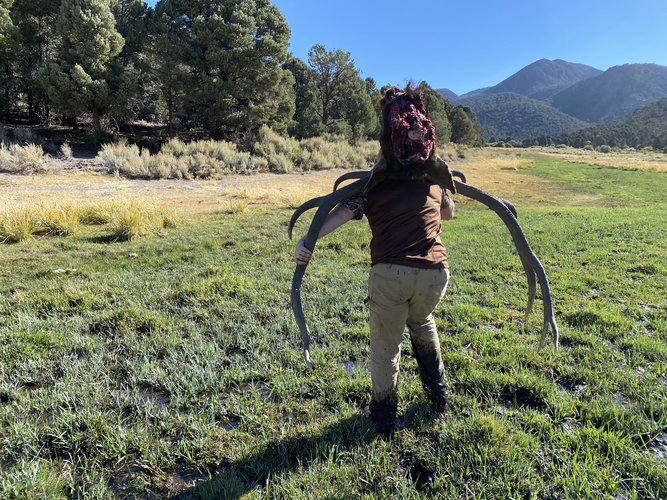 Man what a bull! Congrats!!!
P

awesome! what a bull

Now that is a good one!

Wow! That bull is a stud! Congrats

Way to go! She is spoiled forever now, you know that!
F

What a bull!! Congrats.
P

That is a great bull! Congrats!
P

Congratulations that is a beautiful first !

"just put meat on the table"
Nice bull!
You must log in or register to reply here.