With Bretts previous article in March about the declining elk herd in Paradise Valley, with quotes from FWP biologist Karen Loveless that the elk calf recruitment would have to increase to 30% for the herd to grow, and the statistics I got from her the other day that show that HD 317 is under objective by 16%, why are they having elk hunts out of season in HD 317?

When 300 elk began feeding alongside cattle in Jim Durgan’s alfalfa fields early this spring in the Paradise Valley and then started raiding his haystack, he called Fish, Wildlife and Parks.

In the first year of an aggressive management plan meant to reduce or prevent the transmission of the disease brucellosis from elk to cattle in areas surrounding Yellowstone National Park, FWP offered to provide a hazer to move the elk and to pay up to $2,000 for fencing to enclose Durgan’s haystack.

Working sometimes at night and early in the morning to move the elk out, the hazing worked. Durgan was pleased.

“A local guy did a very good job, and I really appreciated it,” he said.

Although the tactic worked, Durgan said the measures do not solve the bigger problems. These include wolves that he claims are bunching up elk into larger herds and pushing them onto private lands seeking safety, lack of access to some private lands for hunters to disperse and reduce the size of elk herds and what he sees as overall poor wildlife management by the state and federal government.

“Personally, I think this is just a Band-Aid,” he said.

Durgan’s concerns point out the complexities of trying to manage a difficult situation that blends a variety of groups with different agendas while trying to deal with wildlife that aren’t always easy to manage.

The outline of the plan was developed by a working group of people from various backgrounds and modified and adopted by the FWP Commission in January. The idea in this first year was to go slow, said Quentin Kujala, FWP’s wildlife management section chief. In addition to providing a hazer and money for fencing, the department also allowed two dispersal hunts meant to move animals away from cattle operations. One such hunt was held in Hunting District 317, the east side of Paradise Valley, and the other in HD 560, south of Big Timber.

“Before, the department would have issued permits to landowners,” said Dan Vermillion, FWP Commission chairman who lives in Livingston. “This year it was much more surgical.”

In all, hunters took 13 cow elk from the two areas. None of the elk in HD 560 tested positive for exposure to brucellosis while three of the cow elk in Paradise Valley tested positive.

Transmission of the disease is greatest when the elk give birth in spring — hence the attempts to keep the elk separated from cattle in spring. An infected cow elk’s afterbirth can transmit brucellosis if cattle come into contact with it, although sunlight has been shown to kill the disease eventually.

Cattle testing positive for the disease used to mean slaughter of the entire herd and the lessening of status for all Montana cattle, affecting their value. But newer regulations only require that cattle that are being moved out of the Designated Surveillance Area near Yellowstone Park be tested for brucellosis to stem any spread of the disease.

Out-of-pocket expenses for the program this year included more than $1,550 in payment to the hazer and more than $7,750 for fencing at four cattle ranches. That amount included fencing at one ranch where hunting by the public is not allowed, a fact that irritates sporting groups.

Hunting is seen as the best management tool for the state to control the size and distribution of wild game. But on large private holdings, if hunting is limited or public hunting is not allowed, game animals will view the property as a refuge, even hiding out on the land during hunting season. The problem is when those animals then wander onto adjacent lands and raid haystacks or agricultural fields.

Kujala said FWP will help landowners who do not allow hunting, but only if they are willing to work toward and discuss a resolution to what’s become known as wildlife harboring.

On the other side of the elk brucellosis management issue are people like Bozeman wildlife advocate Kathryn QannaYahu. She has criticized the new management actions and charges that FWP’s interactions with landowners should be open to greater public scrutiny.

“There is no accountability and transparency in what is taking place,” she said.

QannaYahu sees the entire operation as an attempt by FWP to manage for livestock rather than wildlife.

“This is all about grass, this is not about brucellosis,” she said.

FWP’s Kujala noted that the disparity between the concerns of constituents like QannaYahu and Durgan demonstrate the huge gap that exists in how to deal with the issue of brucellosis-infected elk and the possible transmission of the disease to cattle.

“Part of the challenge is still getting everyone on the same page,” Kujala said.

To that end, the elk brucellosis working group will meet at the Bozeman FWP office at 10 a.m. July 11 to review this season’s first year of field work with an eye to possibly modifying the plan for next season.

In August, the FWP Commission will take up any recommendations from the working group and then seek public comment on next year’s plan.

The agency and its partners are still learning about where and when to haze most effectively, Kujala said, and where and when to place hunters to maximize their effectiveness. The end game is to educate the elk into staying away from cattle and agricultural fields, especially during the spring elk calving season.

“Given that we have seen some success, we would look at having the same tools available again next year,” Kujala said.
Click to expand...

Location
In the mountains, Western MT

It's a shame, but the article says why. "...aggressive management plan meant to reduce or prevent the transmission of the disease brucellosis from elk to cattle in areas surrounding Yellowstone National Park".

I think the solution is the removal of all cattle within 20-30 miles of the park. That should help.
K

Carrion Carrier said:
It's a shame, but the article says why. "...aggressive management plan meant to reduce or prevent the transmission of the disease brucellosis from elk to cattle in areas surrounding Yellowstone National Park".

I think the solution is the removal of all cattle within 20-30 miles of the park. That should help.
Click to expand...

More like management for APHIS and livestock interests, rather than managing for wildlife and sportsmen. 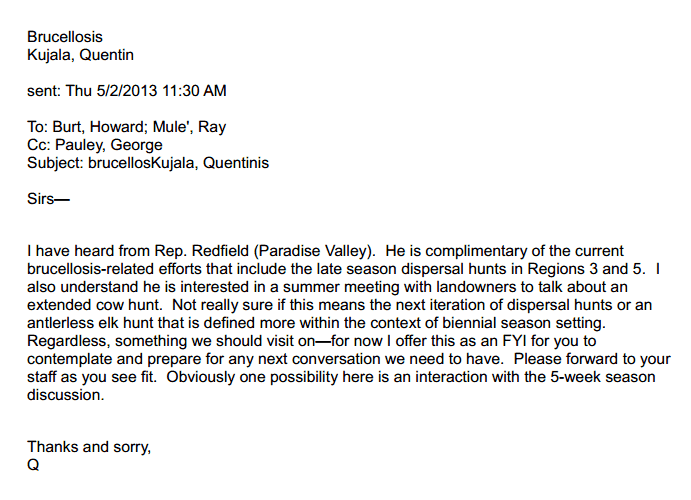 Carrion Carrier said:
It's a shame, but the article says why. "...aggressive management plan meant to reduce or prevent the transmission of the disease brucellosis from elk to cattle in areas surrounding Yellowstone National Park".

I think the solution is the removal of all cattle within 20-30 miles of the park. That should help.
Click to expand...

Actually the elk are wandering much farther than that! A collared elk from around Ennis wound up way down at the Wyoming feedgrounds. The solution being pushed by the people who want to solve the problem (as opposed by those with another agenda) is to keep the cattle out of the elk birthing areas in the spring time. It seems practical on public land, but the cattlemen will lose a few weeks of public lands grazing. Closing the elk feedgrounds might give the elk less incentive to make such long journeys, but that is politically unfeasible at this time.
C

Location
In the mountains, Western MT

That is the crux of the Wyoming - Jackson Hole dilemma ... but decades-old tradition.
K

For those that have not seen it, Danny Schmidt did a great 26 minute documentary called Feeding the Problem. Free for viewing at PBS. Well worth the watch. We had a presentation of the documentary a few months back and had Dr. Tom Roffe, and Lloyd Dorsey (from the documentary) as quest speakers to answer questions for the public, along with local vet and Elk Brucellosis Working Group member Dr. Mark Albrecht. I filmed the Q&A and still need to get it edited and uploaded. One of the academic papers I have is on the re-emergence of brucellosis, heavily attributed to these elk feed grounds.
R

Trying to "educate" elk into avoiding the resources offered to cattle during calving season. They know where the best resources are and they need them, you cannot stop this basic survival instinct. Cattle have encroached on the elks resources which is a point clearly lost to one side of this discussion. And why are dollars going to aid ranches that do not allow hunting. If you don't allow public hunting, you shouldn't be eligible for depredation funds and the like. No double dipping.
You must log in or register to reply here.