Fun times on the Texas coast

It's been a family tradition since I was a kid to rent a beach house on Galveston Island in the summer. About 20 years ago I learned that when the conditions are right you can catch speckled trout by just wade fishing in the surf, and they will often hit topwater, which is my favorite kind of fishing. There's also the possibility of catching sharks, mackerel, Jack crevalle, and really just about anything in the Ocean, which just adds to the experience. Unfortunately you plan the vacation 6 months in advance so there's no way to predict what the conditions will be, it seems like I have about a 1 in 3 chance of the surf being right. More than once our vacation got cut short by a tropical storm or hurricane, which ruins more than the fishing. This year we hit it pretty good with a 3-4 day stretch of good to great conditions, here are a few results.

The first morning the gulf was flat but a bit sandy, visibility only 6-12". My brother and his son caught a cooler full of sand trout as we needed a "meat-haul" to feed a large group. I was focusing on topwater speckled trout, and by 8:30 I had 4 keepers (limit is 5, 15" minimum size), nothing big, and thrown back about 10 undersized. The bite had died down but I was still seeing some bait activity 50-60 yards out in deeper water, I was already standing in water up to my armpits. So I tied on a Heddon super spook (very large walking bait) since I can cast that thing a mile, it's like throwing a javelin.

So 2nd or 3rd cast, HUGE blowup, then a large fish went airborn, but I didn't get a good look at it. Good hookset, I immediately knew I had big fish on, but it didn't feel like a trout. I also quickly remembered that that reel had an 8 lb test leader, which was sort of a screwup, normally have 15-20 lbs in the surf. So I really had to be patient with this fish, it was a long lumbering fight with numerous drag peeling runs. I got back in knee deep water thinking it was probably a shark, but my nephew finally got a good look and said it was a redfish!

After a few tries he did a good job netting the fish; 33", 11.2 pounds, my biggest redfish by far. It's not unusual to catch redfish on topwater in the marshes and bays, but those are typically smaller fish (1-5 lbs) in shallow water. Catching a big one on topwater in the surf in 7-10 feet of water doesn't happen very often, as far as I know. Normal method in the surf is live or cut bait on the bottom. 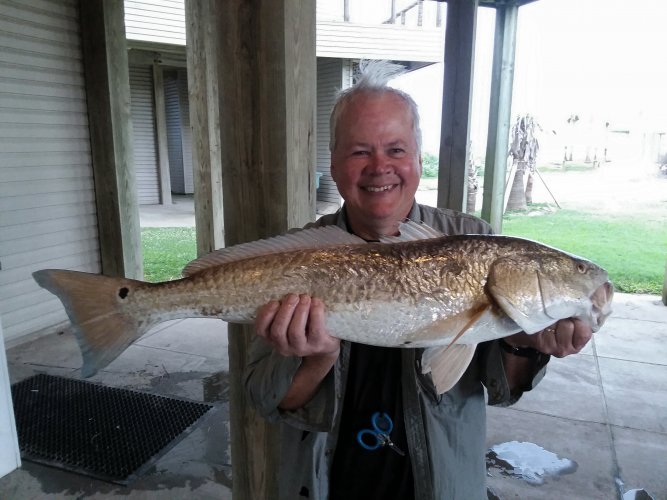 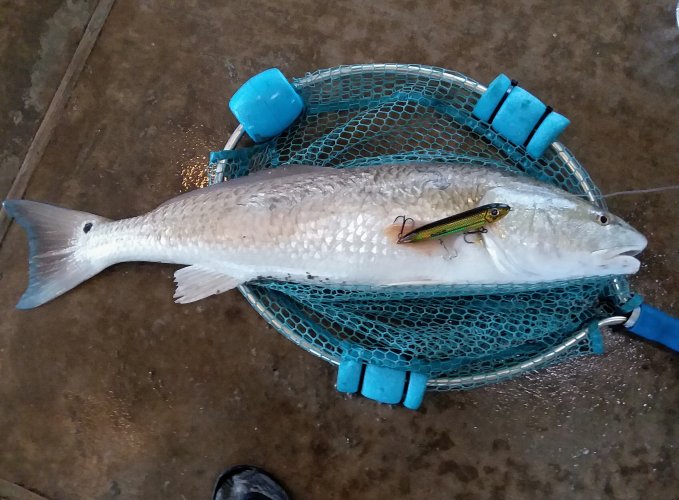 2nd day, water still a bit sandy, trout limit on topwater 15-18", bunch of throwbacks. Also caught and released a ~25" blacktip shark at sunrise, fun to catch but I thought I had a big trout on at first. 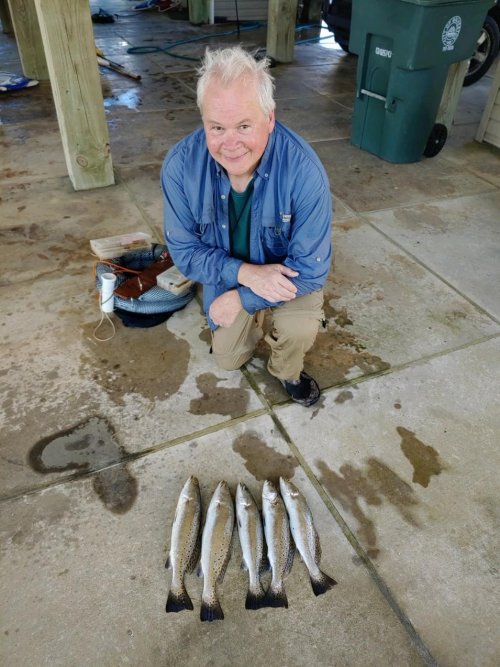 3rd day, water cleared up to 3-4 ft visibility but was not as flat. Topwater wasn't working so we switched to jerkbaits, limit of 15-20" trout, with probably 2 throwbacks for every keeper. 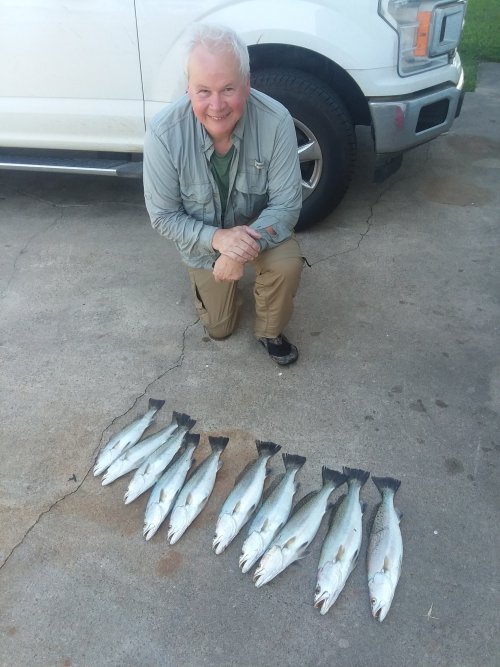 Unfortunately the 4th and last good day I had got a stomach bug, my nephew got his limit and the biggest trout of the trip, just under 23" and about 4 lbs. (2 smaller fish are sand trout) 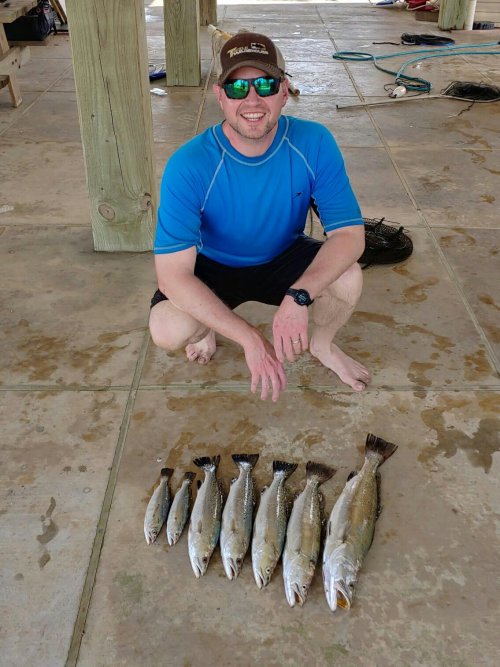 Looks like an awesome time! Cool that your keeping the family vacation going.

nick87 said:
Looks like an awesome time! Cool that your keeping the family vacation going.
Click to expand...

Well, I might have let the "tradition" die out, if I had not found out about the fishing options,

Two of my favorite fish to catch (and eat). Congrats on a great trip!

When I lived in San Antonio, brother and family from NM came to visit. Drove down to Rockport and fished on a long dock. Bought cheap rods at Walmart. We caught several fish each and gave them to some young boy as we came off the dock.
Kid was happy.

Quite a difference from fishing on the the Pecos for gar and catfish.
Last edited: Aug 11, 2021

Nice! Specks are one of my favorite eating fish.

Reds are a bucket list fish for me, need to take a vacation! Great report!

Doesn’t get much better than Topwater trout and drum, pretty work!

Nice!!! Good job n good eats; don’t discount the eating quality of those black tips!!! Just bleed em good n get em on ice quick!
My uncle has a place in Ingleside TX n said they r tearing it up right now in the surf by Port Aransas. Ass was rubbing it in!! Just had hernia surgery n I’m out of commission for a while!!! My parents, sister, brother in law, n nephew r heading down tomorrow!!! Got to love family!!!

I've saved and eaten blacktips before and yes they eat fine. If I had caught it later in the morning I might have saved it, but since I had just got in the surf I didn't want to deal with it.
J

jrabq said:
I've saved and eaten blacktips before and yes they eat fine. If I had caught it later in the morning I might have saved it, but since I had just got in the surf I didn't want to deal with it.
Click to expand...

Completely understand, takes some time to take care of a shark properly, n if the surf bite is on!!! Too much fun!!! Especially on top water! Surf trout r so much chunkier than the bay n flats trout

bobbydean said:
Quite a difference from fishing on the the Pecos for gar and catfish.
Click to expand...

New Mexico is different, that's for sure. But I enjoy fishing here too, after figuring it out (sorta), it just sucks to have to drive 2-3 hours. The two lakes on the upper Pecos (Sumner, Santa Rosa) are on my hit list for bass and walleye, but it appears we are on a down part of the cycle due to the drought and extreme low water levels. Here's a photo from Santa Rosa earlier this year, fished from a kayak because the boat ramp was closed. Tried again in July and got skunked! 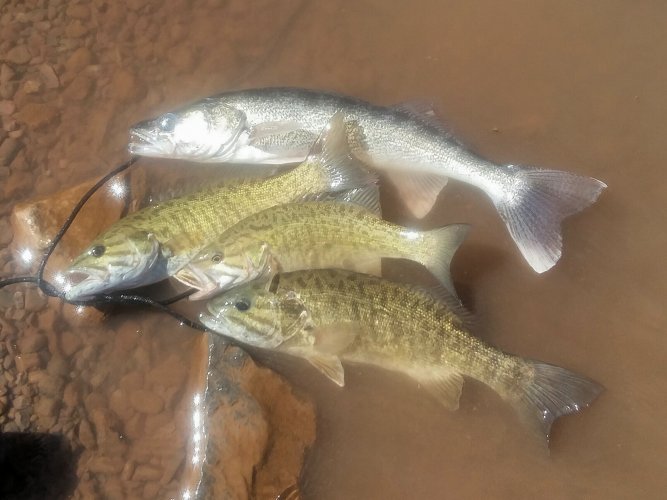 B
Unbelievable, I Can't Believe This Happened!!!