Well, this last weekend was my first hunt of the season and it felt so good! The weather was bad (too hot), the game was scarce, my vehicle was less than ideal, and the hunters were everywhere, but I was so happy to get out and be in the woods again!
I had a rifle bear tag in a unit I’ve hunted many times for various species, but rarely see bears so my expectations for harvest were low.
Friday afternoon I loaded up my wife’s little car and hit the road. 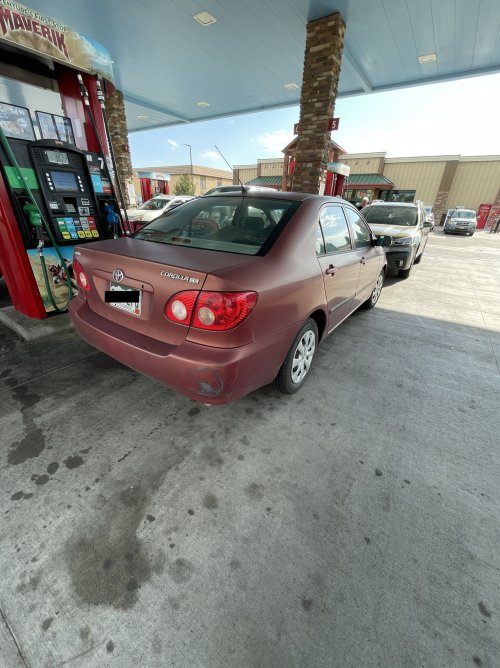 My Jeep is in the shop with 4wd issues (unfortunate timing at I right?) but luckily we have other vehicle options. I made sure to grab the essentials and headed west. 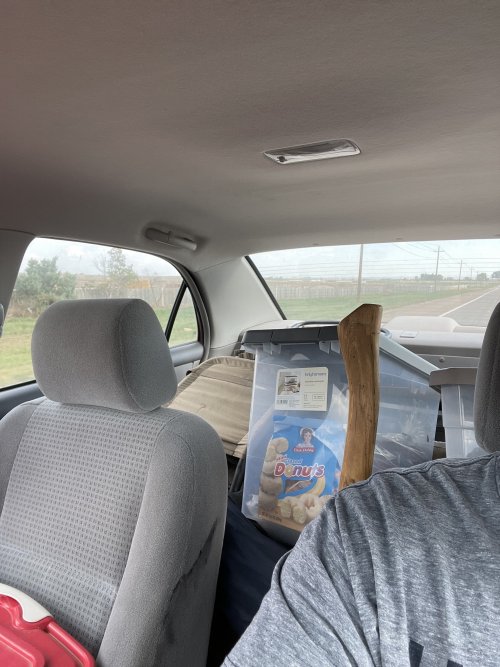 I arrived and set up camp just before dark, ate dinner and went to sleep ready for the next morning.
Morning 1 I walked an old abandoned forest service road near some ponds where my wife spotted a bear last year. Calling it a road seems generous… it was mostly an open piece of ground for the dead trees to lay. 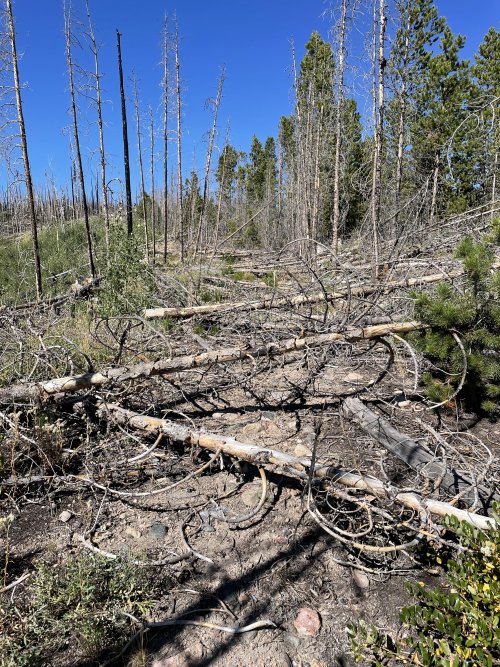 No bears were spotted, but I did jump a big bodied deer that I can only assume was a big buck. I never laid eyes on his antlers unfortunately.
I found lots of berries and the ponds looked like a place that a bear would hang out, but I never even saw any sign. 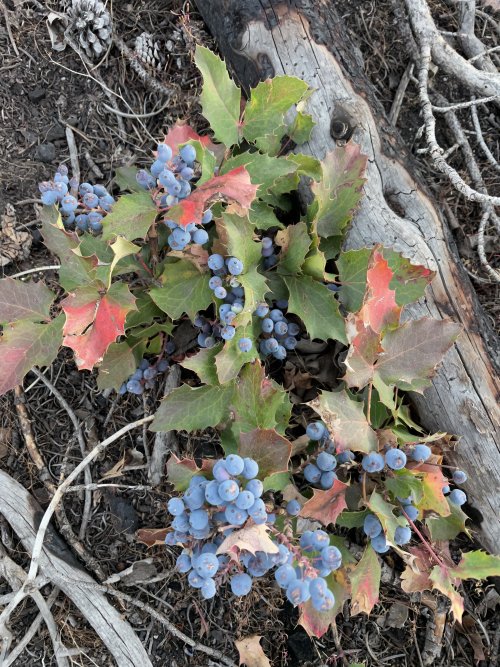 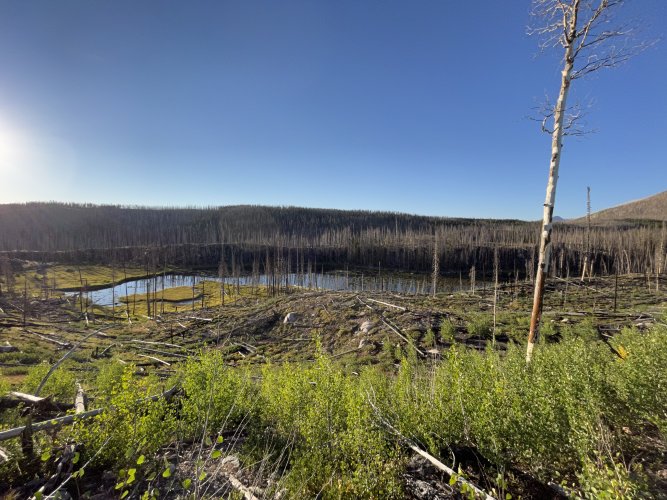 Side note: anyone know what kind of berries these are?
I met some nice guys on my walk out, who said they’ve been hunting this unit for a long time. The older fella said he’s been hunting there since the 60’s. It was cool to talk to them and share ideas about where to find bears.
Mid day I went back to camp and met my dad who would be joining me at camp but wouldn’t be hunting, because he has a whole pack of dogs to take care of. We had lunch and caught up before I headed out for the evening hunt. That night I hunted a few ponds that are close to a road, but they usually have lots of bear sign around them and I hoped a bear might sneak out for a drink. Well, apparently everyone else had the same idea because the road was crawling with vehicles and there were hunters all over the place

. That was my fault, what did I expect? The night wasn’t a complete bust though, I spotted a bull moose: 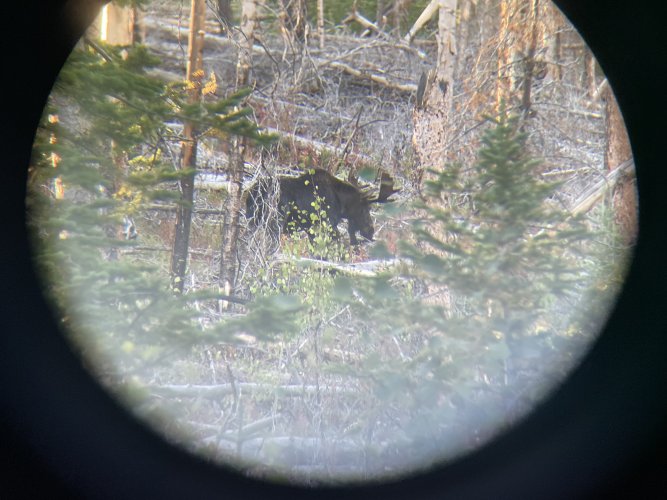 Looks like fun. It’s a Holly grape,
they are edible. They are super sour and taste like brocoilli. IMO.
K

RyGuy said:
Side note: anyone know what kind of berries these are?
Click to expand...

Day two had me headed to a mountain top where I’ve seen bear sign in the past. I parked and set off at shooting light, headed up the mountain side and checking various clearings on my way up. None of the openings held game or sign, but most of the walk was spent in aspen stands with lush green grass. 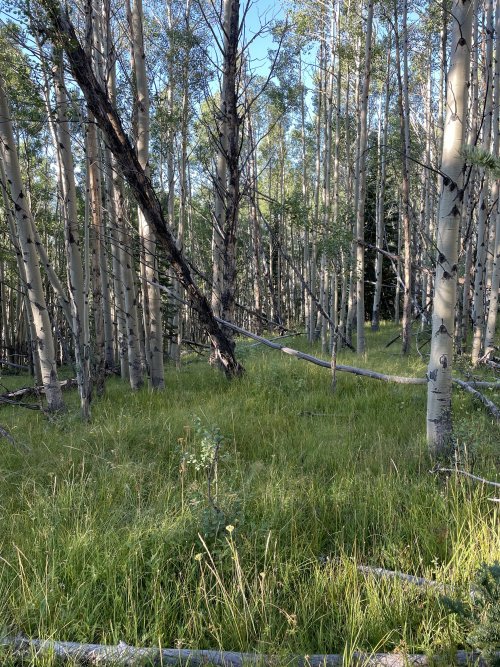 I found some fresh bear scat and figured I was on the right track.
About 3/4 of the way up I nearly stepped on a hornets nest while scrambling over a pile of deadfall. That’ll get the blood pumping in the morning!! No pictures of that one, I was too busy sprinting and leaping over logs headed in the opposite direction.
At the top I flushed a pair of grouse, my favorite wild food! I attempted a headshot with my 30-06 but a clean miss sent the pair gliding down the far side of the ridge. I headed after them, because at this point I’ve given up an bears and am strictly grouse hunting. Unfortunately I couldn’t turn them up again. On my walk back up to the top, I jumped a large animal in the timber just ahead of me. My mind said “probably a deer” so I continued walking ahead relaxed, but when the animal ran across a small opening in the trees 50 yards away I saw a big burly black bear!! Without thinking I gave chase. I heard the bear crashing through brush just ahead as he headed for the bottom of a ravine. I quickly took a left turn and found an opening on my side of the ravine. I could see the opposite slope and anxiously awaited a big black shape to emerge from the trees headed uphill at 280 yards.
He never showed himself again. Must’ve hit the bottom and taken a hard turn to stay out of the open. But it was exciting to be close, and feel like I had a chance for a moment!
The rest of the morning was uneventful as I headed back to my vehicle.
Another question: anyone know what makes all of these rubs in aspen trees? 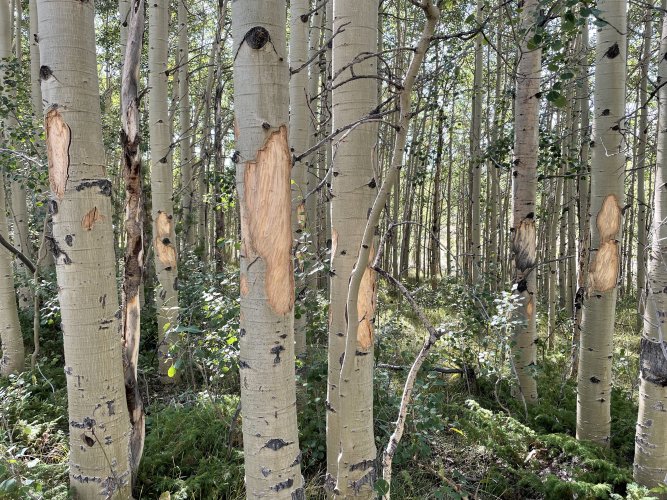 deer? Elk? Moose? Bear? None of the above? They’re all between waist and head high in a fairly large area in an aspen stand.
Back at camp for the heat of the day, luckily I had a camp with a nice view. 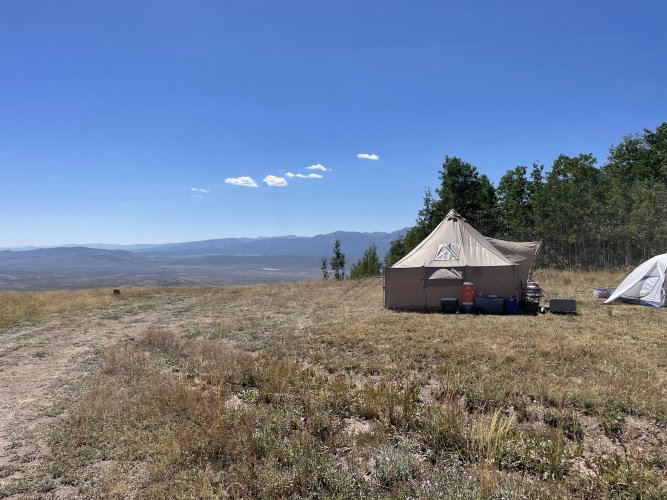 But while minding my own business, this little bastard flew onto the back of my neck and when I swatted, he bit me! 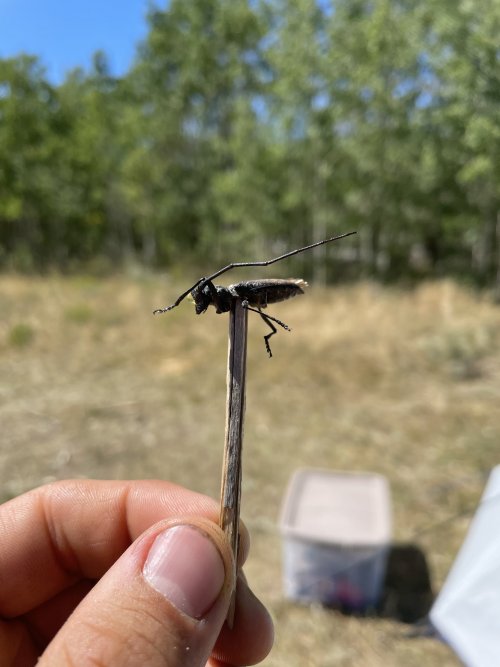 So I skewered him.
The evening took dad and I out to a nice glassing knob. We napped, glassed, played with dogs, and enjoyed a delicious dinner. 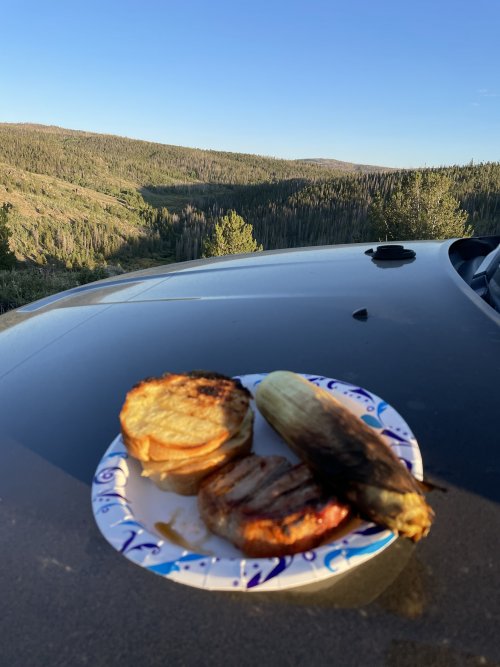 But we did not turn up a bear.

Looks like a solid camp setup. We have a lot of those rubs nearby my home and I'm always torn on whether they are moose / elk - so hoping someone smarter than me knows the answer ha

Looks like good times! IME not much eats Oregon grape other than forest birds.

SnowyMountaineer said:
Looks like good times! IME not much eats Oregon grape other than forest birds.
Click to expand...

Good to know!
I’m fairly new to bear hunting and I’m not great with plant ID so I appreciate the info

Well, day three saw my trip end with a whimper instead of a bang. I went out and hunted a big pond with an old tree stand nearby. My plan was to slip in and sit in the stand… 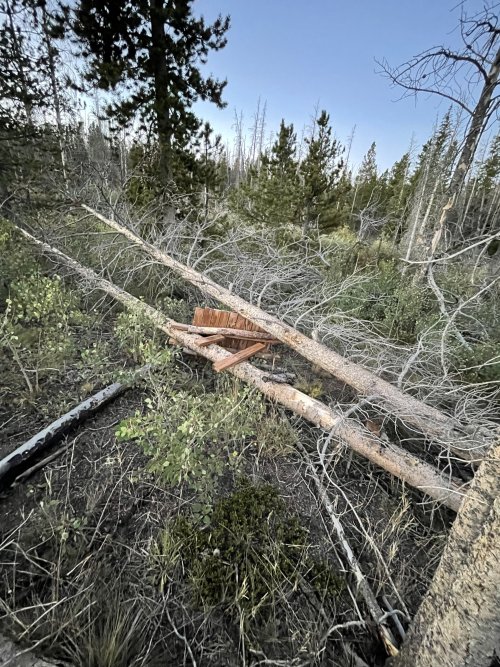 I still watched the water, but all I saw was a bunch of these: 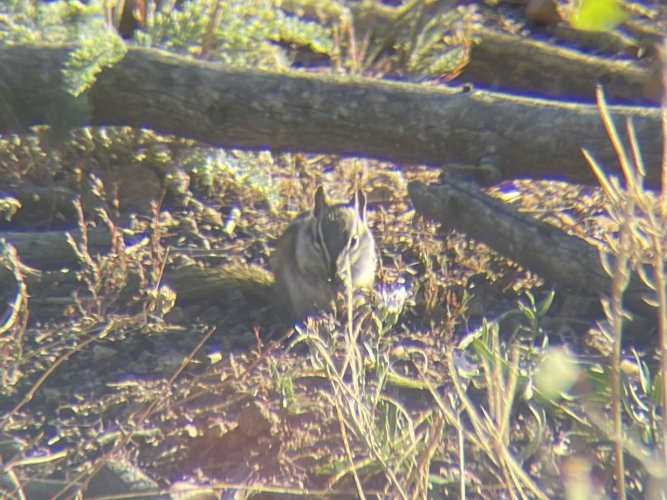 And plenty of pine squirrels. It’s funny how loud they can be! I spent many minutes stalking a squirrel thinking it must’ve been a big game animal rustling around

.
I had a lot of fun and met a lot of kind people that were willing to shoot the $h1t with me and talk about how neither of us were seeing what we were hunting for. Maybe it’s because we were standing around talking on the road? No… must’ve been the weather.
Hopefully my next hunt is more of a hunt, and less of a long walk in the woods with a gun.

Hey, if ya don't shoot em ya don't have to gut em. Always a silver lining. Actually, sounds like it was a great time. Nice weather, great scenery, and good comradery. Thanks for sharing. Wish I'd been along.
N

Sounds like a good time. I think those are moose chomping on the aspens? Not sure tho. I don't think I'd be able to wake up at a reasonable hour after more than one of those trippels!

Thanks for sharing. Porcupine?
B

Elk eat aspen bark in the winter. Almost sure what you're seeing is them scraping chunks with their incisors.
You must log in or register to reply here.