How many of you hunt moose in the Rockie Mts ?
What state do you hunt and have you had any sucsess ? How hard is it to draw a tag in your state and when are you going to invite me on a moose hunt ?( just kidding )
Lets here you moose hunters do a little bragging
W

Anaconda.....I moose hunt every other year in BC......I put in every year for moose in Maine and Colorado....but the only luck I have is the same for slots.....I put my money in and nothing comes out.....very successful in taking moose in BC though....Thinking about Alaska, but thats all so far, just thinking.
D

Well this year in Wyoming I saw at least 7 bull moose, I even got to witness a good fight as well between two bulls. Saw what would be without a doubt a record book bull at 600 yards twice in one week.
My moose hunting though has been in Canada, when it didn't cost an arm and a leg. We used 30-06 rifles for the most part with 220 grain factory bullets. I would love to hunt Alaska, but fear the cost is way over priced for a working stiff like myself.
R

well we drew 2 outta 3 tags last year and put one in the books and one just missed.. but in Idaho its one a life time..so my hunting buddys are done

.. Idaho just opened up its moose tags to out of state draws so this might be a good year to put in for one here...i`m not sure when the deadline is but its gotta be soon...

Some mistakes are too much fun to only make once.
C

Got a nice bull this last fall, 85 yds with 45/70 Marlin guide gun with 420gr Garrett loads. So that puts me out of the running for anymore bullwinkles in Idaho.
As Roper said above, they okay'd non-residents can now apply in Idaho.
Only drawback is that a non-resident has to purchase a Idaho hunting license ($128.50) prior to filling out and sending in the app.
Moose tag,permit & application $1514.50
If you still have the want go to
www.state.id.us/fishgame

Bout forgot, the app dates are from 1 April to postmarked no later than 30 April

I'm from Alberta,Canada here we run on a draw system for moose,that is if you are a rifle hunter.we used to be able to buy general tags but not no more.We do have spots around city areas that you can go buy general moose tags if you are a bow hunter.I put in a draw for calling season every year and I usually get drawn every 3 years that is for rifle hunting or bow if you want tn the years I don,t get drawn I bow hunt around the city of Edmonton in there bow zone only.I had a chance this year at a book moose and I blew it,I stepped on a twig at about 40yards when I was drawing back and next thing I knew he was gone.The last time I seen him he was doing 30mph across a lake.I have taken some excellent moose in this area.This year they are talking about opening a slug season in the bow zone because the population of moose is getting so bad.With are general bow tags we can take either a bull,cow or calf.I have hunted the Rockies for moose but the next time I visit those hills it's going to be for Big Horn with my bow(It takes on average 7 years to get drawn for big horn in the area that I draw for)and I'm on my 4th.
W

I shot my first moose this last hunting season in the Jackson Hole area. It was a great hunt and more than I expected for my first stab at moose hunting. A nice bull for my wall and lots of great meat for the table. memories for my old age, older age .wh
M

Anaconda; I would reccomend Wyoming.To be exact, Western WY.(Kemmerer north to the Jackson country). I lived in Kemmerer for 11 years and on one occassion(during hunting season) saw 11 or 12 (can't remember exactly) moose on one ridge( all seen with the naked eye), and I don't know how many were there that I did't see.Several years later ( again just north of Kemmerer) I saw 9 on one ridge.
I took a nice bull, north of Afton in 1989, which was over 49" wide.
Lot's of moose in this region, some good bulls,tough to draw!!-memtb

In June '98, I drew on the "once in a lifetime" Idaho moose permit. I wasn't sure when I was in New Zealand if my wife had actually put in for me but she did. Somewhere, something had to give, so I made a deal with Vicki (my wife) that if I drew on a moose, I would forgo elk and deer that year, (since I broke in my new 300 win mag last year with both an elk and a deer.)

Waiting for September to come around made the summer long. Keeping busy at work with long hours made it go by faster (and also helped in finding a way to fund all my fun.)

September 25th came and I headed with my dad to Unit 66 (the backside of Palisades.) I caught the last 5 days of elk/deer which overlapped with my moose hunt, (how convenient for me.) Although seeing lots of deer, elk, and some moose, not many shots presented themselves. Those who have been in the field with just a bow and arrow in hand can relate.

October 1st, with just moose on my mind (with all other seasons closed), we set off to find my moose. With the cold weather moving in finally, the snow level in sight, and the moose rut about to peak, good times were sure to follow. The cold morning of October 2nd was great. After reaching our lookout point that morning, we could finally stop and enjoy the view. Elk were bugeling everywhere! (They must have gotten a hold of the hunting regs again that year because they started bugeling the day after the season closed.) The sounds of moose grunting helped us locate a nice bull nearby. I put the stalk on. About an hour later, with a nice quartering away shot, I stood over the moose less than 40 yards where I first released my arrow.

AND ANACONDA.... Moose is NOW OPEN FOR NON -RES in Idaho!!!! They want a friggin Arm and a leg for itthough....

If you EVER EVER want to hunt them.... I would turn ya on to a nice one.. I still have several tied to the tree

Anaconda said:
How many of you hunt moose in the Rockie Mts ?
What state do you hunt and have you had any sucsess ? How hard is it to draw a tag in your state and when are you going to invite me on a moose hunt ?( just kidding )
Lets here you moose hunters do a little bragging
Click to expand...

I live in Alaska so naturally I hunt moose here. I hunt moose mostly in low country where you need a boat to get around. I have been successful and I believe that most tags are over the counter but most areas have antler restrictions for non residents, 50" or 4 brow tines.
Last edited: Mar 27, 2021

OldSnort said:
I live in Alaska so naturally I hunt moose here. I hunt moose mostly in low country where you need a boat to get around. I have been successful and I believe that most tags are over the counter but most areas have antler restrictions for non residents, 50" or 4 brow tines.
Click to expand... 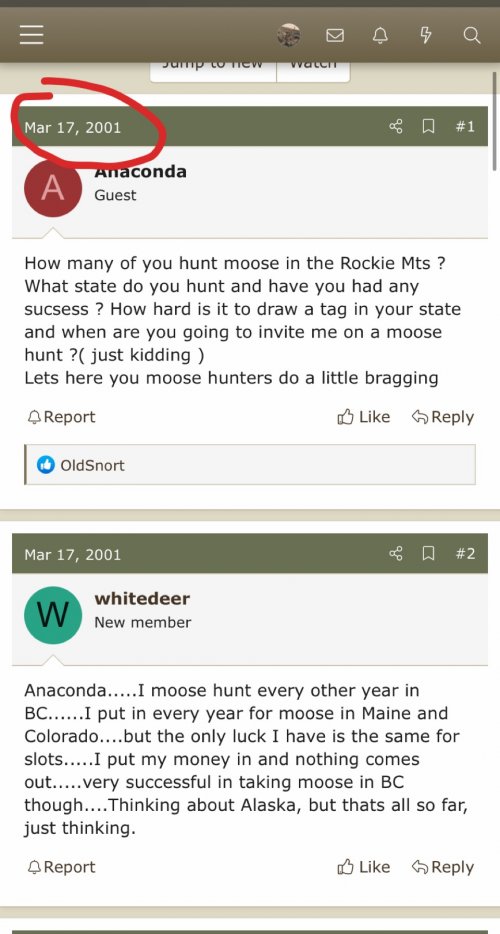 Only if you are young
You must log in or register to reply here.

A
Using scents to attract moose ?