Headed to Montana Sept. 1 to bowhunt for elk. Plan was to hunt the Scapegoat Wilderness, so our initial destination was Great Falls. Ran into a grass fire outside Jordan, Montana that required a 4 hour detour. Finally got to our destination a day late due to the detour.
We were at the parking lot for the trailhead for the Scapegoat, and ran into a young guy driving a dump truck. He was from Lincoln, and said he didn't know much abut the Scapegoat, but had a spot near Lincoln where he regularly filled his tag. We drove up the road a bit after talking to the truck driver, and it dead ended at a Bible Camp. We met the camp groundskeeper, and he painted a very poor picture for our odds of scoring an elk in the Scapegoat. Said he hadn't seen an elk in the Dearborn Canyon in 10 years, which we later learned was BS. Who, if not the groundskeeper for a Bible Camp, can you trust to give you the straight scoop on where the elk aren't?

We left the trailhead and drove to Lincoln. Camped at the Beaver Creek federal campground in the Helena National Forest, which proved to be fortuitous, because we were only a few miles from Lincoln. We were pulling an enclosed utility trailer with a full size fridge running off a generator to keep our food cold. The 5th day into the trip, the generator crapped out, forcing us to make repeat trips into town to buy ice to keep our food from spoiling. Also made several trips to the hardware store to buy things my buddy forgot at home. The third day there we got a visit from Ezra, the local warden, and discovered that while my buddy had his elk license, he did not have the tag, and we were both short on the required archery license. Ezra was a nice guy, and told us we could buy what we were missing at the hardware store in Lincoln.

With the exception of two days(we got snow one day, and 60s the next), temperatures were broiling all other days, with some days in the high 80s. It was godawful weather to try to hunt for elk, and nothing was moving and everything was silent. As the week went on, we learned everyone was struggling to see and hear elk. We covered a lot of ground in the high, 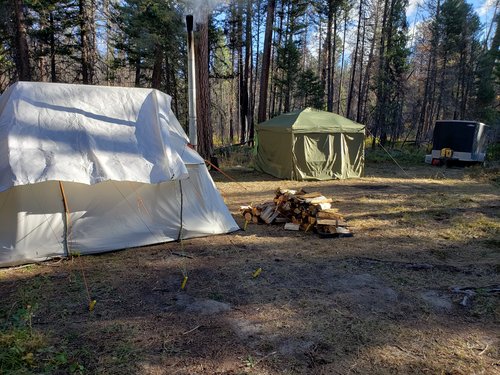 dark timber, but it was all in vain, with the exception of three grouse that we shot one morning. We also managed to catch some fine trout and white fish in the Blackfoot. After a week of beating our heads against the wall, and with another week of more hot temps coming up, we threw in the towel, broke camp, and headed for home. 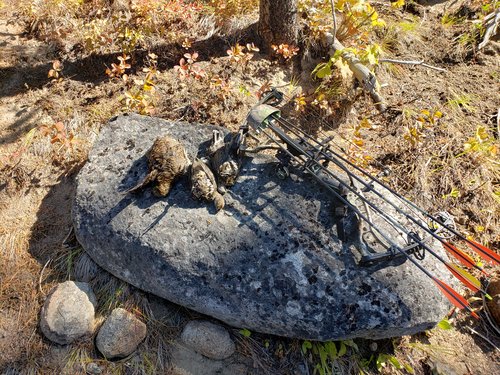 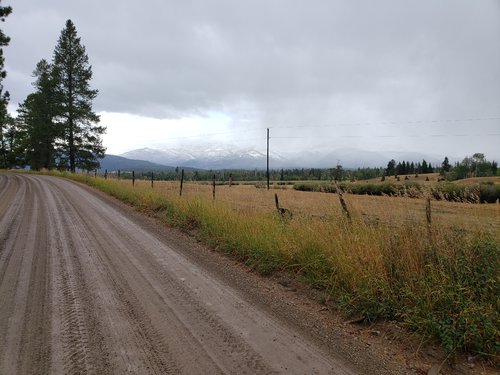 Tough to claim a spot in the 3% that are good enough or lucky enough to kill an elk with their bow.
I would bet after some time to think about it you will be fired up to try again.
S

don't let it get you down- persistence pays off!

How many miles did you cover looking for elk? Generally speaking if you cant cover 5 miles in a day in a new area you most likely will struggle finding elk. Just saying.

Mallardsx2 said:
How many miles did you cover looking for elk? Generally speaking if you cant cover 5 miles in a day in a new area you most likely will struggle finding elk. Just saying.
Click to expand...

I have hunted elk for many years with a bow and am no stranger to how difficult it can be to locate animals. Kind of hard to tell how many miles we walked when it is all up and down hill. We burned our share of rubber.
As I said, we weren't the only ones not seeing or hearing elk. We talked to many other experienced elk hunters and everyone was coming up empty. The hot temperatures were not conducive to elk movement or bugling. If I did it again, I would go out two weeks later, but in hindsight, much of the West is still experiencing very high temperatures, and we are a 1/3 through October.
You must log in or register to reply here.

Saturday at 6:46 PM
Cody Richardson
C
B
Was this a normal year for elk?