Oak and I thought we'd just post a bunch of pictures of some antelope we've taken lately.

I found this buck yesterday while hunting with Oak and was able to get him. Its a good antelope and I'm pretty happy to get him. 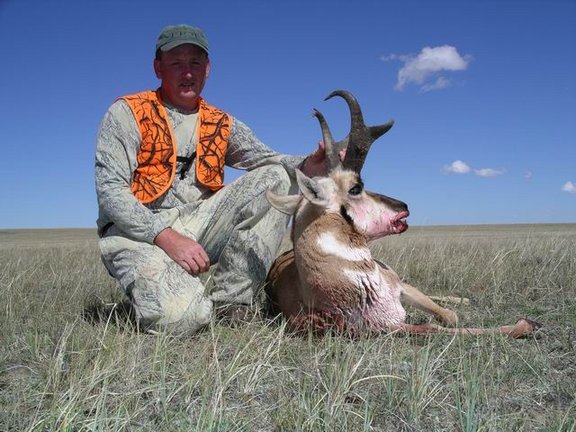 I also took two doe antelope with my muzzleloader, one at 72 yards and the other at 94 yards. These are the first big-game animals I've ever taken with a muzzleloader. I only have pictures of one right now, but I'll post photos of the other one later tonight. 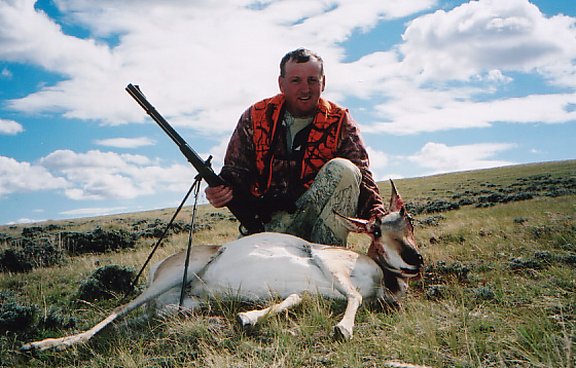 Oak, jump in with your pictures, they're worth a look.

Buzz came down to Colorado 4 weeks ago and helped me chase the elusive doe antelope. I managed to bag two in about three hours to start the 2004 season off right.

Last Friday Buzz, Doug and gave it a go in Wyoming. While we had the spotting scopes set up and were doing some glassing, I spotted a mountain lion making his way across the hillside in the distance of the picture below. Classic mountain lion habitat.

After some good hiking and glassing, we spotted a good buck bedded near a herd of does. He was kinda hard to judge, but had really good mass. We decided that somebody needed to shoot him, so Buzz and I took off, with Doug watching from a distance. After a classic antelope stalk of about 45 minutes, including a good belly crawl through a field of prickly pear cactus, I managed a 200-250 yard shot on this fellow.

Here’s all three of us with my buck.

Hopefully a trip back to WY in the next week or two will net me my last antelope of 2004.

Just how much Jerky can you guys eat????


Congrats on the hunts. 'Lopes are about one of the best ways to spend a September day...
Hey Buzz,
Just exactly where were you aiming on that Doe?? Trying not to waste any meat???
M

Oak it looks like you shot the buck clean through the eye.
B

That doe looks like it was shot in the head, but it wasnt.

I was trying to hit it in the shoulder as it was quartering toward me. I shot just a pinch forward and got it through the base of the neck.

I tell you what though, a 295 grain powerbelt ahead of 100 grains of triple 7 puts the hurt on antelope.

The second one I shot, broke the near shoulder and exited about 3 inches behind the off shoulder. It went about 20 yards and did a nice flip over the sagebrush.
I

That's a nice bunch of antelope! Congratulations! Imagine seeing a lion out there! If some hound hunter put dogs on a lion out in that country there'd be a helluva fight pretty soon!

Some pretty powerful looking pronghorn hunting going on there. Congratulations! So, what is Doug going to shoot, or did he shoot already?
D

Congrats to you both.Hey Oak! I know back home in Arizona them Lion's get pushed out of the mountains because of the lack of game and or they are just migrating from one range to another.
Picture the desert country near Tombstone and picture a bear track out in the middle of that desert,yep!classic bear country hahahha! Daniel
S

Great bunch of goats. Way to go all of you. what is the limit on them?

Heres the picture of my second antelope doe with a muzzleloader. I'm kind of liking the muzzleloader deal and how they perform. 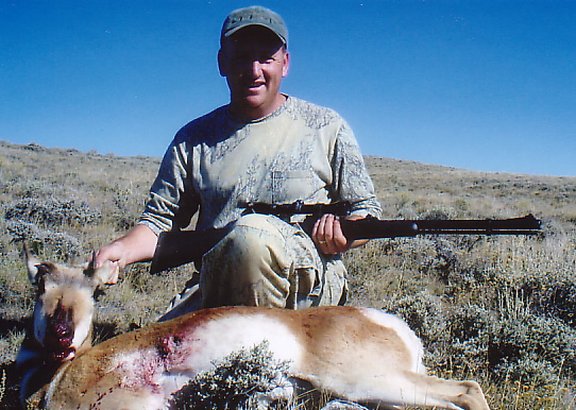 Congrats buzz and the rest of the guys......you guys are having a fantastic season so far !!

Buzz and Oak congrats on the goats- nice mass on those speedsters!! Had to laugh about the "lion country"...they just popped one Saturday afternoon (immature male of around 75#) in the backyard of a place around the corner from our house. We average a "town cat" about once every other year...guess poodles make for a nice snack!


Looks like we will be sneaking up on Oscar...I will help out shortly!

Congrats and thanks for sharing the pics!

I went up this morning and filled my last antelope tag. Another trophy doe.

Nice batch of speed goats guys. Makes me wish I lived in Wyoming or Colorado.
You must log in or register to reply here.

Drove to Nevada and only saw 4 antelope