Your work will pay off and success will be sweet after all the effort you have invested. 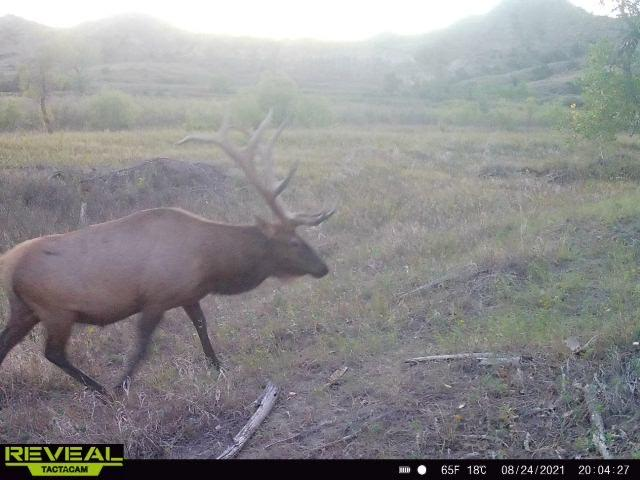 Anyone have a field judging guestimate on the above bull?

Got any other pictures?

EYJONAS! said:
Got any other pictures?
Click to expand...

I do not, that's the only one my cell cam got on the pic.
T

Tough with one picture but I would guess low 300’s. Certainly could be better though.

timmy said:
Tough with one picture but I would guess low 300’s. Certainly could be better though.
Click to expand...

You could certainly show us some great Montana muleys.

timmy said:
You could certainly show us some great Montana muleys.
Click to expand...

I’m relying on you for that . I only have 1 region 7 doe tag tho darn it
B

I would say he's pushing 320 to 330. I shot a 344 bull in ND about 10 years ago and he does not appear too much different. Maybe a little shorter on his fronts but that's about it.
B

Get him @NDGuy
We are pulling for you.
Keep us informed.
T

wnc2500 said:
Get him @NDGuy
We are pulling for you.
Keep us informed.
Click to expand...

If you see a good suburban wave on your way by lol. Good luck! 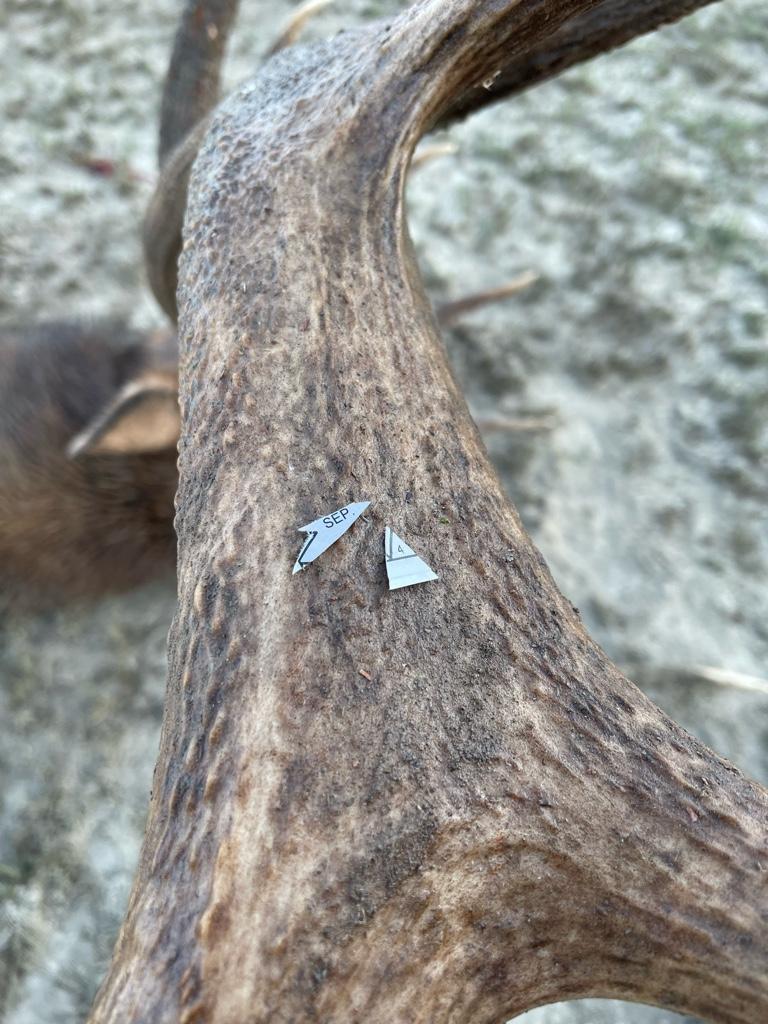 I believe I just seen your picture on FB. Very nice bull. Congratulations. Can't wait for the story.
F

Anxiously waiting for pics and story !!

Still on Cloud Nine…. it was the hunt of a lifetime, literally. To re-hash this year I was lucky enough to draw a North Dakota elk tag. Because we have a limited amount of elk here, these tags are only attainable once in a lifetime. You have less than 1% chance of drawing and there are countless people that put in their entire lives and never draw. I was in unit E4 which covers the north side of Medora and Teddy Roosevelt Park. It’s a small unit with 9 other tag holders in addition to the dozen or two landowner tags they give for depredation. We have the unit to ourselves for the first weekend and then the E3 tag holders and us can hunt in either unit interchangeably. Historically E4 has held a lot of elk close to the park so it’s arguably the “premier” tag of all the OIL tags we give out.

After months of obsessing, organizing gear, practicing calling (Thanks @ElkNut!) I left early Thursday morning for Medora. Season started Friday and in my small unit for opening weekend I already had a solid plan laid out and decided I wanted to take more vacation days with a rifle in hand vs scouting. My brother, and good friend joined me and through him acquired some good land access as well as opened a new network of landowners to reach out to. Some of the nicest people on the planet and most were at least willing to give general advice and ideas for me.

We scouted Thursday and found a complete tanker on TRP and he was bedded within 400 yards of the grasslands border. I wanted to give it a shot even with our private access because this bull was massive and after opening weekend this part of the unit would be ripe with other hunters. The bull was with 20 or so cows and was bugling so we figured we might have a shot to call him off the park or catch him outside of it if he was rounding up other cows we had seen in the area. It was a mile or so walk from our parking spot so we got up and started walking 1.5 hours or so from shooting time. Boy did we misjudge terrain lol there was a creek bed that we figured was dry and easily walkable, it ended up being a steep 30ft down creek bed. We had to open OnX and navigate a good route to get around it because it was too deep to safety climb in most spots. lol Eventually we made it to where we wanted to be and got setup.

About 20 mins before shooting light we heard some bugling pretty close to us. All of us had the hair start to stand up on our necks haha. I’ve never elk hunted so this was my first time hearing a real elk bugle. The addiction is real! I started bugling back to him and we could tell he was moving our way. As it happens on public land sometimes, 5 minutes before shooting light we heard a truck rumbling coming up the grasslands two track not far from where we were. Sure as chit, a damn truck pulls up all the way to the park fence. Initially we thought it was G&F or a rancher but lo and behold out step two gentleman wearing orange. With lights still on and the daylight starting to show the fellas in the truck let out some bugles. Best part is they were between us and the bull, so we relented and moved to another area we had seen elk. We walked a few miles and ran into another elk hunter coming in from the opposite side as us. Chatted a bit, he seen a good bull in here as well and it was a different one then we did but unfortunately was in the park so he kept moving. I warned him about Truck Hunting Mcgee and we went out separate ways. Now with two hunters on both
ends of the stuff I wanted to hunt we hiked back out to regroup and plan the next move. 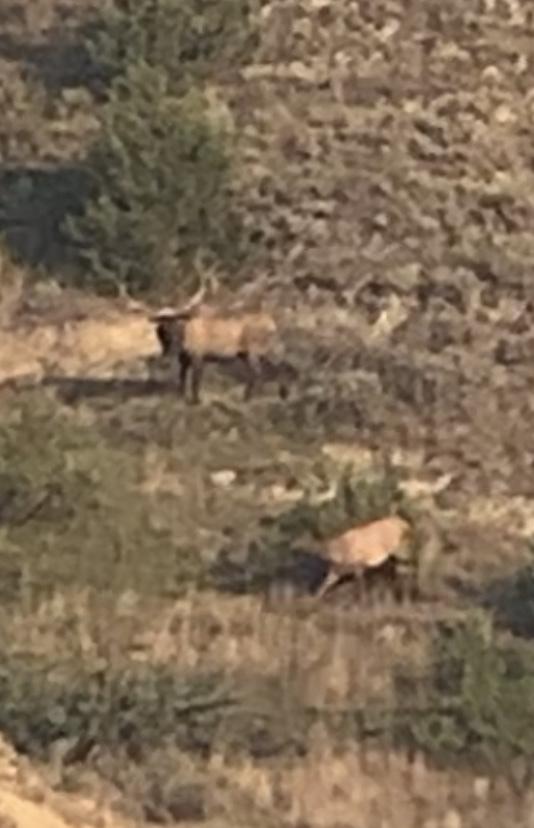 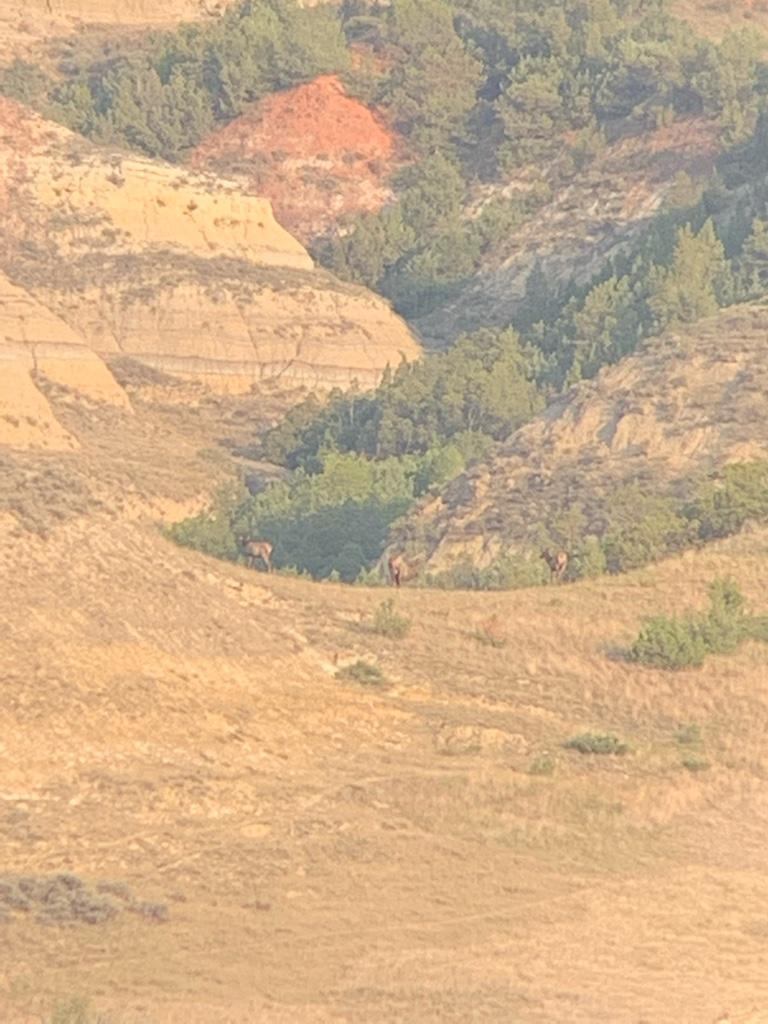 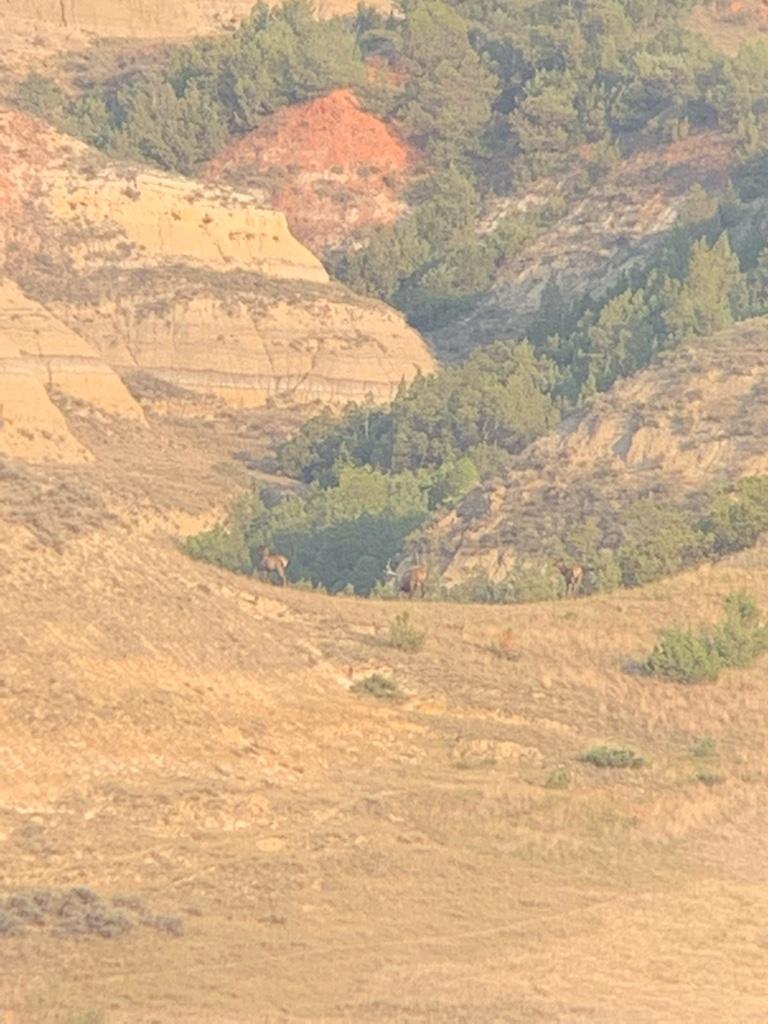 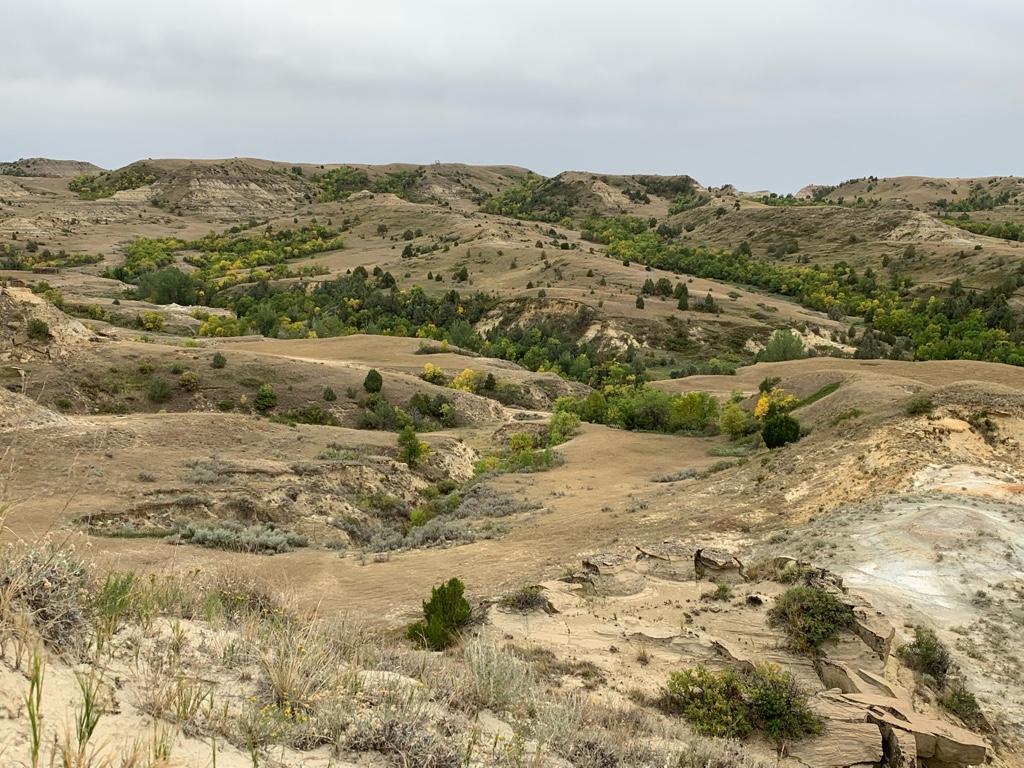 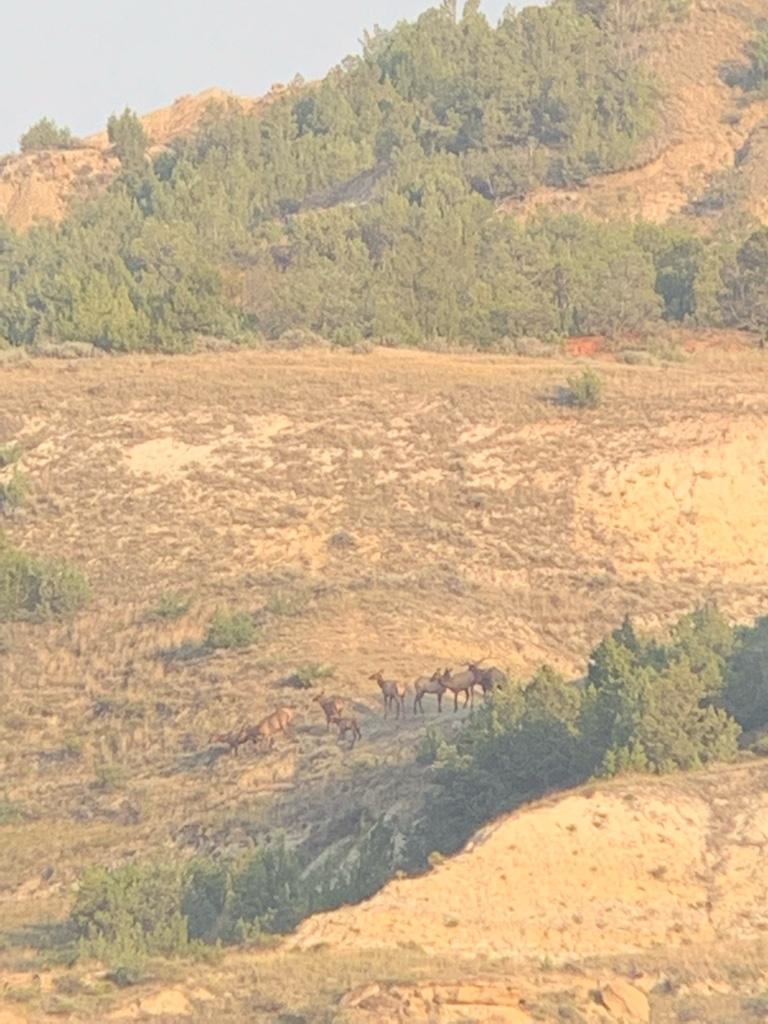 We hadn’t checked cams at my main spot and knew a lot of hunters were near it on the public stuff so I figured after opening morning a lot of elk would get pushed onto it or the park nearby. So we packed up camp and headed over. We took a nap and headed out around 4pm to setup. My brother and buddy stayed high to glass on the butte overlooking the property and I went down to the river bottom where the elk usually move through towards dark. Somehow got cell service so about 45 mins after settling in my brother called me and said there’s other hunters on the adjacent property across the river and on the grasslands next to it. They also said there’s a bedded bull up there drainage on the private land. He looked decent but they couldn’t get a good side view of him. Didn’t matter because he either caught someone’s wind or something else spooked him and he hightailed it out of there! Someone must have been watching him because they started chasing after him once he crested the flat top haha.

Not long after brother let’s me know that a pile of elk came out of the trees and sage brush in the bottoms and started grazing. No big bulls only spikes and rag horns with them. Didn’t take long though about 2 hours before sunset we heard a faint bugle, that started to become louder and more frequent quickly. Brother texts me 2 GIANT bulls and one really nice one working their way to the cows. The next hour and a half is what I’d imagine all elk hunters dream of. Screaming and I mean screaming prehistoric sounding bulls rounding up their cows. I being so low elevation wise never got to see the action only hear it but the other two said it was the craziest thing they’ve ever seen. The bulls were spinning in circles, smashing up sage brush, chasing cows and eachother all the while bugling, lip bawling, and chuckling. It was pure elk heaven as much as I can imagine it being. Soon after I started getting in on the fun and started challenge bugling at them, they did not like me swooping in on their ladies and started running towards my location.

They closed the distance to about 600-800 yards and stopped. (again I can’t see anything this is all 2nd hand from my brother) They didn’t want to leave their cows but the whole herd started coming towards me albeit slowly. I would challenge bugle and wait for them to answer trying my best to not overcall. About a half hour with shooting light I started cow calling mixed with my bugles to try to get those bulls more interested but it just got too dark and I didn’t want to risk bumping something or letting a big bull spot me. I snuck out bugling as I worked my way back to the truck to let them know I was further into the property. Also I found out later from the adjacent landowner as I was leaving a nice 6 point bull was within 100 yards of me being able to see and shoot him [emoji2369]. My brother and buddy said the cows and nice bulls stayed on the park but were bedding close to the land we were on and knowing that we knew we had a great shot for the morning sit. 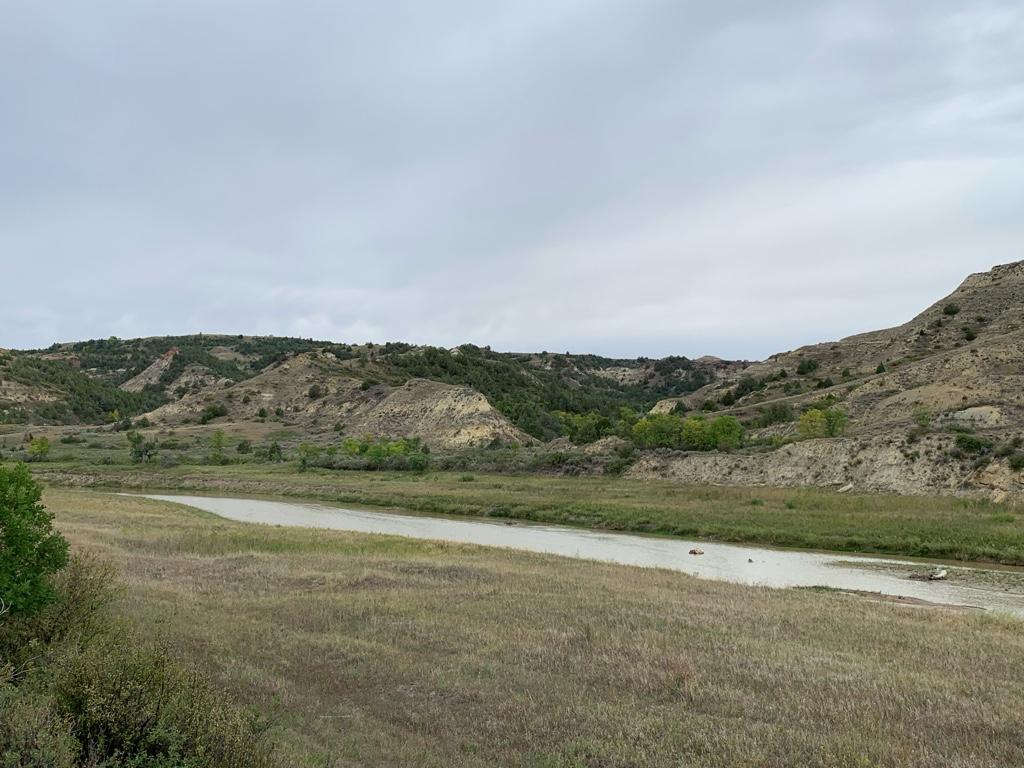