I'm on the ground, but stationary this morning. Giving one of the heavy sign spots I found during yesterday's still hunting a try. About 2 miles from the stand I was in last night.

To my East is an unharvested grain field. To my West is another spot of very heavy sign ( which i suspect is night activity, then the road, then private. The wind is blowing hard from the south. It is cloudy at the moment. I think a west wind where I could set up right inside the field edge would be better, but that's not in the forecast. I'm set up tucked in a line of cedars. My hope is that they come in here on their way back from over by the road / private. 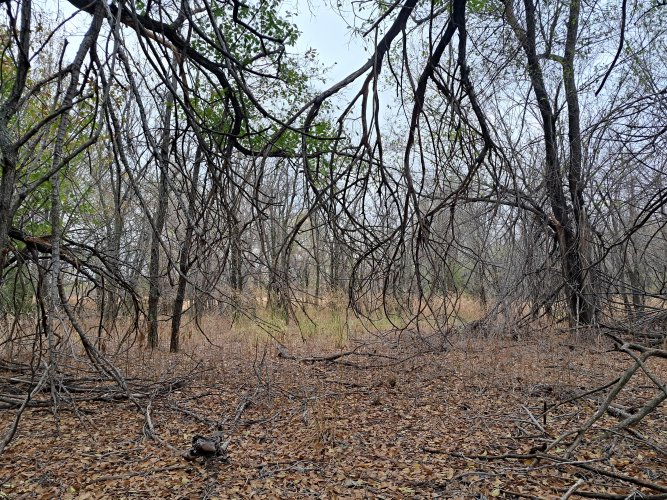 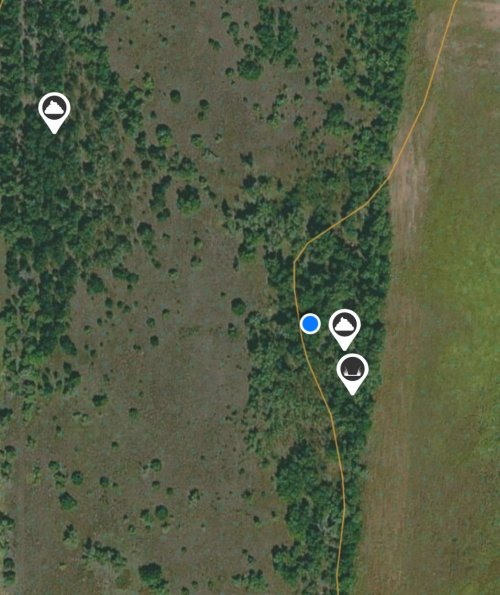 vanish said:
Ironically, I had just explained to my dad last night that I set up specifically where I thought I would NOT have the deer walk directly under me, but rather 15 yards in front broadside.
Click to expand...

Unfortunately had to stop the live updates as I burned through my data in record time. Figured that was a sign I was spending too much time on my phone, so I put it away and focused on the hunt.

I bumped a deer right as I was sitting down this morning. Half an hour later, a doe materialized in the exact same spot. Just as I was drawing my bow, she moved out of my opening. I had another opportunity 10 yards later, but despite my calling she couldn't hear me over the wind and walked behind the cedar and out of my life.

I stayed for 2 more hours then decided to do a still hunt loop. It wasn't worth it, as the terrain was just too thick to stalk.

As I was headed up the road back to my truck, I looked to my right as there had been a lot of sign there yesterday and sure enough, a buck was standing there with a doe not 30 yards away, with me standing in the middle of the road. They bounded off but I saw the doe stop after 50 yards or so, so I figured what the heck, ill swing around and try this hunting close to the road business. 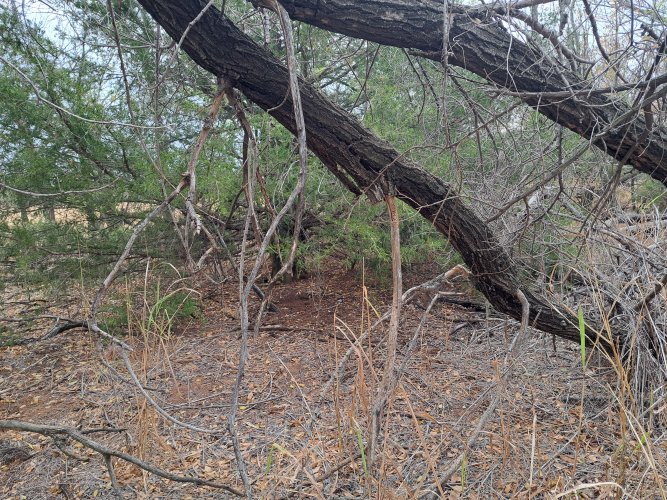 I found another couple cedars not too far away and snuck in from upwind, setting up my stool. At 1045, I saw an odd half circle and using my binos identified it as a doe. I watched her work in from 60 yards to 35 over the course of several minutes, where she passed behind a dropping limb. I drew, knowing she would be at 30 and in the clear when she came out. Just before stepping into the opening, she decided to bounce ahead for 20 yards or so. What the heck? I no longer had an angle on her, and joked to myself I would probably jump her when I headed back to my truck after noon. Yup, that's exactly what happened. 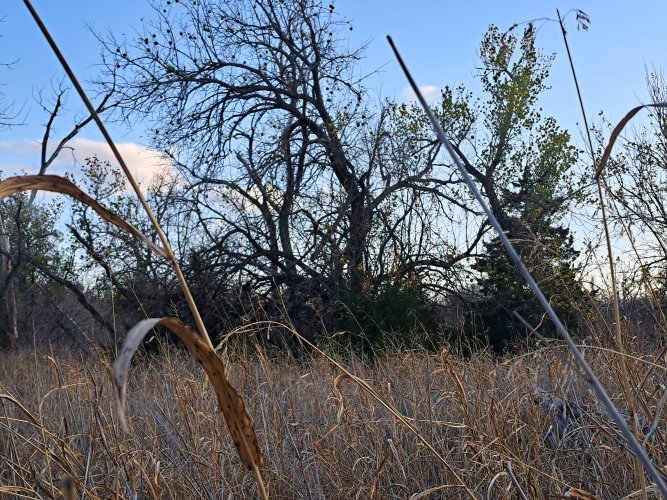 I hemmed and hawed about where to go this evening. It's hot and the wind is blowing 30+, so I decided to set up near this "hole" I jumped deer out of both the first two days.

There wasn't a lot of options so I very quietly nestled into the grass and crossed my fingers that something would stand up before dark.

Well, things did not work according to plan, but I did have some encounters. Within 20 minutes, I heard a snap and lo and behold there is a doe standing 15 yards over my right shoulder, appeared to be on her way to the hole - not leaving it. She was in a terrible spot and despite being in range I couldn't move.

An hour later, over the wind I heard "swoosh swoosh" but could not place it. 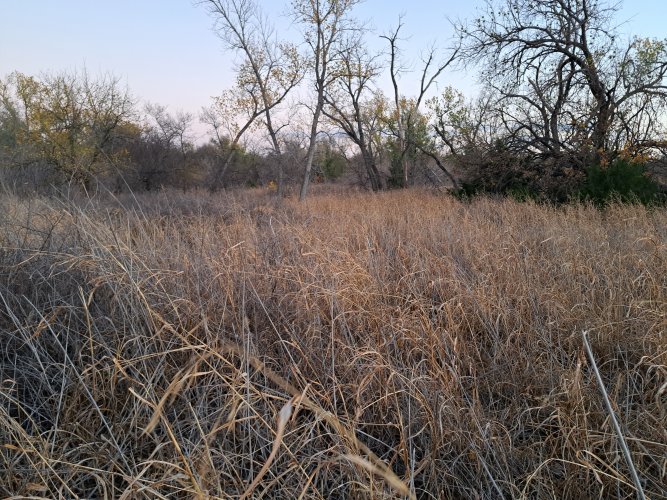 Next thing I know there is a spike like 6 yards away over my left shoulder. I'm unable to move again, and he busts right through the hole. Nobody follows him, so I guess I was set up on nothing. Ah well, still produced some fun.

Great stuff vanish, stick with it.

Edit: I totally left out this morning! It will be in the next post.

The cold front wouldn't be here tonight, but it would be cooler. I knew I wanted to be in my stand, but with a change to North wind, I debated whether I should move it. The ideal spot would be right on the point of the marsh, but I couldn't find a tree that seemed even remotely workable, so I decided against moving. 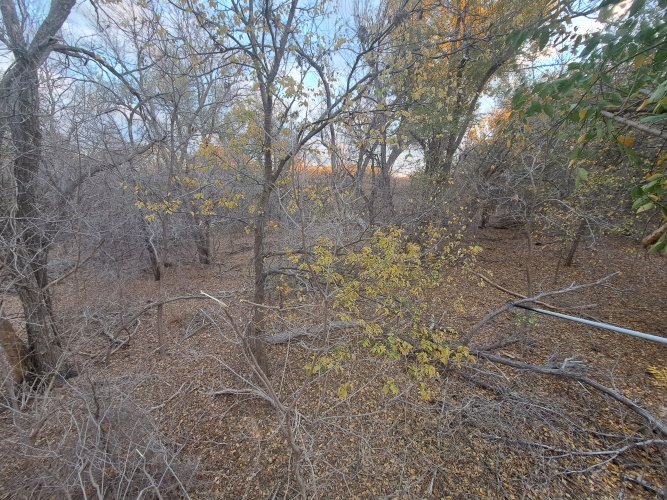 At 330, I heard a swish. It's really windy so it can be hard to tell when it is an animal. A few minutes later I hear something again, and spot a young buck over my right shoulder. This is a no shoot zone, and he manages to stay in that zone moseying south ( so much for into the wind ).

At 5pm I see a deer pop out of the dry creek. The same window I saw the ones come through a couple nights ago. She works toward me, this time turning right and following "the plan", taking the trail to give me a 20 yard shot out front. I got a perfect pass through and could see my blood covered arrow from the stand. ( I would later find out my age guess was wrong and it was a lone fawn, darn. ) More meat!

At 520pm I see another coming in. It doesn't seem to know where it wants to go, and beds down 25 yards out. Oh goodie, now I get to hold still! It finally starts moving again at 545, and wanders by at 10 yards, directly down wind. 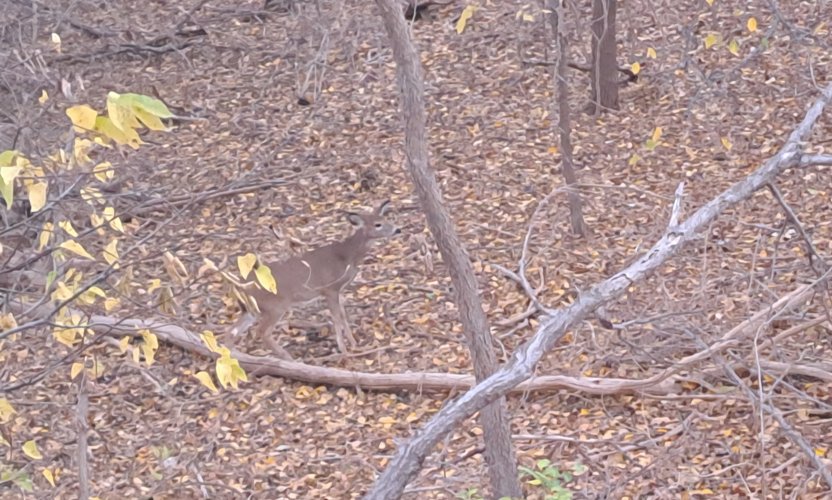 As it continues on, I see 2 more deer appear in the gap, and 2 more, and 2 more, but they are all lollygagging. Shooting light runs out just as they start hitting my shooting lanes. I can barely make out one being a buck, but can't see the others well enough to know.

Four of them make it behind me without alarm, but the buck and another both catch my wind and get antsy, blowing. Hopefully they aren't too buggered, as the cold front is coming in now amd I'm hoping tomorrow there is more daytime movement. 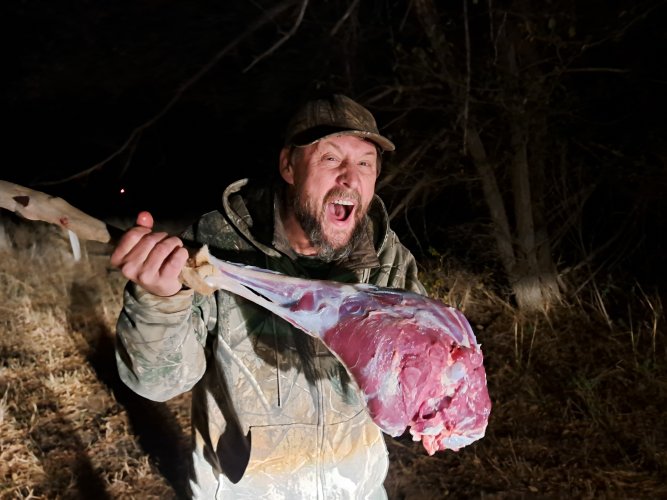 With the forecast indicating a wind switch early in the morning, I didn't want to be in my stand with the feeling the winds would get squirrely. They would start coming from the south. 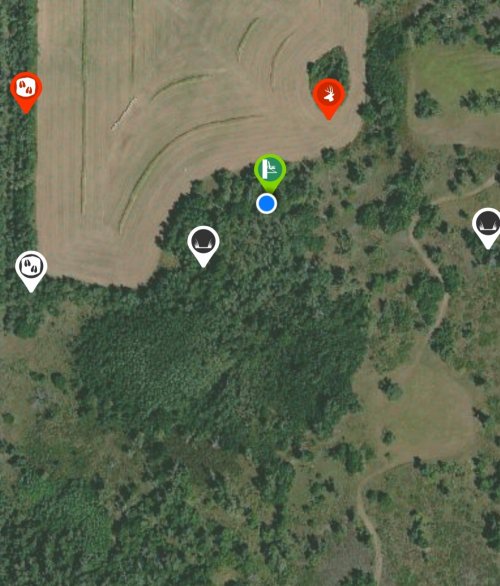 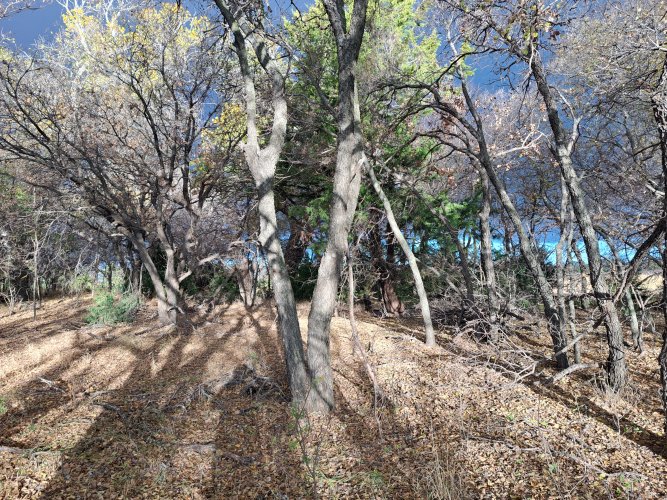 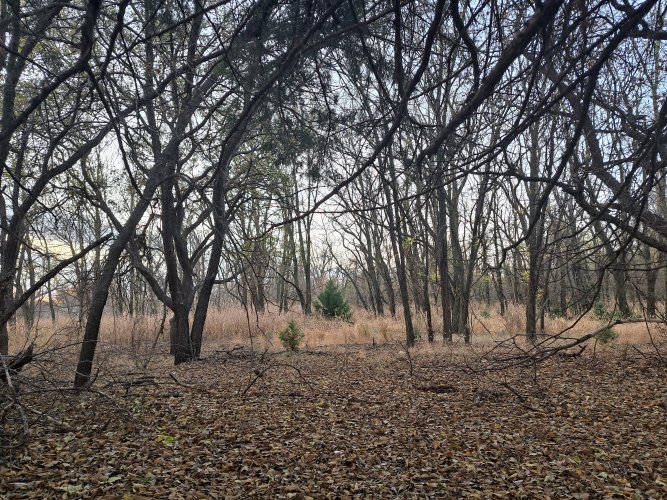 I set up on the ground inside some pines, looking out over a trail just inside the grass line. Behind the pines is an open field, and to the East is "the hole" I hunted the night before. I had still hunted this area the first night we were here and found deer.

I scraped out a clean spot and set up my stool. Within 5 minutes a big doe came in on the trail, with 2 more deer following, but she had heard me and was looking for whatever had made the scrape. She was nervous and the 2 followers bounded off, but eventually she calmed down and gave me a shot. As shooting light had just started, I missed a small horizontal branch and my shot deflected under her. 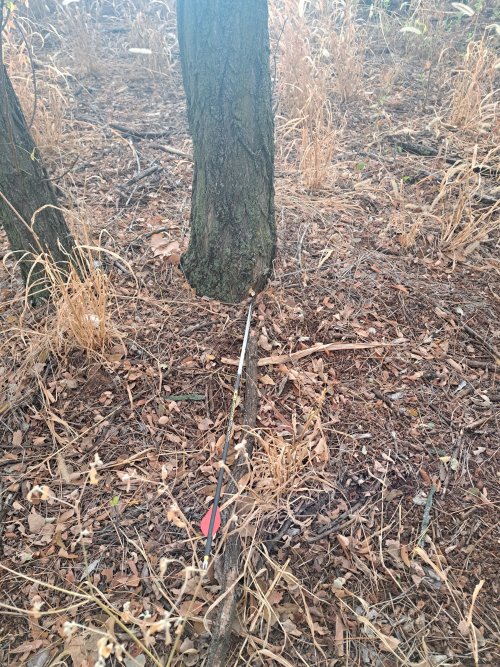 I was visited by a neighbor. 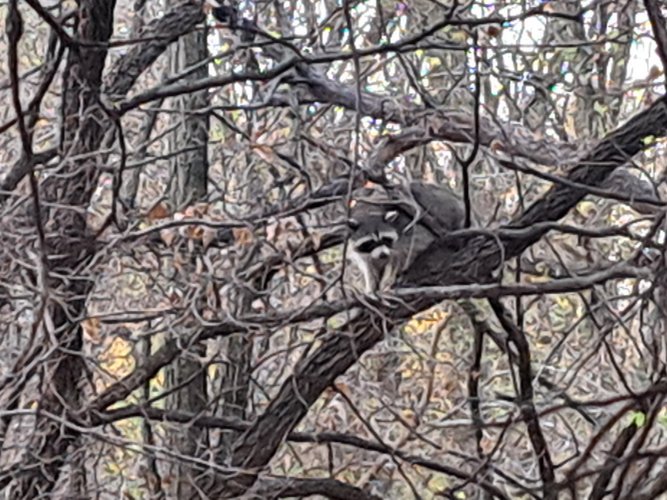 The big wind switch happened around 8am. It was wild, switching from south to north and dropping 10 degrees instantly. I was worried the tent might get ripped up ( it had pulled 4 stakes the night before ) as we only had guylines out the other side, so I ran back the half me to deal with that. My dad had the same concern and showed up a couple minutes later.

The rest of the morning was slow, with the wind blowing out a couple deer I was set up near bedded. 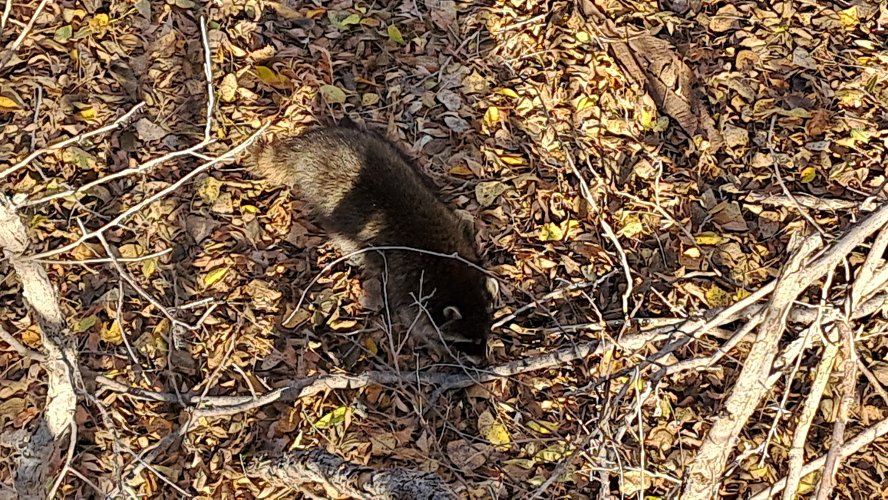 I decided to hunt my stand hoping bucks would be cruising. It was 16 degrees! Heck of a shift from earlier in the week.

Well, sadly, all I saw was a lone doe around 830am which I think had been already bedded about 35 yards in front of me. She came in a bit but I don't know if she winded me ( it was a bit swirly ) or if the drag trail threw her off, but she turned and walked away.

Given the solid north wind by 10am, I decided to move my stand about 30 yards. This would have my scent blow into the dense marsh and allow me shot at more trails as well as a better shot over the main travel spot.

It ended up being irrelevant as the deer hardly moved until dark. I could make out shapes and hear them as light faded. 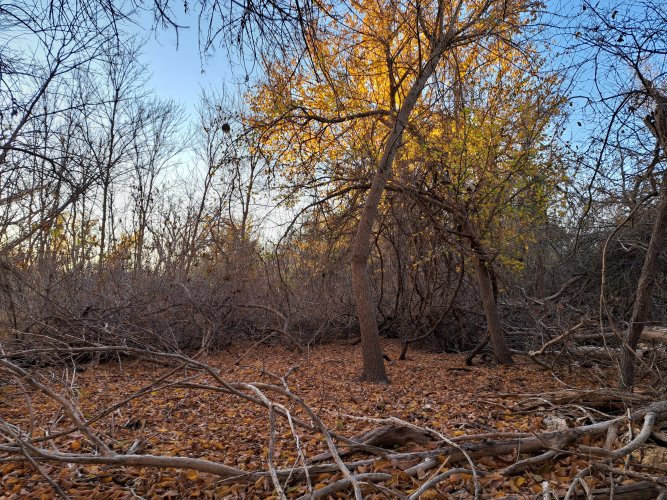 I decided I needed to move as close as I dared to the bedding, but the deer were already there as I came in before shooting light.

Dad had one close encounter each sit these last three, but got busted every time.

We hunted until 10am, then packed up and made the long drive home.
You must log in or register to reply here.