Travel Management, Rogue Motorized Use, and Folks Who Tell On Themselves

Something I have been interested in learning more about, is Travel Management, or the lack thereof, on the Beaverhead-Deerlodge (B-D) National Forest.

Travel Management is an official process stemming from a 2005 Rule that Forests engage in to determine "a transportation system that is environmentally and financially sustainable while meeting public needs. Under the travel management rule, each unit of the National Forest System (NFS) is required to identify the minimum road system (MRS) needed for safe and efficient travel and for administration, utilization, and protection of NFS lands. In determining the MRS, the NFS unit must incorporate a science-based roads analysis at the appropriate scale to identify NFS roads that are no longer needed to meet forest resource management objectives. This collaborative travel planning process must emphasize public involvement and coordination with state, local, and tribal governments."

The majority of the B-D does not have travel management. Due to this, many problems stem. Game Wardens cannot cite folks for driving down closed roads or trails, LEOs and Search and Rescue struggle to effectively function on the landscape, the Forest is ineligible for many grant opportunities dedicated to trail and road improvements, rogue motorized use and the pioneering of trails is rampant and expanding, and user experience suffers as does the resource. There's a long history of the Forest saying it's going to be a priority, and then the can is kicked down the road. I don't know a lot about why, and I should say I am not necessarily calling the Forest out for poor management. Could be a function of priorities changing with every administration, lack of funds, etc.

I made this map to highlight the problem in a chunk of earth I love. I acquired the BLM and USFS system motorized roads/trails datasets. I then skinned dirtbike trails data from the crowdsourced website trailforks.com. You can see those trails in yellow. The yellow lines are unofficial motorized trails either utilized or pioneered by the public - advertised to the public as trails on which to recreate. Trailforks allows users to append beta to the trails they share. One of my favorite nonmotorized hiking trails in the north end of this map, is listed as a double black diamond dirtbike trail, on which a rider can ascend 600 feet, drop 2,000, and cover more than 3 miles in little more than 45 minutes, bisecting an inventoried roadless area.

I am sure other maps in other areas could be made showing similar rogue-use.

I hope that as folks bring things like this to the forefront, the B-D makes travel management a priority or are allowed/encouraged to. As Montana explodes in population as does motorized use, we need to get this under control. It will be an expensive and at times contentious process, but it is the right thing to do. 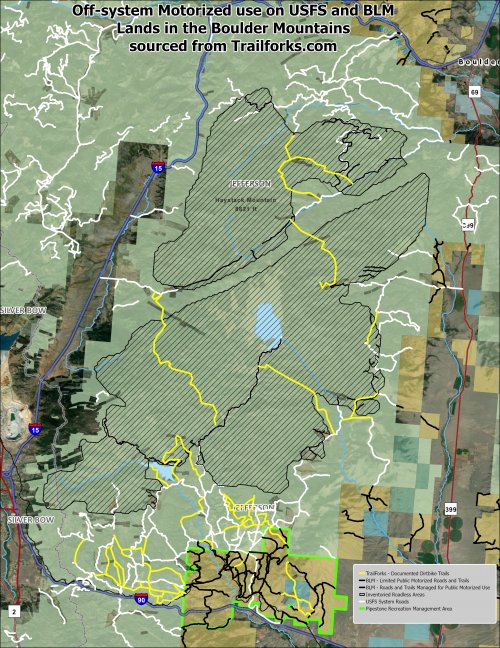 Wow, I wouldn't have guessed that they simply don't have a travel management plan. There are numerous smaller national forests, that serve fewer people, that have completed this process. Though, I will say, our travel management plan update has been placed on hold for several years due to the overly contentious nature of it.

The problem is all the mining claims in that district. A good number, if not the majority, of them are a joke. Just a way for somebody to have a nice camping spot in the summer with road access. Sure, the regs require so many $$$ of "work" be performed every year, but what does that mean. Last I knew (and my familiarity with the federal 1870s mining regs is a bit dated now), the $$ spent in gas driving to the claim from out of state fit the bill for work. Many of these claims are a joke and should be forfeit but of course that would infringe on historic "freedom." So as long as the roads have to be there for the weekend miners and fire prevention (which maybe should not be prevented anyway), then don't expect to see much change. Also, that district is getting clobbered by gypsy moth infestation and thinning is about the only reasonably effective way to combat that problem (and from what I've seen in that disrict, it hasn't helped a whole lot). Thinning requires road access. Yeah, it is roaded all to hell and back, up every ridge and over every saddle, but the problem is more complex than it would seem at first glance. Oh, I forgot about the grazing leases. USFS desperately needs the $$$ and relies heavily on those leases for operating funds. Ranchers need to be able to move cows and fix fences = road access. It's a mess of varied special interests.
S

There needs to be more signage and more enforcement across the West. Not just in B-D, but BLM and State Lands.

Slightly related, anyone else notice pretty much every AWD car/truck commercial shows people driving like maniacs all over "wild-looking" areas. I'm sure the company got approval and permits and such. But it is a tacit approval that it is ok. Every time I see one of these commercials I get more angry.

SAJ-99 said:
There needs to be more signage and more enforcement across the West. Not just in B-D, but BLM and State Lands.

Slightly related, anyone else notice pretty much every AWD car/truck commercial shows people driving like maniacs all over "wild-looking" areas. I'm sure the company got approval and permits and such. But it is a tacit approval that it is ok. Every time I see one of these commercials I get more angry.

Remember the commercials of young couple pushing their old clunker used vehicle over a backcountry cliff so they can buy a new Kia? Yeah, that one went over like a lead balloon with the Sierra Club. It didn't run very long before that footage went in the trash. Almost as dumb as the National Park Service closing off the road to Hurricane Ridge in Olympic Park so Cadillac could film a commercial of their new (1987) sports car racing up and down that very curvy and narrow scenic highway. I never saw the commercial on TV ... or the sports car in showrooms. Anyone trying that stunt on a typical busy summer day is either going to be dead or make someone else dead.

Live in Helena near the BD, and the whole area is a mess. I haven't fully analyzed all the data, but I've got reason to suspect that restricting sales of AT and SxS vehicles to people with a BMI under 30, who can also read at a 12th grade level+ would cause sales to plummet, and would potentially crash the industry.
M

While not solely related to this issue my opinion is that the only way to get a handle on unauthorized off-road travel is to make an example of caught offenders.
Seize their UTV, truck and trailer along with everything inside and auction it for habitat restoration. Then issue a sizable fine.
A

Maybe just me but more government isn't going to help. As is demonstrated by the conversation. This gov agency permit that gov permit.
And figuring out issues without a bunch of bitching. Start listening n get involved. Just don't plan on government to inforce more laws as they have plenty to do. And there is enough laws to cover everything out there.
When you see someone being a jerk go have a little visit. Lots of folks think how n what they are doing is ok. Jerks will move on. There punks.

Akcabin said:
Maybe just me but more government isn't going to help. As is demonstrated by the conversation. This gov agency permit that gov permit.
And figuring out issues without a bunch of bitching. Start listening n get involved. Just don't plan on government to inforce more laws as they have plenty to do. And there is enough laws to cover everything out there.
When you see someone being a jerk go have a little visit. Lots of folks think how n what they are doing is ok. Jerks will move on. There punks.
Click to expand...

All due respect, but I believe this is fundamentally untrue, and it is a mistake to view this through the lens of more government, or less.

FWP LEOs have written letters to the Forest clearly stating that they cannot cite people who drive down "closed" roads, or pioneer trails themselves, because that which is closed, open, official, illegal, has not been declared. That is unacceptable. No amount of policing our own will fix that. We are missing out on tens of thousands of severely needed dollars in Montana's most utilized OHV area - Pipestone. I spoke to a Search and Rescue member on Monday, who told me this map grossly understates the rogue built motorized singletracks that exist in the roadless areas displayed above, and how they have severely struggled to perform rescues in recent years because those riders basically go off trail up chutes and elk paths on the flank of the mountains to a land of nowhere and no trails, and yet, it's not obvious they were breaking any rules. Even the local OHV user groups are advocating for Travel Management, because they know it is out of control and is giving their contingent a bad name.

The Nez Perce singletrack trail, which is the westernmost yellow line, is on the ground a motorized trail, but in the USFS data there is discrepancy. My map isn't perfect or correct, and that is the point. There is no such thing as a correct map here.

I am not an advocate for more government or less as a blanket principle. Imagine if you owned a ranch and you allowed the public on it. One of the most fundamental things one would do is establish where folks are allowed to take their side by sides/trucks/dirtbikes, and where they would not be allowed to. This is a basic and essential axiom of effective and responsible land management, and in the best case scenario it sounds like it is years away. The way use is exploding, more will happen in the next 4 years across the landscape than will have happened in the last 15, and it will be very difficult to control these things once they have spread, like a cancer, across the Mountains of the Boulder Batholith.

In 2001, following the Roadless Rule, the BDNF declared that in terms of priority, the Whitetail-Pipestone the portion of the Forest most in need of Travel Management. I am 37 years old, and I was 16 when that proclamation was made. From 2004-2008, the BDNF initiated travel planning for this chunk of earth, then just steps from completion, abandoned it due to a permanent injunction by a Wyoming US District Judge against the 2001 Roadless Rule.

More than you wanted to know, but Pipestone is the most popular OHV area in a 3 state area, and is referred to as the "Moab of the North". It's insane what is happening there in terms of use, and the way that use is spreading into the Forest is a real shame and a disservice to the land and the public.
Last edited: Mar 2, 2022
You must log in or register to reply here.

It's Public Land. But The Public Can't Reach It.