My Father-in-law is about as North Idaho as it gets. Born and raised in the Silver Valley, he’s spent his life either underground, or in the woods. He’s a certified elk nut, but time has taken its toll and now, at 65 he’s talking more and more about hanging up his spurs.

My wife is an only child, and he and I have always just clicked. I grew up in the Valley as well, we’ve hiked all the same trails, know all the same fishing holes, even to the point of my wife noticing that we tie up a tent the exact same way. Turns out he learned from the dad of the guy I learned from.

This spring I approached him with the idea of putting in on a group application for a rifle cow tag down here, with the expectation of “Cody, with my knees, I can’t pack no elk anymore” we applied. Come along end of June and we got drawn.

I’ve archery hunted the same unit for several years, my hunting partner had a rifle bull tag in the same unit last year, and my Mother-in-law grew up in and still has family in the area. Without being over confident, I’ve got lots of local knowledge, and I’ve got several plans for getting him in position on a cow. I’m not even going to have bullets in my rifle until he’s tagged out.

Our hunt is open from the 15th of October through the 31st, and I’ve got the first week of our season off from work. My FIL is retired so he really doesn’t need to worry about stuff like that. He’s just primed to elk hunt again.

Hopefully, I can do my part to make this last go-round a memorable one.

Hope you'll be putting that supertarp to use! Sounds like a heck of an adventure coming your way.

I am looking forward to hearing how those 199 gr Hammer Hunters work.

I’ve been looking forward to this. Especially the part when you get to dressin’ like a Union Army colonel and start ordering your FIL up the next ridge cuz them cows is jist down yonder. Don’t let us down, Van Buren. 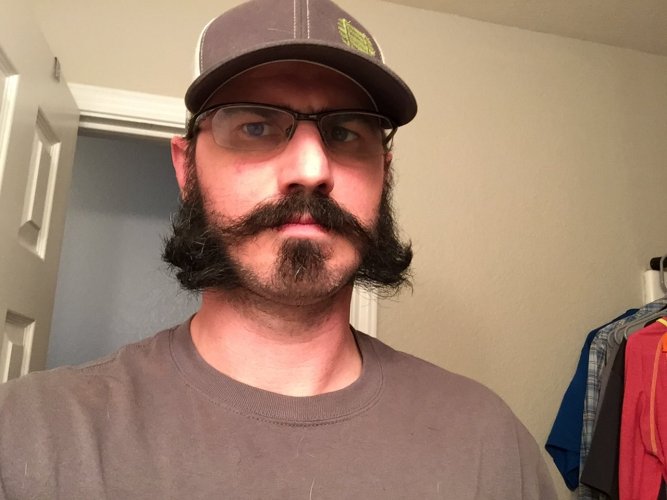 *Yes, I know I’ve got the history and accents all messed up. Work with me, okay? I don’t need the history nerds to come out like the math nerds did in the humor thread.

rtraverdavis said:
I’ve been looking forward to this. Especially the part when you get to dressin’ like a Union Army colonel and start ordering your FIL up the next ridge cuz them cows is jist down yonder. Don’t let us down, Van Buren.


*Yes, I know I’ve got the history and accents all messed up. Work with me, okay? I don’t need the history nerds to come out like the math nerds did in the humor thread.
Click to expand...

I now see I'm going to have to go back and save the picture of you dressed as a 60 year old female elementary teacher on my desktop.

Good stuff! I’d say good luck, but you won’t need it. The cow elk in Idaho are in deep trouble!

Not to derail the thread but my in-laws are somewhat the same, but they are flatland/blind deer hunters in their lower 60’s. My MIL drew the same Nebraska bull tag I did this year and I really wanted to get her on a hood bull. After I made her walk only a couple miles over a few days, she had enough of that. You saw the results, she shot the first bull that gave her a shot against my protests. I’m sure when we get to that age we’ll have different feelings about hiking all over.

@Backofbeyond, I agree with you. Spending those times, helping create those memories with your FIL will be a hunt that both of you remember forever. I am proud of you, and you are being a great son-in-law. Congratulations, excited about the hunt, and look forwarding to hearing the play by play with him.

I can remember my dad's last deer, a buck he shot in 1986 when I was teaching school near Big Timber. It was not an enjoyable thing for him. Now I think I understand. As we get close to the end of our own rope, watching animals meet their end forces us to come to grips with our own mortality. Just another funeral ... but one many in the twilight years decide it's easier to avoid. Heck, I get misty eyed when the leaves change color. Yes, life is about death ... but when that inevitable destination is no longer over the horizon some of us try to slow the pace and close our eyes as much as possible.

It would not surprise me if your father-in-law decides to let you shoot the elk. Or just passes on it altogether. Enjoy time with him making memories. Blood letting doesn't have to be a part of it.

I also taught school at St Maries. I miss that country ... or rather I miss what it was in the 80s.

I spent last weekend making, sealing, and freezing 20 boil-a-bag meals, it’s going to be a truck camp, and I hate getting back late then having to cook.
So other than making more snack bags (I bag up bars, fruit, snacks, etc ahead of time, one bag a day) food is covered.

Talking with my FIL he doesn’t like to pull his camper very far off the paved road, so we’ll both be tent camping at base camp. He snores very loud, so I’ve got several spots picked out where I can get some distance from him.

One concern of mine is there may be the need to take a longer shot. My FIL has only really hunted in the jungles of North Idaho, and I know he’s ever shot anything over 150 yards. I would conservatively guess he’s put 2 boxes of shells through his rifle, even though he’s had it since the .300 RUM was new and killed everything from moose and elk to whitetails with it.

The good news is I’ve got a great load put together pushing, as @BAKPAKR mentioned (also a good North Idaho kid at heart) a 199 gr Hammer Hunter right around 3145 fps. All else fails, I know my rifle is dialed in.

Good luck! Tell that old man to toughen up. Elk hunting is easy compars to his life UG.

You both got this. Looking forward to more!!!

This should be good. Good luck! Looking forward to this one.

Ok, all family obligations are completed. We are T-minus 4 days to elk season 2022, and we've even added some to the hunting party. My mother-in-law is from Weiser, and has lots of family still in that area. Her little brother still ranches there, and the ranch is on cruise control until November when it's time to ship calves. He's decided that spending a week up there will be more fun than spending a week at home, so he's in. Good news is, if we can't find any cows on public land he knows everybody and then some in that area - so the likely hood of being able to get permission to hunt some private has gone way up. And as the guy that will end up packing both elk out, I'm excited by the possibility of a SxS extrication. Call me crazy, but I've never, ever gotten an elk out whole. I've quartered and packed each and every one. Getting one out whole is a bucket list item.

We had a family wedding this weekend, my wife's side, so spent most of the weekend with my in-laws. Saying my FIL is excited is an understatement. He tried to play it cool, but my mother-in-law spilled the beans on him. He loaded everything in his truck two weeks ago, and has emptied and repacked the truck 3 times since. He admitted he'll probably do it twice more before he hits the road Friday morning.

Haha, that's awesome. I'll be curious to hear how it goes. Wish you all the best of luck!

Looking forward to this!

I look forward to those kind of hunts way more than a trophy tag. Keep us posted!

Sounds like a great trip in the making!
Good luck.
You must log in or register to reply here.

Examples of elk absorbing shots and not acting hit?
2 3 4