Quest for a Sask moose day by day

What cartridge and bullet did you use?
S

You need a bigg cart!
S

Well day 2 update a bunch more hunters and they were on their A game. Often moose hunters are slack and it’s pretty easy to beat everyone in before shooting light. Well today we got beat in. As we waited for shooting light we could see one of the guys went north and one south so we went west towards the end of the cut. At the end of the cut we spotted a cow and calf so we snuck in to see if there was a bull with. Well when they ran they spooked three more moose out of a small swamp/bluff. Well they came out and two were bulls for sure but they wouldn’t stop finally they separated enough for a running shot and dad made a hit in the front shoulder. Gave him some time before taking up the trail. A finisher sealed the deal

Very easy retrieval today four hours only and that was going slow and relaxing. Died in a nice spot could get the quad up to him easily.

That’s a wrap for out moose season everyone’s freezer is full now. Now to see if I can find a 160”+ whitetail lol 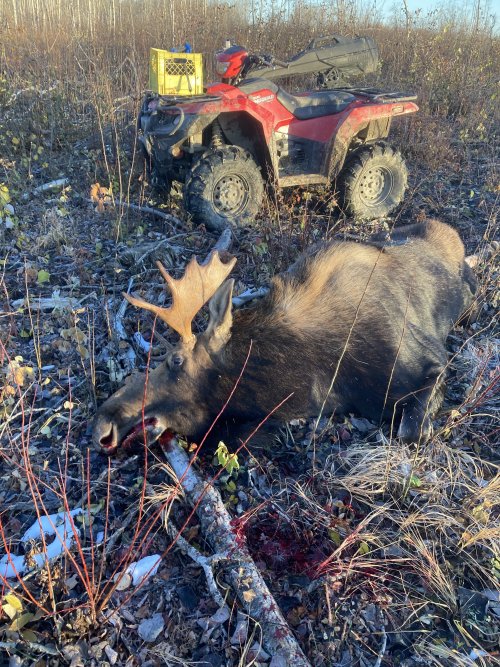 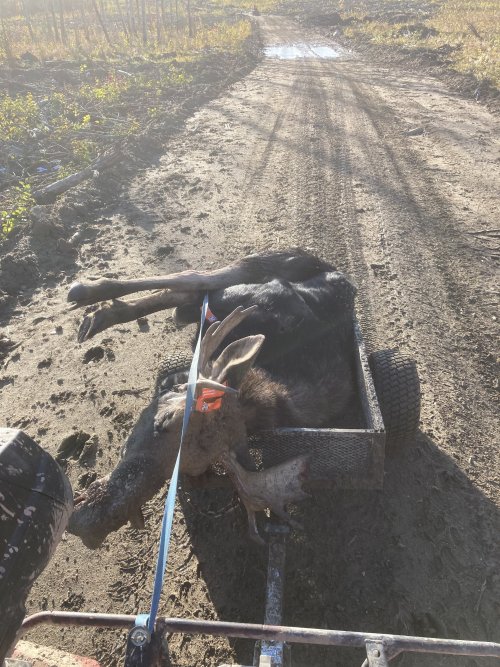 What cartridge and bullet did you use?
Click to expand...

I used a ruger 77 in 338 win mag with 225 Barnes ttsx.I love that gun it’s all I use for my bears moose and elk. I hunt with it So much it feels like an extension of my arm

Talk about getting done, nice.
J

Nice work congrats to both of you.

Sask hunter said:
Would now be a bad time to mention I have shot three moose in the least three years lol
Click to expand...

You are beginning to make me mad now Sask!! Living the moose life for sure.

Nicely done for you and pops. I have spent more time on a rabbit hunt around a snow-covered feed lot than each of you needed to fill a freakin' bull moose tag. I can hardly imagine the 3-day adventure which began with a driving up to a filling station then ended with being able to drive up next to the second downed bull. A few hundred pounds of meat and still have a deer tag in your pocket. Hope you whack a really nice buck.

Saskatchewan… my absolute favorite place on earth !! Congratulations on the two moose hunts. Your are very fortunate to have your Dad as a hunting buddy !
A

Congratulations man ! Nice story too. Real nice to see a family working together like this. When I want to or am able to keep the hide on to keep the meat clean. I cut them in half at the 13th rib.
Do you process your own meat ?
S

Akcabin said:
Congratulations man ! Nice story too. Real nice to see a family working together like this. When I want to or am able to keep the hide on to keep the meat clean. I cut them in half at the 13th rib.
Do you process your own meat ?
Click to expand...

Yes I do my own unless it’s too hot to hang and I have to get it to the cooler. Right now it’s 35F in my garage so perfect hanging weather. When I do my moose or elk I break them into six pieces cause it’s easier to handle and hang by myself. I saw right down the spine to split the animal length wise first then I remove the shoulders, next cut through the spine a couple ribs below the tenderloin and then I’ll have six manageable pieces

So awesome - thanks for sharing!

That trailer is working hard.
Congrats on the bulls. Thanks for sharing.
S

bowhuntmontana said:
That trailer is working hard.
Congrats on the bulls. Thanks for sharing.
Click to expand...

Congratulations thats awesome go get your tag at the gas station then go out and make it happen on a moose!
You must log in or register to reply here.