In this episode, Todd Orr and I are finally able to get our calendars to match. I've known Todd for a while, first seeing him when he was starting his knife making as a true business endeavor. Todd is a serious back country elk hunter, custom knife maker, handgun hunter, and as most of your know, a survivor of a grizzly bear attack, which actually was two grizzly attacks.

Your can listen directly here - https://play.google.com/music/listen#/ps/Ivpd7otkoefup4z5vb3z6ww23em


Todd's experiences make him a very compelling guest. I hope you find it worth the time to listen. Some good advice for those who think that going into grizzly country with a handgun is going to be their best option. I doubt many of the "handgun only" folks have killed 20+ bull elk with a handgun, as Todd has. Todd still advocates bear spray as primary defense and adding a handgun if it makes you more comfortable.

looking forward to listening to this on my way to Rende!

This was a fantastic episode. Good mix of hunting stories and the most bada$$ grizzly story I've ever heard. I also really liked hearing about his elk hunting tactics, and how they are the opposite of yours. It's cool to hear that there is more than one way to get it done.

It was a good listen, I knew about the attack and still wasn’t scared away from the area. I did my research and bought spray then practiced. I was walking the next trail south and had a guides dog come busting out at me from the side of the trail about 10’ away. I had no idea it was there nor could I see past the bend to know I was about to get ran over by a horse train. With that attack fresh in my mind that in counter almost made me poo myself. That was enough for me to know I don’t like traveling solo in that country.

As far as pistol versus spray had that been a griz there was no time to think just reacting. My trekking pole was my weapon of unconscious choice. I give him credit for practicing enough that he was prepared.
Last edited: Apr 9, 2018

This was a food one. I was on a flight from Bozeman to Denver this morning. I didn't realize Todd built knives. I hiked that country he ran into that bear last summer. The thimbleberries were ripe and the huckleberries were getting close. All I could think of was his incident the whole time.

Great podcast! As someone who’s planning his first elk hunt in grizz country this fall, I really appreciate the insights I gained from the interview. I’ll definitely be purchasing some inert spray to practice with.

I reached out to Todd after this podcast and looking at his knife website. I was very impressed with his attention to detail and the quality of his knives. So for Fathers Day this year I placed and order and he did not disappoint. He went to great lengths to ensure that this was the perfect knife for us. My hat is off to you Mr. Orr and we are looking forward to many generations using this piece of art and remembering the people and hunts it will be part of. 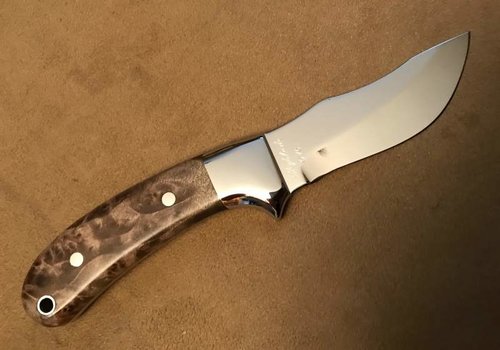 Todd was just on Animal Planet's "I was Prey" the other night.
You must log in or register to reply here.

Podcast Ep 061: Misses, Mistakes, Meatheads, and Mayhem; too much fun