Disclaimer: There will be a severe lack of pictures. I have one picture of a small rainbow I caught on the first cast on my Google backup but then proceeded to donate my phone to the fish gods scrambling to get a picture of Warren's little brown he pulled out of the same hole immediately after. If a lack of pictures is a deal breaker, here's your warning.

This story begins roughly two weeks ago when I found my son and daughter playing lumberjacks with my flyrod cases they had found in the garage as hatchets on the birch tree out front. That night we watched a couple fly videos and he added brown trout to the top of his "yet to catch" fish list above a legal northern pike.

I quickly reached out to a member here who lives up state and he offered up some great advice, and some help on where to go. We ended up fishing the ___ ___ river. (Hint: A man of short stature that is quick to anger has ___ ___ syndrome)

I ordered him a kids combo and we spent the next week or so first practicing roll casting in our pond and then finally over to a sandy beach to give overheading a try. He quickly got a grasp on roll casting, overhead....ehh...it is a work in progress, and a blessing no one was hooked. It had been 10 years since I've had the rods out and it was chasing steelhead in the Joe. It felt nice to knock the rust off. I found the old fly boxes and we played match the hatch at dinner with pictures of bugs on the computer.

Mid-week last week I was able to convince my wife he needed a mental health day, and break from kindergarten. Thursday night after coaching the kids T-ball game, my son and I made the drive up to my MIL's cottage on the Muskegon river north of Big Rapids.

Friday morning we grabbed fresh doughnuts at the chuckwagon in Reed City then ran over to 1884 in Baldwin. $80 and change later Warren is setup with all the hot hot hot Hendrickson's and Sulphurs he could possibly hang up in the brush. A quick shot up the road and we are in the Forest and ready to go.

Right away I was blown away by the depth of some of the holes in there and the structure in the first stretch. We were in and out of the water a bunch when it would be too sketchy to carry him through waist deep water but plenty of shallow gravel for him to fish from. The river where we were fishing averaged probably 10ft wide.

We found a nice gravel bar pretty quick with a nice hole on the backside with fish surfacing at 8:45. First cast I nail a nice little 'bow on a sulphur. His first cast is a mess, second cast was perfect and laid out on the front edge of the hole. Before I could give him the chef's kiss...Sluurrrpp. He's trying to reel up the mess of line in his feet and jumping up and down in the water. He gets himself together and into the net a nice 8" brown. Drown my phone in the proceeding goat rodeo of a netting, unhooking and keeping the kid above water. Let mom know what's up with the Inreach and we get right back after it.

Around 11, Warren wanted some ramen in the jetboil so I got him setup with a shore snack of sodium noodles and switched out the sulphur for a Hendrickson on my rod. Directly down stream of us there was a huge overhanging tree with a DEEP black hole directly underneath. First cast wasn't great but I rode it out with nothing and repositioned for a better approach. Second cast gets hammered almost immediately. This huge brown is all the way out of the water. I am kind of dumbfounded by everything that just happened and trying to keep it together. I was trying to hold him in the hole that's about 50sqft and out of the deadfall in the back edge. Goes airborne a couple more times. Warren is shrieking at this point. Fish comes blasting upstream by me, it's only 8ft wide here. I try to slow it down by clamping against the cork because I stupidly never put it on the reel and that's all she wrote. Broken off tippet drifting through the air. Bad habits die hard, even after 10 years. I go sit next to Warren and shakily drink some water and struggle to open my poptart. Couple minutes go by of quiet snacking and then he casually drops, "Dad you owe me a Mr. Hendrickson's fly."

After lunch we hiked out and ran over to another section downstream that I had read had better wading water for kids. There was one hole downstream of the parking circle about 100 yards with a huge gravel bar we sat and played in for about an hour and half with never more than 4-5 casts without a fish. It was wild. They were all 6" or so but that doesn't matter to a 5 year old. He was getting kind of wore out by this point and was rockhounding and running the net for me. At 3:00 with 4pm thunderstorms forecasted we took a quick look around for some morels on the way back and packed 'er in.

Together we ended up somewhere around 30 fish. It seemed like every hole over waist deep in the center current held fish in both spots and they were hungry.

Some take-a-ways: I let him fish the center holes and I took the outside edges and deadfall. I really struggled to pull fish out of the deadfall. If they were in the wood I rarely connected even though we could see them surfacing. My line mending was probably the culprit and definitely needs some work. Those small tight fast holes with deadfall structure definitely brought out the rusty flaws. Nymphing both sections would be all but impossible. The wood is everywhere and snaggletoothed. We didn't even attempt it.

I honestly couldn't have asked for a better day. He casted, hooked, and released 10 fish on his first trip. 5 browns, 3 rainbows, and 2 little chinook. I lost count of the fish that missed the fly and went airborne or flashed at the fly. He only lost one tippet to a gnarly knot and 1 fly in some wood that I wasn't comfortable crossing over to free. I had a smile the whole drive home while he was snoring in the backseat after devouring a happy meal.

It was tight, but not overwhelming, quaint and peaceful. We had both places to ourselves. Currently in the process of planning a overnight float trip in a raft with my brother towards the end of next month on the P.M. to see if we can get him on some bigger trout during the hex hatch.

I'm hoping to head out next week and see if I can follow suit.

I think I'm more jealous of your experience with your son than the fishing.
G 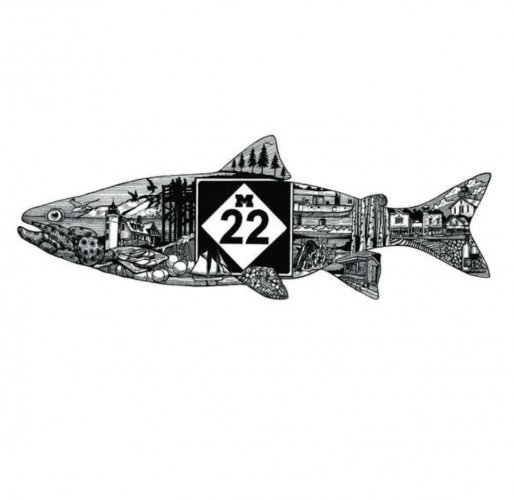 I just followed a truck with this M22 bumper sticker and was thinking of that area of the state! It sounds like you had a good trip!
B

I'm hoping to head out next week and see if I can follow suit.

I think I'm more jealous of your experience with your son than the fishing.
Click to expand...

It's all he talked about all weekend! Thanks for the help! Good luck next week if you make it out.

The itch is back, trying to sneak back up with my brother for a day on the Pere with a canoe for some nymph practice before taking him overnight next month.

Little man just found out how to drain a bank account! Lol.

Enjoy the ride buddy. Next time don't dunk the phone! Let's try to find a time to meet up on the big or little and see what we can do to help feed his addiction.
B

Enjoy the ride buddy. Next time don't dunk the phone! Let's try to find a time to meet up on the big or little and see what we can do to help feed his addiction.
Click to expand...

Yes he did. I upgraded to a dunkable phone, for next time, even though it was a enjoyable feeling not being compelled to take a million pictures and just be present.

Sounds good to me!
G

Excellent writeup! While I never got into fly fishing, I do miss the rivers when I lived on the west side of the state. Even though I pulled over 100 walleye out of the Saginaw and the bay this winter, I sure do miss the handful of 6" trout I've pulled from the Manistee and others. Nicely done getting the youngster hooked!

I’ve spent a lot of time in the Baldwin area over the last 40+ years. Never fished though. We hunted and camped the Manistee forest all the time. i don’t hunt it anymore more but still spend time up there camping. We also do canoe trips there in Baldwin. They are a lot of fun if you ever get the chance to do it.
S

Thanks for the trip down memory lane!! Now imagine getting a 15# king to hand on July 4th in that water just a bit downstream. Hard to believe that was nearly 20 years ago, but I remember that moment like it was yesterday.

Early hexes can be fun, but he might get more out of a good brown drake hatch on the big river or even gray drakes on the MO at Pine St. Tons of fish and the benefit of some daylight to see what's happening.
You must log in or register to reply here.

Kid is keeping me busy...