Debating on whether to pick up an A tag for the Panhandle or Palouse Elk zones. Have done some scouting in both areas but with tags going on sale shortly I am not yet certain which would provide the better experience.

The Panhandle units I would likely hunt would be 4, 5, 6 and seem to offer a bit of a backcountry experience that I prefer. The Palouse zone and specifically 8A, is full of roads and the terrain is not as scenic in my opinion as the Panhandle. (I value the views more than I probably should during hunting season)

I have found elk in both units but being new to the area I have not had enough time to decipher which zone holds more Elk. IDFG objectives can be misleading and not exactly a good insight on current heard conditions and I have not found a recent report on either zones Elk populations.

These are not capped elk tags so I am unaware of hunting pressure in each of these zones but I am sure a little of bit hiking should take care of any problems in regards to crowding.

For those of you with experience in these areas, which tag are you buying to give yourself a shot at a bull? Panhandle A? Palouse A? Would you rather hunt the Southern part of the Panhandle zone or the 8A section of the Palouse zone?

Back when I was a youngster in Moscow, I shot this bull in Palouse 8A.
Like you say, lots of roads. My strategy was a predawn hike 3 miles to the
top of a drainage above a bunch of gated roads.
If you hunt this unit, try to find areas that 4-wheelers can not access easily.
I did the same spring turkey hunting with great success. 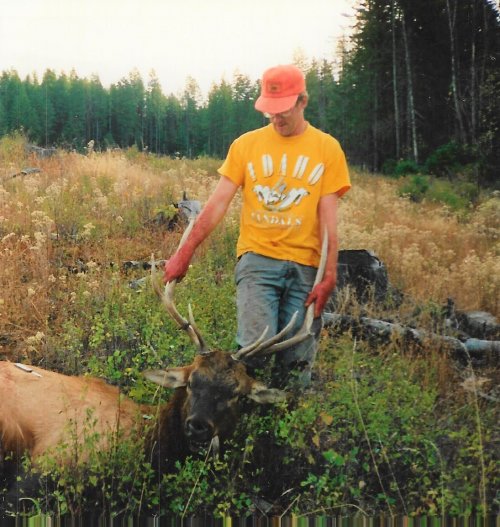 How many days off do you have to hunt? Long weekends or a full week? If I lived in Moscow I would probably hunt the Palouse elk zone due to ability to scout and day hunts or short weekends. Pretty sure elk densities are higher there but so are hunter densities. Palouse elk densities are definitely higher than the back country areas of 4 and 6.

I live in the Panhandle elk zone and can day hunt <30 mins from home or be in more remote areas in about 2 hr drive. So I buy a panhandle tag.

I voted Panhandle! But I'm selfish. I hunt Palouse A. Over the years I've hunted a lot in the Panhandle as well.

Watch out for GMU 5. The CDA Tribe requires a permit to hunt and fish their lands and it is not cheap. Units 7 & 9 used to be really hot, but after the 1996/1997 winter the herd has suffered. Not to say there are not good bulls in there.

In the Palouse Zone, I recommend killing the first legal elk you can. Especially this first year. It is not managed for age class, but to balance objectives with Ag interests. I have seen 360 bulls close to wheat fields, but there are sure none on my wall. To put it in perspective, I've seen 2 300+ bulls in the Palouse in 30 years here.

Never let down your hunt awareness. Two years ago I chased a bugling bull deep in a ravine and blew him out. On the way back to the truck I walked in to 4 cows on a USFS ATV trail. I was absolutely flat footed and could not get an arrow on string.

In the Palouse A, if they are not bugling in your Plan A spot, be ready to move. You can get in to good bulls. I might be on Moscow Mountain one day, Harvard one day, Bovill the next, then Cloverleaf the next.

I have buddies that have winched them into their truck, but I always seem to find them in some dark tangled hell hole.

Remember that with all the roads, the road you came in on may not be the shortest pack out. Study the roads to know if there is now one closer to your kill. Easier now with phone apps. Back in the day it was paper and in your head. My first year on the Palouse I killed a bull and packed my quarters about two miles back to my truck. I realized later I was about 800 yards from a road.

I prefer the August greenfield hunt part and the late Muzzy part of the tag. My shoulder had me out of archery last year, but I'm good-to-go for this year.

It takes real discipline to hunt from home and drive out each day. It is just too easy to get distracted and get to the trailhead late. My wife hates the quote, but Randy quotes a legendary old timer from Bozeman who said, " No man ever shot an elk after waking up next to his wife in the morning." So something close to that anyway.

Remember that the long days of getting out after work don't last. When the clocks "fall back", if you are working until 4:30 or 5:00PM you are out of light by the time you gear up and drive to the trailhead. I've learned that getting out an elk in the evening and getting back to work is for the young bucks. I won't play that game any more. If I go out in the evening it is to scout unless an elk is begging to be loaded in the truck.

Know the land ownership and the access process. PM me if you need help with that.
You must log in or register to reply here.