I drew a coveted Osceola permit last year with plans to allow my wife to hunt it as my guest (Florida's version of party hunting). We made all the plans and arrangements for a week long camping trip with the kids that would allow her to focus on taking her first Osceola and everyone to spend quality time in the outdoors together. Unfortunately, both kids got sick at the last minute and momma wasn't interested in traveling solo for the South Florida hunt. As much as I wanted her to go on her own, since she is more than capable, sharks, snakes and the boogie man are always on the top of mind. Though, I'm sure a mother's natural instinct to protect her offspring had something to do with the decision as well.

So, riding solo, I made the long drive down the afternoon before opener. Though I would have liked to arrive sooner, work just wouldn't allow for it. Although, since I had a week to get it done, there really wasn't much concern for pre-scouting.

I arrived late in the evening and set up my camp. Beautiful little spot right on a river. Got everything situated and hit the sack early feeling about no pressure at all. Something rare in my life that I try to embrace any time the opportunity allows.

Early the next morning I made my way to the check station, where I'd get my "spot" for the hunt. On this particular hunt, being that it's a high quality opportunity, each hunter gets a chunk of acreage all to themselves. It's a FCFS deal and since I was the last to arrive (everyone else got down early), I got the last choice. To my own surprise, that didn't bother me one bit as I quickly accustomed to my new laisse fare attitude.

Used OnX to identify a "turkey looking" area and headed in about a mile to it. Set up with a stiff breeze coming out of the east that made it tough to hear. Even so, the crows and woodpeckers sound checked me often enough to give confidence in hearing a gobble. By the time 7:30 rolled around, and I hadn't heard a gobble, I decided it was time to do some running and gunning to learn the place a little better. I carefully gathered up my gear and slowly stalked back out the way I came towards a large opening. When I turned the corner, though still low light due to overcast conditions, I spotted a black blob 400 yards or so off in the distance. Subsequent check with my binos identified not one, but two, black blobs over yonder.

Hit the deck and started a slow crawl that would bring me to within 250 yards, and a blind corner for the birds, that gave me a strategic advantage. I was able to calmly get my situation together and placed a strutter decoy on the visual side of the corner for the birds. Slipped back 7 yards from my decoy and was able to peer over the cow grass just enough to make visual contact, but not so much that the turkeys could see me. A perfect ambush point.

I hit my pot call twice and was immediately answered by triple gobbles from both birds who then turned my direction. Cut hard a few times, which they continued to gobble at, then shut it down completely. They were coming and I knew there was no need to make another sound. Both gobblers covered the 250 yards in less than 2 minutes, almost tripping over one another as they vied for the first opportunity to meet my hen impersonation. They'd only stop to briefly strut and gobble, before picking up the jog to be first in line. As the birds approached, I was prepared to shoot the first one that presented a shot. As the first turkey approached, I quickly looked at his beard and was ready to shoot when the second gobbler cut in front of him and conveniently had a longer beard.

Squeezed the trigger with him basically in my lap and ol' boy hit the deck like a sack of potatoes. Didn't even flop. His buddy couldn't quite figure out what had just happened, but wasn't convinced the hen he heard wasn't real. My tag was only good for one gobbler, so I sat there and teased him a little bit before he eventually wandered off.

Here was my setup, though you can't see the blind corner they came from to the left. When they turned that corner, I was there waiting:

I'm not really a site-seer when it comes to activities. With my hunt now over in South Florida, I decided to pack up camp and turn and burn home to try and get after em' in my home woods. Stay tuned....

Beautiful bird and exciting hunt. Thanks for sharing.

Awesome bird. I followed you. I know your neck of the woods... we ain't too far apart

Beautiful Gobbler! Way to get it done quick.

It never ceases to amaze how turkeys can handle such varied habitats.

I recognize that camp spot. Your secret is safe with me. I have been applying for that hunt for years. I hope to draw it one day. Feel like it's like drawing a sheep tag. 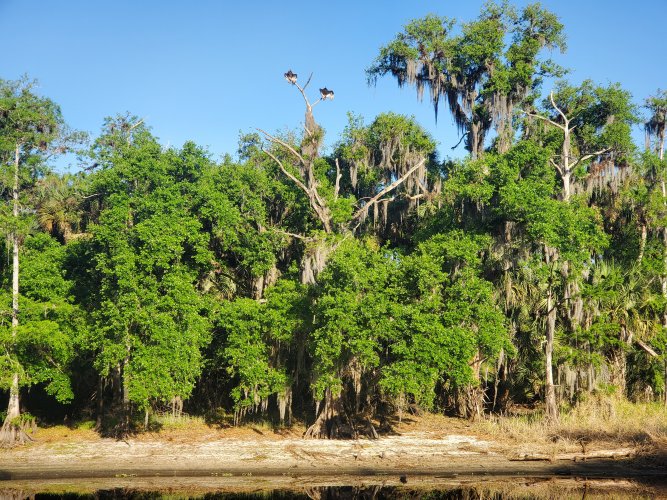 Congrats on the success!

S
Dedicated to my nephew
2 3