All that scouting and obsessing over elk all summer paid off with me being able to tip over this OTC public land bull a little over an hour into opening morning.

On the walk in heard a bugle then a second shortly after and I moved towards it. Then heard one about 45 minutes later that I kinda thought was a hunter. In the mean time I was still hunting and soft calling as I worked through the timber. Windy morning made it perfect for that. Shortly after that he bugled and was closer and growly so I knew he was an elk for sure. He was kinda headed my way and I headed his way. Eventually caught glimpse of him but couldn’t tell for sure he was the bull as I also heard a cow in front of him he was pushing. He moved past so I quickly paralleled him and once moving up and in front of him a bit I cow called and bugled and you could see him through the timber as he turned on a dime and ran into 20 yards. Stopped frontal and I was sitting down and solid and hammered him right square in the chest with the 338 win mag. Second shot hit a tree but third shot piled him up as he was running no more then 15 yards from the first hit.

I’m on cloud nine as I happily shoot the first legal elk I see which usually is spikes. Never imagined I would be done so quick and to have a bull bugling. They are usually pretty quiet as there is lots of pressure in the area 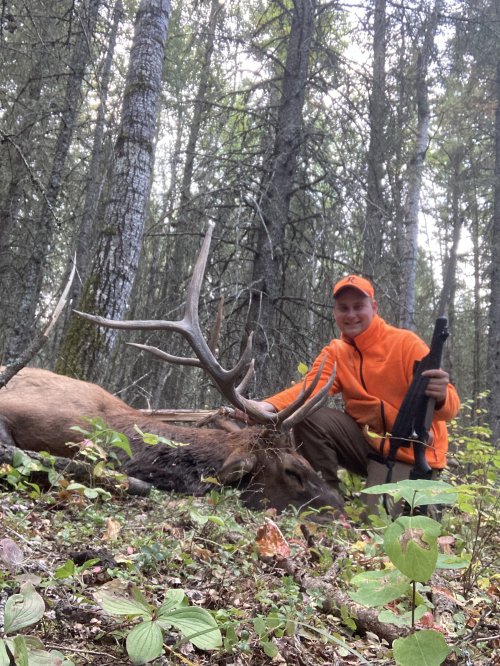 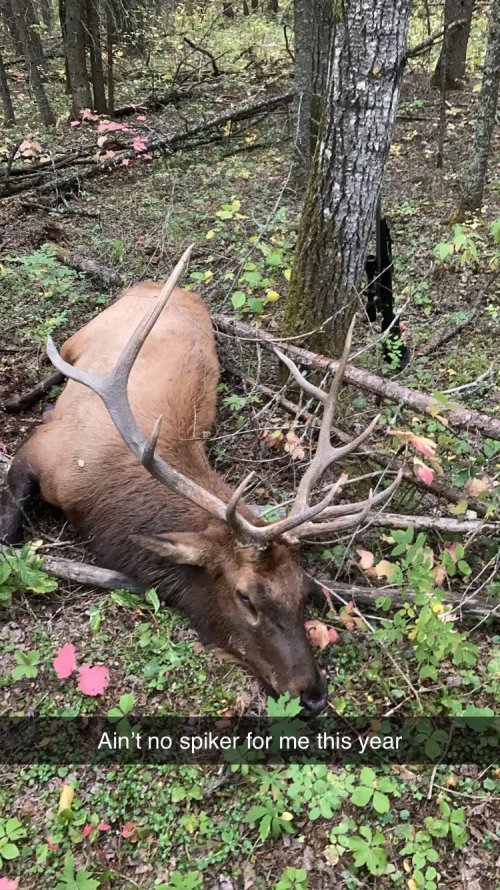 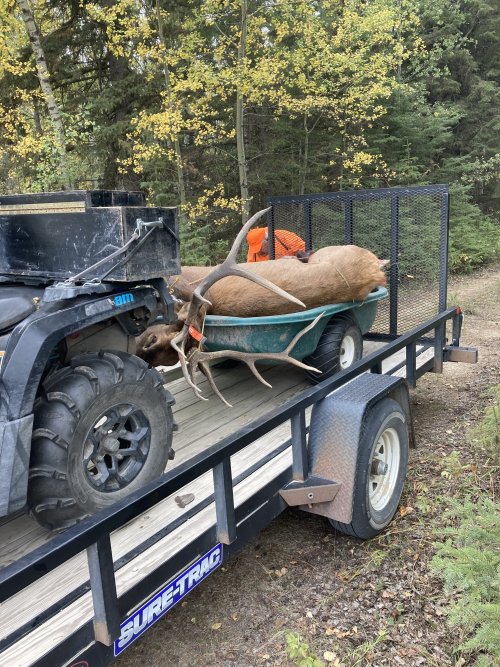 Best part is getting your bike to him. Congrats.
F

Congrats on a nice OTC elk!!

Congrats! Gotta love getting one out whole.

opening day, out whole and your first.

Nice bull, and I’m also very jealous that you got him out whole.

Nice bull! Ditto on the whole retrieve, so nice to be able to handle an animal that way

Awesome! Cant beat being close to a road.
M

Nice Bull, way to start the season off!
P

Nice congratulations to you!

Totally expected you to have a big old beard, red flannel, and a cowboy hat

Nice bull, that has to feel good

Congrats on a beautiful bull. Congrats on a fine Remington hat also.
being a big Remington fan all my life l have the same hat . Retired it a few years ago.
G

Bigjay73 said:
Totally expected you to have a big old beard, red flannel, and a cowboy hat
Click to expand...

I expected to see a Canadian tuxedo.

Another elk out whole. I gotta start hunting different country!

Congrats on your opening day success. Very nice bull that should eat good but possibly not as well as a spiker.

Corn king 60 said:
Congrats on a beautiful bull. Congrats on a fine Remington hat also.
being a big Remington fan all my life l have the same hat . Retired it a few years ago.
Click to expand...

I’m a Remington fan too although my 338 is actually a ruger 77. My dad had a Remington 700 on 338 I would love to have some day
You must log in or register to reply here.