This may get long, so bear with me.

Very few people know that Nebraska has a lot of elk and quality elk. It is resident only and mostly private land. Bull tags are not easy to draw and for most are once-in-a-lifetime. I, personally, never put in for bull tags, as I don't care about antlers, but lots of people do.

I know a number of ranchers/farmers south of me that put in for land-owner tags. One specific landowner whose family now owns/manages a substantial amount of farm/canyon/ranch land is 90 years old and actually got the first tag ever issued to land owners in the area. He did not fill the cow tag and has since drawn another that he did not fill. Elk are elk and if you are not physically capable of doing the hunt, then it is tough.

This year, he drew a land owner bull tag. My wife works in the doctor's office where he is a patient. The man is on oxygen and getting pretty frail.

I told his sons/grandsons that they had better bust their ass to get grandpa an elk. I was so happy that he had another chance, as it is definitely his last. My wife showed me a pic this afternoon of him with a very nice bull. I damn near fell apart!

This was an effort of lots of local people to get him a bull elk. This is one of the greatest hunting successes that I have ever known of.

The bull was spotted at a distance and called in to 30-ish yards. Old Ivan was positioned right in front of a pickup sitting on the ground. The bull was killed with a Browning BLR 30-06 and open sights..

He took out his oxygen tubes to get pics with the bull. I will post the pic, if I can get a good pic to post.

This is just, plain, what hunting is all about!
M

Please do post pics if/when you get a chance - no better hunting stories than the one you just shared. 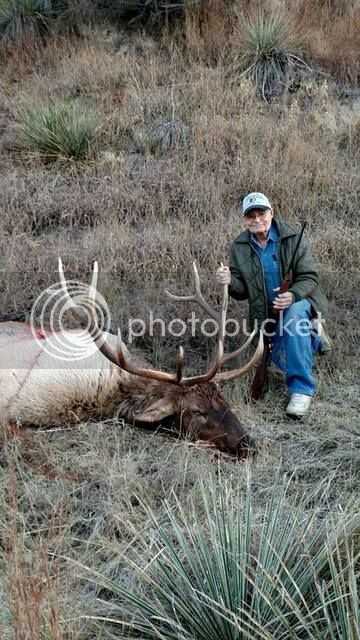 Ivan and his elk.

He shoots He scores!!!
S

He took out his oxygen tubes, so that he could get his picture taken.

Awesome! What a great story.

That is an awesome story. Well done.

That's great. Congrats to him on a very deserved bull.

There is nothing like a feel good story! Congrats to Ivan and all that helped make it possible.

What a bull...congrats to the gentleman.

Great story and a great bull too, for Nebraska or anywhere. Thanks for sharing.

Outstanding! Doesn't get much better than that.

That's awesome the way it should be

Mr. Hooper... It's good to hear names that I know. I live in Montana now but I grew up in North Platte and went to school in Maxwell with Mark and Ryan. You're right, there are some great bulls in the canyons. It is nice to see Ivan shoot one. Goodluck this hunting season.

Landon
You must log in or register to reply here.