I was quick enough to pick up a returned first season tag in Colorado this year after burning my points last year on a different first season tag. The elk were still bugling last year, so I was excited for this hunt again. I had never been to this unit, but it looked fairly good on the map.

After a quick 1200 miles, I was glassing a hillside by Thursday evening. I didn’t see any elk, but I figured the morning would be better. Same result as the previous evening. Nothing but cattle and other hunters. No bugles either. I tried another spot in the afternoon, and it looked much better online. I drive over to spot C and arrive right at dark. I camp there with a plan to glass the canyon on opening morning.

A quick hike to the canyon’s edge in the morning reveals a less then optimal glassing point. I figure I will hike along the edge to find a better spot. As I am walking along, I bump into some grazing cattle and go around them. The cattle make their opinion of me known and move along. As they move off, a movement catches my eye. I pull up my binos to get a better look through the trees and it’s a branch antlered bull! I slowly lower the binos and look around. I am standing in a little clearing with no cover. I crouch down and attempt to remove my rifle from the gun bearer. I don’t want to undo the velcro strap because I know the bull is close and would hear that awful noise. I curse myself for grabbing the 27.5” bull barrel rifle instead of the Kimber hunter that morning as I back the barrel through the loop. I get the rifle free and remove my pack. I look back up at the bull and he had turned into a spike! The bull had fed behind a tree and a spike revealed himself. I creep up to a small tree to get some sort of cover. The spike and bull continue to feed out into the open and closer to me. The spike feeds towards me head on and turns broad side to feed. I hoped the bull does the same. He does. As the bull is broadside, I shot him in the lungs. He just stands there along with the spike. I quickly try to reload and the bullet jams. I drop the magazine and reinsert the bullet. The spike sees the movement and runs off. As I pull the rifle back up to the bull, he is now facing me. I know this isn’t the most ideal shot, but there is already a bullet in him. I touch the trigger once more and he whirls around and crashes right there.

I look at my watch, 7:42 opening morning and I was done. I walked back to my pack and grabbed the range finder and took a reading. 48-yard shot. Closest shot I have ever taken. As I start to break down the bull, I check the distance to the truck. 501 yards. Much easier than last year’s 3.5-mile pack out. Full bone on pack out with this bull. I loaded up the bull in the coolers, changed clothes and was back on the road that afternoon. Bittersweet my elk hunt ended so quickly but I would have shot him on the last day, so I took him on the first! 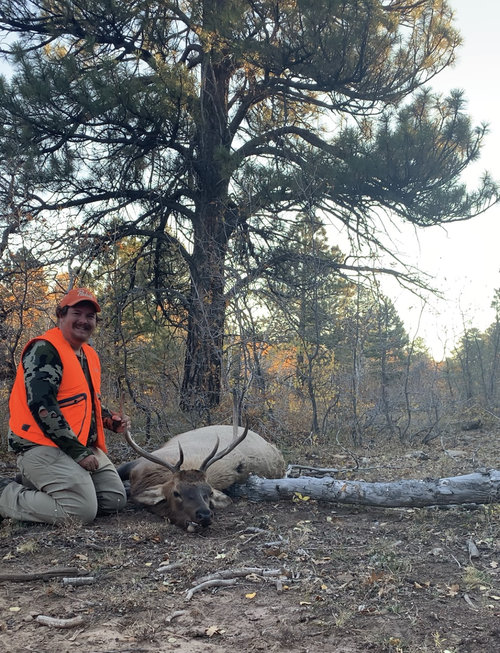 Very nice! Grats!
A sense of relief when every aspect lines up as ideal as possible.

Always sweeter when you had to work hard for one in the past, also makes you all the more thankful for a short pack out!

Congrats! The hunt is about the experience, and this seems like a great experience

I've had those kind of hunts with whitetail but not elk. Congrats!

Thanks for the write up! I will take lucky any day. Congrats on filling your tag and once again, a great lesson showing the importance in having a handful of options in your pocket.

Congrats! Gotta take it how you can get it sometimes! I'm always reluctant to end a hunt too quickly, but a bird in the hand...

Always exciting seeing elk that close! Even better when you have a tag in your pocket. Congratulations!

Congratulations, way to get it done!
O

Awesome, congrats. Also goes to show that there is often a chance of elk to be found where others skip over and rush past in order to get to 'elk country'.

Awesome job! Way to get it done!
You must log in or register to reply here.