I remember there was a "Back in The Day" picture thread, but I could not find it.

Anyway,
I had no idea this picture existed. I found it in a box of pics my mother sent home with me. The first buck I ever shot (at). That is me in the red shirt on the left with my dad behind me. My buddy Barry on the right with his dad behind him. c.1972?

Statute of limitations on arming 10 year olds in California is expired and John has left this earth. That's his tag on the buck. Because he killed it.

I had buck fever bad and emptied all seven out my 30-30 without touching this buck once. Then I started chasing the deer down the canyon on foot. After the smoke cleared, Barry's dad dumped it with one shot from his Model 99 in 300 Savage when it stopped for that fatal over-the-shoulder look.

He then coached me that the thing to do is go to high ground so you can see to get your shot when it comes. I took a lot of ribbing that day. A great time to be a free range kid.
I grew up and bought fancier rifles, it was 30 years later before I put my own notch on that rifle stock. 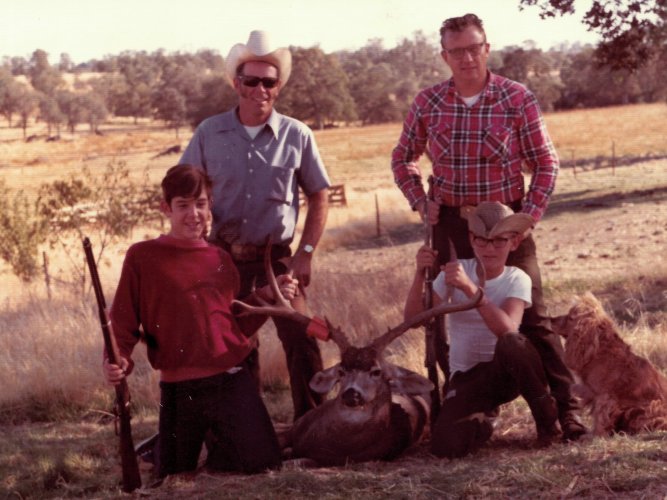 Thats an incredible picture. I love everything about it.

Heck yes!! Wide for sure!
M

Nice buck.
Great sideburns on your Dad.
Your buddy completes the picture with hat and glasses.
Partial points for the red shirt.
A+ for show and tell.
E

Fine photo and worth sharing. Now California will contact you for the lead cleanup in that valley.

That is the most 70's photo I've seen all day

Really cool! Is the rack still floating around at someone’s house?

GoGriz1234 said:
Really cool! Is the rack still floating around at someone’s house?
Click to expand...

I don't know. John died a few years ago. Barry might still have it. We really weren't antler driven. I remember my dad chucking some nice antlers in granite rock piles.
I know there is a house almost right on top of where this buck died.
You must log in or register to reply here.

J
The nature of antlers
2

Muzzleloaders (how they ruined my life and will yours’)
2 3

Favorite rifles in safe and why
2 3