Started out a little slow with first few flocks going to a field just across the road. Made me think oh boy this could be bad. Finally a flock came into the decoys they didn’t work perfect but they were pretty good and knocked down 2/3. Next flock came in pretty good as well but started to veer off around the 30 yard mark. Well this flock was packed in tight together. So I picked a bird right in the middle and bam that shot knocked down three and my next shot knocked down one. After that I’m like holy I’m close to a limit now. Next flock just passed by about 50 yards out and I took one shot and knocked one down. For the last bird had a pair come in perfect and dumped one hovering right in the decoys. Never had a morning before where I limited out on geese in less shells then geese.
After limiting out went and grabbed the truck and then the flood gates opened geese everywhere you looked almost. I even had geese landing in the decoys with my truck and trailer parked in the spread it was insane!! Was a morning when wish we had higher limits or some of my friends would have came along instead of baling. 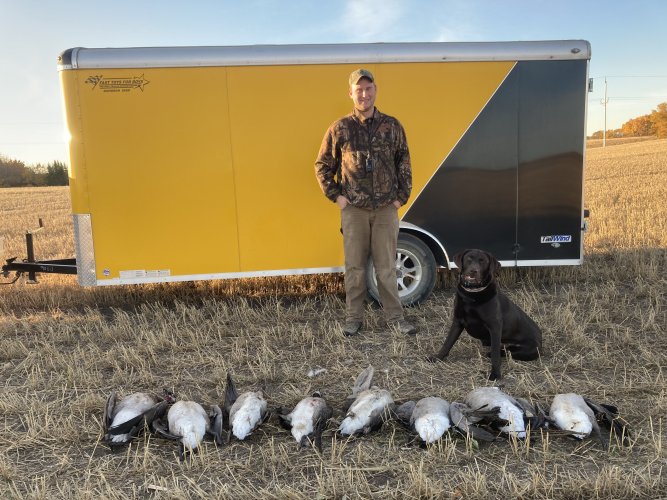 Thats awesome! How are the ducks looking up there?
S

mdeerjunkie said:
Thats awesome! How are the ducks looking up there?
Click to expand...

Few around and starting to get coloured up. Shot a young speck yesterday that was pluckable. No pin feathers but a little lean. We don’t get many ducks in this area until real late in October. Most ducks jump over us for some reason

Nice, always seems that the big groups of birds dump right in when your by yourself. Limit for geese was two a couple years ago. Its three now. I hunted an afternoon field set up my spread shot my two geese in literally 5 minutes and had big groups setting down in the decoys with the truck and trailer pulled up to the spread picking up. F'ing seriously?
F

Atlantic Flyway Canada Goose limit is one bird per day with a short 30 day season. I got out a couple times during the early "resident bird" season when the limit is 8 per day Sept. 1-25 and had great hunts.. My gear is stacked away until I head for Saskatchewan next September.

Sask hunter said:
Was a morning when wish we had higher limits or some of my friends would have came along instead of baling.
Click to expand...

Awesome hunt! On a good morning I always enjoyed laying in the decoys after the hunt and watching. We are only allowed two dark geese. I could invite myself if you needed me to!

You have a smile though the dentistry smile award goes to your brute of a choc!

Grats! Sounds as though geese considered your truck and trailer the bullseye landing spot!

You have inspired me to spruce up the decoys and get out there. I'm still in the middle of the trophy room annex construction and must get that out of the way first. Several years ago I had a morning like that. A limit of five honkers in five shots before the big flocks came. That's not terribly unusual but this time one of the downed birds got back up and flew off and I still went home with a limit. That morning was memorable for a couple of reasons. The first flock to come in gave my deeks a pass and landed at the far end of the field. Not good! Live geese in the field pretty much wrecks the hunting. Fortunately, my Lab Opal "somehow" slipped away (oh darn!) and flushed them up. She came running back ... and the geese followed her! Darndest thing I've ever seen. I dropped four in three shots but one flew off when she went for it. The other three were only crippled. When Opal grabbed one, the others would take off running. Man, she WAS NOT letting another one get away! Eventually she had them all herded together in one spot, very much like a sheep dog working it's flock. More geese were coming and I was hollering at her to forget it and come back into cover. I'll never forget the look on her face. "Gawdamit, get out here and give me a hand." I set down my gun and ran seventy yards through the corn stubble, grabbed a couple and she latched onto the third. We ran back to the brush just as the next group set up to land. Loaded my gun quickly and took a double. That was my limit. Both crumpled dead. I turned around and the first three were gone! They sneaked off into the thick brush behind us. And my French Brittany was back in there with them. I didn't call for her because she won't retreive geese ... but she will find them. Opal and I found her pointing a honker and as soon as it was in hand she darted off to locate another. I wrung it's neck, stashed it at the edge of the field, and we went looking for Puppy again. Ditto for goose number two. The third runner was two hundred yards back in that jungle ... with Puppy staring it down eye to eye. As I pulled up the decoys geese were raining down on us. The field was full of them by the time we got back to the Jimmy.

Thanks for bringing back a great memory.
You must log in or register to reply here.

Oh, what a beautiful mornin'