JLS said:
Look at the structure Idaho uses for A and B tags.
Click to expand...

MTTW said:
Revenue, that is what they have to lose. That and the fact that it would wake people up to the utter failure of mule deer management in SW Mt.
I could mention another 1/2 dozen units that closing the season would have a very minimal effect on Mule deer numbers, but FWP knows that.

The big problem that I see, is that fixing the Mule deer problem in SW Mt would take the opposite of what the majority of the outspoken members on this site are lobbying for.
It would take less elk on the land, not more. And it would take active predator management. The predator management that I am talking about will not be addressed by relaxing restrictions on taking wolves. Killing more wolves will very possibly make it worse for Mule deer.

The spread of conifers: Douglas fir, Rocky Mountain juniper, and other conifers have spread across mountainsides and foothills. ﬔe conifers outcompete the forbs, shrubs (such as mountain mahogany, antelope bitterbrush, and sagebrush), and young quaking aspen that mule deer eat. ﬔis “conifer expansion” has been caused by decades of fire suppression and reduced tree cutting on federal, state, and private lands. 2. Competition from elk and whitetails: Elk and mule deer share much of the same habitat. ﬔough their diets don’t overlap completely, an elk eats three times more than a mule deer and is better able to reach browse in deep snow. In much of Montana’s prime mule deer country, elk numbers are now three or four times greater than they were in the 1980s, and they have taken over areas previously dominated by mule deer. For instance, in several hunting districts in south western Montana, winter elk counts have increased from a total of about 4,000 in 1980 to more than 17,000 in 2015. Mule deer numbers in those same hunting districts have declined by 64 percent. Mule deer also face competition from white-tailed deer, which generally do better in areas altered by human development. “ﬔe increase in conifers, elk, and whitetails in mule deer country is the new normal,” says John Vore, chief of FWP’s Game Management Bureau. “We’ll never have muley numbers in western Montana like we did in the 1980s unless we can magically change all that and make everything like it was 40 years ago.”


The fact that predators don't even get a mention insures that it is all down hill for mule deer from here.
Click to expand...

If all this is correct then why are there plenty of mule deer does in most of region 3 and very few bucks? Fawns are dropped at a 50/50 ratio at birth.

Three years after that ratio is probably 15/100.

Conifer encroachment, elk and predators reduce the buck population and not does???

I have no doubt all the issues you cited affect overall deer numbers, but they aren’t the main factor causing skewed buck to doe ratios.

If you think that there are plenty of mule deer does in most of region 3, then Diamond hitch is right.

Granted “plenty” can be interpreted in vastly different ways.
Perhaps it would be more appropriate to say something to the effect of there are far more does than bucks in Region 3. Is that better?
M

The primary mule deer problem in region three is not the buck to doe ratio, it is mule deer population on their traditional range. I would bet a dollar that 312 has less deer now than 20 years ago even though it is on permits.
M

One area that I hunt has close to 50% bucks after season, but it also has so few deer that you can go a couple of days without seeing one. This in an area that it was not uncommon to see 50 deer in a day 20 years ago. This area has very little hunting pressure. I am talking the early 2000s, not the 80s or the 60s.
B

Habitat issues for mule deer in places are very real, but as one other member posted the biggest problem is high velocity lead.

Sense a bit of reinventing the wheel.
There are organizations who's primary objective is focused on specific wildlife and mutual habitat interest. If there holds an interest, established sources exist. The cart and horse are present. Become active with such if you want to support Mule Deer.
I'm not a muley focused person though I donate annually because they invest time and resources towards our children's future.

In April 2020, Gallatin Valley Land Trust with the assistance of businesses, organizations and individuals (including MDF) purchased 160 acres in Middle Cottonwood canyon to protect important wildlife habitat and the popular Middle Cottonwood trail. On August 18, 2021, those 160 acres officially became public lands. GVLT was able to convey the property to the USA for inclusion into the Custer-Gallatin National Forest. 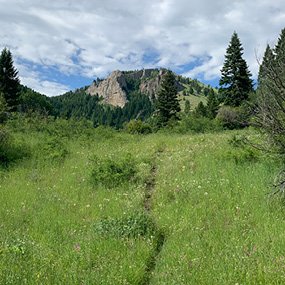 Your public lands just grew by 160 acres! In the record-setting speed of 16 months, GVLT was able to convey the property to the USA for inclusion into the Custer-Gallatin National Forest.


My interest is on elk and whitetail and play around with the others. “This is a prime example of a family that understands both the wildlife and public access values of their property,” said Kyle Weaver, RMEF president and CEO. “We thank James and Connie Haddox for asking us to help conserve it.”

Not knocking anyone for habitat interest. Definitely valuable though support organizations who's already experienced with habitat enhancements.

Not knocking anyone for habitat interest. Definitely valuable though support organizations who's already experienced with habitat enhancements.
Click to expand...

Agree to a great extent, but - Since FWP is the constitutionally mandated manager of the wildlife resource for the benefit of all Montanans, it does make sense to have them working iwth land managers to find better outcomes relative to areas that need significant habitat improvement work done, especially since programs are in place to literally do this, with funding assoicated with them, yet no mandate from FWP.

LWCF funding can be used for this, as can Good Neighbor Authority staff positions at the DNRC and habitat staff at FWP along with allocated funding to DNRC on GNA in order to improve forest health and improve wildlife habitat while lowering fire danger.

Meanwhile, other states have their own funds available to do remarkable habitat improvement work in regenerating aspen stands, removing conifer encroachments, restoring beaver in areas in need of water management, noxious weed management, sagebrush habitat enhancement projects, prescribed fire, etc. The groups who do great habitat conservation work don't have the kinds of resources to actively engage in large scale improvements like states and the federal government do.

I think USFS should allow TNC to be "Stewards" for our R1 forests... We would see a remarkable transition for our wildlife's habitat. However, until we can get hunters to comprehend longer seasons do not equate to more hunting value...
K

Should we set a date for a follow up meeting to discuss goals for this group we are looking to form. I know some people who would be interested in volunteering for sure.

I think a meeting is a good idea. How many people are interested in showing up? Mid week works best for me personally.

In case you weren't able to watch the EQC meeting, there's some good information in there. Specifically for R3 folks - Rep Jed Hinkle wants a committee bill for outfitter welfare tags. It would be good if folks could remind the good representative how unpopular those tags are.

There's a lot of good discussion early on on the 14th regarding elk management and conservation easements. There's a ton of misinformation out there still on elk and the current EMP. It's disappointing to see how the current EMP is being represented by the agency and the total disregard of page 55 and the recurring thought that objectives set 15 years ago still influence elk management.

There's a lot of the typical shuck & jive you get at any political gathering, so don't have too many adult beverages when watching less your blood pressure will go up.