MNElkNut said:
I didn't compare public to private, I just used it as an example. I even said, this is private, but public is good too. I know public land bowhunters in western MN that routinely see 5+ deer per sit. That is not uncommon at all. I totally agree in eastern MN though with all the pressure. It was just a suggestion, sorry to ruffle your feathers.
Click to expand...

Planning to hunt a new to me piece of state land in bluff country on Saturday. About an hour south of me, which will hopefully eliminate some of that pressure. Plus, a first sit is always a good thing!
M

Got out once this past weekend. Flushed a few grouse on my way into a pinch point on a new piece of land for me. Didn’t see any deer, but the spot looked very promising, and I’m betting that a little more time in there, probably in the prerut would yield some deer sightings.

In other news, I found out that I drew a muzzleloader special hunt this year. It was my first time applying for those with the dnr system. Wasn’t expecting much, but happy to have drawn!
M

Got out for a quick after work sit last night. I went to a WMA close to my house, but that I hadn’t been to since spring. Apparently the dnr has been doing some thinning in there, because what was once a pretty substantial hardwood ridge was rather barren.

I found a spot with intersecting trails and sat for a few hours without seeing much of anything. I think this one can officially be crossed off the list for a few years. Once some regeneration happens, I bet it’ll be a decent spot, but until then, moving on. 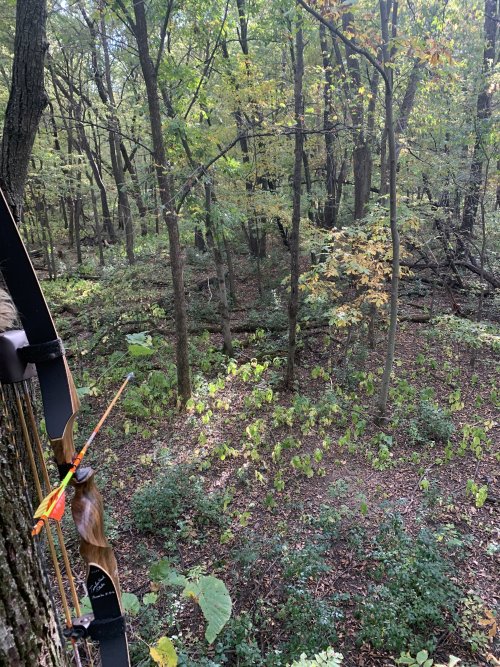 Do you always nock your arrows like that? Cock feather in? Never seen that before.

BrentD said:
Do you always nock your arrows like that? Cock feather in? Never seen that before.

Yep. Get the best flight doing that through paper and bare shaft. Seemed weird to me too, but it works! I nock cock feather up on my compound, but for some reason cock in off the shelf just works better.

MN_Bowhunter4 said:
Yep. Get the best flight doing that through paper and bare shaft. Seemed weird to me too, but it works! I nock cock feather up on my compound, but for some reason cock in off the shelf just works better.
Click to expand...

Maybe I should try it. Never have done it on purpose.
M

It may just be my release is that terrible. Who knows. Worst thing you can do is try it though.
M

@BoomerUSAF and I had been talking about getting together for a hunt for a while now, and finally made it happen on Saturday!

Our morning got off to a weird start when apple navigation took me to a road that parallels the actual one, which turned into me being later than intended. We hustled out to brush in our blind and settled in for the morning. Birds were definitely flying, but they were either too high or too far out, and neither one of us ever pulled the trigger. Despite the lack of shooting, I still learned a ton about duck hunting and am very grateful for @BoomerUSAF being willing to show a newb the ropes. We’re left the lot with a loose plan to try it again in the very near future! 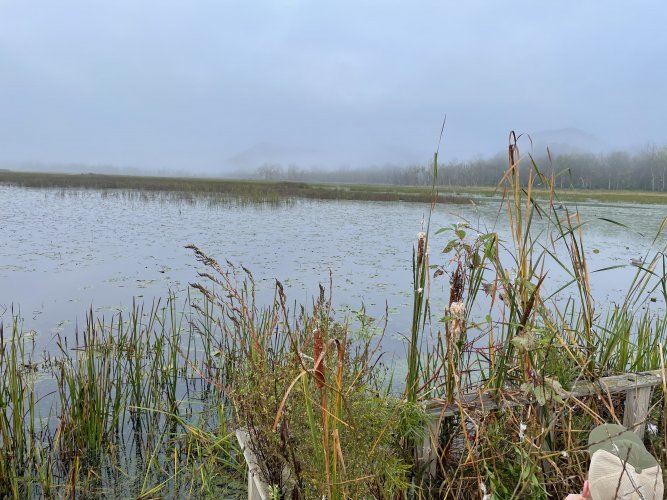 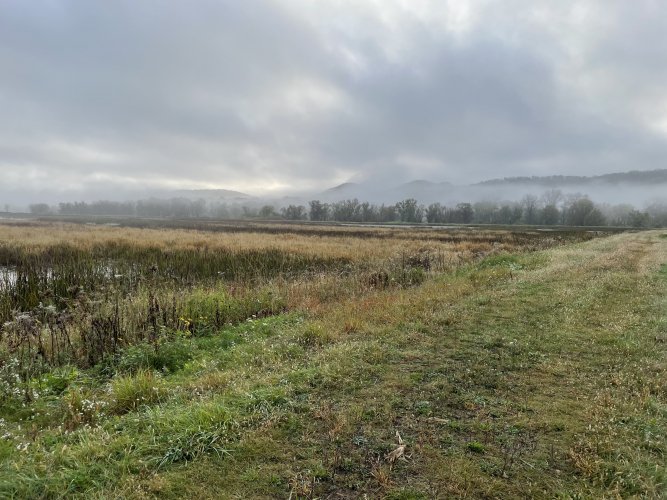 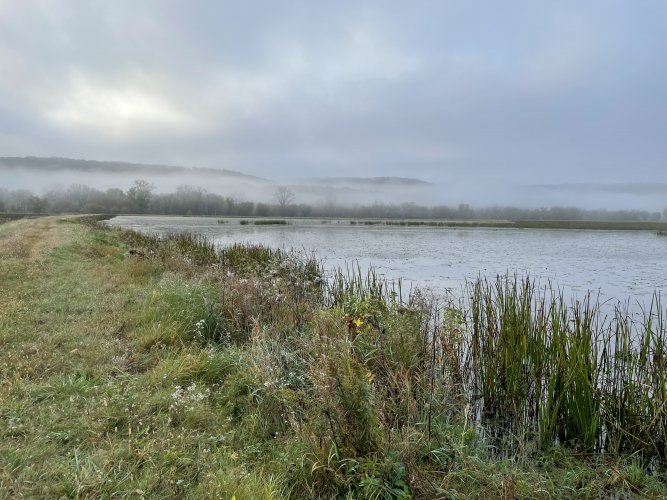 Sunday morning I snuck into a new spot where a patch of trees jutted into a corn field. The beans drying up all but shut my best spot down, so I was thinking the corn might be a good attractant at this point in the year. I had my saddle gear to hunt from a tree, but didn’t find any place to set up that was in a good position for both the wind and the trails through the area.

I ended up jumping into a giant cottonwood tree and using it as a natural ground blind for the morning. I lasted about 2 hours before getting down and scouting my way back to the parking lot. Along the way I marked what looks like a dynamite spot, as well as a major doe bedding area. Good intel for the next hunt in there! 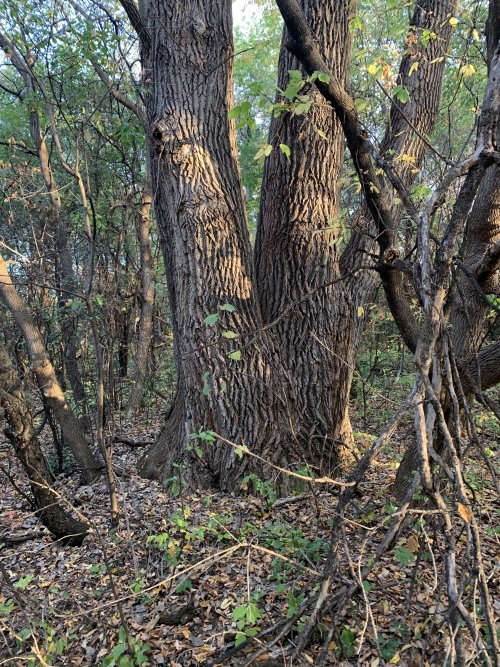 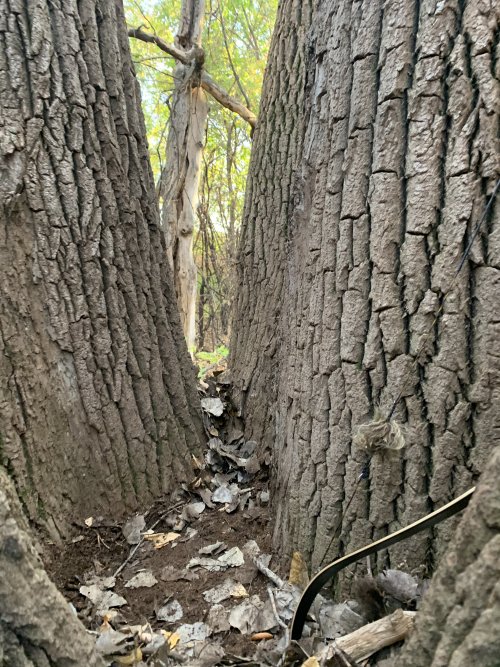 We will be on the X next time! I’m looking forward to it.
M

I got out this morning for a quick duck hunt before work. This is the spot I kicked up a few woodies while dove hunting. I got a few decoys set up, and hunkered into a downed tree for cover. Birds were flying this morning. I think I saw around 20 woodies in all, but I missed the X by about 500 yards. I decided to make a play on them, but the long grass along the creek made it tough to be quiet. I successfully jumped them, but they were about 75 yards away when they got up. Dang!

I marked the spot where they first landed for another trip, likely next week sometime.

The sunrise was crazy good this morning. “Red skies at dawn…” 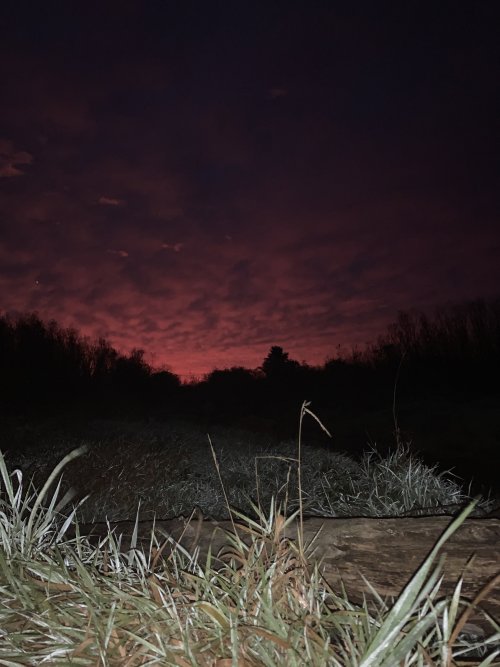 This past weekend was the second period of the MBRB hunt. I had my stand set on Thursday afternoon and was excited for 3 days of prerut hunting.

Friday morning was nice and chilly. First frost of the year when I woke up had me pretty excited. I was a little later than I’d hoped getting to the park, but was settled and ready well before first light. It was a slow morning without any deer seen. The afternoon was much the same. Although I did hear a deer walking behind me after sunset, I could never make it out through the brush. The day ended uneventfully.

Saturday morning was again cool. And, like Friday, no deer seen in he morning hunt. I was getting a little frustrated at this point, as the park was slow for everyone. This second weekend is typically the better one, but it was slow all around. I kept reminding myself that it only takes a few seconds for things to change. With that in mind, I returned for the evening hunt. The evening played out like the one before. No deer for the bulk of the sit. Then, with 20 minutes of shooting light left a small buck came into my area. He approached from my 2 o’clock and I got drawn. He turned and crossed my face, and I tracked him through the peep over to 10 o’clock. He stopped a few times, but each time his vitals were covered by trees. I held out for as long as I could, but eventually had to let down. He walked off unscathed, having never offered a shot.

Sunday morning was a carbon copy of the other two mornings. Having some home obligations I’d been ignoring, I pulled stakes and called it a hunt. In total, I saw one deer for the weekend. Pretty rough.

The group as a whole didn’t fare much better. I think we took 6 deer total, over 6 hunting days with 24 hunters. Needless to say, I am planning to move on from this hunt next year. I told my wife to remind me of this frustration when I’m applying next year.
You must log in or register to reply here.