History Found In the Field

Sheltowee said:
Ruins of an old homesteader farmhouse that I camped next to one night and a Works Progress Administration building dated 1938 in SE Colorado. I'm guessing the WPA building is a bunkhouse for WPA workers. Anyone have any ideas?
Click to expand...

Looks like a chapel. I wouldn't think a bunkhouse would have so many windows. Or perhaps it was a repair shop. Possibly studio for arts and crafts. The windows would be for lighting.

OntarioHunter said:
Looks like a chapel. I wouldn't think a bunkhouse would have so many windows. Or perhaps it was a repair shop. Possibly studio for arts and crafts. The windows would be for lighting.
Click to expand...

Or an old school house.

Sheltowee said:
Ruins of an old homesteader farmhouse that I camped next to one night and a Works Progress Administration building dated 1938 in SE Colorado. I'm guessing the WPA building is a bunkhouse for WPA workers. Anyone have any ideas?
Click to expand...

My bad. I was thinking CCC not WPA. WPA built all kinds of public structures: post offices, court houses, etc. I agree, this was probably a school. Someone should save that structure.

OntarioHunter said:
My bad. I was thinking CCC not WPA. WPA built all kinds of public structures: post offices, court houses, etc. I agree, this was probably a school. Someone should save that structure.
Click to expand...

I actually went into a building like this by Genoa in Colorado on invite of the landowner. I hunted deer and antelope in Colorado GMU 107 and had a ton of permissions because my family lived in the area for a spell and my uncle lived in Genoa and delivered mail. I got to talk to many at the local cafe and got permissions built up that way till I moved to Wyoming in 2004. Telling ya best tasting mule deer in that area. But anyways, back to the topic...

I got to go into one in Lincoln Couny northeast of Genoa a bit and found all kinds of old school material dating back to the 20s and 30. Was neat to read through them. Did not take anything as I promised the owner I would leave everything as I found them. And the math books I looked at a whole lot different than new math today.
Last edited: Nov 4, 2022
T 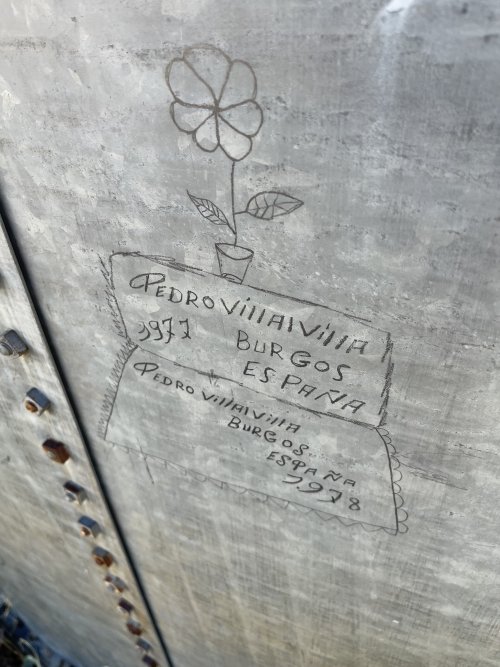 Found on some old stock tanks no doubt drawn by shepherds. These things were covered in drawings (most if you could imagine by lonely young men) and ramblings that I can’t translate. I believe the oldest one I saw was from 1950.

Last week I slipped climbing up a deer trail at the bottom of a huge cutbank next to a small creek. Came face to face with the remains of a long buried buffalo horn. My phone was dead so no photo. After returning to my vehicle and recharging, I hunted the south section of the same BMA property. While chasing pheasants on the creek I saw something white gleaming from another cutbank. 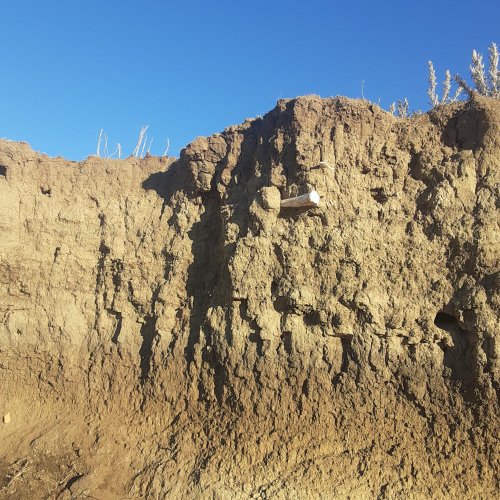 It appeared to be a deer leg bone. Above it was another leg bone that had been crushed to access marrow. 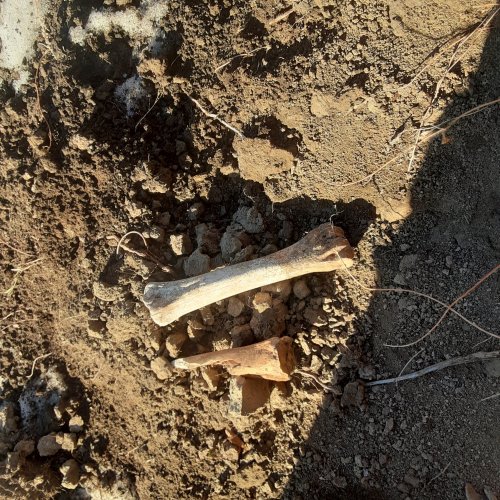 Yesterday I returned to the trail with the bison horn. I planned to dig it out of the clay. Unfortunately, cattle had been in the area and damaged the horn. 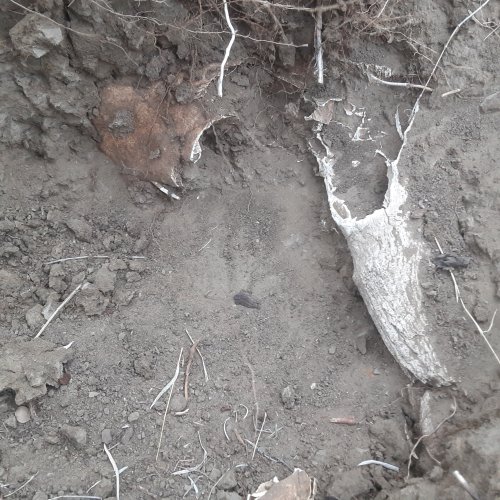 The clay was still frozen ... as were my hands. I had to give up but just as well. The bone was crumbling. I did discover more of the skull. Looking around I saw more parts of the skeleton exposed in the cutbank. 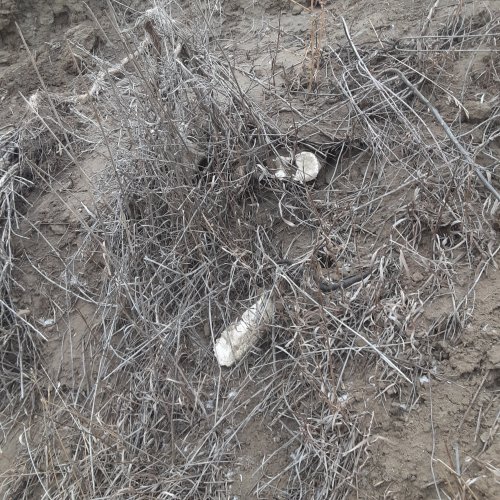 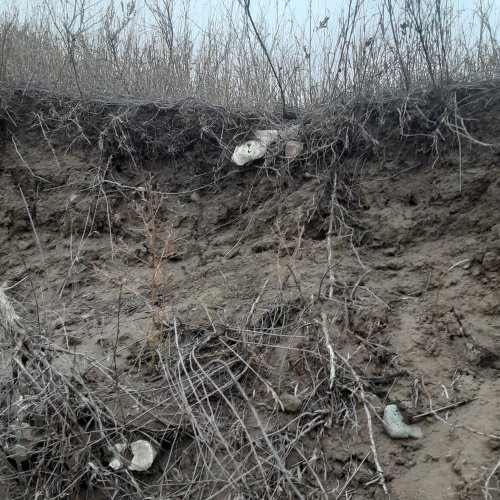 At first I thought I was looking at a buffalo jump but it appears there was only one animal. I suspect it died next to the creek and was covered by a cutbank slump.
Last edited: Dec 1, 2022

Back in the early 70's a friend and I were quail hunting in the Comanche Grasslands East of Kim, CO and came across a house and outbuilding as well as a root /tornado cellar which had been abandoned during the Dust Bowl days. The sand was still piled up in the protected areas but much of the soil around the house was hard packed and blown clean. Imbedded in a clean area was an aluminum tax token which I admit went home with me since I'd never seen one before and was curious about them.
T

In 2018 I got a late season cow tag here in Nevada. At that time, the tag ran basically all of December and all of January. I had a few close calls, but didn't end up filling my tag until the last day of season, solo, in the middle of absolute nowhere. I drew the tag again in '21, but now the season was only most of December. So, I got out there early in the season, and went to the place that I harvested before to check for sign. As I was leaving the truck, I nearly stepped on this awesome old bottle sitting at the base of a sagebrush. Its not a particularly rare bottle, but being from the turn of the last century, it somehow survived 120ish years outdoors without getting trampled by cattle or elk. There was no point in time that this area was commonly traveled, its been past BFE forever. It possible that it ended up there long after it was made, but that seems unlikely. I've found lots of old bottles in dumps near towns of buildings, but this was a couple hundred yards off a rough road to nowhere. 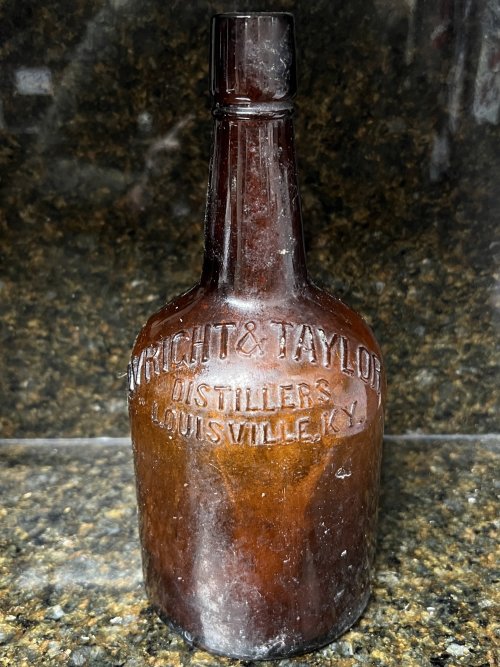 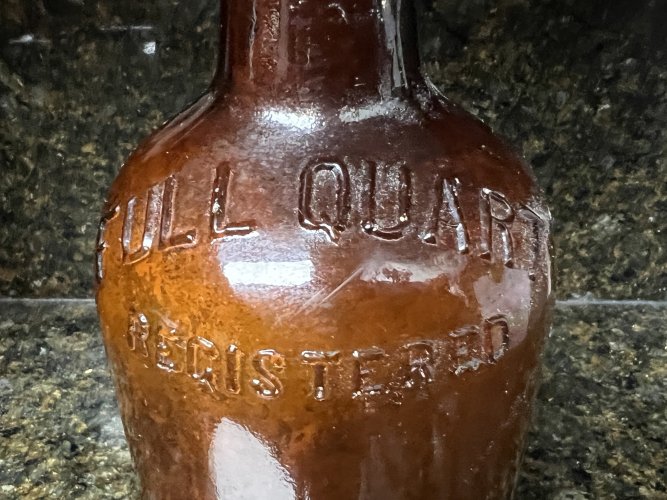