Grandpa and the kid

Headed far enough north to get roaming cell service from Canada this week for an early Turkey Day with my Dad. When a friend of my Dad heard that my son had a tag he invited us out to his 287 acres that borders the Kootenay River north of Bonners Ferry.

So the old man and I took the kid to the range as a prone shot would be likely. 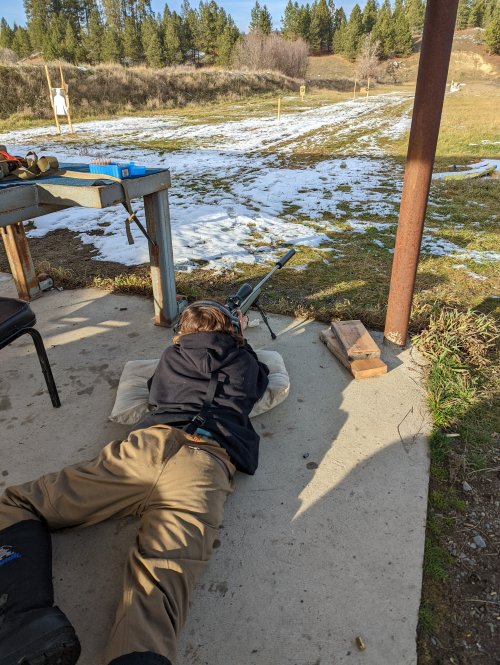 We headed out for the "blind" set up which was two pallets tied to a T post....I think he saw it on Etsy or some DIY forum. 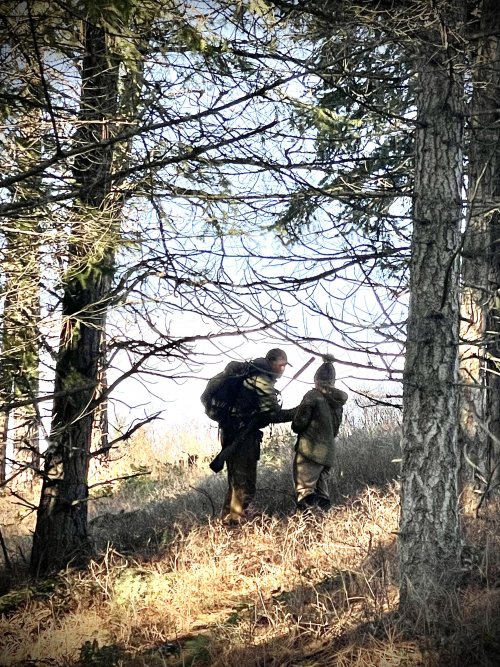 The whole fam damly got settled in, Grandpa made hot cocoa and coffee for everyone. 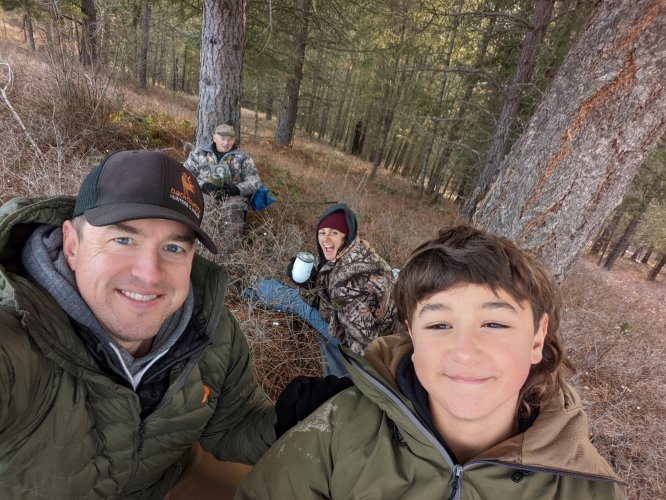 On our way in there was deer on the far end of the clearing, and either it was us or something else they didn't like that pushed them away. There was a buck in the group, but he was bedded just off in the cover and I spotted him in the sun. When we got to the blind, I never saw him again....and never saw him leave as the others did, but it was early.

About an hour later a doe showed up, but kept her distance. We had a knoll in between us and the boss said let's crawl up. "Really, it's kind of wet, and muddy and there's a few patches of snow left are you sure"? "yeah Dad, let's do this". 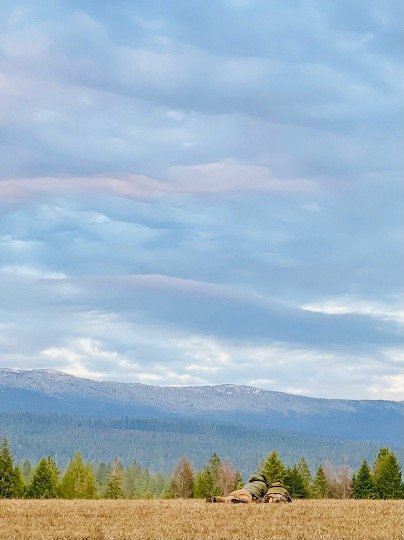 The doe trailed away and behind hill, then I saw the buck from before. He was on the edge, feeding and it took him 20 minutes and a few more does in the field to realize it's the rut. He came to 280-285 and settled feeding again, he'd face us, then broadside, face us, broadside. The little man hung tough, doubted himself, got cold, needed his hands warmed, felt good, doubted and then finally settled in behind the scope.
"It's up to you, only if you're sure"
"I'm nervous"
"That's okay, only if you feel 100%, otherwise we can come back later"
"I can do it" 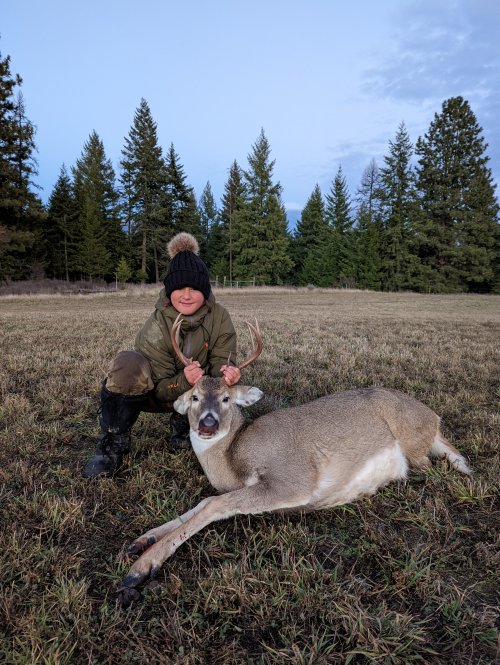 Ever since he passed hunter education I wondered what this picture would look like. I was so glad his first deer was with my Dad.
(sorry about the tongue) 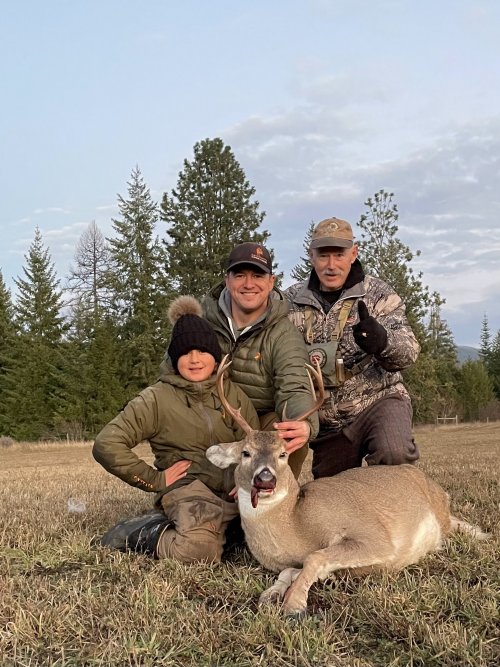 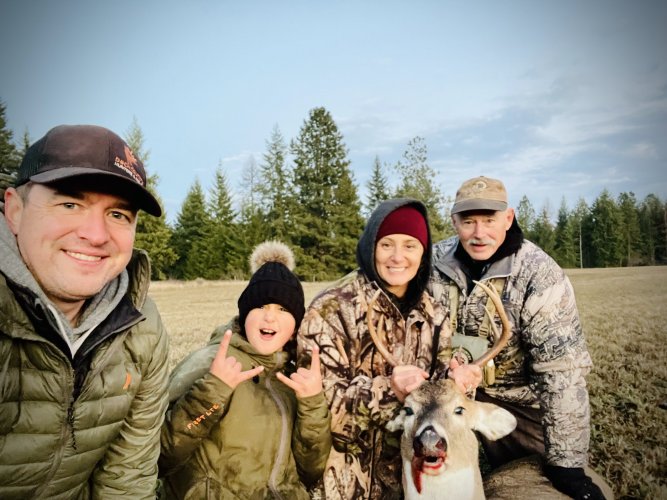 There's an old saying, "nothing you say can hurt me, I use to hold the flashlight for Dad".....headlamps have fixed this. 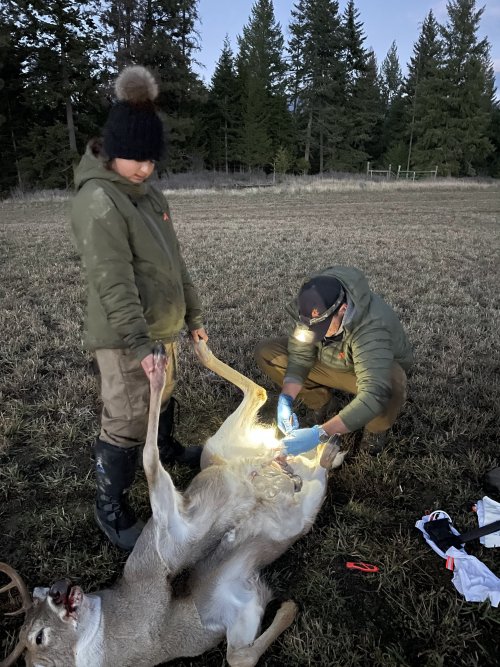 Loaded up and headed home. I don't get many chances to have an animal whole and I plan to take full advantage. 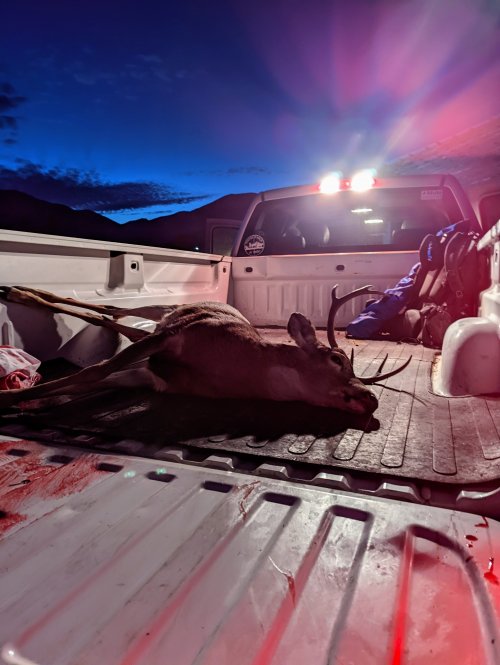 Looking forward to many more hunts in the future, hopefully at least a few more with my Dad and the whole family.

Great story, great photos. A photoshop handyman can take care of that tongue. Thanks for sharing.

Awesome, can’t wait for the day when my kids go on their first hunt!

Congrats to everyone involved!

Love it! Good work! So pumped for you guys!

Pure awesomeness. The family pics are as good as it gets. Also can very much relate to the holding the flashlight for Dad comment—biggest reason I never learned how to work on cars.

Love it! Awesome for the whole family.
F

Wow ! Three generations AND mom !! Thanks so much for sharing !

Awesome! These are the best stories!

Family hunts are the best for building lifelong memories. Congrats to all three generations!
@jryoung my editing skills are rough, but hopefully you don't mind me giving it a try. 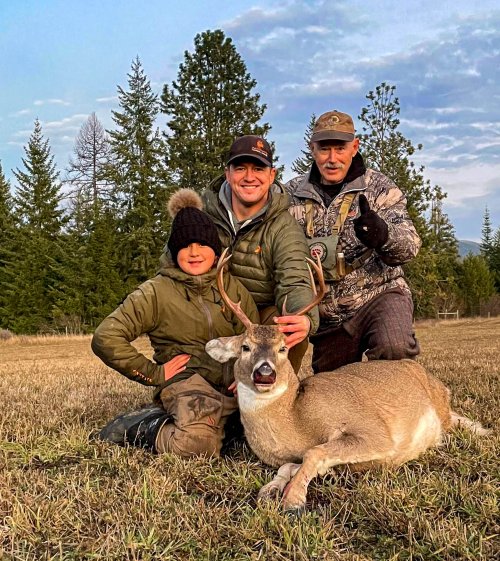 fishing4sanity said:
Family hunts are the best for building lifelong memories. Congrats to all three generations!
@jryoung my editing skills are rough, but hopefully you don't mind me giving it a try.
View attachment 202955
Click to expand...

Thanks @fishing4sanity been toying with the "magic eraser" function on my phone as well.

Congratulations to the whole family

Great story. Nicely done, and congrats to the whole family.

Fantastic stuff, and what hunting is really all about.

I can only imagine how strong the urge must have been for your dad to track down some scissors and fix that mullet.

Awesome hunt! Congrats to everyone. What secret dishes do you have planned for this buck since he came out whole?
You must log in or register to reply here.