Hey guys, I bought a house this week to flip and found some miscellaneous reloading supplies. Im fairly new to reloading and so please excuse my ignorance. I have a couple of questions you might be able to help with.

First, what are these speer half jackets for? They are shaped like cups. 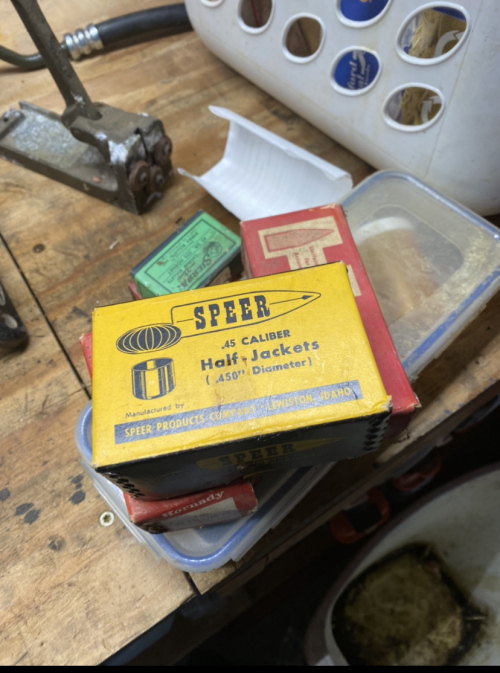 Second, there are several Pacific dies that seem to be the same size as modern dies. My understanding is they are the predecessor to Hornady and are usable with modern presses. Are they good? (meaning will they have the same accuracy as new dies? 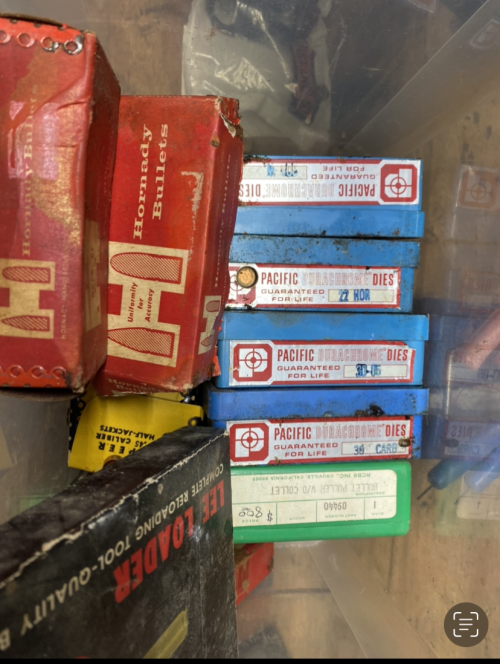 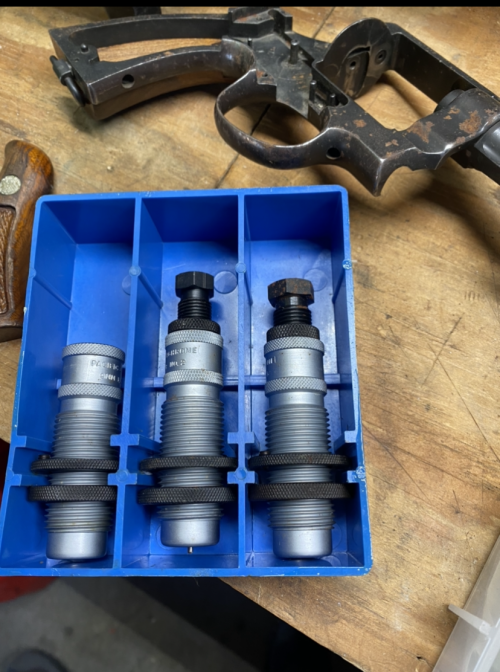 Finally, there were multiple bottles of old powder that have some rust on the cans but the interior seems uncompromised, are these usable or should I just keep them as vintage displays? 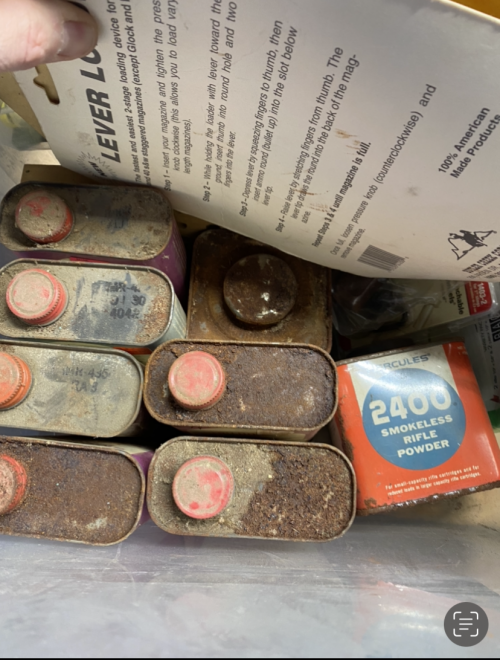 IDK on the half jackets. Were there any bullet casting components there as well?

Dies should be fine, clean and use. Those were very good dies.

Powder, I usually just give old powder a sniff test. But those are so old I'd just assume it's not OK and keep as collector items. Although, powder is like gold these days. Now if you found some primers...

The 1/2 jackets are an old style of semi-wadcutter for pistols. The jacket kept the bores cleaner than lead, but they were still cheap enough for plinking ammo or specialized SWC loads for target shooting. They're great for the 45 colt.

I would dump the powder. The condition of the can concerns me more than anything. Powder is a pain to find right now... but that stuff? No way.

mevertsen said:
I would dump the powder. The condition of the can concerns me more than anything. Powder is a pain to find right now... but that stuff? No way.
Click to expand...

I think when Hornady got into reloading tools they bought out Pacific. Those Pacific dies probably have pretty much the same threads as most other's, I think it's 1-14. Hornady did change to a newer die that use's some kind of collar that the die sit in and then that collar I think twist's into the press faster. My though on it is if you really need to save 164th of a second screwing in the die, go for it! The powder I would not throw away right away. I'm not sure I could tell good powder from bad smelling it but many claim they can. Dump some out on a plate and look at it. Any fine stuff laying in it? if not take it to someone that reloads and see if they would be willing to try a mid range load of it. The can's I think you said were rusty on the outside, not inside. If you can't get a good answer if it's good or not, throw it away. Problem for me is the price of powder today if you can even find it to begoin with. I have never fooled with half jacket bullet's but seems every time I heard of then they were for a 45 Colt handgun. If it were me I'd find someone to get them to melt them down for either cast bullets of fishing weights. Internet says scrap lead brings $.60 per pound but I've seen it go for quite a bit more, like close to $5 a pound. Either way your not reloading so they have little value to you pother than what you can sell them for. If you started loading and wanted a 45 Colt, still might be a good idea to either cast them yourself or sell them. Start reloading them as is and I'm not sure how much trouble it would be to find more. So load up a few box's, use up some primers and some powder and no more bullet's, ya get to start all over from square one! That's a very old Speer box, Speer might not even make them anymore. Those Hornady bullet's look like the old Hornady spire Point ones, very very good bullet's. That Sierra box is pretty old also but I'd guess the bullet's are fine. Looked at the powder again and looks like more dirt than rust to me, foind someone to check it out before you dump it. If its still good put the good stuff in different container's and seal it, If you put it in glass, paint the glass black to keep light off of it. Sandwich bags in a cardboard box should work well.
G

I have read that old powder makes good fertilizer. Dont leave it in piles where you throw your smokes though.

Sprinkle the powder on your lawn and then send the empties to me.
S

The Pacific are fine dies. I have some and still use.
The powder, while prices are high now, i think i would sprinkle as lawn fertilizer. There may be interest in those old cans.
I'd put the empty cans up for sale, or give away.
There may be someone interested in the half jacket bullets. Find how much a bullet weighs & put them up for sale.

Ben Lamb said:
The 1/2 jackets are an old style of semi-wadcutter for pistols. The jacket kept the bores cleaner than lead, but they were still cheap enough for plinking ammo or specialized SWC loads for target shooting. They're great for the 45 colt.

Agree w/ @marksjeep on the dies & powder.
Click to expand...

I shot a few boxes of the old Speer half jacket bullets in my 44 but I think OP just has the jackets with no core. Lead wire and some sort of swaging process would be needed to make an actual bullet.
D

BucksnDucks said:
Dump it or put it up for $50 on Gunbroker
Click to expand...

So true. If you ad the word vintage it doubles the price

That powder has some age to it
S

dan valasek said:
So true. If you ad the word vintage it doubles the price
Click to expand...

An-tee-que... lol
You must log in or register to reply here.