I am 55 years old and have never really been angry enough at bears to want to hunt them. Partially due to not having any readily available here to hunt, and not really knowing how to hunt them. Like a lot of you, I'm sure, I am on the email list for a number of hunt brokers, not sure how that happened, but it did. Anyways, I always look through them and usually the rates they have for the hunts just helps to justify me doing it by myself. And then a couple of months ago an ad comes out for a black bear hunt in Idaho, two bears and a wolf for an extremely reasonable price in my mind. I really have a hankering to get a wolf. So I reply to the ad and a couple of days later I get a response from the broker saying that hunt was already booked, but they could set me up next year for a nice price. No thanks.

So now I had the bug to do a bear hunt this spring. It didn't take a lot of online research to find the outfitter that was advertised by the broker. Their website had the same pictures, etc. Their website had the same hunt advertised. A couple of emails later it was confirmed that the hunt was available. Knowing that I would be applying for moose in Idaho, which meant I would be buying a hunting license anyways helped me make up my mind and book the hunt.

Got to put a little dig in here, I guess hunting bears over bait is acceptable but hunting deer over bait isn't. Just for the record, I don't have a problem with either.

On to the trip, 1999 miles according to google maps, headed out early Saturday morning and made it to Pueblo CO and met a friend there for a steak. After getting back to the hotel, I received a phone call from my neighbor and knowing that my wife wasn't home, I knew that this couldn't be good. We had received over 3" of rain in about 30 minutes and he thought my propane tank had floated away. He sent me a picture and while not actually away, it had floated and was stopped by the line running into the ground. Nothing I could do about it a 900 miles away. Made a couple of calls on Monday and got it taken care of.

Sunday evening I ended up in Butte and then made the remainder of the trip Monday morning so I could be there before noon to get ready for an evening hunt.

A few pictures from the trip there.

Flooded yard and propane tank being held somewhat in place by line. 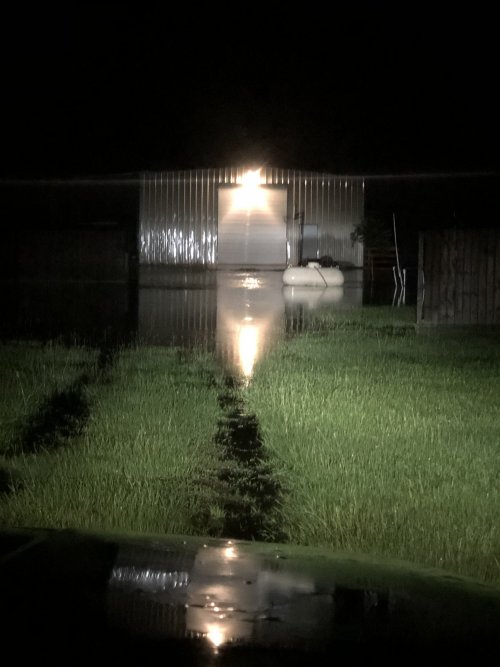 Cool picture with a bit of sun, clouds, mountains and grass in it. 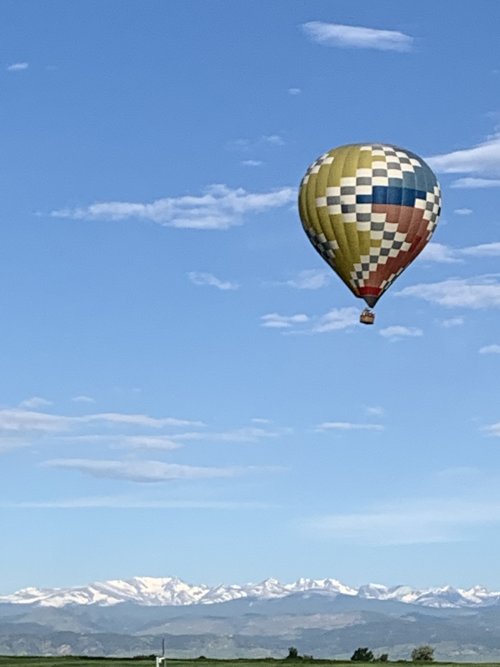 Spotted this sign in a few places in Wyoming and just had to stop and record it. 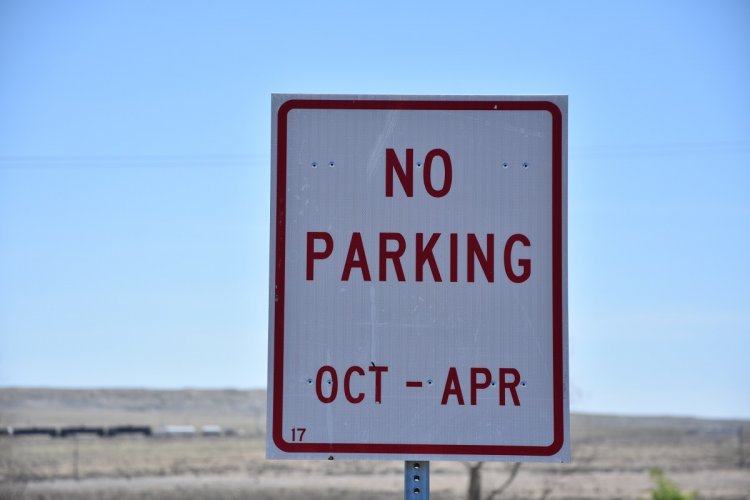 Tunnels for both vehicle traffic and trains in Wyoming on Highway 20. Really scenic route. 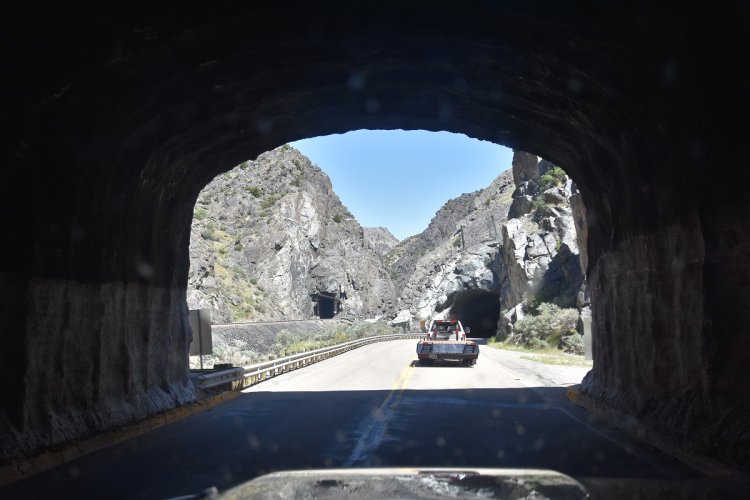 Saw a bunch of these signs on Hwy 20 also. Rock has been there a while. 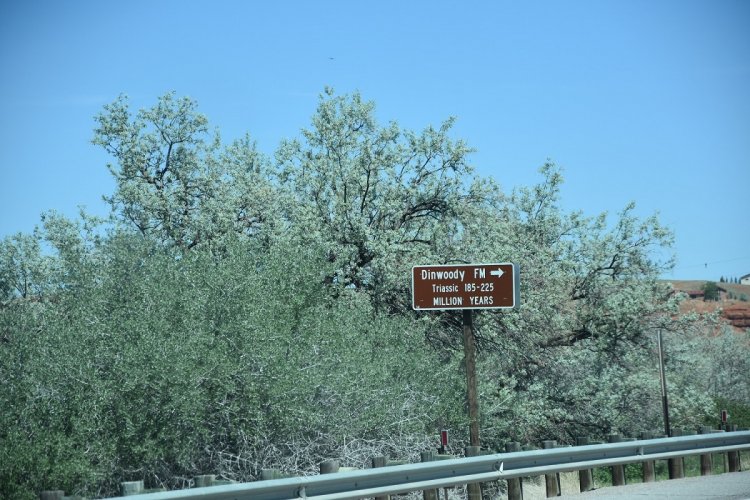 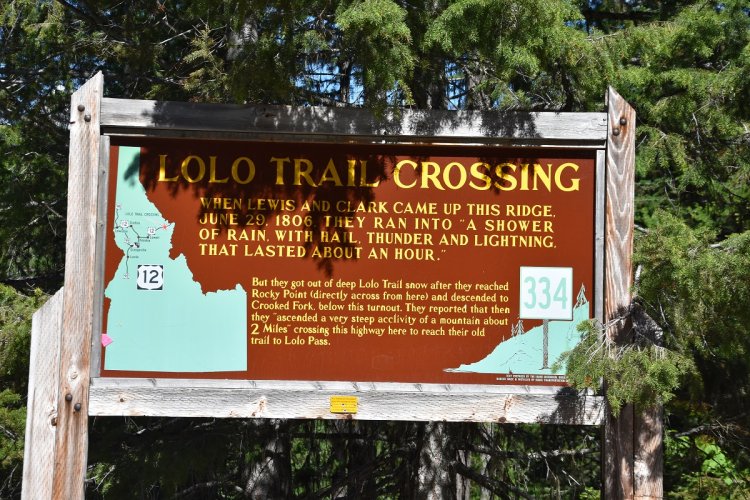 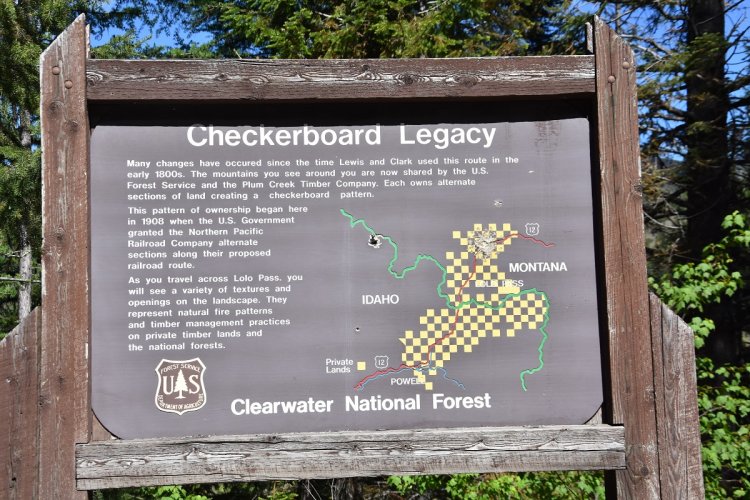 While driving through Idaho, I had the scenic Lochsa River running beside me almost the whole way. 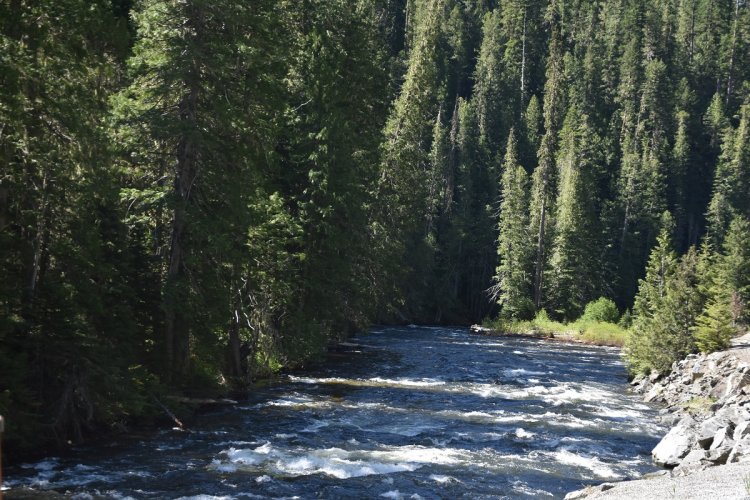 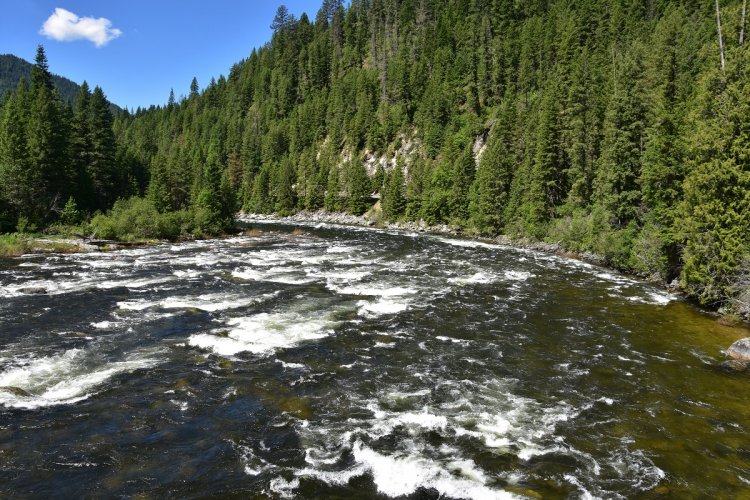 Boulder Creek was a roar I heard in my ears the whole week, did not matter if I was in camp or setting on the stand. Beats the hell out of hearing Houston traffic all week. 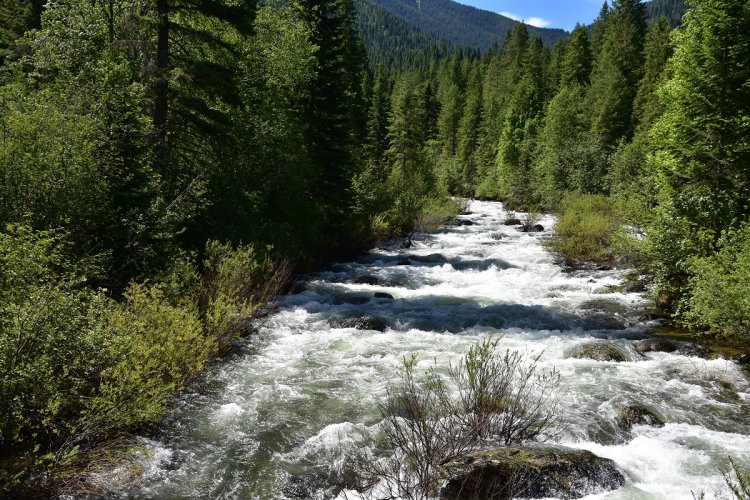 Looks like a great trip. Keep us posted on the hunt.

When I got to camp and got settled in and met with the guide. It would be me and one other couple in camp for the week. Only the wife of the couple was hunting. The guide was telling us what to expect for the week. Basically going out on horses to the stand and hunting every evening from about 3 - 4 until dark. He then asked if we might be interested in hunting in the morning once or twice behind the hounds. This was a bonus that we both jumped on and said yes.

For the people in the area, I'm sure this is nothing new, but it gets daylight right now at about 4:30 in the morning and doesn't get dark until 9 or so at night.

First afternoon get on the stand about 4:30 and hunt until dark. Didn't see anything. When the guide came to pick me up, he showed me a bear on camera at a different stand and said I needed to kill it. It was a nice looking blonde bear. I said ok.

Tuesday morning we get up early and head out to hunt behind the hounds. He had 10 dogs and that was an experience. They got on the trail a number of times, but was never able to get one hot enough to actually chase a bear. After looking at the country there, I am almost kind of glad they didn't. It is steep.

Tuesday afternoon I am on the new stand and end up seeing two bears a decent looking black that just came out and then went back into the woods without going to the bait and a chocolate that stayed at the bait for about 20 minutes. Passed on him.

Wednesday I hunted from about 3 to 9 and didn't see a thing. Guide had pulled the card from the camera and it showed the bears coming in early. Made a plan to get up early Thursday and hunt all day.

Thursday morning at wake up and lasting until about noon was rain. Some pretty heavy. Stayed in that morning. Hunted in the evening again and got skunked again. Pictures again showed bears coming in early.

During our hound hunt, we also had to become lumber jacks as there were a couple of trees across the road. 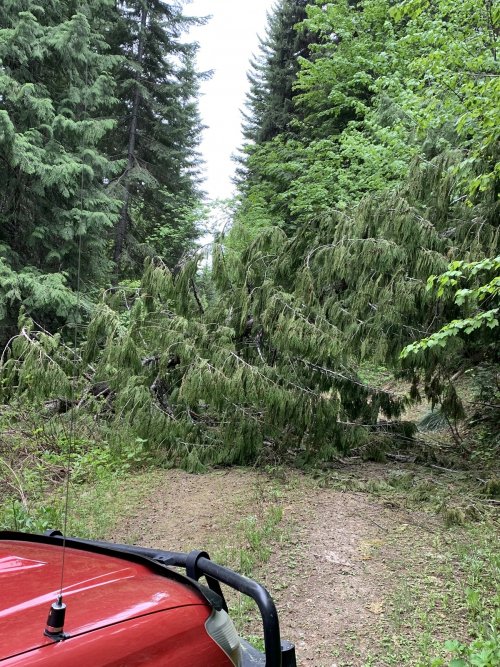 In this picture, the chain saw is locked up by the tree. We ended up taking the head off the bar and then hooked the winch line off the truck to the tree to pull it off the road. It was touch and go for a second on whether or not the truck was going down the hill with the tree. It tried to, but didn't, thankfully. We were even able to salvage the bar and chain and continue using them. 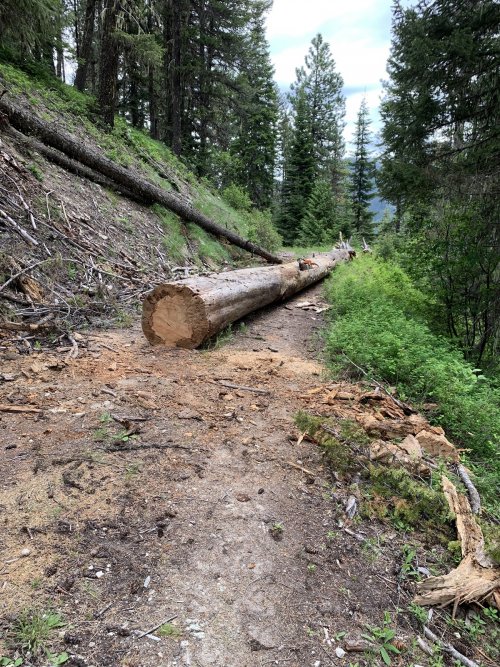 This is just a shot at the river and road down below to kind of show the steepness and how thick the trees are in this country. 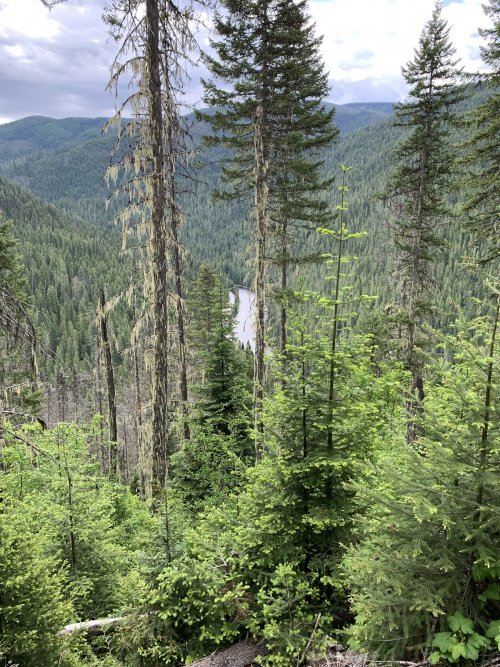 Fantastic thus far! So long as your house didn't float away (no bueno), or a bear didn't climb the backside of your stand... actually if you lived to tell the tale - that's flipping Fantastic as well!

Gonna try to finish this up. Have a few videos I want to post.

This is the Lochsa River near the camp.

Boulder Creek near the camp. Both of these waterways were running hard.

Horse ride out to hunt first evening. Riding right next to Boulder Creek

Tuesday hunting with the hounds.

This is the bear that I got a short glimpse of Tuesday evening. The video is over a minute long, but only the first few seconds that show the bear are relevant.

On to the final day of the hunt, Friday, the guide and I decided that the best approach would be to go out and get on the stand first thing in the morning and hunt all day. I was in place by 5:30 AM and planned to stay until dark at 9:00 PM. It was going to be a long day.

Between 10 & 10:30 I had not seen anything and decided to stand up and stretch as I had just been sitting on the ground the whole time. After that I figured eating a sandwich was a good plan. A little after 11, the eyes started getting heavy, so I laid back and was taking quick naps. I would look at my watch each time and most were in the two - three minute range. The last time I looked at my watch, it was 11:18, the next time I looked there was the blonde bear at the bait site. I reached up and got my phone that was on the tripod to start recording and then slowly set up, grabbed my gun and got ready. He was only about 40 yards away from me, facing in my direction, but not looking at me. The video below tells the rest of the story.


But wait, that wasn't the end of the hunt as I still had a second bear tag. I went over and checked on this bear, and he was definitely not going any where. So I got back into my position and waited. About 4:30, I said I would give it to 5 and then head in as it was only about a 20 minute walk to get back to camp. As 5 approached, everything just looked great and I decided to go ahead and stick it out the rest of the day, which if I made it to 9 would only be 15.5 hours setting on the stand for the day.

When I had just about finished my second book of the day at 5:30, I looked up and saw a black bear at the bait site. I hastily turned the camera on and started videoing (so I thought), grabbed my gun and took a shot. This bear was in the exact same position/location as the blonde one was. With pretty much the same results. After the shot I reached over to turn the video off and realized it was already off, as apparently I didn't hit the record button.

Here is a picture of where they ended up. I joked with the guide that I stacked them like cord wood. He didn't really know what I meant until I showed him this picture of their final resting place. Yes the black one was really small. I had some buyers remorse on shooting it, but that is one of those things you can't undo. I am still happy and thrilled by getting two bears on the last day. Still got to figure out a way to get my wolf. 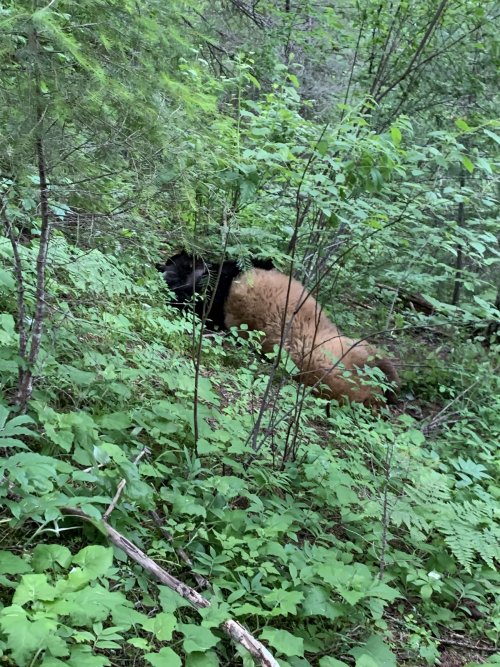 A pose with both bears prior to skinning out. 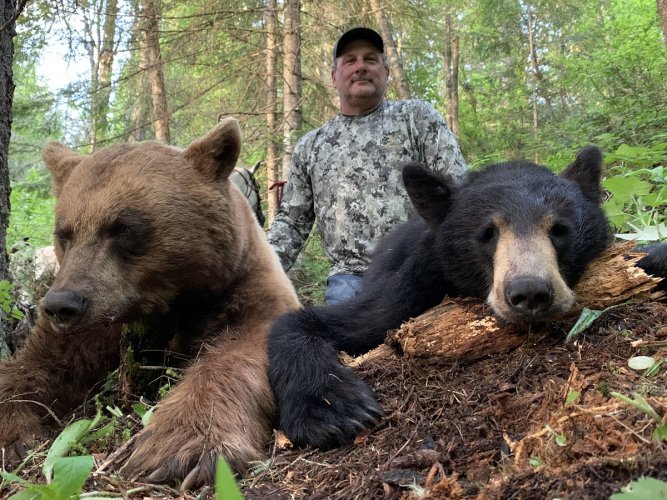 Appreciate the write up! Love ID. I live next door.
S

Congrats!! You sure hammered that blonde in the video

Awesome bears and story. Thanks for sharing.

Congrats! Thanks for taking us along on the hunt.

What a way to wrap it up! Grats!

That cinnamon is a beaut! Head looks massive! Sure appears as though he's gained his spring fill.

Thanks for the write up, pics and, videos. Beautiful country.
F

Congrats!! Thanks for the story and all the great pictures!!
1

Congrats! I very much dig the color of the first bear.

Wow, love the “as THEY lay” photo

Nice shooting!
You must log in or register to reply here.

What are your thoughts on this bear?