I would like to thank everyone who helped me out with this hunt. I had several people that gave me great information and one gentleman even sent me maps, several sent me way points. I actually had more spots than I could hunt in 4 and a half days.

I had my son’s senior year football game the night before the opener and I wasn’t going to miss it, so I missed opening morning. I drove through the night with my nephew we arrived that afternoon and headed to my number one spot on my map. Walked in to a wallow and there was guys already set up there so continued on up the trail around 3/4 of a mile and heard elk bugling. The timber was thick but the chase was on until dark, we just couldn’t see the bulls. We walked out in the dark and set up camp. In the morning we returned to the spot we left off the night before. At first light there was a lot of bugling. Sounded like the bugles was coming our way so we waited. There was a shot in the distance, we could hear the elk running through the woods. We waited and eventually we saw spikes, cows, calves and a raghorn or two. Things went quite except for what we thought was one elk bugling, one bugle right after another. The bugling went on and on but seem to be getting closer. The two of us thought for sure it was another hunter so we got up and walked to the top of the ridge. When we arrived at the top we saw some cow elk and so we stopped and looked around. The bugling that we thought was a person now was getting closer. Then there he was a nice 6 x 6 at 25 yards but could only see his head and antlers. Another bull below him rips off another bugle. It wasn’t a person bugling, it was 2 bulls going at it.
The bull turned and was out of sight eventually we saw him go over the ridge, we never saw the other one. This was our first mistake.

Frustrated from our mistake number 1 we took a nap. When we woke we walked down the ridge the bull went. After a while I told my partner I was going to use the facilities, he said okay I am going to go sit by that tree. I went my way he went his. When I came back he said that the 6 x 6 we saw earlier was bedded on the other side of the tree that I was going to sit by. The bull got up and walked off at 15 yards. Mistake number 2 (going to the bathroom). My nephew wanted to try and catch up with him so he told me to drop my pack so we could move faster. I said no we might end up a long ways away. He eventually talked me into leaving our packs. Mistake number 3. We never found him but in the process we heard bugles and off we went chasing bugles, hill after hill, without our packs. Around 2 miles later we had 2 bulls bugling at each other like crazy. We positioned ourselves between the two. The first one that showed himself was going to get shot. Within a short period of time I shot my bull at 60 to 70 yards with my muzzleloader. A nice 5 by 5. He wasn’t huge but I didn’t care, the hunt was awesome and fun, full of mistakes but we still had success. I was with my nephew and we laughed when we had to walk back to get the packs with his camera that was going to film the hunt, we laughed about me going to the bathroom and thinking the bulls bugling was a person. It was a great hunt.

Thanks again to everyone that helped me feel confident enough to go and not miss my son’s football game. 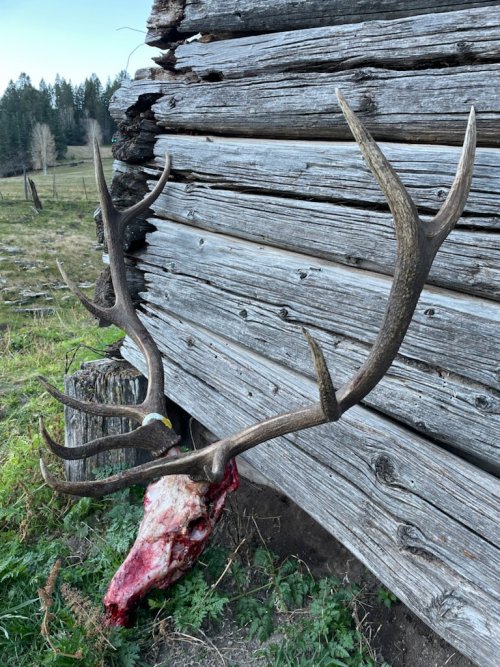 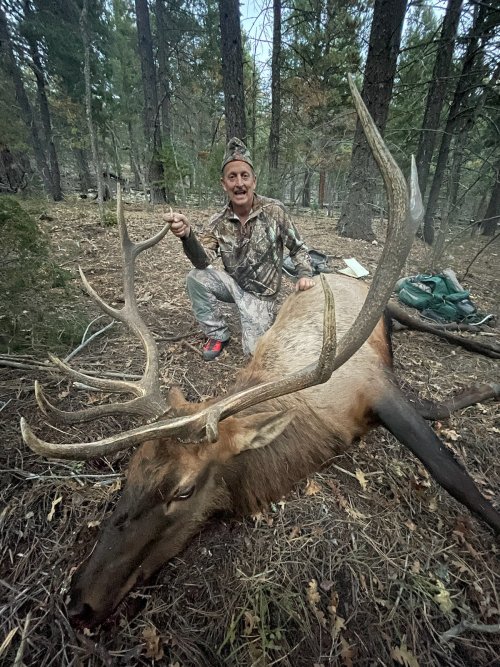 Great bull! Thanks for sharing the story. I always wind up wishing there were more hunting stories to read come the long offseason.
S

Congrats on the nice bull elk. Thanks for sharing your story with everyone. Elk hunting is so much fun and challenging.
E

Great story and a big congratulations on a beautiful elk.

Never leave your pack, sounds like a great hunt. nice bull
B

Congratulations on a great Bull.

Thanks I appreciate it.

Congratulations on your success.

Especially if it is a good camouflage match for the terrain and foliage where you are hunting.
S

OnX is a game changer in this , with the location markers you can pin drop on your phone , I’d be lost without it, figuratively speaking.

Congrats! TFS
You must log in or register to reply here.