Best of luck and safe travels! Can’t wait to read about the success!
B 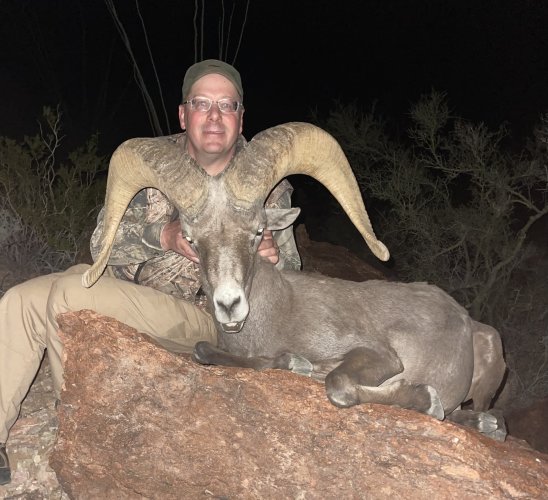 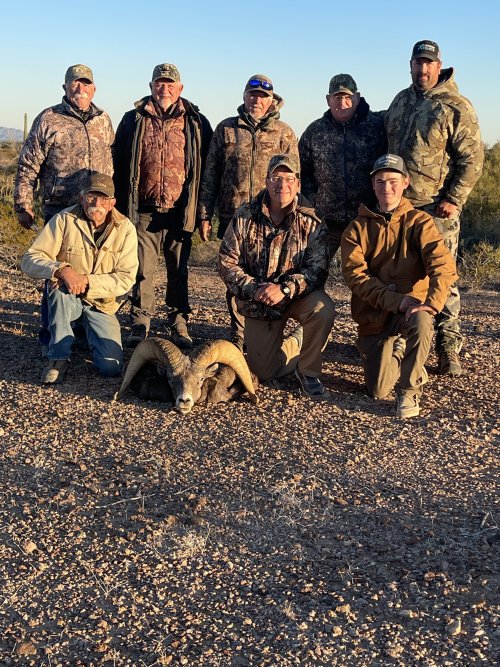 The whole basecamp team that worked very hard and extremely well together. Great group of guys. One friend in this group applied for 49 years straight and finally drew and killed an Arizona sheep last year at 79 yoa. That’s dedication!

I will write a hunt report with a few conservation notes from my previous notes and research when I get back to the Midwest. Happy New Year 2023! 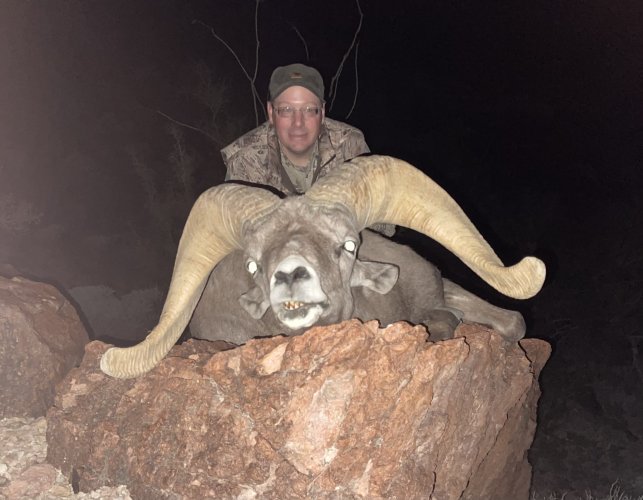 A short thanks to all of the different organizations and their members that directly and indirectly support conservation, hunting, fishing, and the outdoors. God please continue to bless America, TheGrayRider!
Last edited: Dec 17, 2022

Congrats on your ram!

Congrats! Heck of a ram!

Awesome! Congrats on your ram. Sounds like it was a special experience. Looking forward to reading more.
F

Congrats on a great ram! Looks like you had a good bunch of guys with you.

Looking forward to the recap. That ram looks incredible and agreed big thanks to all the conservation orgs making hunts like this possible

good job. Thats one hell of a ram.

Nice ram! Bet that feller kneeling down to the left of the ram can out hike most of the rest of the crew?

Love the pics...hope their's a story to follow!
Congratulations.

Tapping into lots of advanced experience with the crew, so it appears.

Congrats on a wonderful ram! I'll be keeping an eye out for the story.

Congratulations on a trophy of a lifetime.

Congratulations! I seen a picture of your ram posted on Instagram. Nothing is better than chasing desert bighorns. I take it you drew as a nr ?

As promised, here is a brief hunt report and miscellaneous notes that I researched before my desert bighorn sheep (DBHS) hunt. Bottom line: I am so blessed, grateful, and thankful to have the opportunity to hunt desert bighorn sheep and any big game in my lifetime. Lifelong goal accomplished. Never, ever quit. I appreciate the mountain hunts and don't take them lightly. I have been on a previous 10 day dahl sheep hunt where I did not load a round, which was a reality check and a bitter pill to swallow. Success is never guaranteed but just keep going. Don't ever give up and always stay positive. Thanks again to all.

“A dream does not become reality through magic; it takes sweat, determination, and hard work.” Colin Powell.

Disclaimer: The notes and quotes are simply to encourage people to continue to support conservation, hunting, fishing, and the outdoors. Collectively, everyone, in any capacity, helps out and makes a difference. Some of the data may be be outdated and some of the organizations may contribute more of their bottom line to conservation than others. I get that and would prefer not to debate or argue those points. I am just offering through these points my sincere gratitude, appreciation, and thankfulness to all over the decades that have made and make these opportunities available to sportsmen and outdoorsmen.

Brief hunt report: 5 days of hunting with Sundowner Guide Service, LLC of Arizona on the Kofa National Wildlife Refuge, south of Quartzsite in Unit 45C. Please give them a call for elk, bighorn sheep, mountain lion, black bear, antelope, and mule deer hunts. Great group of guys who have hunted these areas for almost 50 years. 7 mm Remington magnum, 140 grain factory ammunition. Shot under 100 yards from above rams. Score: I don't measure the success of a hunt with a tape measure. Same points we always read: Train, train, train before your hunt with a heavy backpack. Get in the best shape possible. Shot your rifles extensively. Enjoy the moment and have fun. Don't attempt to guide your guide. Trust them, they are the professionals. I would recommend going on a auodad/barbary sheep hunt in Texas or New Mexico, if possible. My barbary sheep hunt, years earlier, was extremely similar to the DBHS hunt over very similar terrain. I thought the barbary sheep were harder to spot actually than the desert bighorns. No white rump on the barbary sheep. I think Texas still offers year round hunting for barbary sheep on an exotic license without a draw on private lands. The barbary sheep hunts were also much more economical.

“One cannot run from a challenge without losing. To flee is signing a death warrant to dignity and character, and having run, there is no return; one is a weakling forever. Meeting a challenge, though one may be defeated, gives strength, character, and a certain assurance regardless of the outcome, one will survive or go down fighting.” Sigurd F. Olson

3. Totally protected by the Arizona Territorial Legislature in 1893, bighorn sheep were not legal game until 1953, when limited hunting of trophy rams was allowed (“…as the only way to save them…”)

7. The U.S. Fish and Wildlife Service estimates that there are more than 10 million big game hunters in the US, but only approximately 2,500 hunters get to pursue wild sheep each year. New York Times article, 2/16/2017. The Ultimate Pursuit in Hunting: Wild Sheep.

9. In 1936, the Arizona Boy Scouts mounted a statewide campaign to save the bighorn sheep, leading to the creation of Kofa National Wildlife Refuge. The Scouts first became interested in the sheep through the efforts of Major Frederick Russell Burnham, the noted frontiersman turned conservationist who co-founded Scouting. Burnham observed that fewer than 150 of these sheep lived in the Arizona mountains. He called George F. Miller, then scout executive of the Boy Scout council headquartered in Phoenix, with a plan to save the sheep. A "save the bighorns" poster contest was started in schools throughout the state. Burnham provided prizes and appeared in store windows from one end of Arizona to the other. The contest-winning bighorn emblem was made into neckerchief slides for the 10,000 Boy Scouts, and talks and dramatizations were given at school assemblies and on radio. The National Wildlife Federation, the Izaak Walton League, and the Audubon Society joined the effort. In January 1939, over 1.5 million acres were set aside at Kofa and at Cabeza Prieta National Wildlife Refuge combined, and a civilian conservation corps side camp was set up to develop high mountain waterholes for the sheep. On April 2, 1939, Kofa National Wildlife Refuge was officially opened; Burnham gave the dedication speech. The desert bighorn sheep is now the official mascot for the Arizona Boy Scouts, and the number of sheep in these parks have increased substantially.

10. In 1974, Jack O’Connor wrote in Sheep and Sheep Hunting, “I think the prospect for the indefinite continuation of hunting of desert sheep is very bad, even in limited numbers available today.” Chapter 16, page 291. He also wrote, “I am extremely pessimistic about the future of the desert bighorn – and so are the biologist.” Ibid, page 294.

Thankfully, due to ongoing conservation efforts from the many state fish and wildlife agencies, numerous conservation organizations and their members and volunteers, Jack O'Connor was wrong. May the desert bighorn sheep and all other fish and wild game continue to flourish.

Just a heads up.