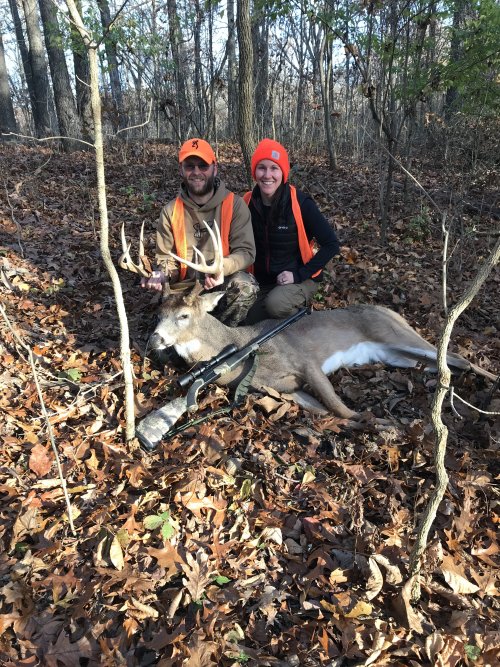 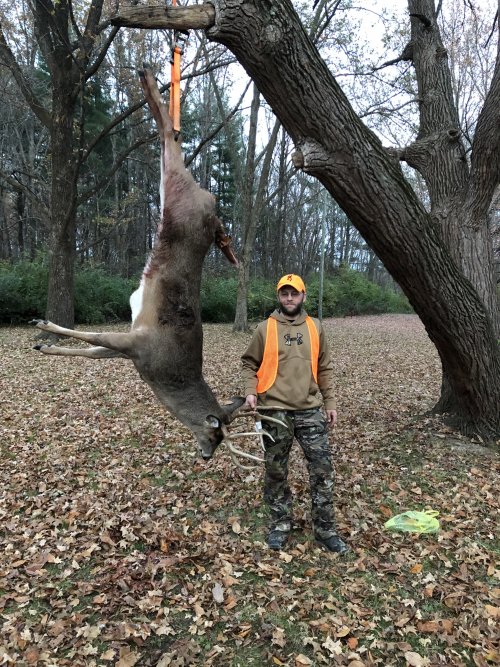 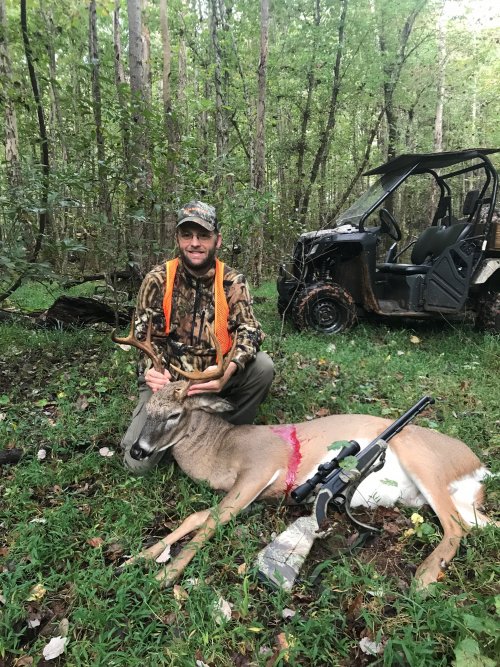 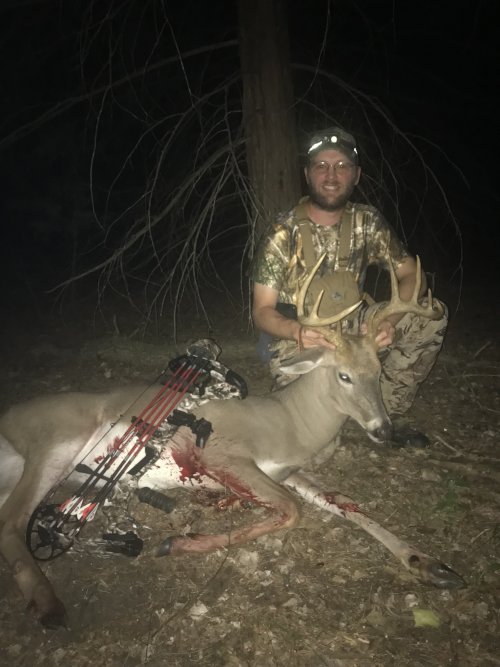 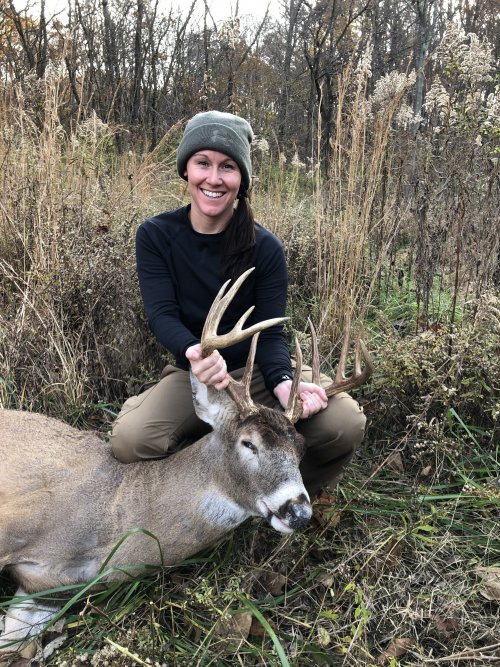 NICK87: Right on, 44mag Centennial
It is one sweet Lil rifle.

That's a great buck! It was nice to see you again, and meet your boys. Maybe we'll see you again in ten (10) years in the same unit???

Bozone said:
Headed out for a solo hunt last weekend. Good area with zero foot traffic (amazingly), and I had a big section of state land to myself. I bumped this buck still hunting into a stiff wind, and he was chasing a doe that walked within 30 yards of me. They looped out into thicker timber and she walked by again at about 40 yards, with him on her tail. He stopped to give me a broadside shot and that was that. 2.2 miles to the truck, two trips, and the cooler was full for the drive home.

Great buck and a great story! Congrats. Way to do it...on your own.

Big Slick said:
My youngest sons buck today. I’m sure he wishes he was bigger, but hey, he is happy. He has to get back to a pregnant wife and work. It’s been a great hunt thus far.
Click to expand...

Another real nice buck from your hunting party! My youngest would have liked a bigger buck too, but he's very happy that he tagged one.

Again, it was great to see you again.

That's a great buck! It was nice to see you again, and meet your boys. Maybe we'll see you again in ten (10) years in the same unit???
Click to expand...

Rich, it was seeing you guys as well. Meeting your sons was great. You guys did good on the deer, can’t wait to do it again.

This years yard buck compared to last years. Took a friends spawn out to sit with me behind the house this evening. The only pitcher I took of the deer on the ground has him in it (happy as can be, he loves hunting but he is a couple years young, his parents don’t hunt, and they let me bird hunt on their ranch, so…) and when it’s not my spawn, it’s not my place to post his pitcher on the multi web. 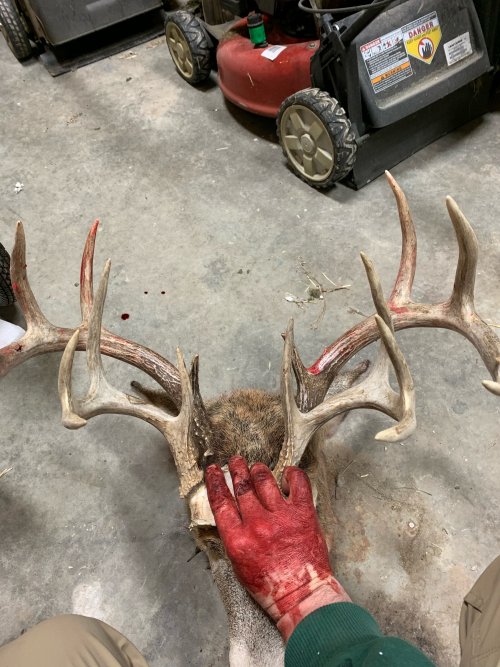 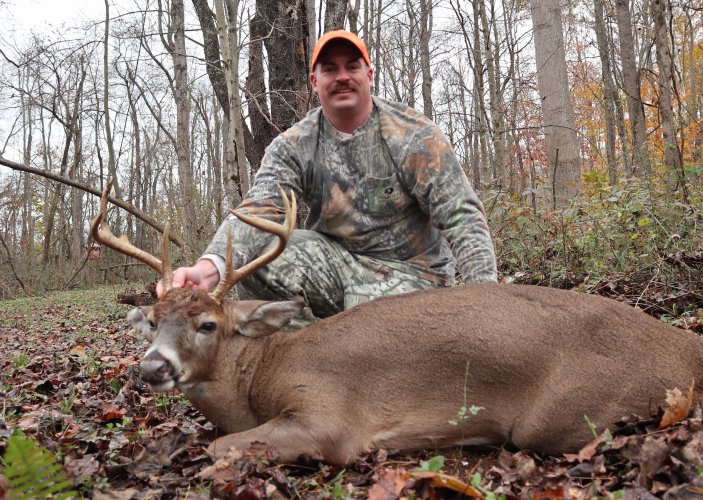 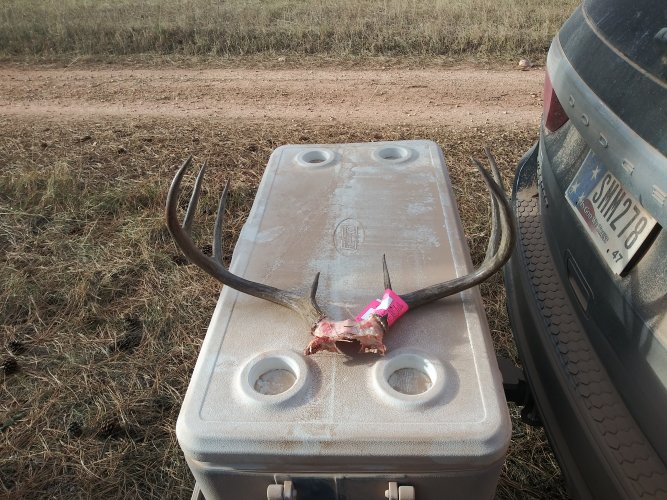 South Dakota - No in-the-field pics for this one unfortunately

Graduate school kept me from hunting as much as I wanted this year. I finished my thesis research in September, defended it in October, and spent most of November trying to publish a journal paper. Besides a weekend trip for antelope, Thanksgiving break was the first time I could dedicate to hunting this year.

I decided to go back to an old hunting spot that I hadn't been to in five years. It's an old burn area, and what used to be a forest of burnt snags is now a forest of 6-foot tall saplings. I began the morning creeping down a logging road. I had an entire basin to glass, and I failed to turn up a single animal. The logging road ended three miles in, and I started to bushwack. I began to wonder how far I was willing to pack an animal out. I crested a small ridge, and the next parallel ridge came into view. A deep-chested buck was raking a tree directly across from me on the top of the next ridge. He stood perpendicular to me, facing uphill. I knew this buck was big before I even looked at him with binoculars. I dropped to my stomach, took off my pack, chambered a round, and ranged the ridge he was on. 275 yards.

I raised up to my knees and found him again with my binos. I saw a muscular neck, a blunt roman nose, and he was staring at me. I pulled down my bipods, set up for a kneeling shot, and flicked off the safety. He turned and started moving downhill. He moved at a pace somewhere between a walk and a jog, more like a scamper. I think the downed trees and rough terrain slowed him down. I kept my crosshairs on his shoulder and squeezed off a shot. The rifle cracked, I heard an impact, and he bucked. I knew I made a good shot. He sprinted to the far side of the ridge, out of sight.

Just to make things interesting, I decided to make at least one mistake on this hunt. Between where I took the shot and the deer, I got completely disoriented in a thick grove of saplings, and I looked for the deer in the wrong area for a whole hour before I found the blood trail. I was even second-guessing my shot before I decided to grid search the entire draw. I located the blood trail over 100 yards from where I had been searching, and I found the buck 50 yards further.

This buck was a tank. Its body had the shape of a draft horse, and by its teeth, I saw that it was at least a 5-year old. They say only about 2% of bucks make it to 5 years old in hunted populations, and I feel fortunate to have crossed paths with one, especially because I had such little time to hunt this year. I butchered the buck, loaded him on my back, and started hiking back to the truck, 50 steps, and 10 deep breaths at a time. 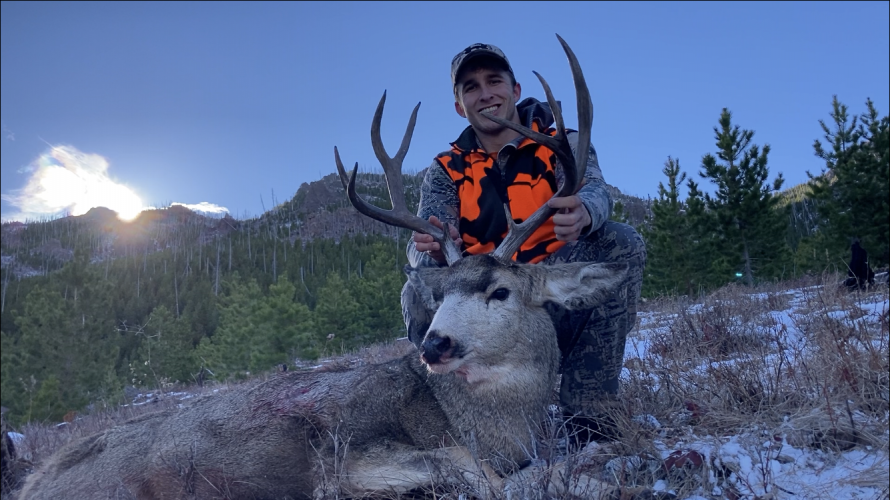 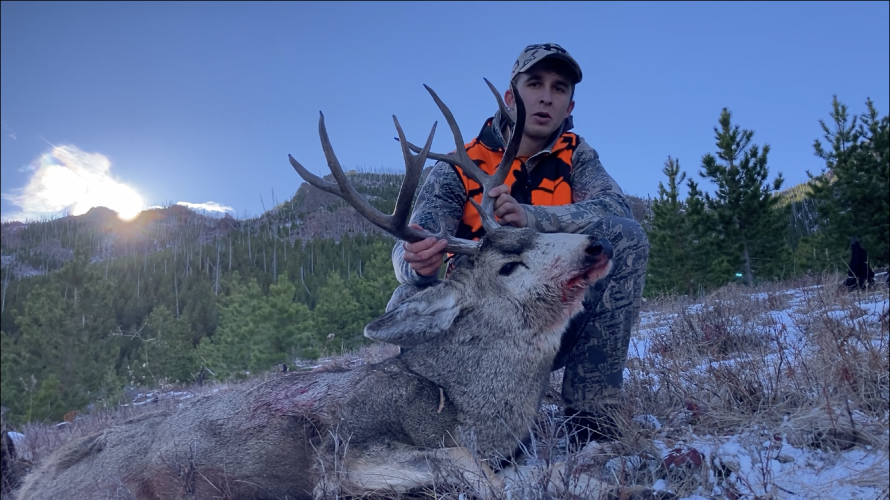 Shot this busted up 8 pt on 11/26/2021. Didn't realize at the time that besides his left side being damaged, his right side was almost gone. A scrapper for sure. Oh well, I got to break in the new Super Grade .264 Win. mag/Leupold VX-5HD combo. 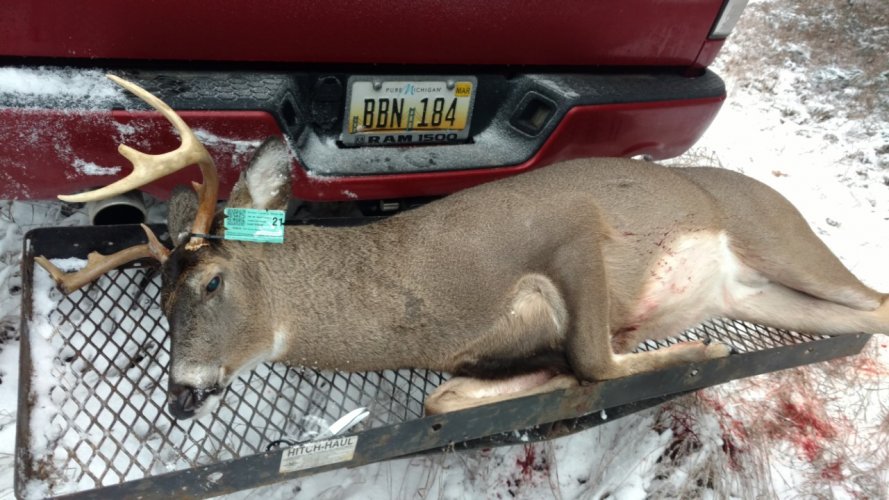 My wife and I pulled off a miracle stalk in the bottom of the 9th last night on this buck. This guy gave us the slip 3 times starting the previous evening. We had to sneak by a maze of deer for about a mile and she was able to make the shot count when he spooked and stopped to look back for a few seconds. She was also sick as a dog the last 2 days hunting. I was pretty proud of her even though she only let me have the biggest whitetail in the house for all of 3 days. 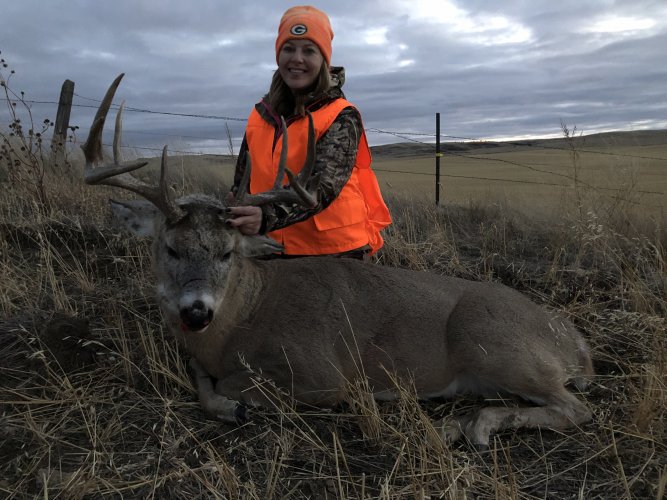 Check out our biggest Colorado Muley. We have only been hunting out west for about 3 years. Us Texans still have a lot to learn! lol

Idaho, October 17th, 2021. Shot this guy as he was feeding on the fringe of about 25 does, trying to get the rut started early I guess. 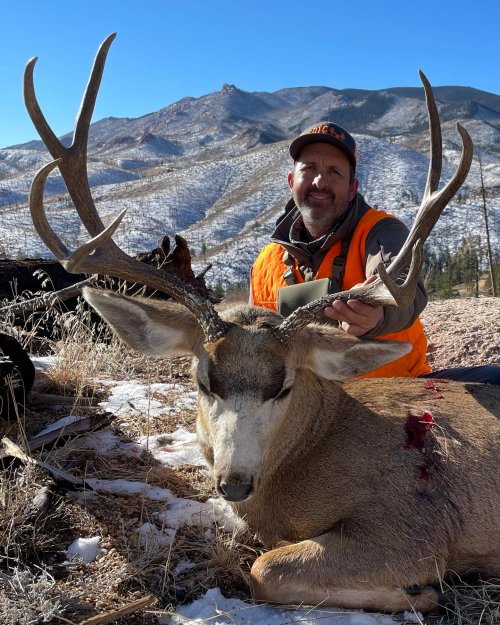 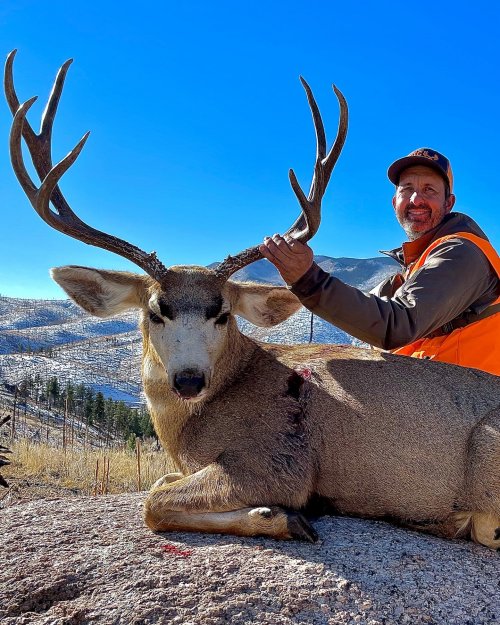 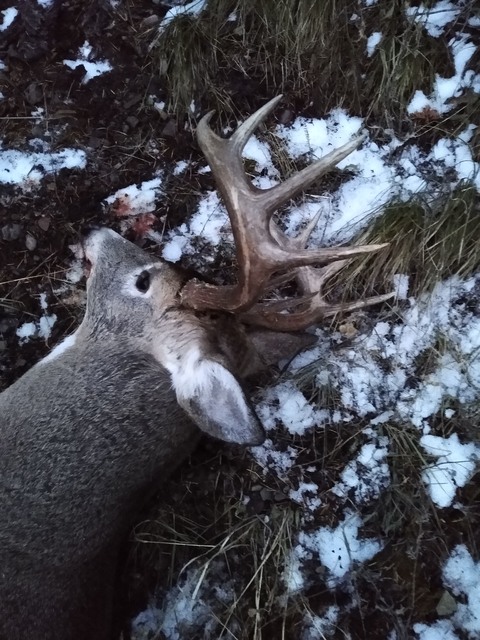 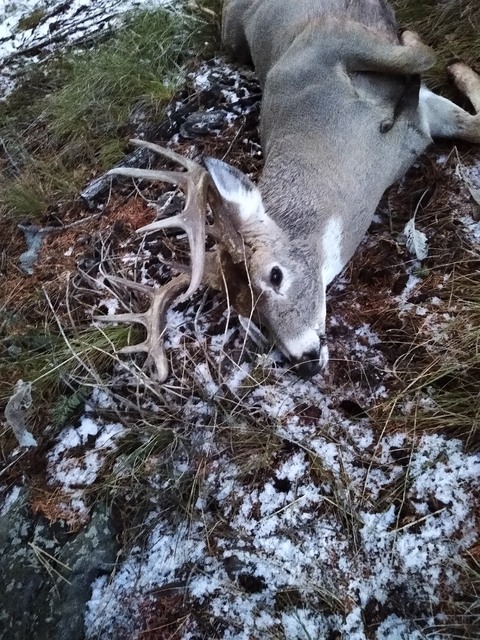 Bambistew said:
Lets see some deer pictures! I know there are some giant bucks hanging in garages, on walls, in the trash can... what ever. Post em up. The MT whitetail rut hunt thread go me reminiscing...

Here's a few bucks to start off. 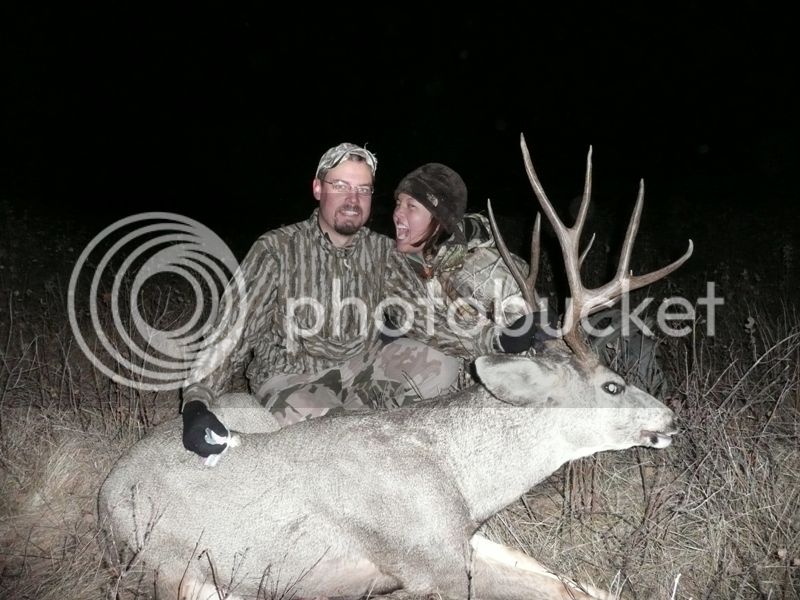 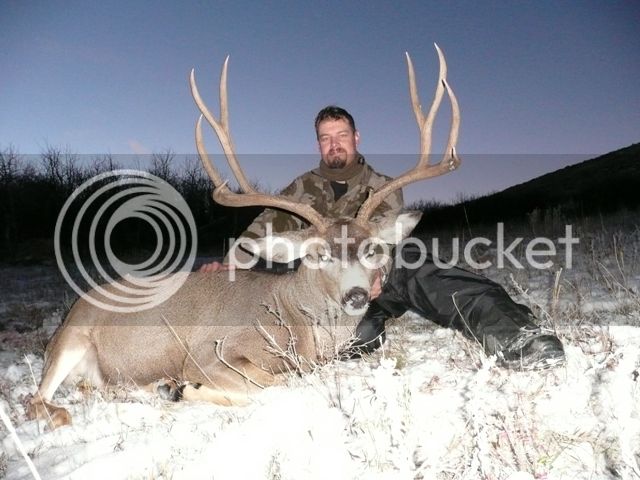 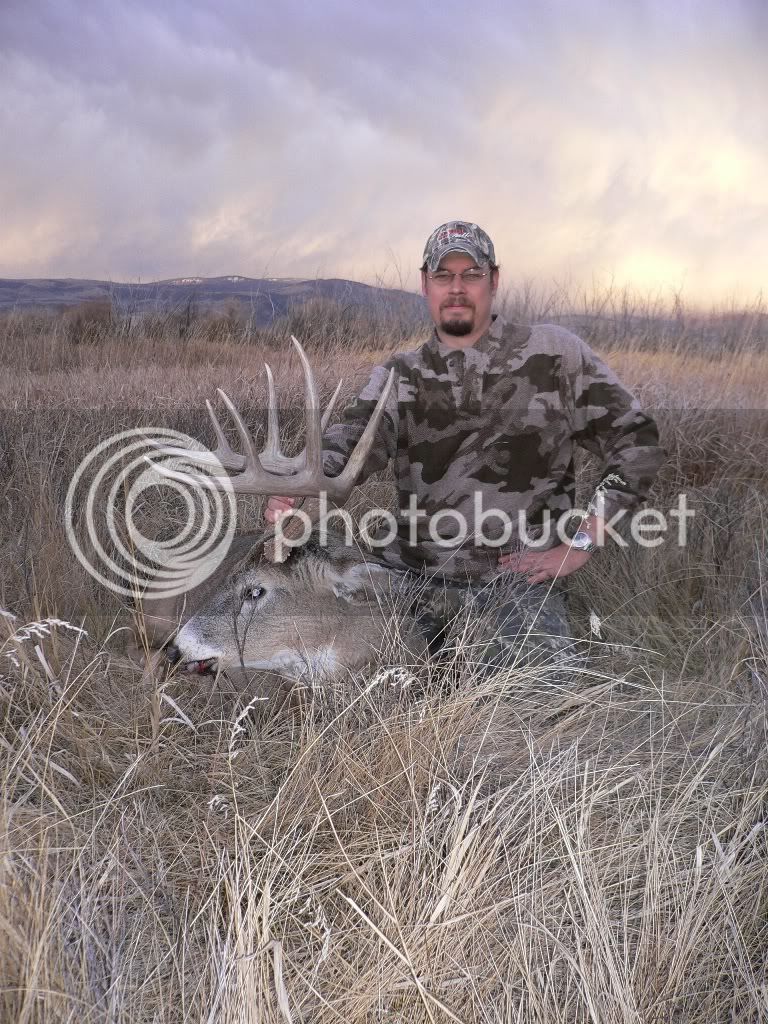 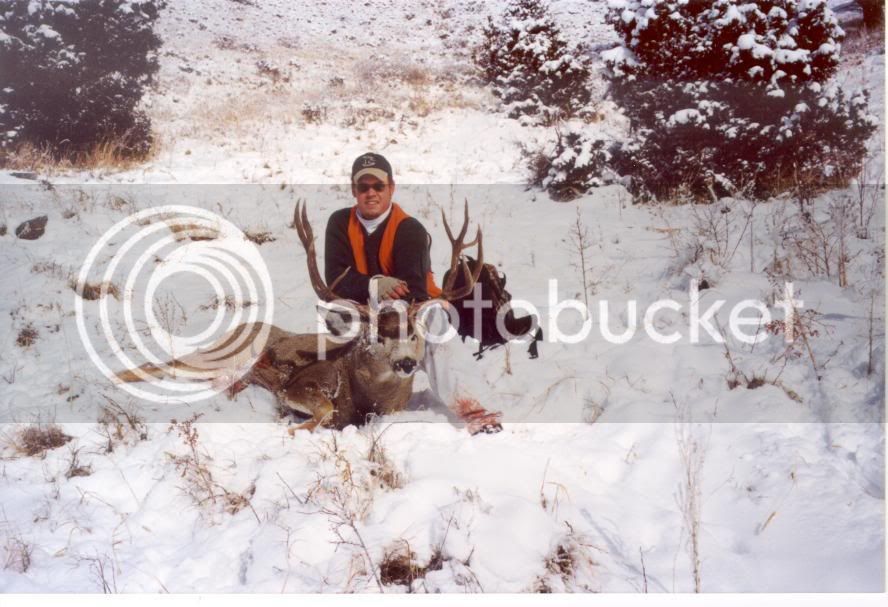 Palmated, bladed old AZ Coues! My first. Took him at 800 yards with a 6.5 PRC…and yes I tried my hardest to get closer but this opportunity presented itself and I was rock solid so took the shot. Happy I got to experience this with my Dad. He was quartering away and when I shot he flung his head back to see what it was, the end result was a bullet between the eyes.

Which week for MT whitetails on BMA?