Anyone have one? I want one of these in 7mm so bad I can taste it! Really just dreaming out loud! For now..

Not something you want to shoot for fun a bunch (in my opinion) but rifle is very accurate and a joy to carry weight-wise.

They also have a Cooper Timberline out that I am buying in 6.5 x 284. They look to be a very nice rifle as well.

That'll make three Coopers for me.

Fish, do you feel you get the true .5 moa out of yours? I have a custom rifle that is a same hole gun, but the complete package weighs 14.5 lbs and I only carry it on my pack. I've spent a pile of money on lightweight gear, and I need to get a lighter gun.

Hell, to be honest I don't know. The rifle shoots fine and probably better than I operate it.

After a few shots and the barrel heats up, it is not quite as accurate in my experience.

If you're looking for a incredibly accurate long range type rifle I don't believe this is the right rifle for you.

If you're looking for a lightweight, backpack type rifle that you can shoot pretty accurately out to 450 yards then I think this is a great rifle for that application and that is why I bought mine.

I didn't exactly answer what you're asking but I honestly am not sure of the answer and don't want to lead you astray on an expensive purchase.
Last edited: May 18, 2018
B

teamhoyt said:
Fish, do you feel you get the true .5 moa out of yours? I have a custom rifle that is a same hole gun, but the complete package weighs 14.5 lbs and I only carry it on my pack. I've spent a pile of money on lightweight gear, and I need to get a lighter gun.
Click to expand...

You can’t compare a 14 pound rifle to a 6 pound rifle and expect the same type of accuracy. With a little practice, I’d expect to shoot the Cooper 92 one MOA or slightly better, which is more than enough to kill animals.

I'd take a long look at the Seekins Havak. It's under 7* and is an amazing rifle.
A

I have a Cooper 92 in .280 AI, and it's been a challenging gun. Like Hoyt said, it's great to carry, and probably not the ideal gun for really tight groups out past 400-500 yards due to the weight of the rifle. If you have any flaws in your shooting technique, this gun will expose them as the slightest inconsistencies will have great impact in a gun this light. It has an excellent trigger, and I have a Leupold 4.5-14x44 VX3 on mine currently. My rifle has been very difficult to get sub-MOA, let alone anywhere close to the .5 MOA Cooper guarantees. The lack of factory ammo in .280 AI is the first limiter, but I've been reloading for a decade and have several guns from other makers that I've worked to sub .5 MOA rifles.

When I called Cooper to ask questions about the target that came with my rifle (which is one ragged hole, 3 shot group supposedly), they were very forthcoming with the data they had worked up for .280 AI. I was warned that due to the light nature of this rifle, the action screws can come loose over time, so make sure they don't move when you are shooting. Also, I was told that the .280 AI they have worked with in the 92's seems to prefer lighter for caliber bullets, which is odd considering the barrel is a 1-9" twist, perfect for the 150-160 grain 7mm bullets. The most accurate load data they had was using RL19, 52 grains with a 139gr Hornady GMX, which I found to be useless and frankly absurd for a .280 AI, far below any usable threshold for this caliber in any practical situation (performance much closer to a 7x57 Mauser or a slow .284 Winchester). This cartridge should be using 58-63 grains of RL19 for a 140gr bullet,depending on your rifle, and 52gr leaves behind hundreds of ft/sec of performance for a .280 AI.

I was hoping the data they came up with would produce a load much closer to the actual "hunting" performance of the caliber, but it seems they were focused soley on accuracy. I'm currently working through my 8th, 9th, and 10th different load ladder with this gun, and am nearing the point of concern where I am going to send it back to Cooper for evaluation. Nosler Trophy Grade 140gr Accubond ammo isn't consistent enough to hit a 24" square plate at 400 with two shots in this gun currently, and is somewhere in the neighborhood of 1.8-2 MOA at 100yds, very disappointing for a gun and ammo that are both carrying sterling accuracy reputations.

I've spoken to several other people who have 92's (7mm Rem, 6.5-284, .300 Win) and have heard promising things from many of them. I'm curious if mine is an outlier, but several other guys have been able to find very accurate and functioning handloads for their 92's so I'll keep working for now.
I

I have 4 coopers. M52 M54 M22 M22ML. All are accurate when you hit the right load. They will out shoot me every day of the week. The M92 is a different beast because of its weight. As Adam has said, to be accurate at longer ranges youneed to be a technicly sound shooter. I wont get into caliber choices but pick something thats comfotable to shoot.
A

I have the 92 in 300 win mag. I worked up a few loads and found one that shoots as good as I'm capable of shooting. I'm shooting 180 gr barnes tsx with 70.5 grains of IMR 4831. Shot a three shot group yesterday at 200 with the first two same hole and the third was cutting that hole just a bit to the right. That was laying prone using a bipod and a rear bag to replicate possible field conditions rather than shooting off a bench with bags. Im very happy with my setup. 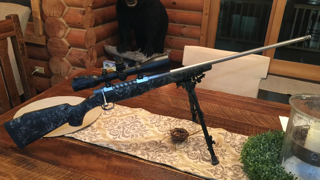 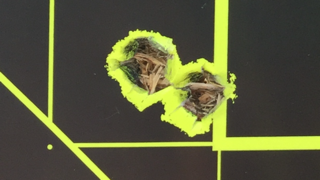 adubs said:
I have the 92 in 300 win mag. I worked up a few loads and found one that shoots as good as I'm capable of shooting. I'm shooting 180 gr barnes tsx with 70.5 grains of IMR 4831. Shot a three shot group yesterday at 200 with the first two same hole and the third was cutting that hole just a bit to the right. That was laying prone using a bipod and a rear bag to replicate possible field conditions rather than shooting off a bench with bags. Im very happy with my setup. View attachment 83474 View attachment 83475
Click to expand...

Adubs, I recently got a backcountry 300wm. I would like to shoot the Barnes 180gr ttsx like you discussed. What COAL did you load those bullets?

I have a 92 in 7mm and yes, it’s a sub moa gun. In my opinion, the brake does a great job of reducing recoil. As others have said, it doesn’t take many shots for the barrel to heat and your groups to walk. Luckily in most hunting scenarios, that’s not an issue. The key to this gun is finding the ammo it likes and getting plenty of practice to get used to, and comfortable with the gun. The top 3 factory bullets I found it likes, are Barnes, Berger, and Hornady eldx’s all in the 160 range. My buddy has the same rifle and has had the same results. Both guns have made solid kills from 100-500 with zero issues.
H

Outlaw, I have a backcountry in 300wm. Can’t get it to zero to save my life. Have even alternated shooters and used lighter loads with no luck. Also tried the recommend loads. Any ideas on what could be going on?

Have you checked all your action screws? My buddy ran into a similar issue. Ended up being the bases that came with the rifle were loose. Ended up pulling the screws out of both his and mine, cleaning the factory oil off, and locktite them back in.
H

Thanks for the quick response. I have looked at scope and seems tight but have not adjusted bases. Here are some targets i shot. The bad ones are my 300wm and the good one is my 7mm. I can’t move the scope with my hands. You think I should take scope bases and rings off and retighten?

It sucks, but I’d definitely get those screws pulled and cleaned, locktite, and retorqued, if nothing else, for your own piece of mind. A couple other things; this rifle will walk with a hot barrel, so it’s important to give it a little time in between shots. Also, have you tried a variety of factory ammo with the same results? I know it’s all hard to come by, but i tried a lot of factory ammo and the 3 I listed were hands down a lot tighter than anything else.
H

Have not found any factory ammo but was going to order some from Choice Ammo. I will take scope and bases off and remount. Am tempted to send back to Cooper. It’s been really disappointing.
H

I sent rifle back to Cooper and they said the stock was broken near the recoil lug and that is why it wouldn’t shoot. Have you guys heard of this happening before?
You must log in or register to reply here.