The first evening of hunting our lodge owner arrived with a client who had taken a rhino at another property. By “taken” I mean the client darted and tagged it which was sufficient to finish up his “Big Five Dangerous Game”: lion, leopard, cape buffalo, elephant, rhino. Bright and early the second day six of us were out looking for the group of four buffalo bulls containing the designated bad boy I was to shoot. Glen, our tracker, myself, the lodge owner, and his client were in one vehicle and the farm owner was in another. We split up to search both ends of the property. Game was everywhere. At a water hole we drove into a large herd of buffalo cows, calves, and soft boss bulls. The herd bull was magnificent but of course off limits. The owner spotted the previous day's herd of seven bachelor bulls, now expanded to eleven, but my guy was nowhere to be found. After lunch we drove to a koppi (rugged hill) at the end of the property to glass the surrounding terrain. This particular kopi has historical significance. It was the site of a major battle during the Second Boer War that resulted in the British being severely thrashed. On top of the ridge, fortifications erected by the Boer defenders are still apparent. 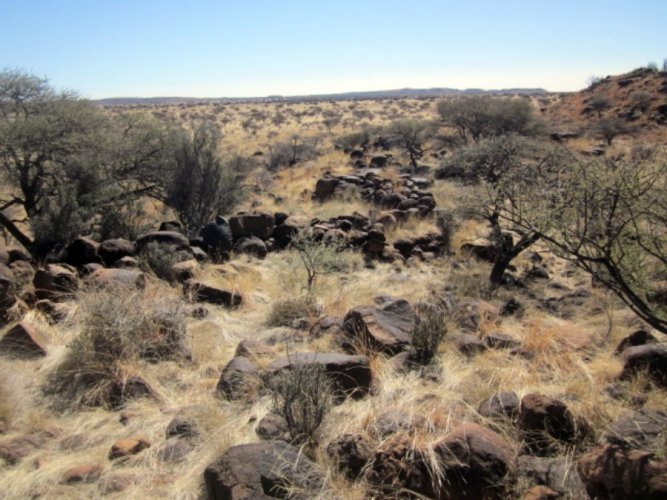 The key to the Boer victory was deciding not to use the fortifications. An ingenious tactic. Actually, I think the key to their victory was the British defeating themselves, which was not uncommon. It’s a long story. Anyway, we took our positions and watched and waited. Before long the lodge owner’s tracker spotted something in the thick brush at the foot of the kopi below us. Though only glimpsed briefly, he seemed fairly certain it was a buffalo. He continued watching the spot while the rest of us drove around checking the various water holes. About an hour before dusk the tracker called on the radio; two buffalo bulls were moving where he’d seen the one earlier. We hurried back and started the stalk but the thicket was nearly impenetrable. At one point we were within thirty yards when the two bulls bolted. I could just barely see the tops of their backs as they ran by. Nothing to shoot at. We played cat and mouse with them for another forty minutes before giving up in waning light.

The next morning before the lodge owner left for home base in the East Cape he took me aside. He told us about a whopper bull on the rhino property that was available to hunt if we couldn’t close the deal on this one. Glen and I decided to give the buffalo a rest that morning to see if my bull would settle down. We went sable hunting instead. Again, two vehicles scouted for the designated animal. The owner wanted a particular sable bull culled that never fully matured. It had a distinctively small body and though its horns were nice enough, they weren’t enormous as they should have been for an animal its age. The other bulls were making life hard for him. We found a group of cows and then four very nice bulls but not the right one. Finally, when returning to the ranch complex for lunch, Glen spotted two sable bulls in the open about five hundred yards from our vehicle. One was noticeably smaller and the other was a real beauty, probably +46". We parked in some cover and started the stalk. Fortunately, there was almost a straight line of acacia shrubs between us and the bulls. We leapfrogged from bush to bush till we were within 100 yards. Glen set up the sticks and I waited for the grazing bulls to walk out from behind cover. First to appear was the big boy. I scoped him with the 3x9 Leopold on the lodge’s CZ 550 30-06. When the smaller sable finally stepped into the clear I was ready. Waited for Glen to make sure it was the correct animal but the dang thing wouldn’t lift his head. Then he turned his butt to us. Glen finally gave the okay but I had to wait for a broadside. Meantime, the bulls started to walk away. They went about 25 yards before the smaller bull finally turned left. Bang! “You got him!” Both sable took off but mine didn’t go far before stopping. He was done. Shot in the boiler room. We closed to fifty yards and I finished him with a neck shot. 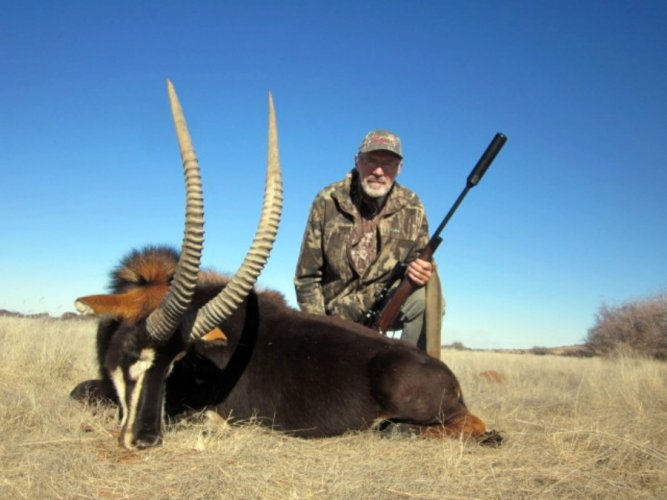 After dropping the sable off at the ranch’s processing barn and eating lunch, we went looking for the buffalo bull. All afternoon we searched but no one could find him. Finally, about an hour before dusk as we were cruising a “track” (bush road) on the south end of the hunting property, Glen saw the big bull by himself just around a blind corner not a hundred yards away. He was feeding and hadn’t noticed the truck, We backed up well out of sight and started the stalk. “Pat, you got this guy. He doesn’t know we’re here and the wind is perfect.” Silently the three of us approached on the track. Glen peeked around the bush on the corner, quickly set up the sticks, and motioned for me to come ahead and get the gun ready. But before I could get on the sticks a herd of six eland cows and calves busted to our left and ran down the track in front of us. My bull took off. Nuts! We ran in hot pursuit hoping to catch him crossing a large open plain as he headed for his favourite digs below the brushy koppi. I was right behind Glen when he suddenly stopped, threw up the sticks, and pushed me onto them. “There he is!” I was looking in the opening and couldn’t see a thing. Then up jumped the bull forty yards away! He had only run a short ways before laying down to hide in a big acacia bush. He was waiting to see what spooked the eland. As soon as the bull was up, he turned around and started running. No way would I take an ass shot. When we last saw that old boy he had put four hundred yards between us and was still going. Eventually he ran into a long shallow valley full of brush and didn’t come out the other side. The owner dropped us off at the south end and we worked our way up while he glassed from a small hill. About that time an evening breeze started blowing ... in the wrong direction! The bull must have winded us. Amazing how those big animals can simply dematerialize when they want to. While working our way up that draw we encountered another sad bit of history: two grave markers out in the middle of nowhere. What’s the story? The farm owner had no answer. The names of deceased on the marble headstones were erased by the elements long ago. 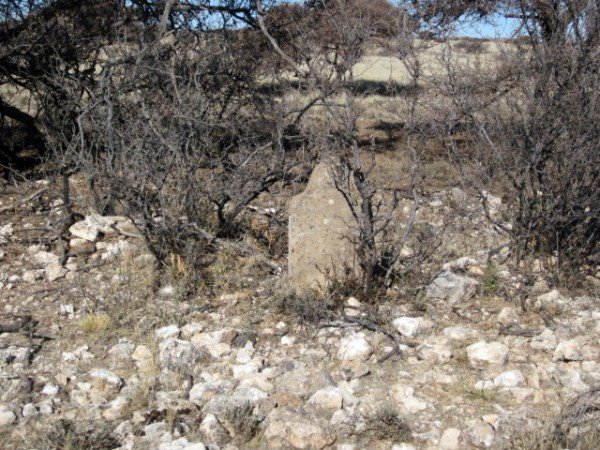