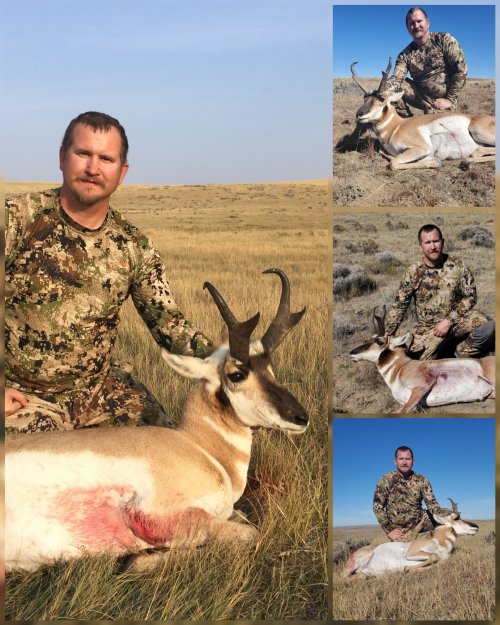 When I started filling out applications this year my expectations were low, a license in Montana and one in Wyoming. Montana continued to disappoint me, but Wyoming stepped up and granted me two. Then Idaho Fish & Game chose redemption after the license sales fiasco in December by choosing my lot for a Muzzleloader buck. And not to be outshined by another state wildlife agency, South Dakota GF&P called me just a few days prior to the season started and asked if I would like to hunt antelope in their allotted portion of western heaven. I immediately obliged and now had four pronghorn buck tags in my possession.

Closing the distance on a buck in Idaho sage scrub was not an easy task. My muzzleloader was green but I had spent enough time to become confident to a hundred yards. While glassing just outside my camp, a small buck appeared, being chased by the buck who was clearly asserting dominance in his territory. Using the broken rock and terrain I could only get to 150 yards. But then a doe appeared on the ridgeline, diverting their attention and bringing the larger buck up a small draw to 45 yards and within range of my .50cal Pedersoli traditional muzzleloader rifle.

Wyoming is the holy land of antelope and a pilgrimage is rewarded with the hunter's choice of buck and pursuit. The first buck gave me the slip in the morning, but by noon had returned and presented a modest 200 yard shot. My second buck was solitary, found in green, grassy bottom feeding away. A kneeling, off-hand shot at 140 yards was easily placed and the buck packed just a few dozen yards to the truck.

South Dakota presented a challenge that was slightly underestimated and required more effort than anticipated. With nearly no time to research the hunt, I focused on National Grasslands but finding few bucks. The plight of western drought coupled with a severe outbreak of EHD had already severely subtracted the herd. Hunting pressure was intense and my only shot was missed due to an ill-performing range finder. An empty handed return home to Montana weighed on me too much and I was compelled to try again. I made the 800 mile trip in one day and managed to find just 5 bucks, all smaller, in almost 300 head of antelope and two days of searching. With the final two days of the season left, I spotted a dozen that required a careful plan of approach. A low crouch became a low crawl of about 400 yards total. My shot was rushed, but effective, and I my last tag was filled.


I find it impossible to not stop and admire antelope wherever they are. My favorite game to eat, there is nothing that compares its tenderness and sweet taste. More than filling a tag, filling my freezer with antelope meat made these licenses the season's priorities. Each one had its own unique challenges, differing from each other in a way that only antelope hunting can span. I treasure each one as I see their decline around the western range. I'd encourage any hunter wanting their own antelope adventure to not wait long.​
S

Dang looks like a fun year. I sure like antelope hunting the once in a blue moon I get to go
H

Congrats - quite the fall!!
E

Sounds like a great season, spanning across multiple states congrats to you!

Awesome job and even more impressive all in one season! I took my first Antelope in Montana this year and hope to take one in Wyoming and South Dakota one day as well.

That is a heck of a year. Hearing @Big Fin talk about Pronghorn hunting, I guarantee you he was envious of your draw luck! Great job!
You must log in or register to reply here.

Picked up my 4th Antelope buck tag this year

B
Border to Border: Bucks in the Summer, Fall, Winter, and the Monsoon
2 3