A deer hanging in camp

Congratulations on a great hunt and comfortable camp. Hopefully there will be many more in the coming years.

Hunting is not all about trophies. It seems like we lose our focus on what is really important. My dad took me hunting for the first time in 1965. I shot a doe and was so excited, I couldn't contain myself.

37 years later at the age of 92, he shot his last deer. 3 generations of hunting heritage, and passing it on is the most important thing.. 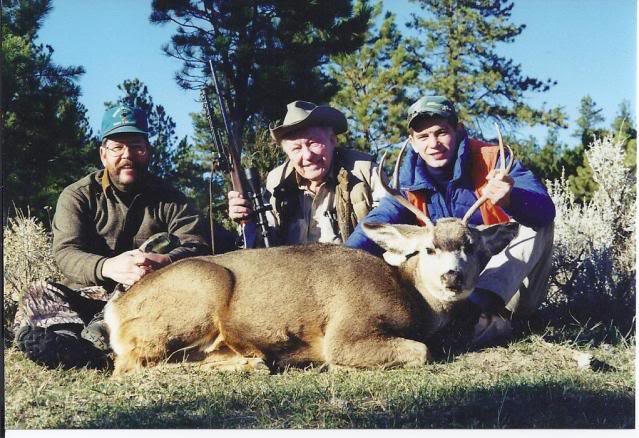 Amazing hunt. I was/am an adult onset hunter back in 1993 at the age of 19. I have since passed my love of it down to our 4 daughters. Hopefully some day they take the old man out and let me sit with one of my model 70's.

A hunt to be cherished, I enjoy this type of hunt above all others. Thank you for sharing.
R

yes it was a nice hunting trip my son has had some health issues himself im very proud of what he has accomplished in life. this picture is from lion hunt this last winter

Gonna be pretty hard to beat that! Nice job to you both.
J

mevertsen said:
My dad has had two strokes. 2016 and 2018. The 2018 one did him in pretty good and the last couple years have been rough. He is now retired and life is a little better.

He hasn't been hunting in several years. He bought a Howa 243 last year, and we put him in for tags this year.

He drew a doe tag for area 6 here in NV this year.

We left Sunday and arrived at our camp spot at about 430. I put up the wall tent real fast, and my dad wanted to go down the road and see what was up and moving.

We made it just out of the hole camp was in and found some deer. He was lined up on a fawn, and passed. We then went 100 yards down the road and there was a group of about 15. It took a couple minutes for him to get set up on the tripod, but his one shot held true. I watched the deer fold up in my binoculars at 75 yards. One shot and done.

I began to do the gutless method like I normally do, and my dad said he wants a deer hanging in camp, so I gutted it real quick, and we hung it in camp.

He was shooting 243 Win with 95 grain Federal Nosler Ballistic Tip. In through the ribs, blew the heart up and out through the back of the left shoulder. The dark spot on the right side is the entrance and the one of it lying on the ground shows the exit.

We then goofed off the next couple days and came home yesterday. Cut up the deer last night.

This seemed to be more nostalgic for him going back to his childhood of big camps, wall tents, and deer hanging in camp.
Click to expand...

Great job. Cherish that memory, there's plenty of us on here that wishes we had one more memory to create. Thanks for sharing.

Thanks for sharing.
T

Well done ! You will remember that hunt forever. I'm sure your Dad enjoyed the hunt and the memories of many former camps that had game on the game pole.

Howdy. It is a shame that I didn't hunt more with my Dad after I graduated from high school. When I was a small youth, my dad used to go quail hunting using a couple of pointers he had. I wanted to take him on a guided quail hunt sometime as I got older. But, time got away and I didn't. Now Dad is still with me, but at 92 he isn't going hunting anymore. :-( Good move there mevertsen !!!!!
J

Miss hunting with my old man, congratulations.
You must log in or register to reply here.

Monday at 8:29 AM
CRAZYCARL