SaskHunter said:
As a volunteer firefighter and soldier, today I climbed 110 flights of stairs in remembrance to those who fell that day and in the years since. For those hardcore mother f'ers who climbed in full bunker with extra air tanks and hose lines, rushing up 110 floors to save their fellow man and for all of those who have died in the subsequent war on terror trying to liberate a country from evil.
Click to expand...

Though you’re our neighbor to the north, I still thank you for your service and commitment. Important to keep the memory of ALL those lost alive.

My future son in law, on the left, after his 110 floor climb. He is a full time fireman in the Dallas area and has participated every year since joining up! Thanks again Sask 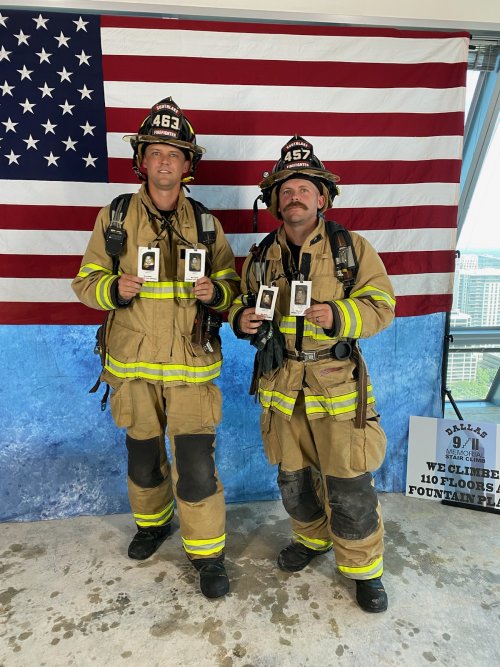 MarvB said:
Though you’re our neighbor to the north, I still thank you for your service and commitment. Important to keep the memory of ALL those lost alive.

My future son in law, on the left, after his 110 floor climb. He is a full time fireman in the Dallas area and has participated every year since joining up! Thanks again Sask

We have a good memorial climb here in San Antonio also, at the Tower of the Americas, good stuff
N

I was stationed at Fort Wainwright, AK and on leave moose hunting with my parents. I had no idea what was happening.

they shepherded a chunk of us into the gym so we could huddle around the little 28" TV on that big roller cart. i think they had others on elsewhere for the other students. apparently our principal had the foresight that this is history and shouldn't shelter us from seeing it.

then i remember my teacher crying in front of all us kids in class some weeks or months later when she learned her army ranger husband was going to be deployed
Click to expand...

I was in sixth grade, I remember teachers crying most of the day. My grandma picked me up and was complaining that all that was on the radio was the news...when I got home, I turned on CBS to watch a recap of the events, and can still see Dan Rather crying on TV.

I was in the back country of Bridger-Teton Wilderness w/ USFS conducting inspections of Outfitter/private sites for griz compliance (8 day inspection treks). We received the radio call to return asap. Apparently, at the time, we received the call it was a precautionary due to the unknown status of the threat. Only six years earlier, we had the Oklahoma City domestic T attack.

I was at my mothers. She attempted suicide on the 7th. The two events at the same time were pretty tough to take.
2

I was on the water working on the other end of Long Island. Had no idea other than very odd traffic on the marine radio. Coworker backed the truck to the boat ramp and got out to tell me the news.

Painful memories for so many.

RobG said:
I was at my mothers. She attempted suicide on the 7th. The two events at the same time were pretty tough to take.
Click to expand...

Sorry to hear that.
R

It was Sep 12th for me. I was stationed at Camp Casey, S. Korea and my roommate woke me up, telling me a plane just hit a building. I thought he meant there in S. Korea. I got out of bed as he clarified and walked toward the common room where there was a big screen T.V.

As I waked into the room I saw the second plane hit the tower. We sat in silence, everyone had a gut wrenching nausea as we saw people jumping off the buildings. The one person I vividly remember was a lady who was holding her skirt down as she fell. Before anyone told us to do anything, we all started gearing up and heading towards our company area.

In western Pennsylvania working (landscaping). The homeowner came outside and told us what had happened. My crew and I spent a couple hours in the homeowner's house watching the news. We tried to get some work done, but it was very eerie outside and no planes or traffic. The house was on a golf course that was void of players. We all went home to our families.

Working on the roof of a new construction project. Mrs. bearfoot called to relay, that her mother said the towers came down. I said no-way. My mom worked on the 49th floor of the Empire State Building when it was hit by a small plane many moons ago. Took out a couple of offices. The whole thing unbelievable! Noticed no plane flying that day, very unusual for Wasilla, AK.

I was in 9th grade English class. I watched the second plane hit and the towers fall live. I was shocked. Even at 14 years old, I knew I was witnessing a JFK assassination caliber event unfold before my eyes.
S

I was in the Gila MF hunting elk. I will never forget as we drove out of a 2 track and guys were waving us down at a camp asking us if we knew what happened the day before. We went to Reserve to get a meal and watched the TV for a couple hours and started to plan how we were going to get home since we flew and rented. We actually flew home the first day they opened the airports again. Sad day.
T

I was on vacation with my parents. from PA but we were in Vancouver BC, I don't remember if we were on the island or just a remote part outside the city woke up on the hotel room floor I think both towers were already down. drove around that day radio on a bit, and then a lot in silence. I was 13 at the time so didn't hit me as hard right off the bat since we weren't in an urban area with a lot of people for a few more days.

the meeting my dad was attending was interesting, he said a lot of the time was spent trying to figure out how to get everyone from other countries back home. we lucked out that when we got to the border the US Border Patrol agent went to a small college close to my uncle's in PA so he recognized my parents drivers licenses, made mention of his college, dad mentioned my uncle's town and we were let through.
H

I had just gotten into my uniform & was putting on my boots,getting ready for work.Turned on the weather and watched the 2nd plane hit.
At work no one had heard and they thought I was nuts when I said we were under attack. They always thought I was nuts...
The ranger station got a call & my job was to open the back road in the park and the gates between Camp San Luis and the Federal site on the other side. The NG would have a base and patrol along the NF boundary along the back of the base area and the park. I set up a mobile station with water on the road.
That night I got a message my Navy Chief had died in the Pentagon attack. We were the only 2 survivors of our boat crews.

The next week I was sent to patrol the lake side of a park behind the dam. Had a LEO in the boat with me the next 2 weeks. No one allowed near the dam.

I spent the next 10 years as a Lake Patrol Ranger/EMT at 2 large lake parks. I went from the maintenance/fix it guy to LEO.

2 years after the attacks I visited Arlington to pay my respects @ The Chiefs grave. I also visited The Wall and paid respects there, the WWII & other Memorial places in DC.

Freshman year in high school, Wood shop. My older brother was in the same class as a senior.
You must log in or register to reply here.