I better get the first hunt of the year going. I leave in 6 days, it’s going to be a mostly truck hunt unfortunately. This was a 3rd choice draw unit.

I started today with putting some goose in the brine for goose Jerky for this adventure and my CO pack goat deer hunt.
Matt 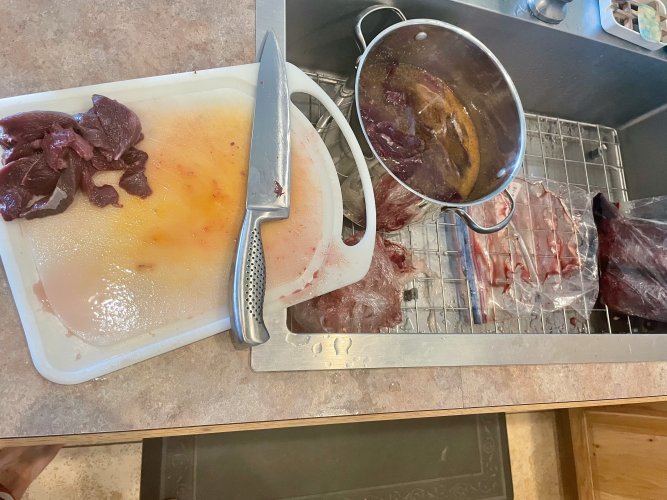 Goose Jerky, I've never had it. But I bet with the right brine and seasoning it's good. 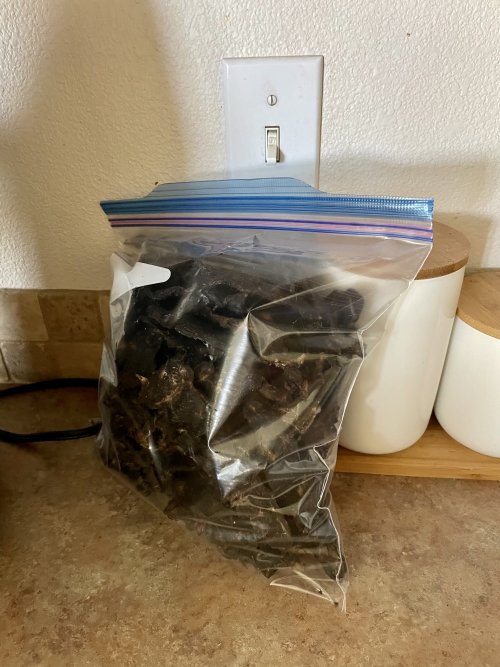 What unit do ya have?

Matt, i am getting there on 18th for couple days of scouting before rifle lope opener. If your still in Nevada then let me know what units if we match will gladly relay any glass info.

JohnCushman said:
I hope you're still planning on coming to my moose hunt in October
Click to expand...

Of coarse, waiting for gps location

And it begins!
Matt 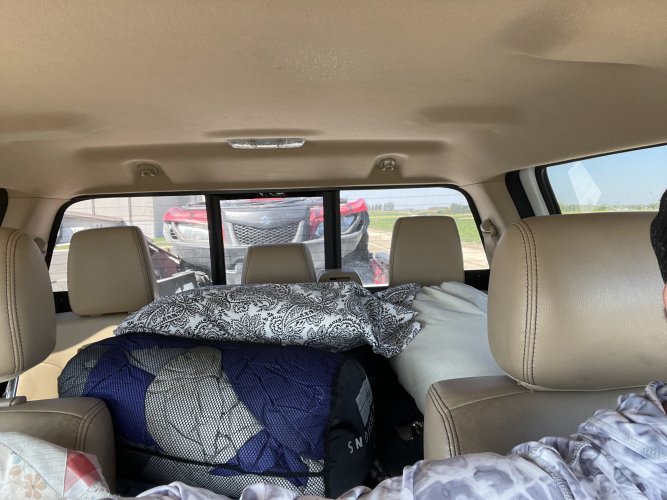 I was a little bit cranky all day today knowing I don't have an archery tag this year. I would have normally blown my first stalk of the year by now.

the drive down was interesting with the billions of Mormon Crickets

on the road!
Matt 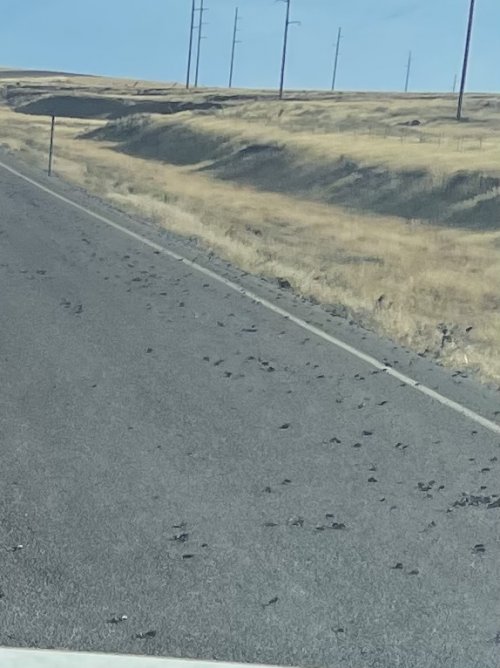 Evening 1 ended up not getting in as much scouting as I would have liked too. I did manage to find a few Doe’s and fawn’s which made me somewhat excited I had found deer already in a group of units I have never been too! The cooler weather and rain was awesome compared to all the triple digits here in sw Idaho.
Matt 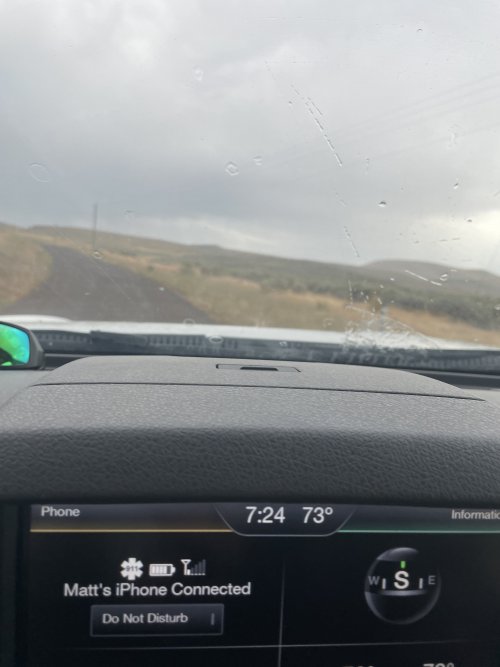 1st full day of scouting was productive but not productive. I was able to mark off a lot of country that looked good. And I’m sure they’re deer there. But I just wasn’t feeling those spots. I found lots of wild horses destroying winter range though! I did however find a nice crapper out in the middle of nowhere and had a nice relaxing afternoon with clouds and a cool breeze. That afternoon I used that time to move to plan B spot. Which ended up being a good move. Ran into 2 hunters there from CA that we’re camped in plan B-1 spot, went to
Plan B-2 spot, set up the spotting scope and cooked up one of those awesome breakfast burritos I had made. I did spot a buck way up in an alpine basin! Being 4+ miles away it’s hard to tell in my glass how big it was. I left that spot to go check a few others out, right after I left that spot I met a guy on the road driving in (Roger) he is the biologist for the mines and a couple of the big ranches. Very nice guy, he told me where he was camped and to find out it’s about 50 yards from where I had planned to camp that night. I followed him back and I set up camp as did he. We chatted for an hour or so. Told me if I had found a buck that I should probably kill it opening morning since this particular area has a decent amount of pressure. I had noticed since it’s a Tuesday and already came across 4 groups of hunters. Plan was set for the morning, get up try to relocate that buck and move in close!
Matt 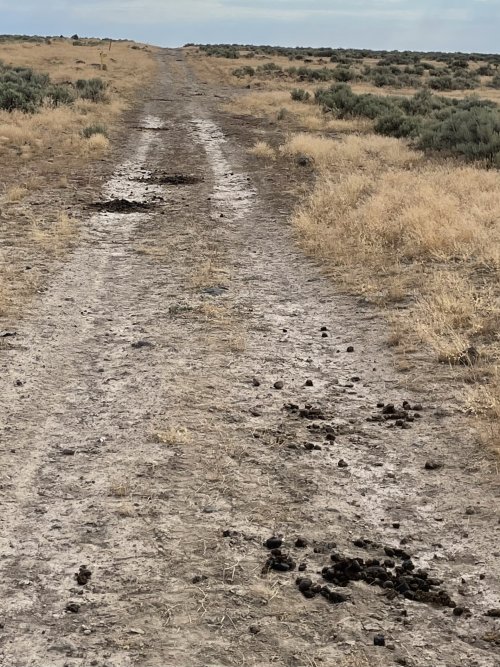 Horse crap covered most of the roads!

This herd had roughly 24 in it. I have 1 horse at home, I can’t imagine how much winter range those 24 destroy! 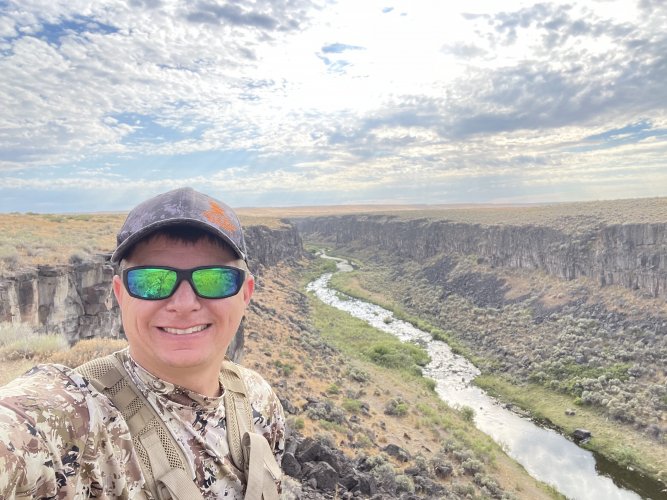 One of the awesome canyons in Nevada! 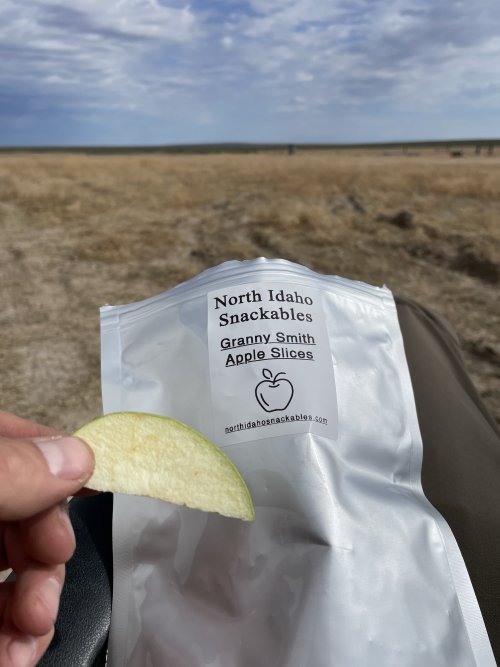 Lunch break! I think these are my new all time favorite snack! 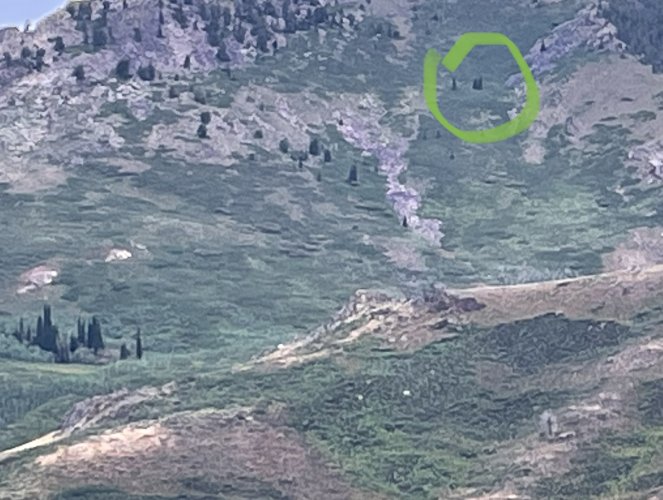 This is the basin I found the buck in!

So opening morning found me at a different location to look into that basin I found the buck from the evening before. Turns out there was 3 deer now. So I made a plan to get within about a mile or so and hike in there. This was 7:30am, by the time I got to where I could see them again it was 9am. Turns out there are 5 deer now. One decent four-point, 3 point, a two point, a spike, and a doe.(see short vid 1). They moved up and over the ridge, I naturally pursued them. I eased over the ridge to find a very steep slope on the other side. It was all open until the willow thicket in the bottom. I made the assumption that they moved horizontally on the mountain, so I stayed up higher than their line of travel and proceeded horizontally on the ridge to east patch of timber that I thought they may bed in. Turns out they did not laydown, I moved into the timber and sat down to glass and I spotted seven deer directly below me about 140 yards in a pine thicket. (see vid 2) it was so steep that I could not get any closer, so I sat there and watched to see what they would do. When was perfect blowing uphill slightly occasionally switching and going down the ridge in the direction that I came. As you can see in vid 2 They moved out of the thicket and it into the willow bottom. They seemed spooked, but I knew it was not from me. I eventually fed up the other side of the cannon and then something spooked him out from the bottom and went way down the drainage. Fortunately the wider four point and a two point did not make their way with the other five deer. I was hoping they would be down in that pine thicket and I would be able to put a stalk on them. These two deer eventually noticed that they were left behind, they actually fed down the bottom of the drainage looking for those other deer. One of the two points ended up somehow making its way up the hill on the edge of the timber about 40 yards away. Of course I was busy glassing the drainage and did not notice the deer standing there until after he saw me, in which he took off up the hill. So I grabbed my bow and got to the edge of the timber thinking that the wide four point would be right behind him. I got over there and no such luck. I went back to where I was set up to glass and loaded everything on my pack to make the long walk back to the four wheeler. I put my pack on and started back, I was almost at the edge of the timber and I happened to look down and there was the wide four-point. I guess I should’ve waited a little bit longer, I tried to get behind a tree, got my bow out and snuck out from behind the tree but he was gone already. So again I strapped all my gear back to my pack. I thought I may have one more chance for a stalk today, I assumed that the two point that came running by earlier would be bedded in the base and I have to go back through. I crept over the edge of the ridge slowly and surely enough I spotted him right next to the two pines in the middle top of the basin, I have the trees circled in my previous post from yesterday. I ranged him from where I was at 180 yards. There was a rock outcropping 130 yards in front of me. So I backed up so the spine of the ridge was concealing my movements. I popped over and used that rock outcropping to shield me from the bucks eyesight. Worked out perfectly, I was able to peek over and range the deer at 50 yards. I knocked an arrow set my sight at 50. As I drew and popped over the rock outcropping the buck stood up facing me. No shot. He then started to walk to my right and slightly away, I “Maaa’d” at him. He stopped perfectly quartering away, put my pin slightly high on his last rib and let it fly. I watched like it was in slow motion, as the arrow darted towards the deer like a laser beam a buried perfectly into the deer’s chest cavity! That deer did not make it 50 yards before stopping and falling over! So many emotions, I finally got a Nevada full velvet deer!!! And the way I wanted to do it in a high mountain basin!
After a few pictures, it was onto the processing portion and the packing out! Nevada is so steep, I think it rivals hells canyon. Maybe a little worse with what I call alder brush, that bush that grows along the ground super thick and seems to grab your feet all the time! Took 3 trips at 1hr 20min each round trip. Back at camp and loaded up at 5:30pm for the short 3 hr. Drive home. Thanks NV!
Matt 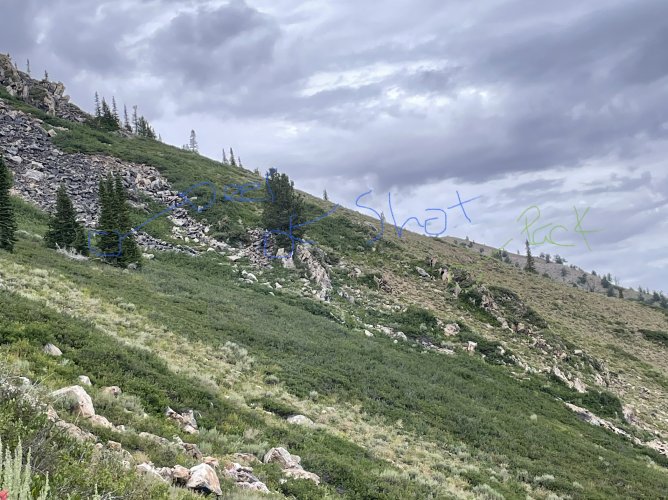 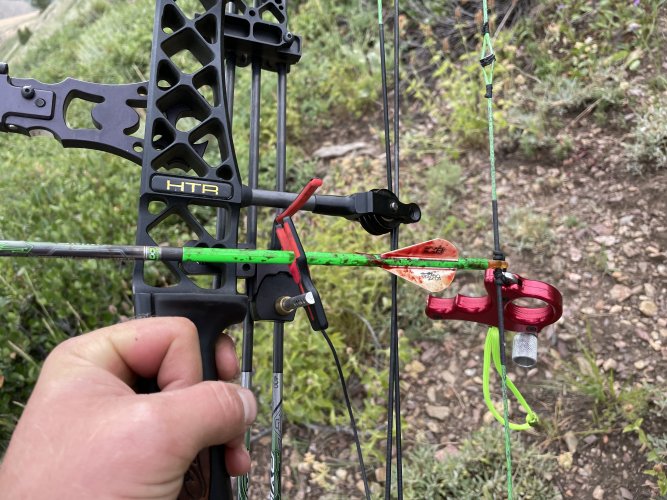 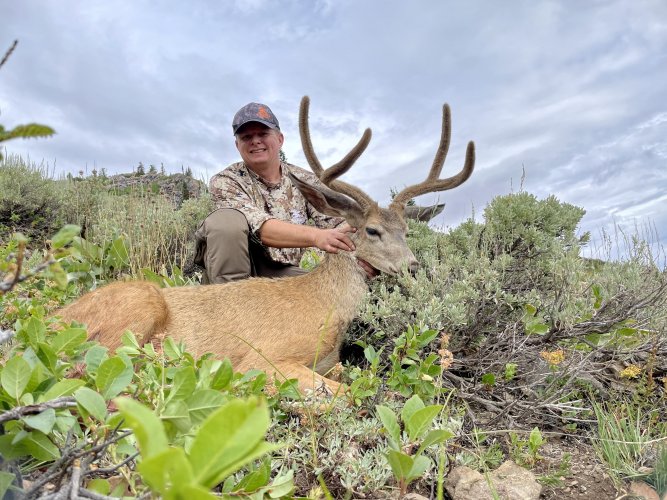 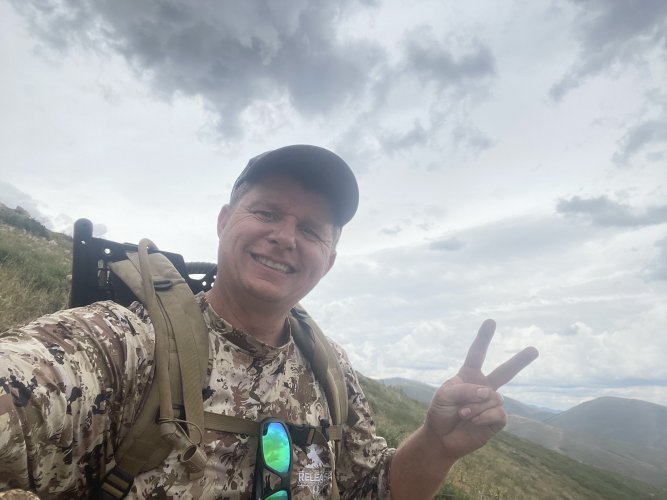 Congrats on achieving your goal! Great write up
You must log in or register to reply here.