While scouting we found a super cool bull on the same ridge. He was a smaller 6x7 tht had a drop antler. His left side dropped straight down and his first point of left blocked the vision in his left eye. His antler ended between his knee and ankle on his left side. 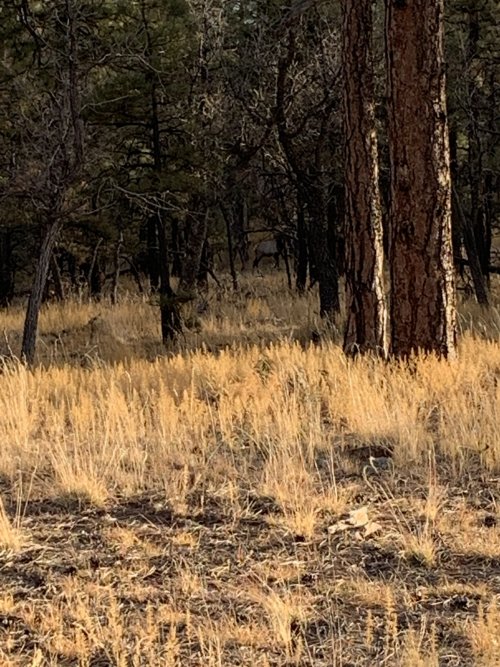 First afternoon on opening day and we found a little mesa that was about 300 yards off the main road. It was surrounded on three sides by roads. It was probably 200 vertical feet and got us great glassing. We had seen a huge 5x6 in the area scouting so we were looking for him. It was so close I almost left the rifle in the truck but was afraid it might get stolen.

We got to a great spot and immediately glassed three shooter bulls. They were a ways off and would stare at every quad that drove by. They were hidden from the roads and the little Mesa got us the altitude to see them. Christian thought it was cool to watch all these people drive by the bulls. It was great to teach him what hiking can get you and how glassing works.

As were were moving to check a few other canyons a series of mistakes cost us an elk. We got up and moved about 100 yards to try and glass the small canyons and a flat where we had seen the huge 5x6.

I heard something to our south and saw an elk butt moving through the trees. I got onto the shorting sticks and a beautiful unbroken 6x6 that was nice (I would guess mid 320s-330s) stopped broadside at 150. I exhaled and did the slow trigger squeeze. It was about as perfect as you can get. Then I heard a very pound snap. I had been so sure we were just going to glass that I had forgotten to put a
Primer in the rifle. He know, total rookie mistake. The bull trotted of and I quickly put a cap in. Christian had the range finder and said 260. I dialed my scope into and did a quick cow called. The bull again turned broadside and I repeated the slow squeeze. Total miss. Christian then told me he panicked and didn’t get the range but guessed. The bull was at 350 yards.

Like a said, a series of bad mistakes cost is a nice bull. We had seen four shooter bulls and had taken a shot. Christian get bad and kept saying sorry. I laughed it off and told him that was elk hunting. We had a great plan for the morning and had a beautiful sunset. 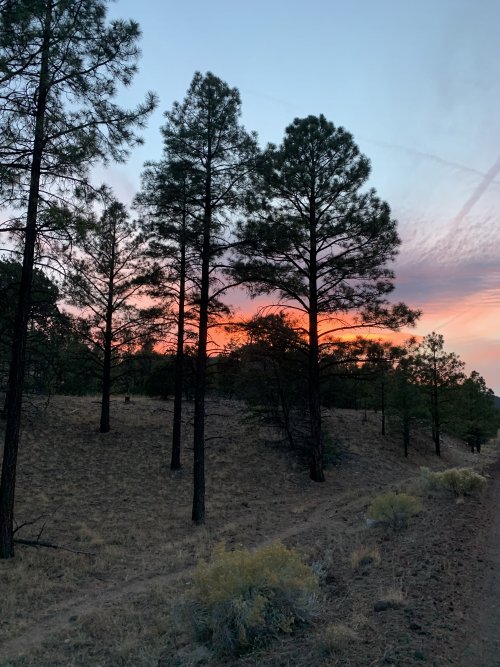 The next morning was absolutely crazy. We started very early and got onto a large mesa where we had glasses the bulls the night before. We watched a bunch of quads and side by sides driving the roads after sunrise. As we moved to the spot we wanted to get to we found two other hunters already there. We had a quich chat and moved off. Christian was sure our morning was over and was a bit upset. I told him we were going to find elk on top and we started still hunting for the far side of the mesa which was about 3/4 of a mile and would allow us to glass the opposite direction of the other guys.

We made it about half way and I saw elk. We stopped and had a small 4x4 and a very nice 5x5 feeding. They were only about 120 yards away and the wind was perfect. Christian was shocked to see them and he had a total attitude change. Christian wanted to pass both bulls…we did after some pictures and teaching about elk behavior.

2nd day of the hunt sunrise and the smaller 4x4 we passed. 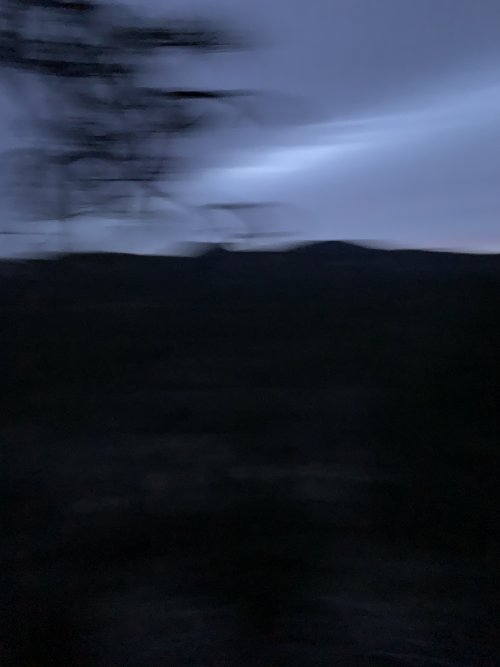 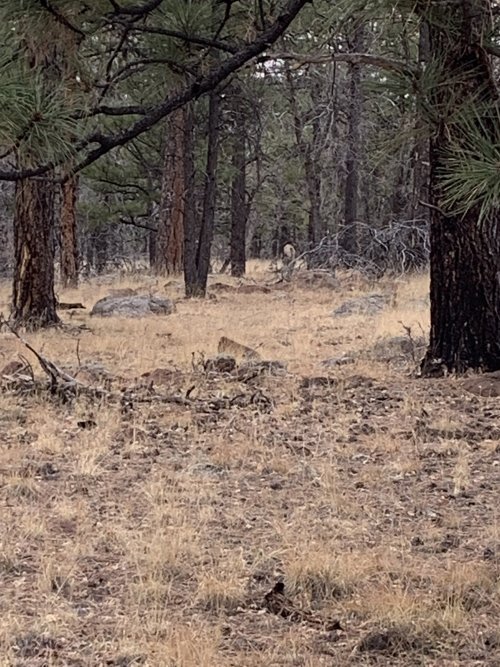 We kept moving across the mesa and Christian spotted three great bulls. The biggest was a 330 class bull that was unbroken. We were moving in on them and had our morning turn south. We were about 600 yards away and we heard four shots within 30 seconds. The bulls started running. We found the hunters and they were over 500 yards away from the elk. They hit the last bull and the two others moved off. The bull bedded as the other two went over the top. The shooter emerged with a flintlock traditional rifle with open sights. There is simply no way he hit that bull with that rifle. They were in a side by side and had obviously used a rifle I. The muzzleloader hunt. Christian knew what he was seeing and asked why they would do that. It was one of throes serious talks about ethics and hunting. We had just passed a very nice 5x5 and then watched this bull get taken by a rifle hunter.

We were only about 600 yards away and watched a total shit show unfold. The guys got to the bull and were giving each other high-fives. They were about three feet from the bull. In the spotter we watched the bull get to its feet between the guys. The “shooter” grabbed the flintlock and actually said how the hell do I shoot this F-ing thing. The other guy was directly across the elk in a cross fire when the “shooter” fingered out how to shoot. The other guy was swearing like a sailor because he was almost shot.

Quickly the high-fives and photos resume. When the shooter grabbed the rack, the bull stood up again. He reloaded his flintlock and shot through the bull towards his friends again. He was using an old time powder horn and obviously loaded too much powder. We could hear him screaming across the canyon about the F-my recoil while his buddies were screaming about almost getting shot again. They were making so much noise several other elk scattered out of the area. Including the 5x6 we had seen.

It was the low point of the hunt for us. The area had been ruined. We saw 11 bulls that morning but the area was ruined.
U

That night we moved back to where we had been opening morning. As we were moving up the ridge to a saddle we could smell elk very string. I told Christian we were going to bust elk and about the time I said it, the biggest bull of the trip jumped up in front of us. He was 350 class and I had him in the scope for about 5 seconds. I could not get a clean shot but he was huge. That was all we saw that afternoon. We were close to elk all afternoon and found several beds were there was still wet pee apots. We could smell them but didn’t see any more. We hadn’t spoke Ike’s any on the ridge but we’re just behind them.
U

The third day was slow. We saw 6-8 cows and a spike in the third day. The opening morn in g ridge had been ruined by a guy. He had never hunted elk and got to the ridge top about 11:00 AM. It was a dedding area and he stayed there until 2:00 PM. He was very happy that he had just moved several bulls from there bed and had taken three shots but had missed all of them.
U

The forth day was great and terrible all in one. In the morning we found a large 6x6 and lost him in the trees as we were stalking in. We saw three additional bulls in the area but they were not huge. That afternoon we hiked to the top of a mesa again. It was crazy steep and again surrounded on three sides by roads.

On the north side we found two big bulls. One was a 330 class. We ended up bumping them but followed them into a canyon. Christian could them in the trees and we watched as night approached. We found several small groups in the same canyon and waited for an opportunity. Right at dark they stepped out in range.

I ranged to spot several times and got the correct range. I can shoot that far, the only real concern was wind. It was cold and almost dark but we had an up canyon wind. I held for a 5-10 MPH wind and took a very stable shot. The shot get good but we had a few issues.

At the shot I lost the bulls in the scope and the smoke obscured the tripod for Christian. We heard crashing but could not find the bulls after the shot. They had taken off but we didn’t know which direction.

This was again a series of decisions/mistakes that I still question. It had been dry all week and I thought we would have a very hard time finding the exact spot in the dark. It had been cold at night.


We decided to back out and come back in the morning to look for a dead elk. 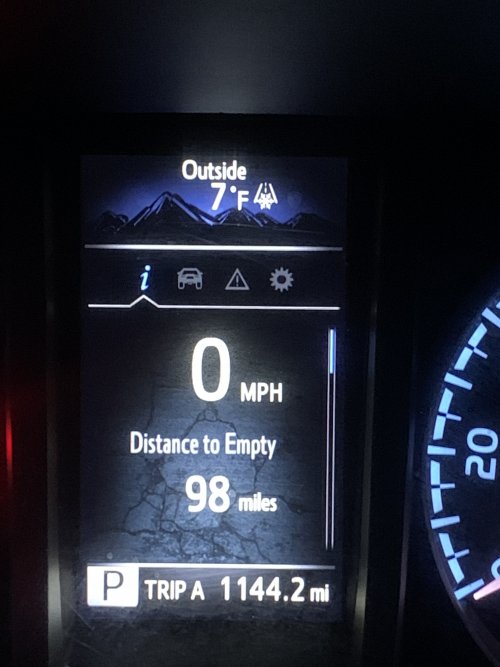 On the way back to the cabin we got a flat. We had to do an emergency tire repair with pugs and fix a flat so that we could drive back to check the shot. The first time of the hunt we got weather. It drizzled for about 10 minutes while we changed the tire. It stopped drizzling and there were no clouds so we thought the weather was over. We finished up around midnight and were beat when we got to bed.

Things went from bad to worse overnight. When Christian went out to start the car, he told me it had rained at night. We didn’t hear it at all. The roads were terrible heading back to the area and we actually got another flat in the rental truck on the way there.

We got to the area about first light and l found not only had it rained, there was two inches of fresh wet heavy snow. It had not been forecasted but we had significant weather.

We did over 5 hours of grid searches and didn’t find the bull. We did have shooting opportunities at three other bulls but we both felt I had hit the bull.

We considered my tag filled and stopped hunting. This is exactly where the bull had been standing. This was as we were leaving after the grid search and about 5 hours after the wet snow melted and light dusting of new snow was left. We had searched four different canyons and couldn’t find any fresh sign. it had been lightly snowing all morning.

It was an awesome hunt and a special thanks to Mike for all the help. Christian had a blast and loved the hunt. We saw a total of 35 branchantlered bulls during the hunt not including the scouting. We hiked over 60 miles in 5 days and had climbed over 400 flights of stairs. These numbers don’t include the time spent scouting.

A couple random pics from the hunt… 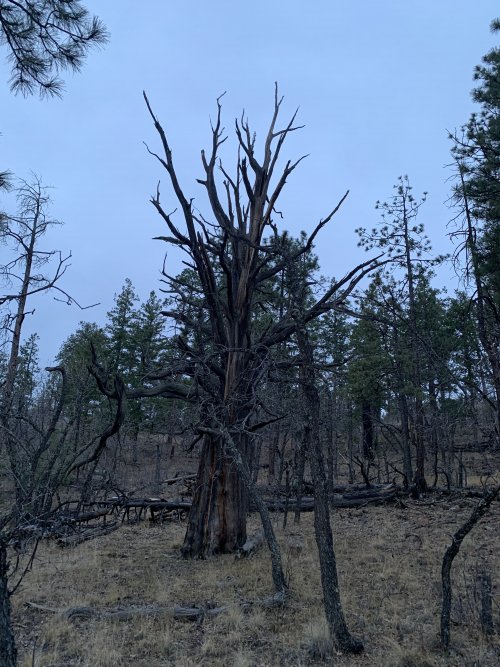 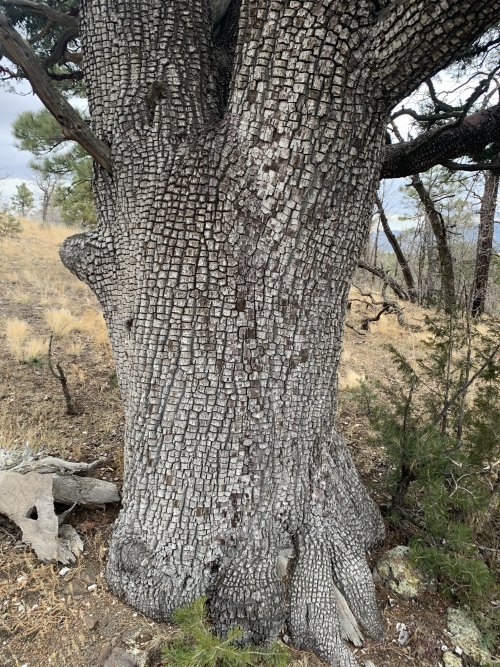 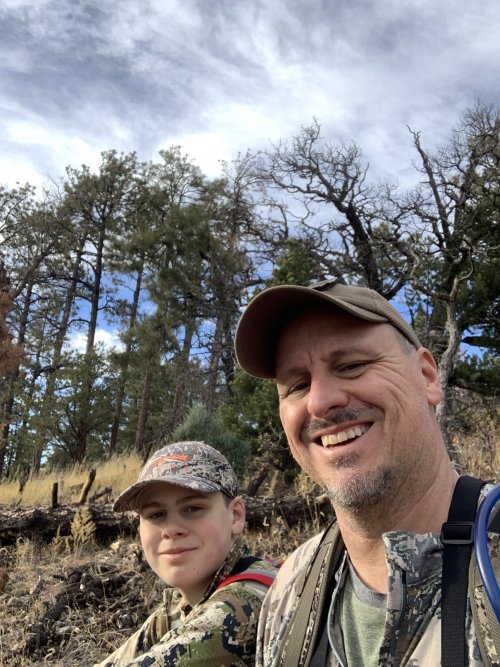 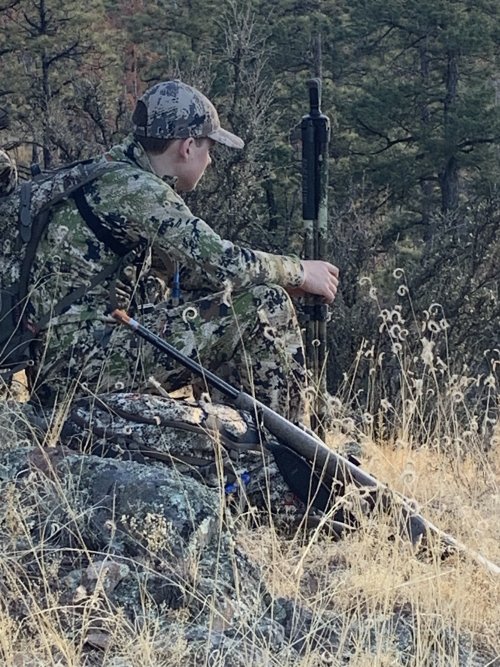 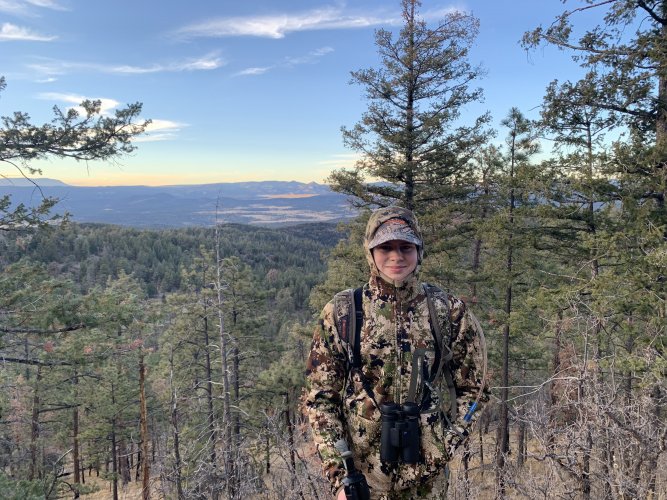 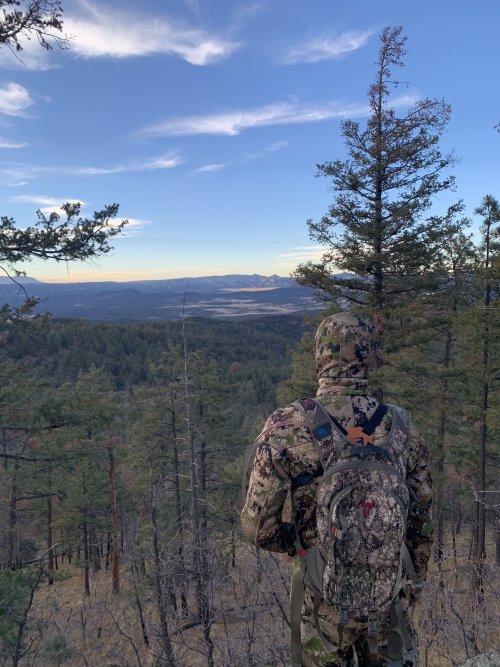 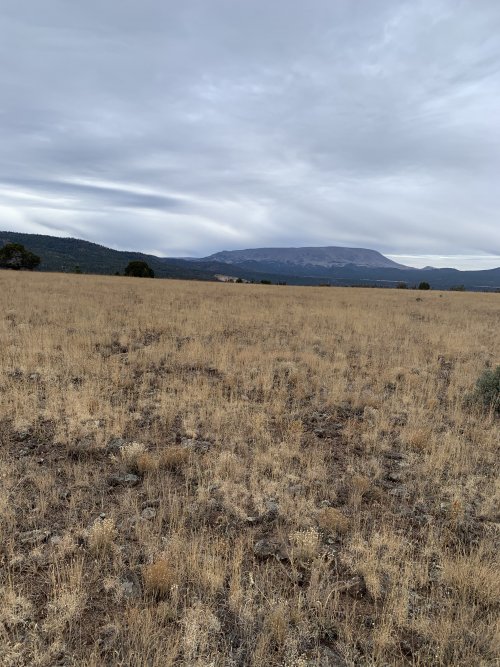 As an added bonus, we were upgraded to 1st class on the way home. Christian’s first time in 1st class and he thinks we should travel that was from now on.

Our next adventure of Hawaii n January and a possible deep see fishing charter is in our future. 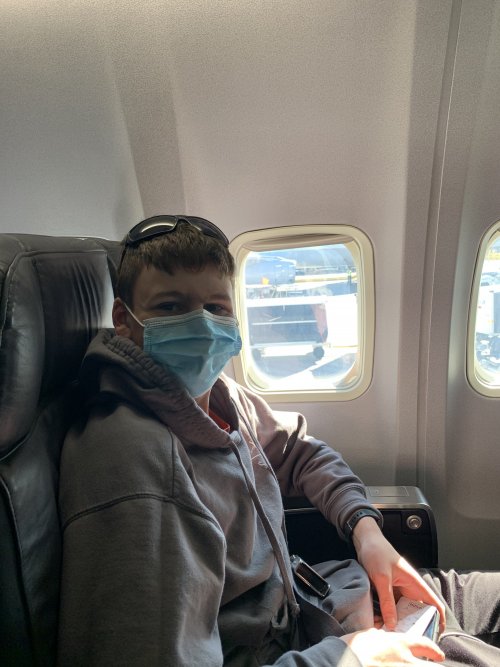 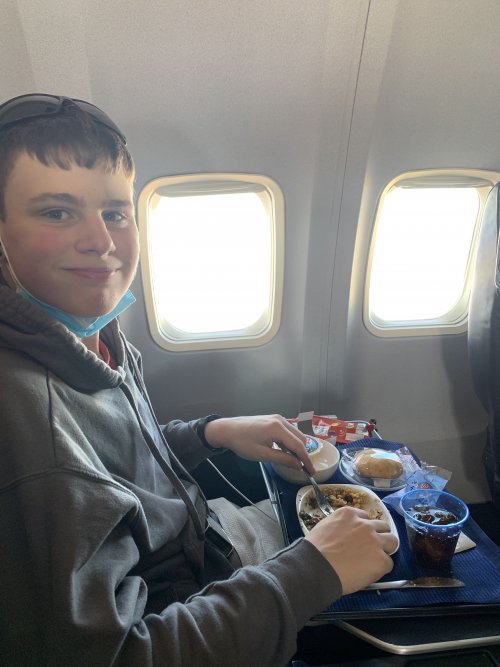 Exciting hunt
You must log in or register to reply here.