I never thought I would draw a "glory tag" I have only ever hunted subpar units and being late to the points games I didn't expect to ever draw a great tag. This spring when results came out I couldn't believe it when my account said successfull for archery elk I figured I made a mistake on my application but the hunt code checked out and i had gotten very lucky.

I was super excited but also for some reason worried that I wouldn't do the tag justice. I have only hunted elk 1 other time and it was a late season hunt where I only hunted a half a day before getting one. I was thankful for getting an elk early but honestly didn't learn much besides they are a big animal to get packed out. I was considering going with an outfitter and I posted a thread seeing info on what others would do. I got lots of good feedback and went with my gut and went without an outfitter. I liked the thought of having a better chance at getting a giant but to me I would be more proud of a bull that my brother and I get on our own. Besides the fact that its way cheaper! We decided to do like we always do and give it our best shot.

Most of my spare time,which I seem to have little of, this summer was spent researching and gathering as much information on the hunt as I could along with shooting practice and learning how to elk call. I got lots of good information from people that had hunted it in the past.

I can tell this already long winded and most people have probably already scrolled down to see if there are pictures. That's what I would do!

Day 1 we arrived to the unit the day before season to scout and find a place to camp. My brother found 2 sheds to hang up in tree at camp for good luck. 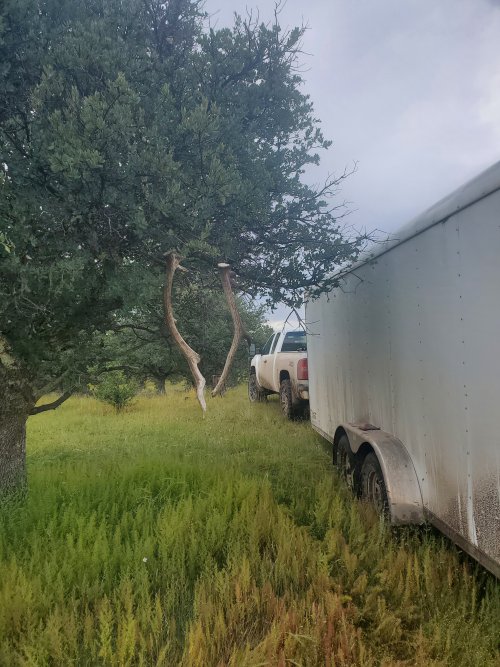 Day 2 opening day we decide to climb the highest mountain near us and get rained on for a few hours which was not fun. My brother's boots were like sponges and his feet got pretty chewed up. 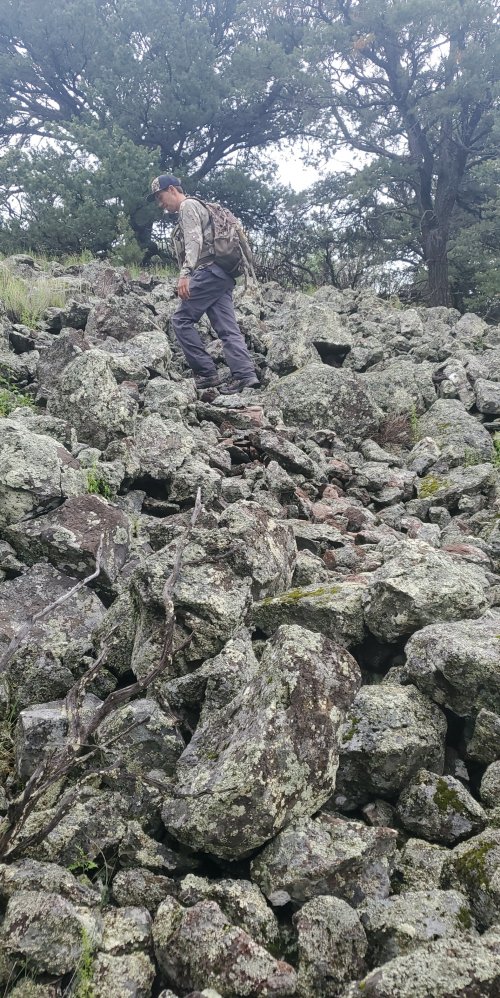 After taking a nap in the rain we started to walk again to try to warm up after about 15 minutes we came across a black bear at about 80 yards that got our blood warmed up!
With still no elk spotted and not alot of fresh sign we were questioning the area we were hunting.
We slowly started back towards the side by side glassing along the way. At 530 we finally spotted the first elk and he was a good one. 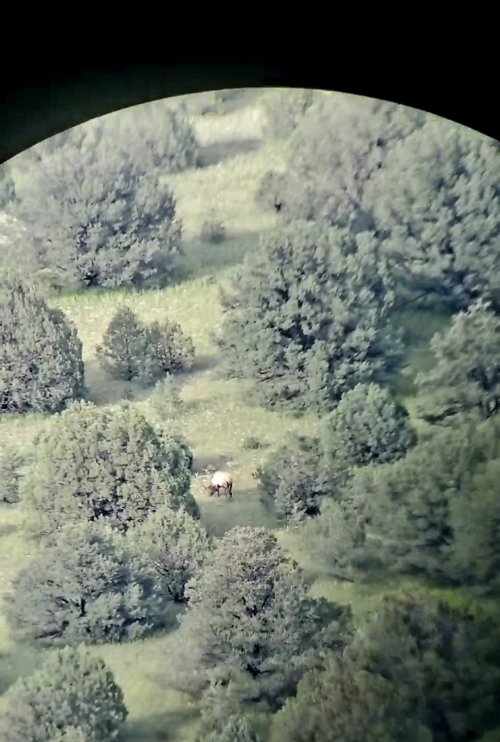 Being late in the day we decided to not pursue but continue glossing and go after him in the morning. We glasses up 2 more bulls close by and abut 15 or so cows a couple miles closer to the trail.

Day 3
Elk hunting is easy? I would have said this if I had taken my time and put a good shot on a bull this morning.
We were going to take a different trail in on the side by side so we would have to walk so far but the road was cut off and blocked by private. This delay put us way behind schedule but with a heavy fog we were able to get where we marked the bulls the previous night without scaring anything off.
We set up right where we had marked on the map and brother began calling. He was immediately responded to by a bull that was very close. The bull came in on a rope and instead of taking my time I for some reason rushed the shot and the arrow went high and forward. The bull jumped a bit and slowly walked off through the trees and bugled about 70 yards out but My heart instantly sank and couldn't believe what just happened.
We walked to where he was when I shot and found the arrow which was about 5 yards from where he was when I shot and it revealed no blood on it but the broadhead broke off at the threads. We then sit there in dis belief trying to figure out how I screwed this up. We give it 2 hours and start to follow the tracks we find some blood after about 50 or yards and have a blood trail that went about 30 yards. We are then on our hands and knees looking for blood and my blood tracking machine brother was able follow pin drops of blood from his hands and knees for maybe another 30 yards. We then are literally crawling around trying to find another drop for well over and hour and we find nothing. We give it some more time and start grid searching walking 30 yards apart covering about a 3/4 mile square the rest of the day. We turn up nothing no bed no blood nothing. It gets dark and back to camp we go. We are quite positive it was a non lethal shot but still is a terrible feeling. 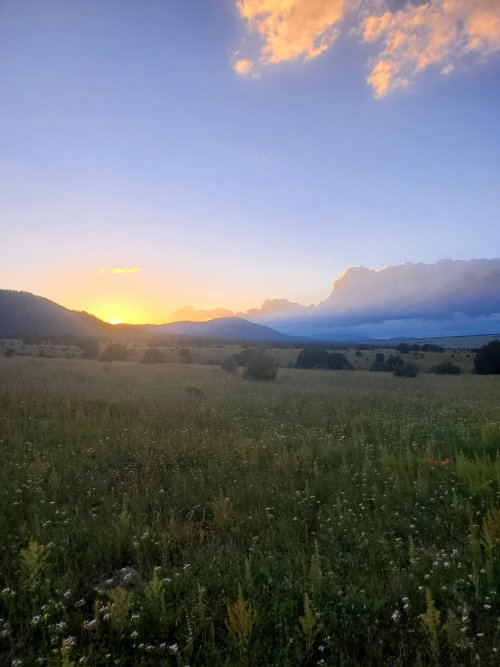 Day 4
Back to the area we searched the day before. We are walking all the somewhat near by drainages with no luck. Trying to not be distracted by near by bugles and wondering if they are coming from the bull we are lining for sucks. We gain some elevation and try glassing the area to see if we can locate him. No luck on that front either.
By mid afternoon we are (right or wrong but) all but certain the bull isn't fatality wounded. Still feeling guilty but not knowing what else to do we start going in the direction of the bugles we are hearing to see if we can get on a bull. We get winded by some cows and never get to see the bull. 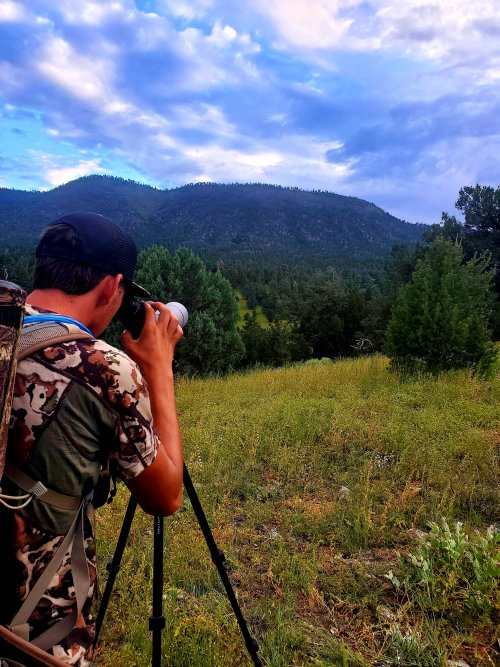 Late in the evening we glass up a couple bulls but it's too dark to tell if they are big enough to pursue or if one happens to be the one I hit the day earlier. Back to camp we go not sure what to do except go back in time and make a good shot.

Day 5 back to the same area. A couple bugles in the dark we get in close and then all is quite. I think we have the elk on high alert in this area because we have been walking all over searching for signs of the elk I hit on day 3 and dealing with constantly changing wind. We finally convince ourselves we should hunt for different elk and check out a different side of the mountain.
We take a long side by side ride to the other side and climb to the top late in the evening had one close encounter but wind shifted and he took off before we got to actually see him. 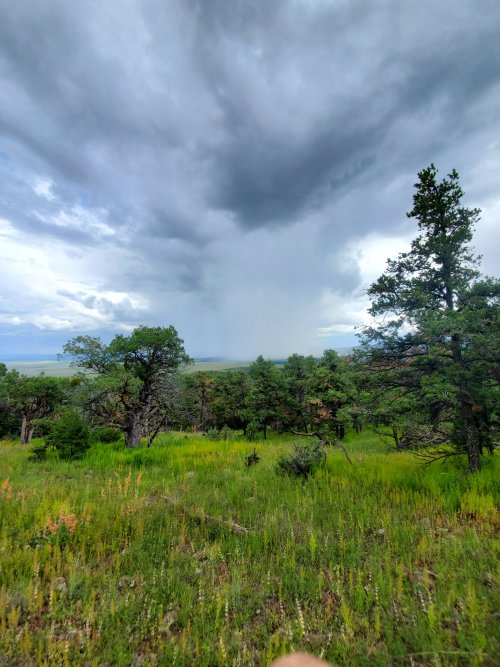 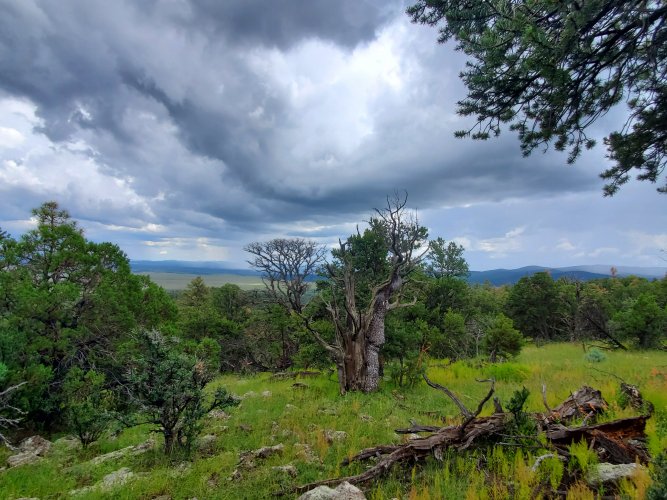 We planned on hunting the whole season if need be but it's already been a week since we left home. I am missing my boy (2 years old) and his mom says he is missing me to. My dad was also ready for us to be home sooner then later since he was taking care of all the extra farm work that me and my brother normally do. I decided I'm not going to be to picky given the circumstances.

Day 6
As soon as we step out of the trailer in the morning to get ready for the day we hear 2 bulls close camp bugling aggressively. We decided to head after the one. We finally get in fairly close shot 120 yards and start calling. The bull immediately responds but he won't come in. I start sneaking my way towards him i get to about 60 yards and get set up. My brother continues calling but doesn't realize I have moved so far so he is still calling from roughly the same spot. The bull finally gets bored and walks off. I didn't get a great look at him because there was lots of brush but appeared to be a solid bull.

We then head up the mountain to try to see if we can relocate the bull or any other elk.
We walk along the top of a drainage and we decided we might as well let out a bugle to see if anything responds. To our surprise a bull screams right back probably 200 yards away. We move his direction and quickly get set up he comes right in and at 12 yards I take the shot.

The arrow flys through both lungs and bull doesn't know what hit him.He stops about 20 yards out and if I wouldn't have decided to put one more in him he would have dropped right there. I decided to take another shot and he runs down the drainage about 70 yards and is dead. 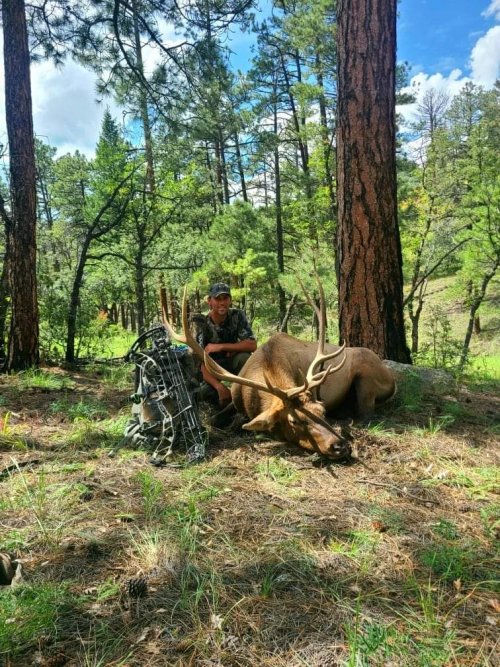 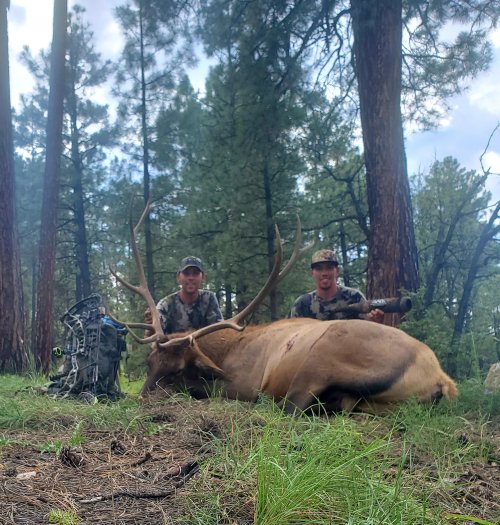 Now the work begins! By the time we get him cut up it's getting close to dark and we have a long walk back. We hand the rest up in trees for the night. We finally have fresh elk meat to cook at camp and it was delicious!

Day 7
We get up to pack the last 2 trips out and get all of the meat out in the freezer and and start getting all our stuff packed up and it's time to head home. 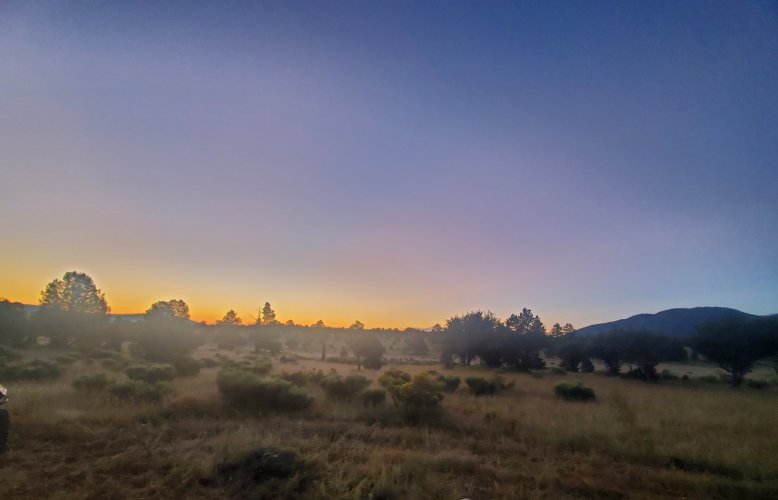 Lots of ups and downs but we had a great time and made memories we will never forget.

Great bull, glad it worked out for you sounds like a great trip!
T

Congrats. Awesome hunt. Thanks for sharing

Awesome stuff—congratulations on a great bull. All that green makes it look like you were elk hunting on a tropical island.

I always try to fight the urge to scroll down and look at the pictures first... It usually doesn't work
W

Beautiful bull and great write up. Congratulations!
What state was this?

Wallydeuce said:
Beautiful bull and great write up. Congratulations!
What state was this?
Click to expand...

Thank you we were in New Mexico

Congrats! Heck of a way to kick off your elk hunting career!

Thanks for sharing.
Z

Do not have skills yet to use bow for me.... nice work!
M

Great story and thanks for sharing! Congrats!!
You must log in or register to reply here.